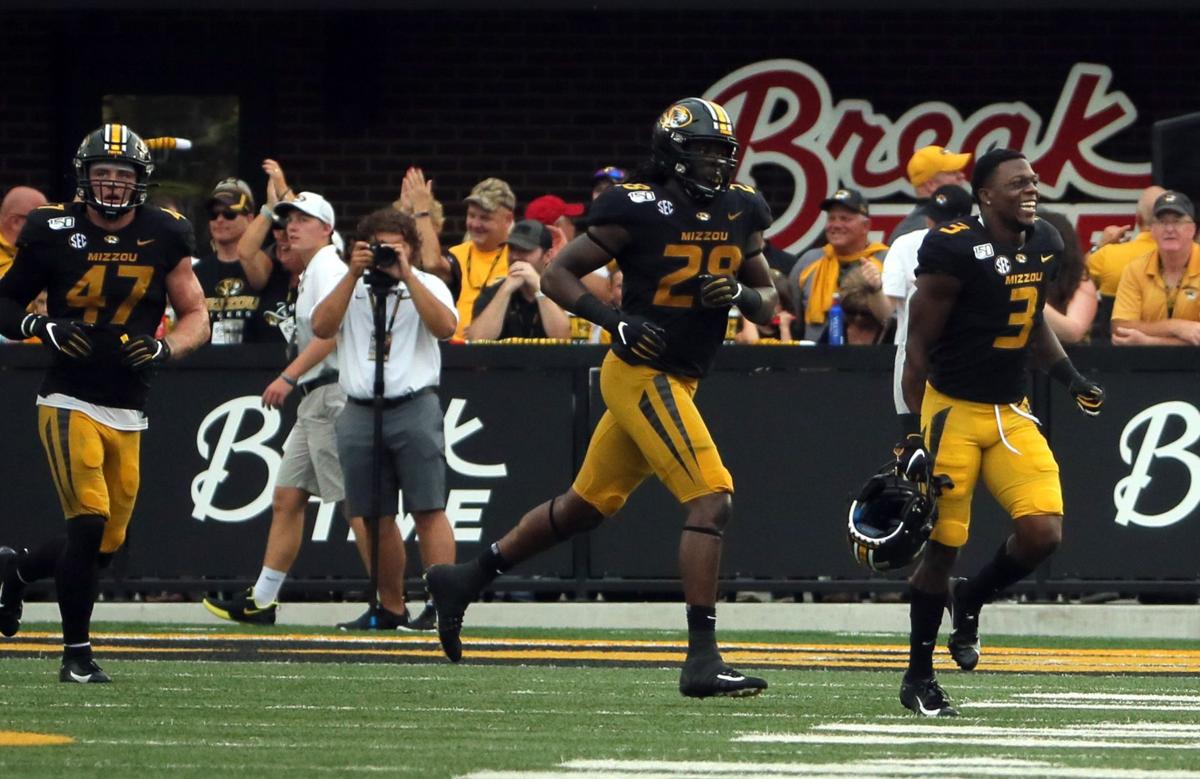 Missouri Tigers safety Ronnell Perkins, right, runs off the field after he scored a touchdown on an interception during a game between the University South Carolina vs University of Missouri at Faurot Field, at Memorial Stadium in Columbia, Mo. on Saturday, Sept. 21, 2019. Photo by David Carson, dcarson@post-dispatch.com 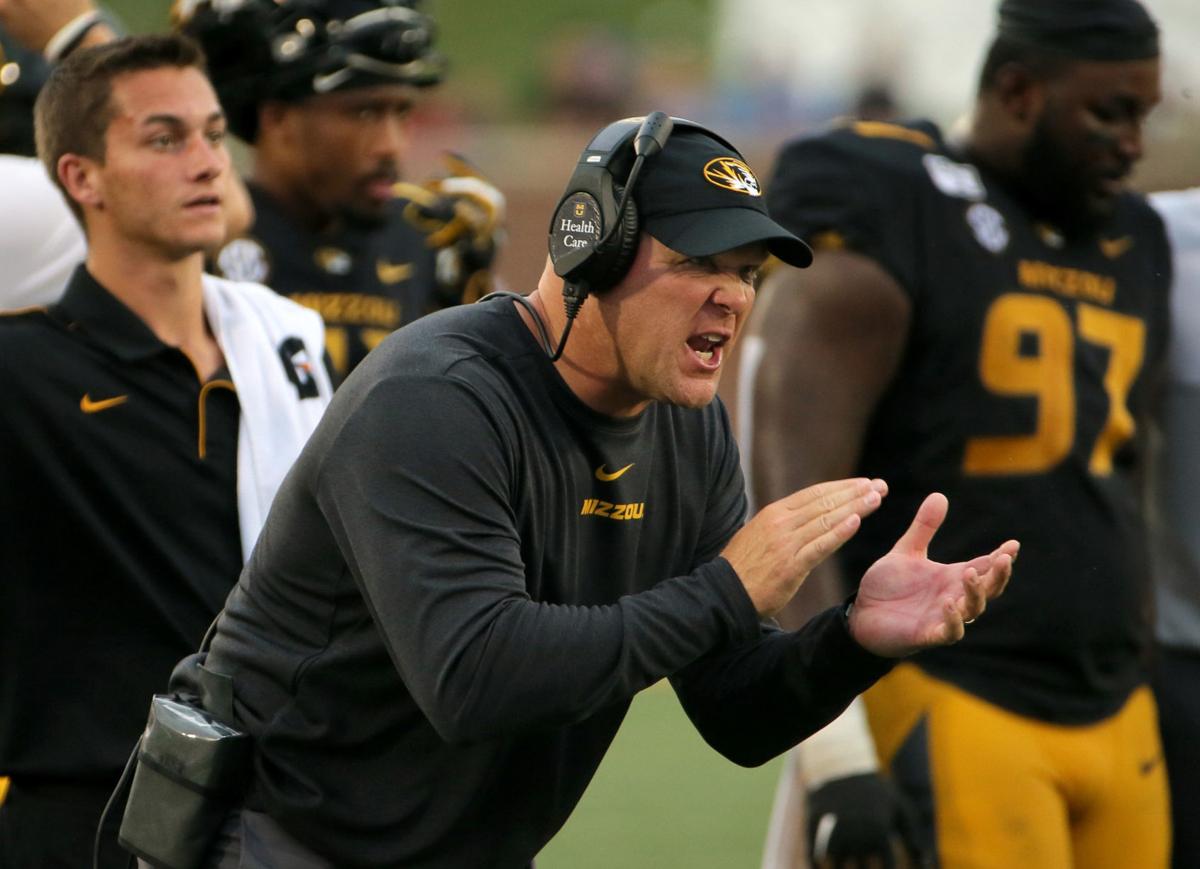 Missouri Tigers head coach Barry Odom cheers on this team during a game between the University South Carolina vs University of Missouri at Faurot Field, at Memorial Stadium in Columbia, Mo. on Saturday, Sept. 21, 2019. Photo by David Carson, dcarson@post-dispatch.com

COLUMBIA, Mo. — Before Mizzou’s Ronnell Perkins saw it in the opposing quarterback’s eyes . . . before Perkins then felt the football in his hands and, 100 yards later, smelled the end zone … and before all the Tigers could taste victory, Mizzou coach Barry Odom first heard it in his ear.

It was the voice of Mizzou defensive coordinator Ryan Walters.

“After he made the call in the headset,” Odom said, “you could feel he had very strong conviction.”

Saturday’s pick-six was the biggest defensive play of the game, in the biggest win of the season. Walters had an intuition that Mizzou’s 4-2-5 defense could create havoc with this specific zone defensive call.

“And you talk about momentum, man,” Odom said. “Ryan made a heck of a call. If they scored it would’ve been a three-point game.”

Instead of leading by three — with about five minutes left in the third quarter against South Carolina — Mizzou led by 17.

It was the triumphant play call in what’s been a vital turnaround for Mizzou’s defense. The offense is going to put up points, we know this. But if Mizzou’s defense doesn’t create turnovers, as seen in the embarrassing loss at Wyoming, winning will be tough in college football’s toughest conference. But in their first conference game of the year, the Tigers created three turnovers, including Perkins’ pick-six interception from his own end zone.

This defense is growing — and it’s growing on its fans and the media who watches it.

South Carolina had marched valiantly down the field, all the way to Missouri’s 3-yard line. The Tigers’ led 24-14, so a touchdown would’ve cut the Mizzou lead to 24-21. But Perkins caught the Ryan Hilinski pass and zipped 100 yards to the other end zone.

“They were getting ready to score,” said Perkins, a St. Louis native who went to University City High School. “It probably would’ve been a whole different game if I didn’t do that.”

He’s right. If South Carolina scored there, one wonders how the game finishes. The battle of the schools from Columbia often becomes wacky. Perkins said that the Tigers often “let them off the hook.” Odom was 0-3 against the Gamecocks, thus he’d never hoisted the Mayors’ Cup. But on a defense with some budding studs, it was a fifth-year senior who had never intercepted a pass who hauled in a biggie.

“It’s very rewarding,” Perkins said of his interception for a touchdown. “I put the work in, and the coaches know that. … It’s just who I am, I never give up. When something tough comes my way, I like to put my head down and prove myself. Prove that I belong — and that I’m a play-maker.”

As for the defensive set-up that Walters called, the Tigers had run it in practice, but Perkins said “it was a first time ever calling it in a game. It’s a great play that we use — we zone off the quarterback, we read the quarterback’s eyes. He just looked right at me, we were looking eye-to-eye, and I was like, ‘Ooooh, you’re going to throw that to me.’ I almost dropped it — glad I didn’t. … He threw it right to my chest. … You don’t think it’s going to be that easy.”

No. 3 for South Carolina threw it right to No. 3 for Missouri. Perkins sensed a receiver coming into his zone, but Hilinski’s eyes spoke to Perkins. With the receiver behind him, standing in the painted “O” diamond in the north end zone, Perkins caught the pass right at the front tip of the diamond.

“Man, my vision got a little blurry there,” he admitted as he ran and ran and ran. “I just tried to go as fast as I could to get the touchdown.”

He galloped down the left sideline, while defensive end Jatorian Hansford basically ran to his side, making sure no Gamecock tried to affect the game-changing play. South Carolina tight end Kyle Markway, a fellow St. Louisan from Vianney High, tried to keep up. He had actually made numerous key catches on the drive. But he couldn’t catch Perkins.

“I could’ve gone another 300!” Perkins said of the 100-yard run. “I wasn’t tired at all. My adrenaline was just rushing, and I just wanted to get to the end zone. As a defensive player, you don’t get your hands on the ball a lot, so when you get it, you got to show them what you’ve got. … I’m a hometown kid. Growing up I watched Jeremy Maclin, Chase Daniel, Markus Golden, Sheldon Richardson. It’s a dream, man. It’s a dream to come here and play. It’s a dream, and I’m just living it.”

His dream made history. His interception return for a touchdown was the longest in Mizzou football history. It was just the seventh 100-yard scoring play in program history.

“Since I’ve been here, coach Odom has emphasized — when you win the turnover margin, you win the game,” Perkins said.

“There was a lot of relief,” linebacker Cale Garrett said of Perkins’ play. “That was a 15-play drive, and I was breathing pretty heavy after that. I just blocked the intended (player) and said, ‘Go Perk!’ I ran down and celebrated eventually. But I was a little bit slower getting down there as he was.

'This is not a political thing,' Cardinals ace Jack Flaherty says. 'It's a human rights thing.'

Cardinals veterans such as Wainwright, Fowler and Carpenter speak about accountability away from the field.

'This is not a political thing,' Cardinals ace Jack Flaherty says. 'It's a human rights thing.'

Hochman: Blues have variables to win the Stanley Cup in bizarre postseason

Yes, captain Alex Pietrangelo and the St. Louis Blues have the ingredients to repeat as Cup winners. No, it won’t feel like last year’s.

Hochman: When it comes to race and races, NASCAR’s Bubba Wallace shows class

A look back at President Donald Trump's tweet and the NASCAR driver's response.

Hochman: The lessons and legacy of coach Ed Crenshaw live on in 2020 St. Louis

Missouri Tigers safety Ronnell Perkins, right, runs off the field after he scored a touchdown on an interception during a game between the University South Carolina vs University of Missouri at Faurot Field, at Memorial Stadium in Columbia, Mo. on Saturday, Sept. 21, 2019. Photo by David Carson, dcarson@post-dispatch.com

Missouri Tigers head coach Barry Odom cheers on this team during a game between the University South Carolina vs University of Missouri at Faurot Field, at Memorial Stadium in Columbia, Mo. on Saturday, Sept. 21, 2019. Photo by David Carson, dcarson@post-dispatch.com