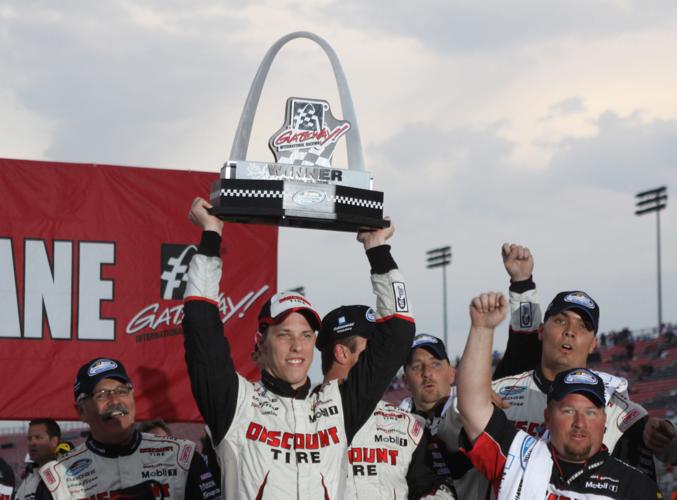 Brad Keselowski, who has gone on to Cup Series prominence, hoists the trophy alongside his pit crew after winning the 5-Hour Energy 250, a Nationwide Series race on Oct. 23, 2010 at Gateway International Raceway. The track, in Madison, now is known as World Wide Technology Raceway and this year will have a Cup series event for the first time, on June 5. 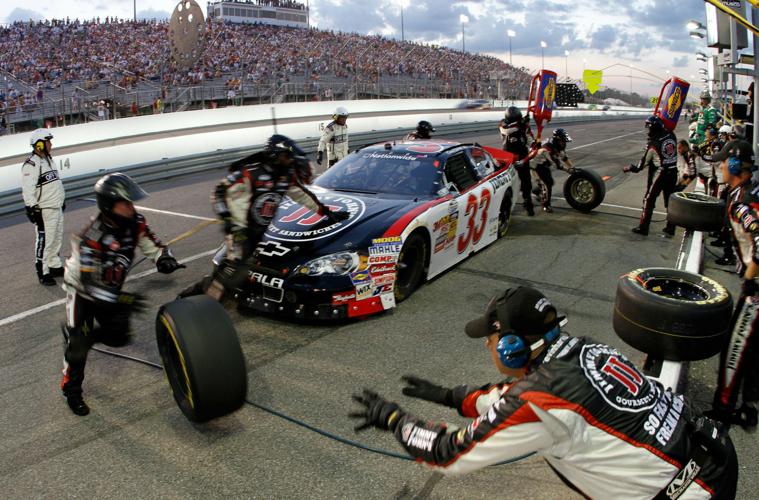 The best quality of the folks at World Wide Technology Raceway is, fittingly, drive.

Led by owner Curtis Francois, they have worked diligently, passionately and creatively to grow the track’s presence in racing.

And the culmination will be revealed Wednesday — a news conference at Ballpark Village to announce that a NASCAR Cup Series race is coming to the track just across the Mississippi River in Illinois, beginning in 2022. Multiple sources confirmed the reports to the Post-Dispatch on Monday.

The Sports Business Journal previously reported, per unnamed sources, that St. Louis was expected to get a Cup race, and that Pocono Raceway in Pennsylvania would lose one.

Told of the news Monday night, retired NASCAR driver Kenny Wallace — a St. Louis native and local racing legend — texted: “This is a really big deal for St. Louis and the surrounding communities. … Our Wallace family grew up racing cars in a ball-and-stick town. Very seldom did we get a lot of love for auto racing. I feel like I’m living a good dream to hear the NASCAR Cup Series is coming to St. Louis. The Cup series is the highest division of motorsports in America.”

NASCAR in St. Louis. How cool does that sound?

And even if you’re not into racin’ — and the only Jeff Gordon in your life is the Post-Dispatch sports columnist — this news still is categorically cool, because it’s good for St. Louis. Money will be pumped into the economy on both sides of the river (the track is in Madison). And it’s just the latest great sporting event to arrive in our city since the Rams left.

Deemed unworthy of the National Football League by certain league executives, St. Louis continues to show up to events that actually want to be here. The 100th PGA Championship at Bellerive in 2018 had one of the larger crowds in that tournament’s history. The XFL’s St. Louis BattleHawks were by far the league’s attendance leaders. The US Gymnastics Trials and the NHL All-Star Game were considered great successes.

And just this past weekend, at the Ascension Charity Classic, the event at Norwood Hills Country Club set an attendance record for a first-time tournament on the PGA Champions Tour — 51,000 total. The golf event returns for the next three years, but Ascension executive vice president Nick Ragone said Monday: “The way this community has taken to this, we hope it’s in perpetuity. …

“The players have said that this felt like a PGA Tour event, because that’s the community, that’s St. Louis, that’s the fans, that’s the sponsorships, that’s the hospitality. That’s civic engagement, that’s all of that. And that’s something we in St. Louis have always known — that we were going to exceed expectations. And I think it’s a great reminder. We keep reminding the country with the PGA at Bellerive, with the Blues, with the Cards and now with soccer. We keep reminding the country that we have such an amazing, unique story here in St. Louis.”

In a 2019 interview with Francois, the savior of St. Louis auto racing said: “I think that any sanctioning body, including NASCAR, is going to look to see if there’s fan energy there and community support. And community support comes from the people in the community, but also from the business community. And events like this show that St. Louis demonstrates those things — and in a big way.

St. Louis will have to brush up its “Shake & Bake” and other NASCAR references before next summer. We have some time to learn all about everything and everyone from the St. Louis racing Wallaces to Bubba Wallace, Kurt Busch to Kyle Busch, Denny Hamlin (first in the Cup Series standings) to Derrike Cope (last in the standings).

Some of us already are experts. Some of us will grow our knowledge base. And some of us, well, will just be along for the ride. Because that’s the thing — it’ll be a unique St. Louis experience. Just being there will be worth the price of admission. It’ll be one of those events you’ll want to say you attended.

Stu Durando of the St. Louis Post-Dispatch contributed to this report.

Hochman: Blues got the loss they deserved. Here's what they should do for Game 2

Hochman: 'I'd be shocked if anyone swept.' Why the Blues-Avalanche series should go deep.

“We're going to have to play heavy — we're going have to control the play in the offensive zone as much as possible,” Blues coach Craig Berube said.

DENVER — Craig Berube coaches as bravely and boldly as he played.

Hochman: ‘They pick you apart.’ Avs’ offense dominates, but Blues’ D is better than last postseason

The Avalanche has the advantage against St. Louis. And home ice. But this series sure seems like it’ll be more of a series than last year’s series.

This could still be a long series. But that will only work if Berube and the boys make adjustments — be it to the lines or their approach.

Hochman: The Blues' Bortuzzo embodies the toughness needed to succeed in the playoffs

Hochman: Except for minor detail of him being an opponent, Blues fans should appreciate Makar

“Paul Coffey got up the ice like Makar,” Berube said. “You know, Paul Coffey was one of the D-men that picked the puck up behind his neck and pretty much would take it the whole way."

The Blues shouldn't have to face a team this good in the first round.

“That's who he is,” said Frank Bennett, Tatum’s coach at Chaminade, after the Celtics’ Sunday win. “He obviously can score at a high level, but he's going to make the right basketball play for his team."

Hochman: In first-round win, Blues' confidence and cohesion overcame all adversity and adversaries

It takes a team. And beyond the nine 20-goal scorers and the stat stuff, this is a team of role players, unselfish players, hungry players.

Brad Keselowski, who has gone on to Cup Series prominence, hoists the trophy alongside his pit crew after winning the 5-Hour Energy 250, a Nationwide Series race on Oct. 23, 2010 at Gateway International Raceway. The track, in Madison, now is known as World Wide Technology Raceway and this year will have a Cup series event for the first time, on June 5.