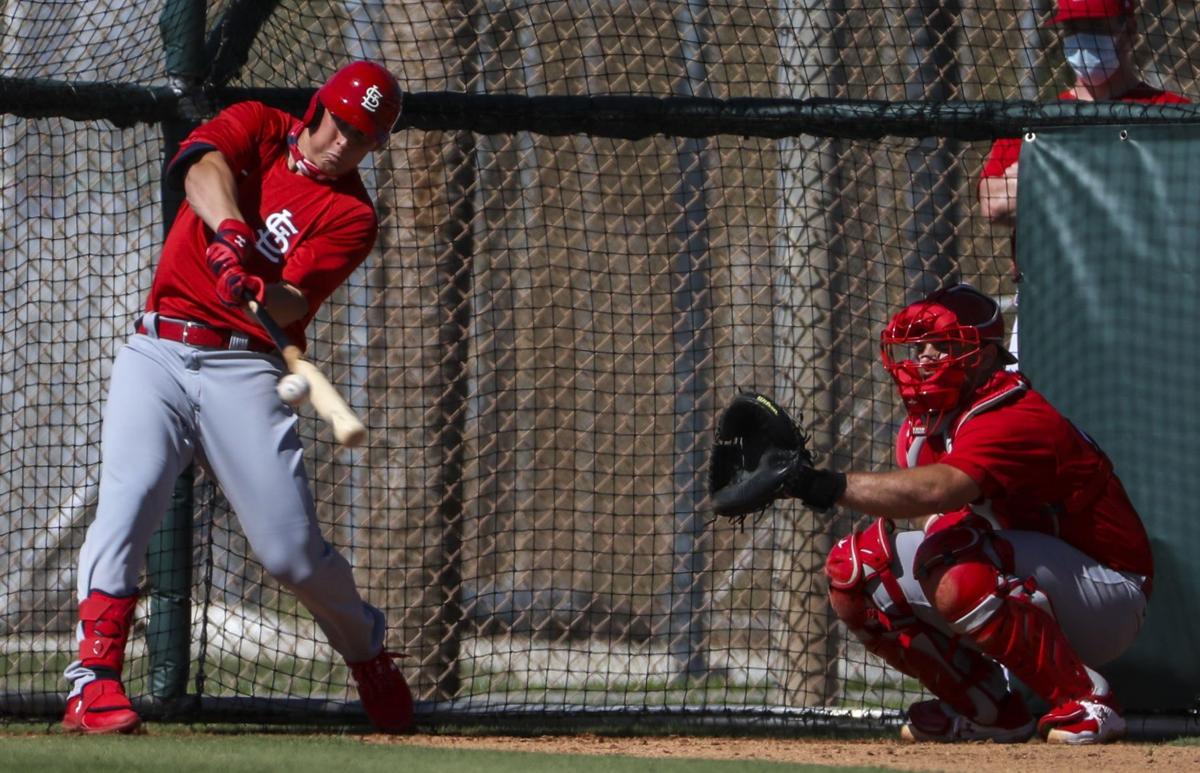 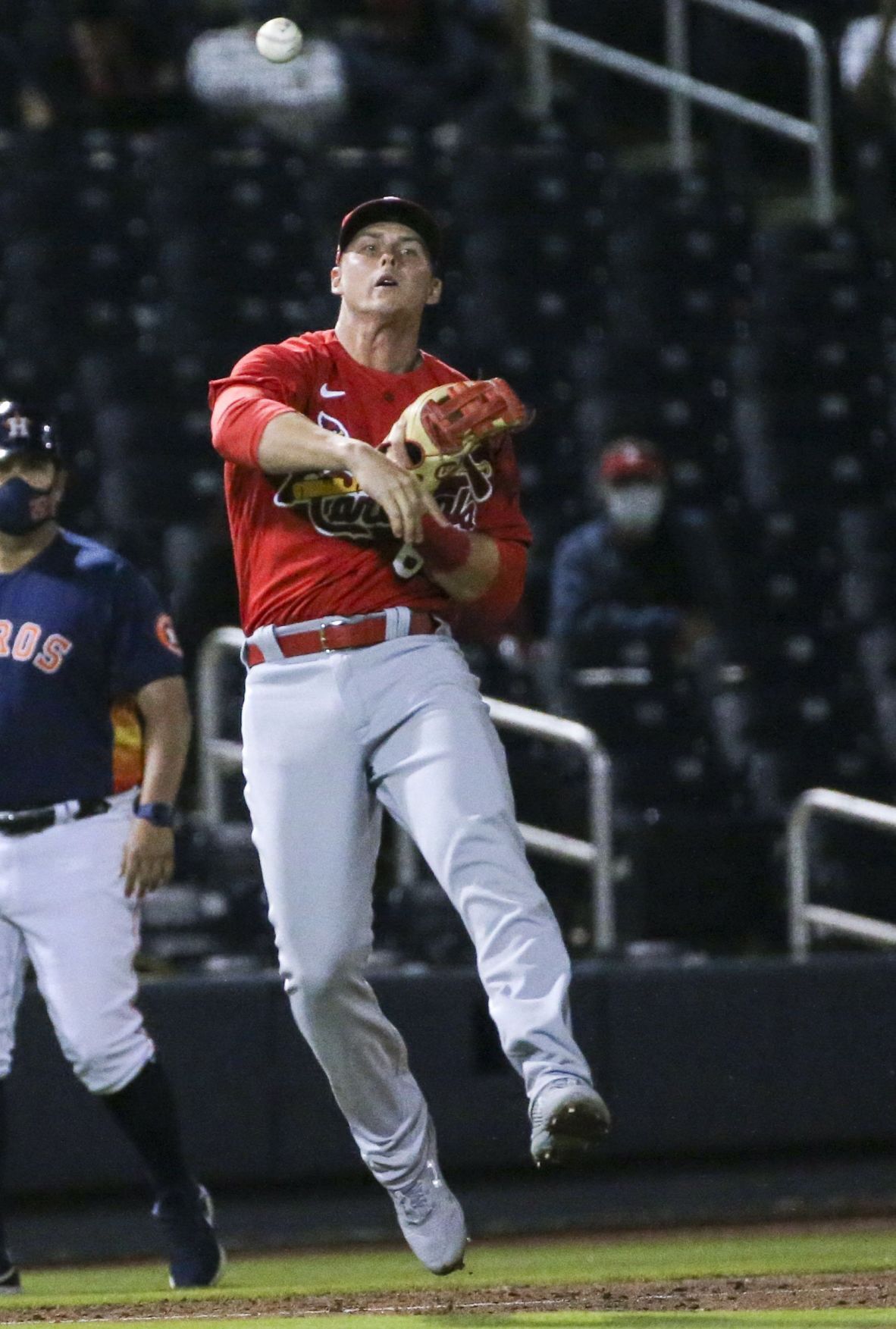 Nolan Gorman could wind up in a platoon at second base next season, or even be the starter if certain roster moves happen.

With apologies to Adam Wainwright, the biggest curveball in the Cardinals organization is Nolan Gorman … and how the kid could alter the roster, the lineup and the 2022 trajectory.

Born 26 days before Wainwright was drafted, second baseman Gorman could be teammates with the pitcher at some point next year. In fact, as of now, the Cards don’t even know if he’ll start the season with Memphis or St. Louis.

But wait, wouldn’t bringing up top-prospect Gorman cut into the playing time of the reigning Gold Glove winner at the position?

And that could be a good thing.

Tommy Edman provides some production, sure. Only Bryce Harper (42) had more doubles in the National League than Edman (41) this year. And Edman turned a bunch of singles into “doubles,” too — he stole 30 bases, trailing only Trea Turner (32) in the NL.

His lefty swing is a beautiful brushstroke upon a green canvas. And Mozeliak said Gorman’s glove game is better than expected at second, following the move from third when another Nolan showed up. Some fans don’t love platoons — and surely players don’t love platoons — but it would benefit the Birds to get to this second base platoon soon.

To start 2022, Gorman could play a couple weeks or even months in the minors. But Gorman, who turns 22 on May 10, has answered the bell at every level. Last year, at Class AA and AAA, he combined for 25 homers in 480 at-bats.

“I think the most important thing you want to see out of a player is — do they understand their strike zone?” Mozeliak asked. “Are they able to have some level of success every time you promote them? Ultimately, you’re hoping those trend lines time well with when you’re thinking about big-league opportunity. So in his case, one of the things that that we’re cognizant of is his strikeout rate. He did bring that down significantly at Triple-A, which was super-encouraging.

“His walk rate did go down, as well. But someone who is 21 years old, playing at Triple-A and having close to just under an .800 OPS is something to be excited about. And clearly, in his 200 plate appearances at Double A, he performed at a real high levels. You sort of combine all of that and that’s great. From an offensive standpoint, we’re really encouraged with what we’re seeing. And I think playing the new position is also something that he’s made a pretty seamless transition to. Hearing from (renowned Cards infield instructor) Jose Oquendo on what you’re seeing on defense is exciting, as well.”

The question, though, is if Gorman is your only offensive addition, is that enough to win the division? I still believe the Cardinals should sign a shortstop. Preferably one to a shorter deal, though most studs hitting the market in their prime are looking for, you know, the biggest deal ever.

Maybe a potential labor stoppage could strategically help the Cardinals in this regard. If there is only a short window to sign guys before the 2022 season, maybe a free-agent shortstop jumps at a short deal with bigger per-year bucks from St. Louis, instead of trying to wait it out and wade the waters.

But the team seems high on Paul DeJong.

Yes, there are reasons to believe the shortstop still has some pop. He hit 19 homers in 356 at-bats, while battling a tricky rib injury. And his strikeout rate dropped a bit, even amid the dismal year, marred with his .197 batting average.

But it hasn’t been just two subpar years — it’s been four.

Obviously, every move has ramifications and repercussions. If you trade DeJong, what could you actually get for a guy on a multi-year deal? And if you sign a shortstop, how much better will his production be than a DeJong-Edmundo Sosa platoon (and surely he will cost more)? And if you’re going for defense, a Cards’ calling card, DeJong-Sosa are good gloves. Yet is it possible, looking forward, that the best in-house scenario for the 2023 Cards would be Gorman at second and … Edman at short?

Oh, and there very well could be a designated hitter in the NL in 2022. That’s 600 at-bats for someone or some ones. A lot of names are tossed into this possible role. One not often enough is lefty-hitting Lars Nootbaar.

But it all comes back to the mindset surrounding 2022. It should be all-in. This is the year the Cards must return to the top of the division. The money to spend, the stars and rising stars, the pitching depth, it all aligns.

Hochman: SLU soccer, playing for trip to Final Four, last made it when the current coach played

Kevin Kalish is part of the 1997 Billikens who won a epic game in the Elite Eight.

"The other night, he made three game-winning plays," Wizards general manager Tommy Sheppard said, "and none of them involved him having to score.”

It was a special moment for everyone involved at the track, which continues to make an imprint and impact on the local sports community and, really, the community.

His work with military families and in the East St. Louis community earned Francois the 2021 honors.

Of course, Matz is now teammates with 'Waino,' the Cardinals’ 40-year-old who finished seventh in the 2021 Cy Young voting.

Hochman: The Cardinals’ 2022 rotation, with newcomer Matz, should (must!) walk fewer batters

The teams with the two-lowest walks-per-nine last year were very successful.

“You talk about 10-shirt who works!” said Bill McDermott, the former SLU player known around town as Mr. Soccer. "... He is nonstop.”

Hochman: With the grace and zest of Stan The Man, 15-year-old hoops prodigy Zaila Avant-garde wins a Musial Award

She has set three marks in the Guinness Book of World Records involving basketball. Oh, and she won the Scripps National Spelling Bee.

Nolan Gorman could wind up in a platoon at second base next season, or even be the starter if certain roster moves happen.