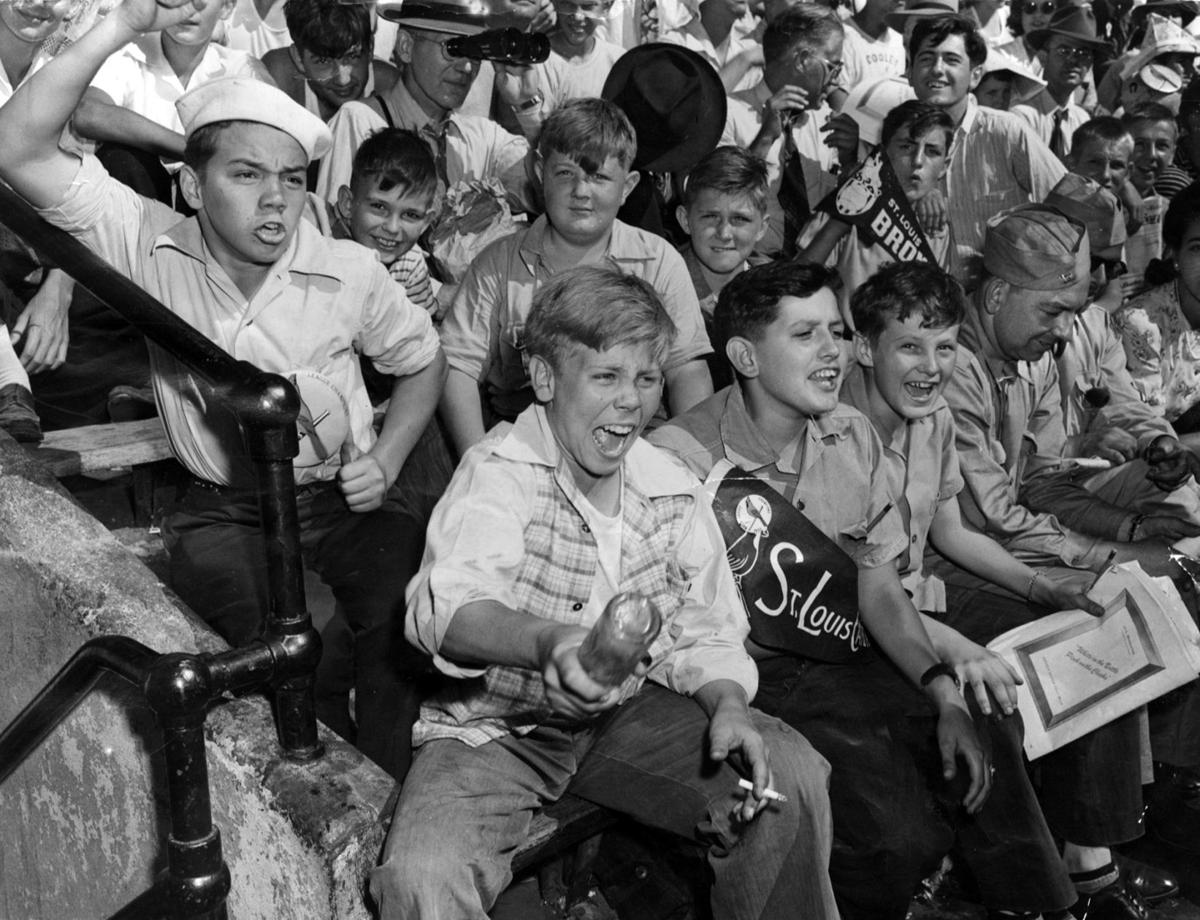 Young fans of the Cardinals and Browns, including one holding a cigarette, cheer during Game 4 of the 1944 World Series, on Oct. 7, 1944. It was a Saturday, so no hooky was necessary. The Cardinals won 5-1, evening the all-St. Louis matchup, then prevailed in six games. (Post-Dispatch file) 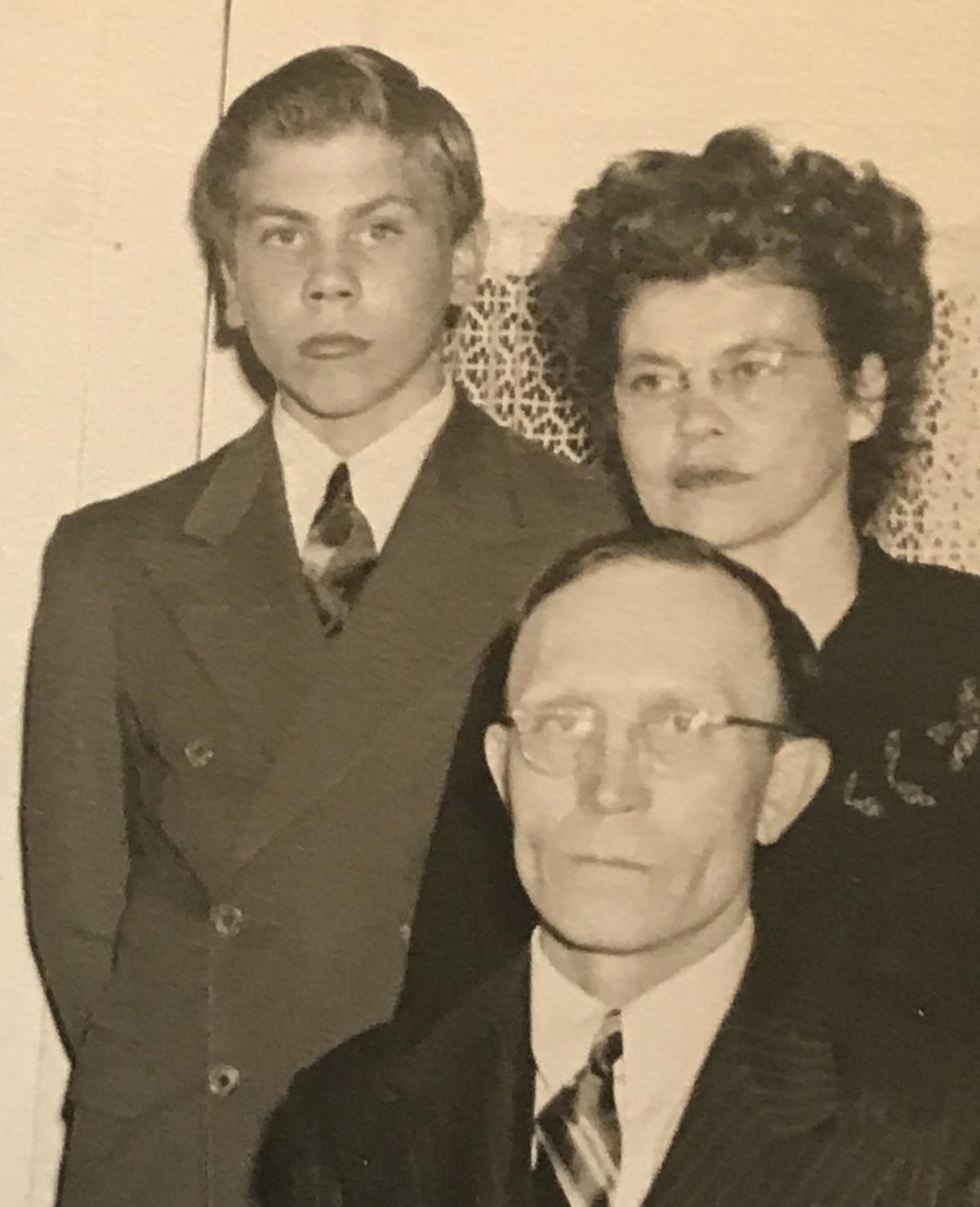 Here is a photo of Ralph Kelley, a longtime Cardinals fan who died in 1996. (Courtesy of Karen Ford)

Wait, is that boy smoking a cigarette?

It’s a question many St. Louisans have asked for many years, beginning 75 Octobers ago.

It originally ran in the evening edition of the Post-Dispatch on Oct. 7, 1944. Since then, it has occasionally popped up on these pages, complementing articles about the historic time the St. Louis Cardinals faced the St. Louis Browns in the World Series.

The photo captured the essence of the fans in the stands that Saturday at Sportsman’s Park: numerous kids smiling or cheering or jeering; a rowdy young boy in a sailor’s hat, while other older people wore actual wartime uniforms; pennants for the Cards and Browns; some women and men donning fancy hats of the day; and front and center, the most jubilant of all the lads, a screaming 12-year-old boy with a bottle in his right hand and a cigarette in his left.

“For years, I always loved that picture,” said author and documentary producer Ed Wheatley, who keeps the history of the Browns alive through his projects. “It jumped at me with the innocence, as well as the love — of the game and being at the ballpark.”

But just who is the boy with the cigarette?

For decades, the mischievous fellow has been unidentified.

But according to his step-daughter and grandson, the photographed fan is Ralph Kelley.

“He was a passionate, die-hard Cardinals fan who rooted for his team his whole life,” said 39-year-old Matt Ford, Kelley’s grandson. “The photo just kind of embodies rooting for the home team.”

Just watching Matt look at the special image is a special image. You can see the connection as Matt feels it. Baseball just does things to people in this town. Sitting at a downtown restaurant, and still down about the Nationals’ sweep of the Cardinals in the National League Championship Series, Matt recently spoke of his beloved ballclub and grandfather.

“The game was always on — I can remember watching the games with my dad and my brother and him,” Matt said of his grandfather, who died on Dec. 16, 1996. “It was kind of one of those conversation pieces we always had.

“A lot of times we’d be over at their house in Bridgeton — Grandpa Ralph and Grandma Marty, family get-togethers, Fourth of July or whatever. We would go out in the backyard, play catch together, me and Grandpa Ralph. I guess it’s just always been in our blood.”

Born on Feb. 3, 1932, Ralph was 12 on the day of Game 4 of the 1944 World Series. The Cardinals won that afternoon — thanks to a single, double and homer from Stan Musial — and won the “Streetcar Series” in six games.

Matt and his mother, Karen, have numerous photos of Ralph, from his teenage years until his last years. If you look closely, you can see one of Ralph’s eyes always is looking the same direction — Ralph had a glass eye, because of a BB gun incident, Karen said. Ralph also had a faint birthmark on his right cheek. He had a distinguishable look.

“My mom had been married several times before that, but she stayed with Ralph,” Karen Ford said. “He was a very intelligent man. I see why she stayed with him — he was just a very neat person and a very fun person. Some people just have that spark, and he was one. My mom was more quiet. Ralph was my step-dad, but all four of my kids knew him as ‘Grandpa.’”

As for the cigarette, well, “I think it was kind of surprising,” Matt said of first seeing it in the photo. “But when you talk to older people back in those days, it sounded like a lot more people smoked back then. But 12 is still really young. It’s kind of like — oh, OK, grandpa always smoked, so I guess he started smoking when he was 12. ...

“Ralph was just a super nice guy, he’d give you the shirt off his back. I think he was a people person for sure. He owned a car lot. He drove a cab for a while. He was a heck of a pool player. Just liked to have fun, a goodhearted guy.”

Matt is a bartender, but his favorite bar is the one in his basement. Down there, he has numerous banners and pennants from Cardinals and Blues history, as well as autographed memorabilia. Though his most cherished piece is the old photo of Ralph at the World Series. On the back is a copyright sticker from the Post-Dispatch.

Matt said he first heard of the photo in the early 1990s. After his grandma Marty passed away in 2004, Matt took the family’s copy of the photo. He loves showing it off to new friends who come by for a drink and a few innings.

“Really, our whole family, we’re all just huge St. Louis sports people,” Matt said. “And you kind of wonder if maybe this picture kind of put us all on that path? Maybe Ralph helped pass it on to the generations. ...

“I lost my dad a few years ago, too. And he was like my best friend in a lot of ways. Every day on my way to work, or coming home from work, he would call me and we would talk about what was going on with the Cardinals or the Blues.”

Matt has a son himself — Colin. He plays baseball and talks baseball with his dad. To think, Colin is 15 — three years older than grandpa Ralph was at the time of the photo.

The photo currently is part of a Post-Dispatch exhibit at the Missouri History Museum. The photographer is listed as unknown. As for the smoking fan, Matt and Karen have put a name to the famous face.

“You can just see the enthusiasm,” Karen said. “I can see why people think it’s a great picture. It was a moment. He had a moment there, and it was captured, and it was awesome.”

Hochman: Dylan Carlson has 'proven and shown what he can do,' but Cards want to see more from others first

The team didn't call him up to replace players on the injured list with COVID-19.

Hochman: With BLM now part of MLB culture, a conversation on Cardinals, race and St. Louis

Hochman: Man, the Blues sure have looked bad. But they still should be good to go

Now that round-robin play is behind them, Vancouver will provide a true test.

Hochman: With BLM now part of MLB culture, a conversation on Cardinals, race and St. Louis

Cardinals pitcher waits (and waits) to fulfill a dream and make a start in America. If he hadn’t left Korea, he would be pitching now.

Hochman: Tatis Jr. can do it all (but can he hit two grand slams in the same inning?)

So far this season, the Padres shortstop has a .776 slugging percentage.

Benjamin Hochman: The sports stories you might not have heard about

The Post-Dispatch sports columnist tells about shining the light on some lesser-known St. Louis sports figures.

The former Chaminade star is a marquee NBA player in the "bubble."

Cardinals pitcher waits (and waits) to fulfill a dream and make a start in America. If he hadn’t left Korea, he would be pitching now.

It's not just the Cardinals who tested positive who will be affected by the fallout.

Young fans of the Cardinals and Browns, including one holding a cigarette, cheer during Game 4 of the 1944 World Series, on Oct. 7, 1944. It was a Saturday, so no hooky was necessary. The Cardinals won 5-1, evening the all-St. Louis matchup, then prevailed in six games. (Post-Dispatch file)

Here is a photo of Ralph Kelley, a longtime Cardinals fan who died in 1996. (Courtesy of Karen Ford)