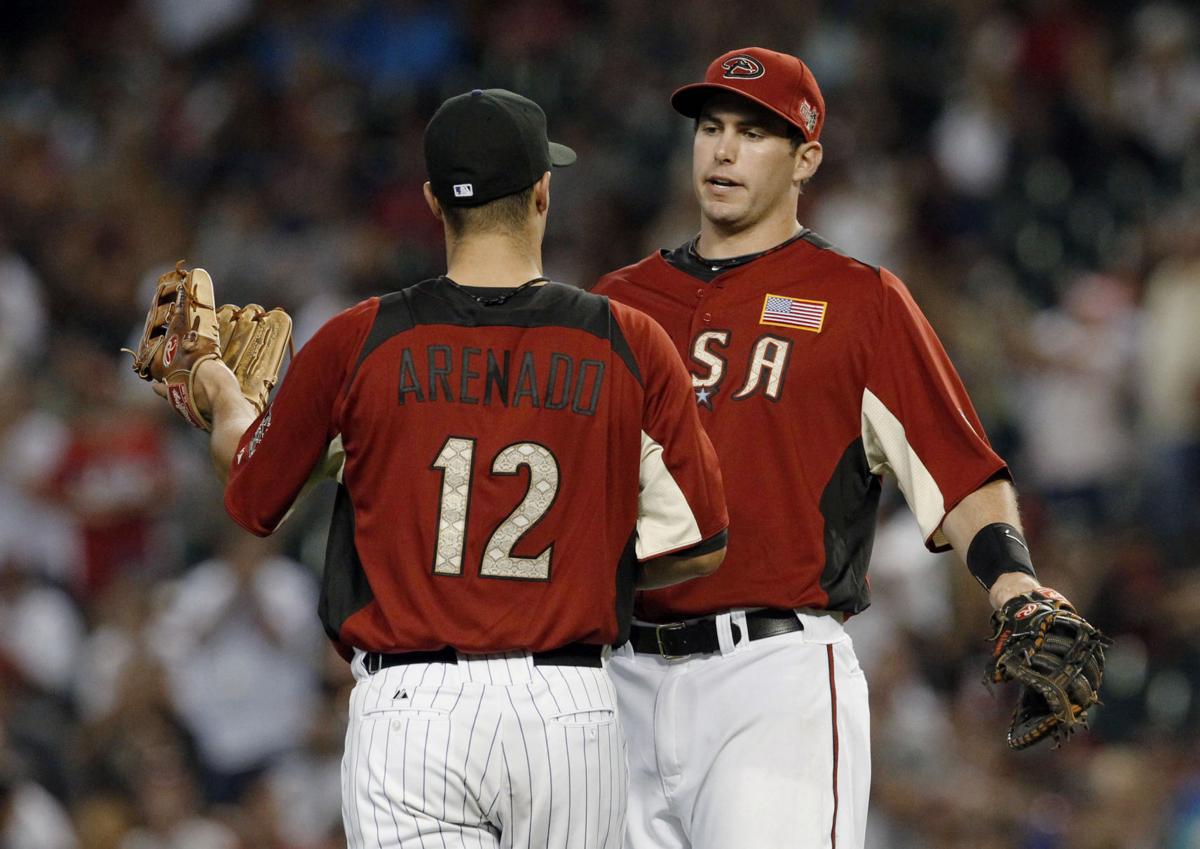 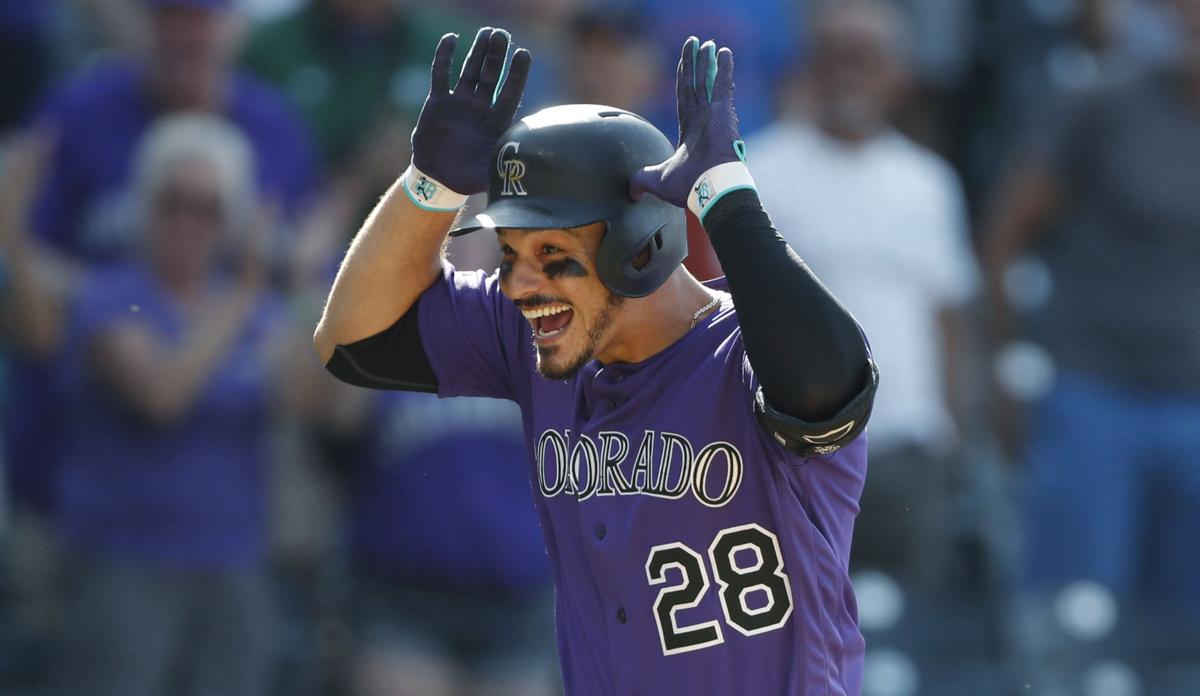 FILE In this Aug. 14, 2019, file photo, Colorado Rockies' Nolan Arenado celebrates as he circles the bases after hitting a walkoff, two-run home run off Arizona Diamondbacks relief pitcher Archie Bradley in the ninth inning of a baseball game in Denver. Arenado is at odds with the team's front office as the Rockies head to spring training for the season ahead. (AP Photo/David Zalubowski, File)

The old big leaguer is going to be a new daddy, so his room of baseball memories will now be a memory, too.

“We’re turning it into the baby’s room,” said Ben Paulsen, the director of player development for Clemson baseball, who played in parts of three seasons for the Colorado Rockies from 2014-16. “So we cleared all this stuff out. One of our assistants was helping and looking at the memorabilia on the wall. So I told him the story of the Rising Stars Game in 2011 for the Arizona Fall League: I was definitely the worst player in the starting lineup, because it was Nolan Arenado, Mike Trout, Bryce Harper and others.

“It’s one of those moments that you look back 10 years later and you’re like — that’s unbelievable that I was standing and taking a national anthem with those guys, and all of them are now All-Stars, you know?”

The annual Arizona Fall League features top prospects from every Major League Baseball team, but the 2011 collection is bit of baseball lore. In addition to Trout and Harper, there was Gerrit Cole and Dallas Keuchel, Wil Myers and Brandon Crawford, DJ LeMahieu and Oscar Taveras. But the guy who won league MVP was a 20-year-old Rockies prospect who has since said the 2011 Fall League was the first time he realized he could make the majors someday. And today, the superstar Arenado is a St. Louis Cardinal, embarking on another pivotal year in his pro career.

“There was just like an aura or buzz about him,” Paulsen said of the 2011 Fall League. “That’s when things started clicking for him. Nolan was always a great player, but then he was in super-good shape. I think that was the first year he started taking really good care of his body. And he just was the best player in a league with really good players.”

Or as Fall League teammate Casey Crosby recalled: “Every time he got up to bat I was like, ‘Here comes at least a double.’”

The fresh-faced 20-year-old Arenado wore No. 20 in Arizona. He played third base for the Salt River Rafters against the likes of the Peoria Javelinas, the Phoenix Desert Dogs and the Scottsdale Scorpions, whose most-famous alumnus was outfielder Michael Jordan.

“Our team was really fun, especially our bullpen,” said the pitcher Crosby, who cracked the majors with Detroit in 2012. “We were the Salt River Rafters, so anytime we’d score a run, we’d pretend we had oars and lean over the bullpen wall, rowing our oars, rafting down the river.”

Arenado hit .388, good for third in the Fall League, while driving in 33 runs, second only to a slugger named Mike Olt. Arenado’s onslaught of RBIs capped off his historic year — for Modesto in High-A, he drove in 122 runs, the most in any minor league in 2011.

“He had to be seeing a beach ball the whole time,” Paulsen said of his fellow Salt River Rafter. “He was hitting balls to left center and right center. Two-out RBIs. He was just a machine. … His ability that makes you awestruck is his ability to turn on a 96 mph fastball in on his hands and keep it fair down the left-field line. And he was able to do that at 20 years old. The Cardinals have to be freaking ecstatic to get that type of player.”

Crosby recalled asking some of the Rockies prospects about Arenado’s prospects. They told him the organization wanted Arenado to improve on his defense. It’s funny to hear that now — in the majors, Arenado has never not won a Gold Glove. But both Crosby and Paulsen remember Arenado’s work-ethic as an infielder. And one farm director of another club noticed some habits that were a harbinger.

“One thing I like about going to any game is getting there early and watching guys work,” said the Cardinals director of baseball administration John Vuch, who was the farm director in 2011. “You could see he was really serious about his work defensively. He was kind of learning the craft at that point.

“I saw him two games, and I remember that he didn’t have one ball hit to him. But this goes back to (legendary Cardinals instructor) George Kissell — he always told me to just watch the fielder as the pitch is coming in. How does he react? Especially if a hitter fouls a ball off. A good defender, when a hitter fouls it off, will be taking a step or two, whereas a guy who’s not an elite defender will be flat-footed or might lean a little bit, but he doesn’t really react to a foul ball. And Arenado was doing that on every pitch. And the second game was one-sided, they were losing by nine or 10 runs, but he was still focused. Every pitch. Didn’t take a pitch off. That made an impression on me.”

At the time, the Fall League was generally filled with players a season or two away from the majors. The average Fall League age in 2011 was 22.2. But Vuch and the Cardinals made an interesting decision at the time. Taveras was only 19. But he hit .386 in Low-A in 2011. Vuch remembered how Lee Thomas, the farm director in the 1980s, had outfield prospects Ray Lankford and Bernard Gilkey skip High-A and go straight to Class AA. Jupiter was the home site of the Cards’ High-A club, and the park wasn’t too conducive to hitting. So the Cardinals sent Taveras to the Arizona Fall League, hoping it would give him enough experience and confidence to catapult him to AA.

“We thought we were being kind of the exception to send a young guy like Oscar out there,” Vuch said, “and it turned out there were three other kind of prominent-type young players out there.”

As for the late Taveras, he just hit and hit. His batting average was .307 that fall. And he indeed dominated Double-A the next season, winning the Texas League MVP over, yep, Arenado. Taveras made his MLB debut in 2014. He died that fall in a car crash.

“He was a joy to watch — he was like a virtuoso as a hitter,” Vuch said. “The best memory if I have of that Fall League was a week before I got out there — I was talking to (instructor) Brent Strom about it, and he sent me some video. For some reason, Aroldis Chapman was out there pitching. He was only out there for a week or so — he had been in the big leagues that year, huge arm, 100-something mph. And Oscar was facing Chapman — intimidating especially on left-handed hitters. Oscar basically Charlie Brown’s it — line drive right up the middle, Aroldis goes sprawling to get out of the way. Aw man, Oscar is on first base with a big smile — and immediately gets picked off.”

In 2011, Vuch was a little late getting out to the Fall League, but for good reason — the Cardinals were in the World Series. On the night of October 27, 2011, Vuch was at Busch Stadium, while Arenado was with his father at a restaurant in Scottsdale.

“We were watching it and David Freese just went off,” Fernando Arenado recalled of Game 6. “That was special. Nolan and I talked about that. We talked about how special that is for that young man, who didn’t play for a while (in college), decided to get back into it and then to be able to do what he did in the World Series.”

And in the league’s title game, Arenado homered, and surely the Rafters in the bullpen began rowing.

In today’s video, columnist Ben Hochman breaks down a Yadi stat that should have Cardinals fans optimistic. And, as always, Hochman chooses a …

FILE In this Aug. 14, 2019, file photo, Colorado Rockies' Nolan Arenado celebrates as he circles the bases after hitting a walkoff, two-run home run off Arizona Diamondbacks relief pitcher Archie Bradley in the ninth inning of a baseball game in Denver. Arenado is at odds with the team's front office as the Rockies head to spring training for the season ahead. (AP Photo/David Zalubowski, File)