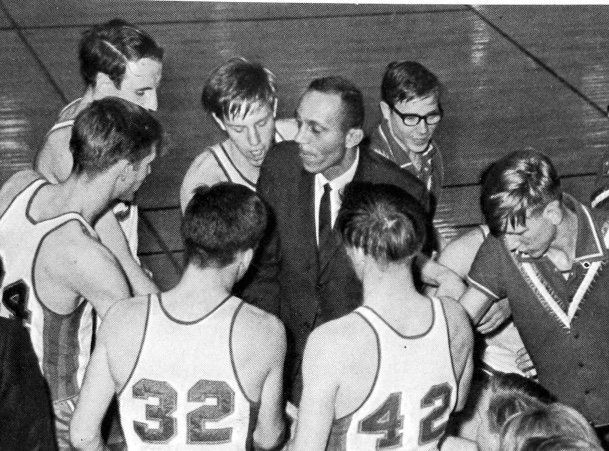 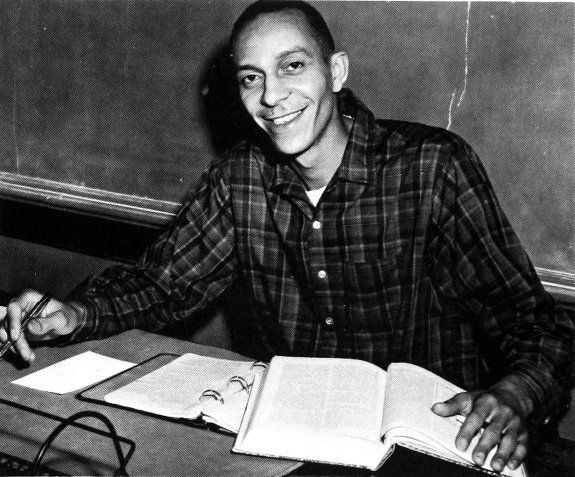 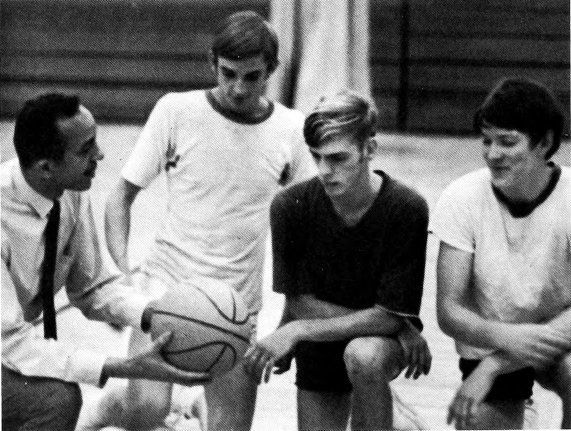 Coach Ed Crenshaw (left) meets with players from his team at St. Dominic during the 1969-70 school year. (Courtesy of St. Dominic High School) 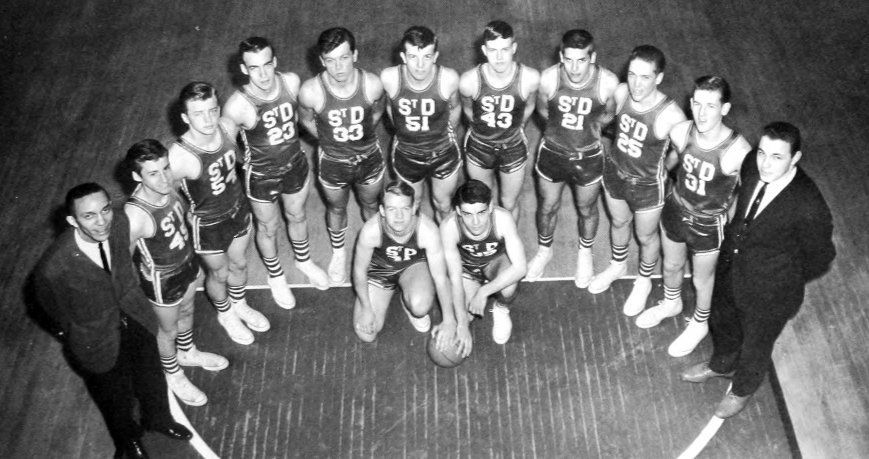 “And the type of people they are today,” said the man’s own son, “are mostly all a reflection of him.”

The man was Ed Crenshaw. Coach Crenshaw. He arrived in O’Fallon, Mo., then a small farming community with only hundreds of residents. It was the year 1960. And then, soon, the 60s. He became the basketball coach at Assumption, which would become St. Dominic High School. He taught the boys lessons about hoops, but mostly about life — they just didn’t know it at the time.

The 6-foot-6 Crenshaw was a high school basketball star at Sumner, then a college basketball star at Quincy. After serving his country, he wanted to coach and teach. His old teammate, Norm Oschner, snagged a job at this new high school, Fort Zumwalt. So, Crenshaw went and asked Oschner if he could replace his pal at Assumption. It was quite an assumption.

“Sure enough, the priest was home,” said Oschner, who recently turned 85. “I said, ‘You’re still looking for a coach?’ And he said, ‘Yeah I can’t seem to find anybody.’ And I said, ‘I’ve got somebody right here, if you want a good coach, he’s your man.’ I could tell he was a little uneasy about it because Crenshaw was African American. The priest said, ‘Can you step out in the hall?’ And then he asked, ‘He’s black, isn’t he?’ I said, ‘Does that make a difference? He’s the man for your job.’”

Bernie Boehmer appreciated the balancing act that coach taught the boys — be humble in victory but also personally proud of your accomplishments; accept defeat with dignity and face the lessons of the loss. He was amazed how coach never got rattled. Coach taught the boys self-confidence and self-control. And he also wanted them to see where he was from.

“Out there in O’Fallon, we were pretty secluded,” Boehmer said. “And he introduced us to the inner-city life. We played a couple all-black schools. I think he just wanted us to see a different side of life that we were not used to. In the four years I was in school, we didn’t have a black student. So it was a heck of a learning experience for us.”

Dave Beckering never once recalled coach Crenshaw disrespecting a player on their team … or the other team … or the other team’s coach … or, even, a referee. Sure enough, Crenshaw became a ref himself, officiating college games in later years. Beckering was playing for Three Rivers College and his old high school coach was one of the officials. College players weren’t allowed to dunk, even pregame. But Beckering was feeling good and knew the ref, so “I threw down three or four, and then I go out for the tip. Crenshaw walks up with the ball, puts it out like he’s going to throw it up, brings it back, blows his whistle, points at me and says: ‘Technical foul on No. 24 for dunking in warm-ups.’ Needless to say, my coach was not very happy.”

Crenshaw remained close with Oschner, the old college teammate who helped get him the Assumption job in the first place. Oschner often had Crenshaw over for dinner. They’d swap stories about the old times of the '50s and discuss modern times of the '60s.

“One night, after a basketball game, the Assumption players went to the local bowling alley,” Oschner said. “At that time in O’Fallon, the population was 700. Now it’s about 90,000. The bowling alley was about the only place to get a sandwich in the town. Finally the guy behind the counter asked one of the players: ‘Who is this fellow with you?’ He said, ‘Well, that’s our coach.’ So he said, ‘Well, we can’t serve him. Right around the corner he can go in this other little room and give him a sandwich there.’

“So one of the kids said, ‘Let’s get out of here.’ And the whole team that was there for a Friday night meal left.”

Fifty years after Crenshaw was hired, his old players pooled together money to buy the naming rights of the school’s basketball floor. And on Dec. 1, 2010, they unveiled Coach Ed Crenshaw Court at St. Dominic. A large version of coach’s signature is inscribed across the court. That evening, dozens of Crenshaw’s former players were there.

“It was just — you cried,” Boehmer said. “It was so heartwarming to see him rewarded for everything he gave to that school. He was our mentor, he was our teacher, he was our coach. He was probably the most-loved and revered member of that school. … I was there when they inducted him into the Missouri Sports Hall of Fame (in 2011). He was in a wheelchair and couldn’t walk, but he still knew who you were and had that quiet sense of humility about him. It was just a tearjerker.”

In 1973, Crenshaw became the coach at University City High School. There, they ultimately named the gym after him. When he retired in 1996, his combined record from the two schools was 677-266.

“Coach Crenshaw was a pioneer, a gentleman and an icon in St. Dominic history.”

Recently, Ed Crenshaw Jr. was picking up food at Pantera’s Pizza, “and when I gave the kid my credit card, he looked at my name and recognized it. He said, ‘My grandparents talk about your father all the time!’

“My dad was able to reach out and touch so many lives. … He came from pretty much nothing to leaving this earth with everything, as I classify it.”

Sixty years after Crenshaw arrived in O’Fallon in 1960, the coach’s legacy lives on — in both the city of St. Louis and St. Louis County.

Start your digital subscription for our lowest intro price - only $29.99 for a full year.

The former Chaminade star is a marquee NBA player in the "bubble."

Coach Ed Crenshaw (left) meets with players from his team at St. Dominic during the 1969-70 school year. (Courtesy of St. Dominic High School)