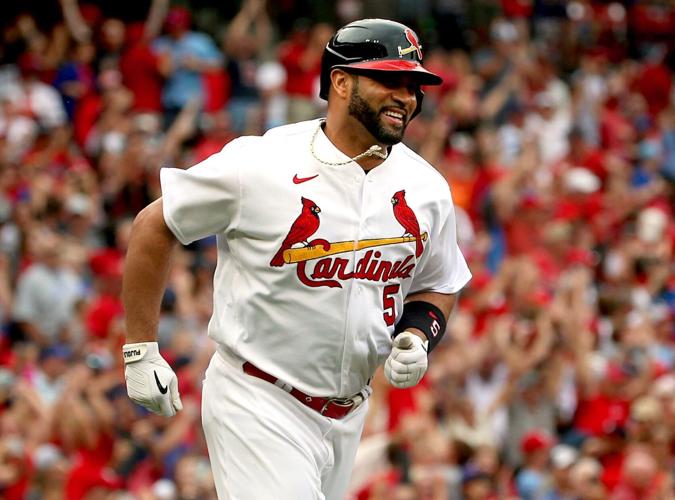 The Cardinals' Albert Pujols rounds the bases after hitting a two-run homer off the Cubs' Brandon Hughes in the eighth inning of a game on Sept. 4, 2022, at Busch Stadium. It was the 695th homer of his career. 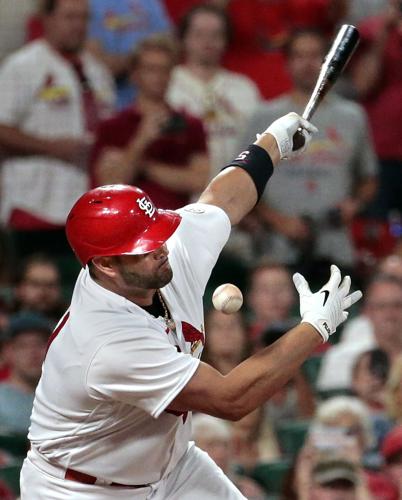 The Cardinals' Albert Pujols fouls a pitch against the Reds on Sept. 15, 2022 at Busch Stadium.

Babe Ruth was real, insomuch that he existed categorically as a human. But everything about him, everything he accomplished, everything he’s gone on to represent, makes him mythical.

After all, he hit 700-plus career home runs.

That, of course, brings us to Albert Pujols, our town’s guy, who once was the greatest player in the game, and now, at 42, could join an exclusive club with perhaps the game’s greatest player ever.

The Cardinals’ Pujols is on a mythical quest in real time — one St. Louis gets to witness and experience.

The anticipation has gripped Cardinal Nation. With each stunning slug, Pujols’ legend grows. He has 698 career homers — and by the time he takes his next at-bat at Busch Stadium, he could have 700.

He’s, if anything, the Dominican Babe Ruth.

The 700 club features three members (for perspective, there have been 22,800-plus men to make it to the majors). George Herman Ruth hit 714 home runs. Henry Louis Aaron hit 755. And Barry Lamar Bonds, who marred the record books, hit 762, though 317 of those were hit at 35 or older, an absurd and conspicuous accomplishment that pairs with the preponderance of evidence that he cheated his butt off.

As for Jose Alberto Pujols, he has 14 games to hit two homers (though, if he is to finish with 698 or 699, it’s still incredible that he hit so many homers, the guy he’s behind on the career list is Babe Freakin’ Ruth). The Cards have eight upcoming road games, the first on Tuesday in San Diego. After that three-game series, St. Louis starts Friday, in, of all cities, Los Angeles.

Pujols, perhaps one recalls, left St. Louis for the Angels and the “City of Angels” after 2011. And then, in 2021, he played for the Los Angeles Dodgers, the Cards’ opponent Friday-Sunday.

Not that he wouldn’t get an emotional ovation anywhere else, but it would be fitting to get No. 700 in LA, a town that followed him for a decade and can appreciate the aplomb of a Pujols bomb. Dodger Stadium, star-studded on the field and off, turns ballgames into Hollywood-like events so the stage would match the moment.

Can he get two more? Sure.

Even though Pujols is in a bit of a slump — one for 14, the lone hit being a homer — he’ll face a lefty, Blake Snell, on Wednesday (since Aug. 10, Pujols has a barrel rate against lefties of 20.5%, best in baseball, per MLB.com). And after six games in California, the Cards play two in Milwaukee — that’s where Pujols has a career OPS of 1.036. Then they finish with six against the Pirates (three at home, three on the road). The Pirates are not very good at baseball.

Naturally, St. Louisans want it to happen in St. Louis. Recent home games have become festivals featuring revelry for this home run revival. On Sunday, when the first 25,000 fans received a Pujols bobblehead, thousands of fans lined up hours before first pitch. One line snaked past Paddy O’s.

Inside the ballpark, some fans wore old Pujols jerseys from his prime, while others wore new T-shirts sold at the stadium shop for $49. And as Pujols came to bat, there was a rousing roar as fans rose.

In Sections 171 and 172 — in left field behind the outfield wall and beside the bullpen — arms sprouted up with phones, while some positioned their hands in ball gloves, you know, just in case. Behind those sections, some fans craned their necks and bodies around poles and vertical pipes to catch a glimpse. The crowd was hushed, punctured with an occasional “Come on, Albert!” Fittingly on a Sunday, it felt as if the field was a fairway.

As he made contact, a few were duped — or had told themselves that surely any contact would mean a home run. Alas, he popped out and grounded out, as he had most of the weekend.

And so, the show now goes on the road.

I believe he’ll get to 700. Assuming that he’ll surely hit one in six games against Pittsburgh pitching, this means he’d need one in the eight upcoming road games.

And another fun part about this is the relevancy of Pujols’ home runs. In recent months, his swats have been game-swaying blasts. Many have come in clutch situations. A couple came in games in which no one else is hitting, and he carried the team on his back like a star basketball player would. So, a homer (or two) before the division is clinched would only enhance the drama and enrich the lore.

Thus, St. Louisans will be groggy this week. Sleep schedule will be simply suggestions, as fans bypass bedtimes to watch late games from California. It’s not ideal. But it only adds to the ride — another shared experience as Cardinals fans take in the next incredible steps toward this mythical, Ruthian milestone of 700 homers.

“We’re witnessing a really cool part of history,” said Cardinals manager Oliver Marmol, who has the best seat in the house. “And we’ll look back at this and be able to tell some pretty cool stories.”

Juan Yepez returns to the majors, joins team in San Diego, and will be a right-handed option as manager Oliver Marmol plots outfield trios by matchup.

The Cardinals' Albert Pujols rounds the bases after hitting a two-run homer off the Cubs' Brandon Hughes in the eighth inning of a game on Sept. 4, 2022, at Busch Stadium. It was the 695th homer of his career.

The Cardinals' Albert Pujols fouls a pitch against the Reds on Sept. 15, 2022 at Busch Stadium.