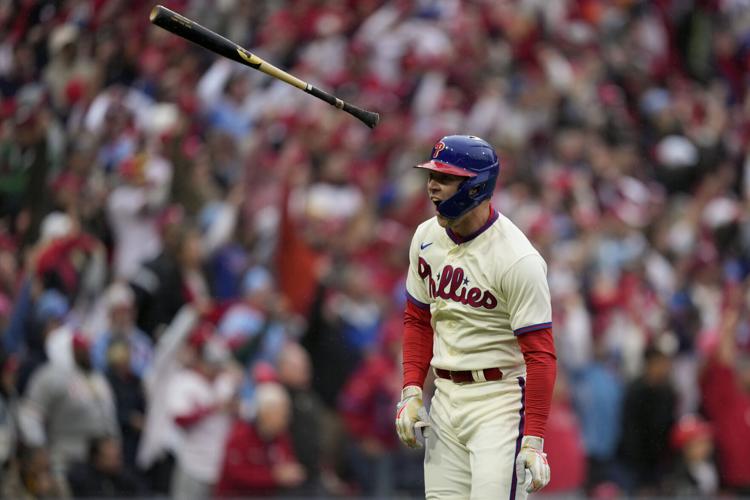 The Phillies' Rhys Hoskins celebrates his two-run home run during the third inning in Game 5 of the National League Championship Series on Sunday, Oct. 23, 2022, in Philadelphia. 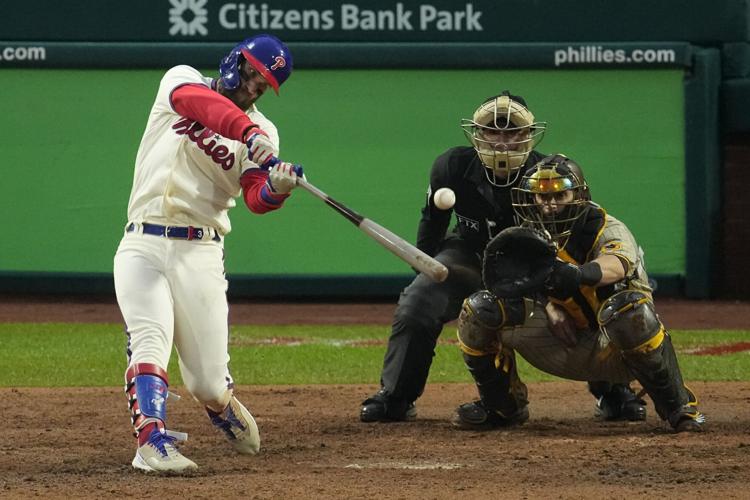 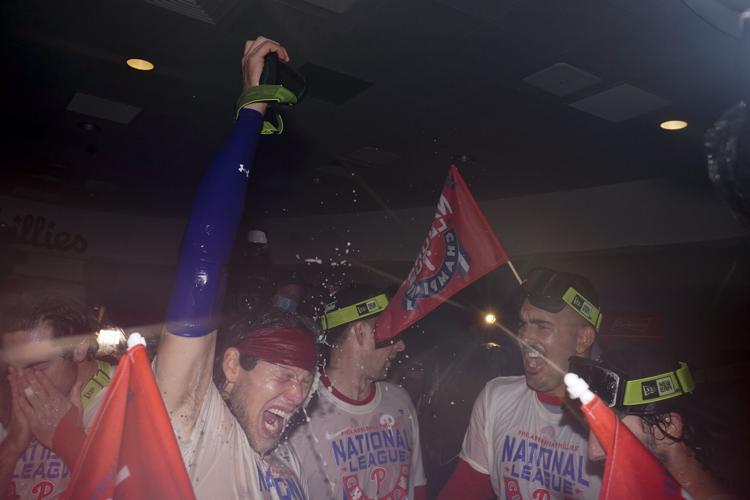 Both the swing and the sound were violent.

Both the swing and the sound were beautiful.

Bryce Harper’s Sunday thwack created an iconic crack. And this was a homer St. Louis actually experienced before.

No, no, that’s not a reference to Harper’s homer in Game 2 of the Wild Card round — a belt-high curveball he hit Arch-high. It was in the 1985 National League Championship Series, when the Cardinals’ Jack Clark launched history in the top of Game 6’s ninth inning.

Until Sunday, per ESPN’s Sarah Langs, Clark’s homer was just one of five ever hit in this scenario: A go-ahead homer while trailing in the eighth or later of a potential postseason clincher.

And Philadelphia’s Harper did so stunningly Sunday — his two-run, opposite-field bomb gave the home team a 4-3 lead in the bottom of the eighth. That would prove to be the final score.

Philadelphia is in the World Series. This should elicit emotions in St. Louis, ranging from consternation to frustration to exasperation.

This was the team that beat the Cardinals.

This was the team the Cardinals had the opportunity to be.

This is the team that should remind Cardinals fans of the glory of a recent title — but also how maddening the small sample size and tournament can be.

As for that Wild Card series, remember how close the Phillies were to facing an elimination game? As Ryan Helsley walked to the mound in the ninth of Game 1, St. Louis had a two-run lead.

Sure, we can say that manager Oliver Marmol should’ve pulled Helsley before the Alec Bohm at-bat (or earlier). Still, the Cards soon induced two double-play grounders and didn’t record one double play. The Phillies scored six in the ninth and went on to win Game 1. And Game 2. And the National League Division Series against the defending champs from Atlanta. And the NLCS against the Padres.

Also discouraging? That the Cardinals had the chance to be the Phillies.

The Cardinals could’ve made an offer for the one-time prodigy Harper, now he of the prodigious homer. Same for Phillies pitcher Zack Wheeler. And while Harper might’ve been too high a price, a tier below would’ve been the slugger Kyle Schwarber this past offseason. As you might recall from this keyboard, it made sense for the Cardinals to splurge on Schwarber and essentially lock in 25-30 homers.

He signed for some big bucks — four years, $80 million — and isn’t much of a glove guy. But the Cards opted for a different lefty hitter in Corey Dickerson, who proved just average. Yes, signing Schwarber might’ve changed the storyline of Albert Pujols’ storybook season. But signing Schwarber might’ve meant the Cardinals still would be playing now.

So, the Cards won their division and the Phillies didn’t. The Cards had 93 wins, the Phillies had 87. But the Phillies were ahead of the Cards in the payroll ranking. Money talks. Philadelphia was fourth in baseball at $255 million (per Spotrac), while the Cards were 12th at $170 million. Payroll doesn’t guarantee playoffs. But consider that this year, the final four remaining postseason teams were ranked third, fourth, fifth and ninth (and Nos. 1, 2 8 and 11 all made the playoffs).

The Cardinals must spend more — they must take risks to bolster their roster. The team hasn’t even won a game in the NLCS since 2014. And that year, they won one. You see how hungry the Phillies’ fans were for a winner. Cards fans might not express it as much, since they still show up to games by the millions, but the Cards fans are starving. And deserving.

As for these Phillies, their win total is reminiscent of the 2006 World Series champion Cardinals. That club, of course, won just 83 games. But the team was talented. And got healthy just in time for October. Neither team was particularly great down the stretch. But they got into the tournament, found a groove and won a bunch of ballgames.

So, yeah, anything can happen in October — that’s both the magic and the madness that is baseball’s small-sample-size tournament. But dominating other months often leads to success in the final month. In seven of the last 10 World Series, the eventual champion had one of the four-best records in baseball. And entering this year, the team with baseball’s best record made the World Series in six of the past nine postseasons.

That includes the 2013 Cardinals, the last St. Louis team in the Fall Classic.

They’ll celebrate their 10-year anniversary next summer at Busch Stadium.

Still, there are a number of young, likable players on the team and they have bashed their way through the AL side of the postseason.

An NBA superstar promoted lies about the Holocaust. Do you realize how disturbing that sentence is? How frightening it is?

The Phillies' Rhys Hoskins celebrates his two-run home run during the third inning in Game 5 of the National League Championship Series on Sunday, Oct. 23, 2022, in Philadelphia.