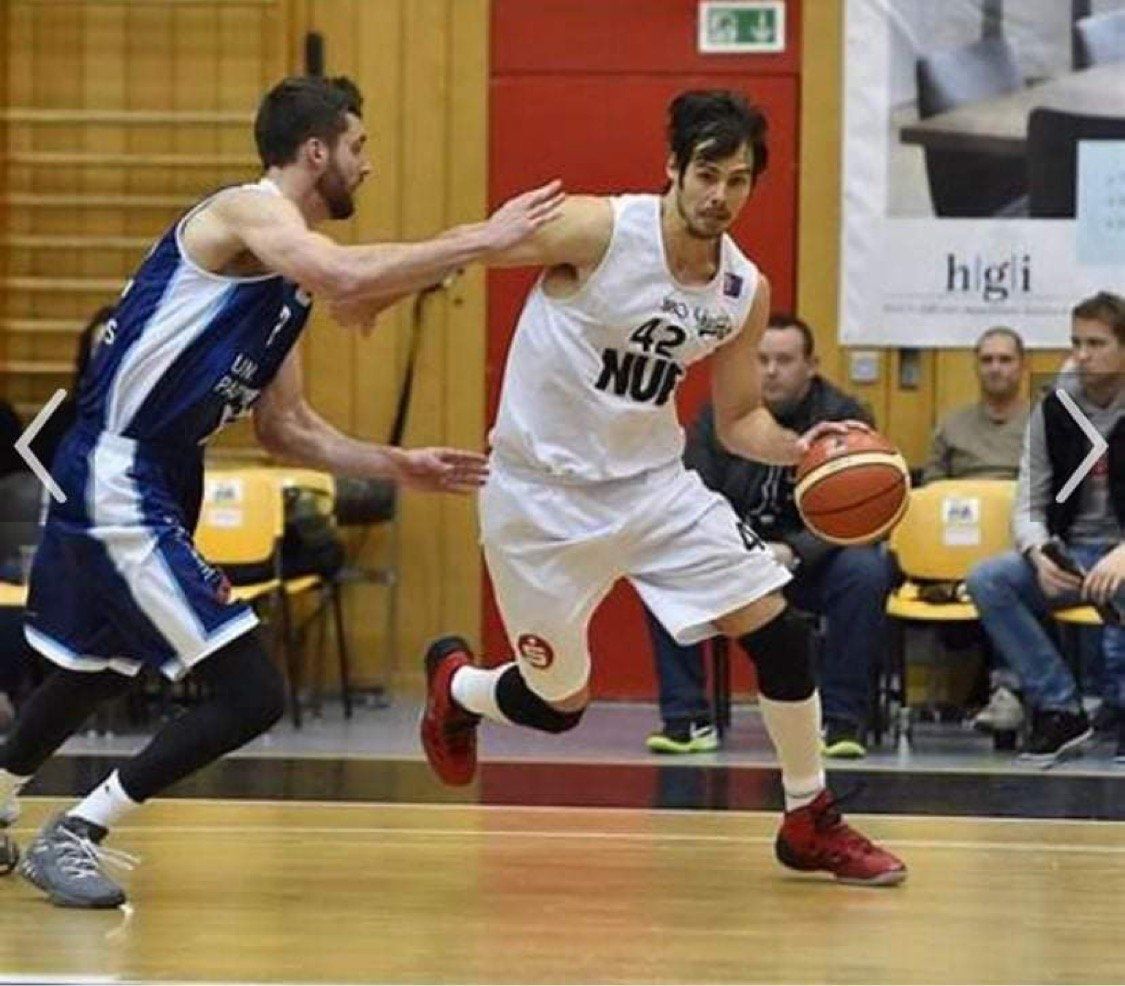 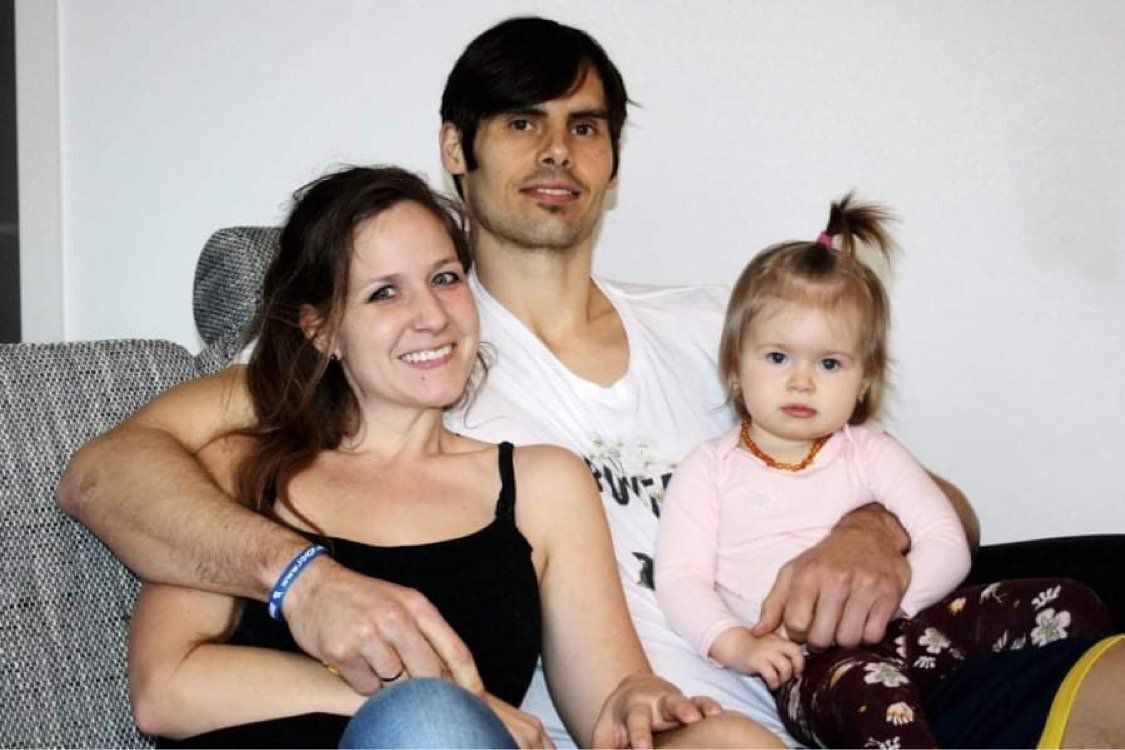 Dan Oppland has played for pro basketball teams in the Netherlands, Poland and Sweden. Germany, Austria and Finland.

Dan Oppland and his wife Katja, are raising their daughter, Fiona, in Berlin.

This is a love story.

It began innocently in the driveway of a St. Louis Hills home. (Actually, I’m not sure how innocent it was, considering the court rules were “no blood, no foul.”) But it began innocently enough, and it’s blossomed for years and now decades, a full-fledged love affair that Dan Oppland can’t quit.

He now is 37 and still playing professional basketball overseas. The St. Louis kid is entering his 16th season. Sixteen years, chasing a dream. Living a dream, too. But it is an occupation. And, some might say, an obsession. He’s played for teams in the Netherlands, Poland and Sweden. Germany, Austria and Finland. And now, Germany again.

“He’s still in love with it, there’s no doubt about that,” said his father, Steve Oppland.

The Internet attributes this quote to numerous people, from Mark Twain to the crooner Marc Anthony, but the sentiment is the same: Find something you love, and you’ll never work a day in your life. And while that is a nice line, tell that to Dan Oppland when he’s sweating through his second practice of a day or riding a bus late at night in a faraway land or when his knees curse at him in two languages.

He’s made his fair share of Euros over the years. And he’s married a German woman and they’re raising their daughter in Berlin. It’s a good life. A basketball life. And he’s a basketball lifer.

“I’m blessed, man,” said Oppland, who graduated from Whitfield in 2002 and played college ball at Valparaiso. “It’s a great life where you wake up and play basketball, but it’s a grind. You practice, you’ve got to rest, you practice again, twice a day. Sometimes three workouts a day. It is definitely a grind, but I love the grind. If you’re committed to it, it can be rewarding. . . . I mean, I’m a competitor. Very competitive. So if I can still do it, I don’t see why not. If you’re going to still pay me some money, of course, I’ll keep doing it. I’m in good shape and I like mentoring, I like talking to kids on the team — I try to help them out because I used to be in that position as well.”

Dan has a twin brother, Mike, who played internationally, too. Their journey began in the driveway and then in local gyms, playing for a team coached by Dan Ahearn, the father of former NBA player Blake Ahearn. Coach Ahearn taught the sport and the discipline it demanded. The Oppland boys fed off it. They fell hard for basketball, even though it was a sport in which you’d often fall hard.

“Dan was always one of the toughest guys on the floor — he never backed down and showed up to play every game,” said Blake Ahearn, a DeSmet hoops legend who’s now an NBA assistant coach for the Memphis Grizzlies. “Dan made me look good growing up playing together. He had a great skill set and feel for the game — anyone that has that has a chance to play for a long time.”

Dan sprouted to 6 feet 7, giving him the frame to complement the passion. After a tremendous career at Valpo (19.8 points per game as a senior), he headed to the Netherlands to play pro ball. His first team was Hanzevast Capitals Groningen. It would not be his last. Six countries. Numerous levels of basketball. He’s played in front of 5,000-6,000 fans and 500-600 fans. One season, he played for teams in three countries.

There were roadbumps in his career, from some loneliness to shady agents, but the ride has been appreciated.

“He made friends easily, he kind of follows the Golden Rule,” his father said. “He just knows right from wrong, so he stayed out of trouble and honed his craft. He’s really put himself in a good situation. There are a lot of kids who go over there and can’t do it. A lot of kids who are better basketball players who went over there, and they just can’t do it. You’re by yourself in an apartment. They’re just not mature enough. I’m happy for him and proud of him. He’s made a life over there, but we miss him. And Western Europe is pretty nice.”

He played numerous seasons in Germany’s top league, in cities such as Nuremberg and Heidelberg, but now he’s transitioned to the “B” league, playing for SSV Lokomotive Bernau.

Last season, the forward Oppland averaged 13.9 points per game and 7.6 rebounds. With this league, there are only four practices and one game per week, so he’s able to work as a school teacher and a coach for a youth team. You’re not going to believe this, but Dan Oppland loves coaching basketball. It could be his next gig when he retires.

If he retires. Will he ever retire?

“I go year by year, man — I thought I was done two years ago,” he said. “Preseason starts August 10. The season goes until April.”

Oppland is visiting the states this month, traveling with his family and parents — Steve and Barb Oppland.

“I’ve noticed something on this trip,” Steve said by phone Sunday. “Dan was kind of behind me and I looked back and he was pretending like he was dribbling a basketball and shooting at the basket. It’s almost like I was looking back 20 years ago. When you see somebody want to dribble and shoot even when he doesn’t have a ball? That’s pretty much the love of the game. I don’t even think he noticed me looking at him. And I tell you what — if you told him this, he might not remember he did it.”

Dan Oppland has played for pro basketball teams in the Netherlands, Poland and Sweden. Germany, Austria and Finland.

Dan Oppland and his wife Katja, are raising their daughter, Fiona, in Berlin.