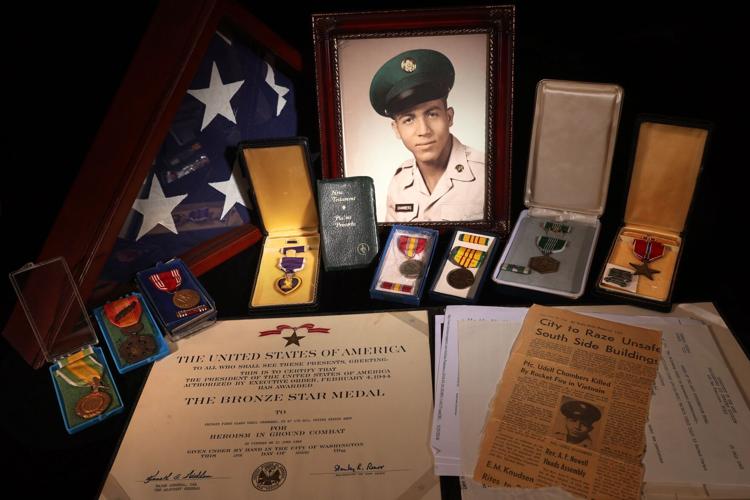 Medals, memorabilia and portrait surrounding the military service of Udell Chambers are photographed on Wednesday, Aug. 4, 2021, at the Meacham Park home of his sister, Josie Chambers. Udell was a Kirkwood High School graduate who was a senior when he was recruited to play for the Atlanta Braves. While playing in the team's farm system, he was drafted by the Army in 1967 and sent to Vietnam, where he was killed by rocket fire. 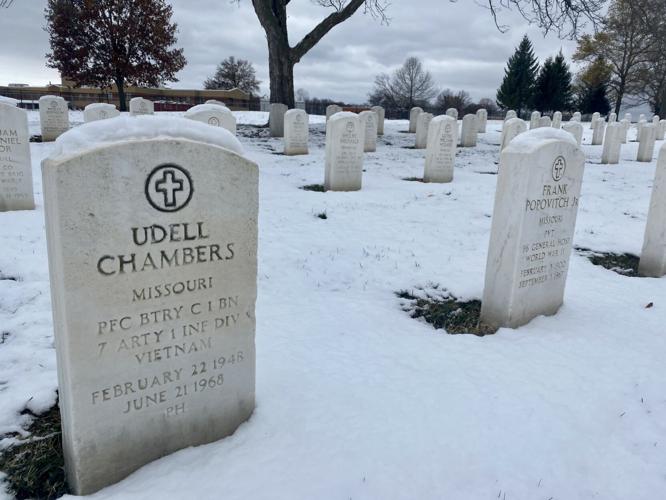 The gravestone of Udell Chambers, a St. Louis native and minor-league baseball player who died in Vietnam, is seen Saturday, Nov 12, 2022 in a light snow. He is buried at Jefferson Barracks National Cemetery.

His name was destined to be on a baseball card, but it ended up on a tombstone first.

On Saturday, a soft layer of snow coated the departed at Jefferson Barracks National Cemetery. Gloom loomed from the gray sky. In the 31-degree cold, the whipping wind was incessant. And inscribed on one of the off-white graves, which looked like all the others in this row, and every row, row after row, thousands and thousands of Americans who made the ultimate sacrifice, was his name:

It’s a name we should’ve known.

It’s a name we still should know.

A St. Louis kid, Chambers graduated from Kirkwood High School and, soon after, signed to play in the Atlanta Braves organization. In 1967, Chambers hit .325 for the Class A affiliate. In those 100 games, he hit 12 homers and stole 28 bases. His OPS was .952.

But that fall, he was drafted.

The next summer, he was dead.

‘Why won’t somebody stand up for him?’

Every town seems to have that one kid. The young athlete who just played sports in a way your body couldn’t. Or anybody’s body. He just seemed indomitable. Invincible.

“People from Meacham Park would come over to Kirkwood Park to watch him play ball,” said Charles Chambers, Udell’s brother. “Kids would get on their bicycles. All you’d have to say was ‘Udell Chambers.’”

He used to hit homers in corkball over J. Milton Turner School. In baseball games, he would unleash these heaves from the outfield and some would wonder — that little guy threw that? Chambers was only 5-feet-8, 150 pounds. But he could play. And — he was just so humble.

His parents, Tommie and Bettie Chambers, came north from Mississippi and raised seven children in Meacham Park. Some of the streets hadn’t been paved. There were outhouses. Bettie worked as a maid at a motel. Tommie worked at a steel company until he was injured. Then he’d make money by cutting hair from his home.

“With the small amount of money, we never saw a hungry day,” said Udell’s sister, Josephine. “We never really knew we were poor.”

For the 1967 minor-league season, Chambers signed for $500 per month. The family still has the contract and the envelope with the Atlanta Braves logo. Udell told Josephine his goal was to buy his parents a house someday.

“When he was drafted into the Army, that hurt me so bad. I couldn’t figure out — what is this war all about anyway?” said Mardell, who died in 2022 at the age of 80. “Why are they taking my brother? Why won’t somebody stand up for him? But it was not to be. When he lost his life there, half of me was gone. It was a situation I had to learn to overcome. But he will always be in my heart.”

No player from Major League Baseball died in Vietnam. In fact, only one person who had played in the majors even served in Vietnam — that was Roy Gleason from the 1963 Dodgers, per the site Baseball’s Greatest Sacrifice.

Some minor leaguers did serve. Nine were killed.

To this day, some of Chambers family members wonder how the Army draft process all went down. Was it just simply the way it was? Though, there had been rumors that professional leagues took measures to protect players from serving overseas. Did being Black affect Udell’s trajectory?

“Looking back, it makes me wonder — things were different then,” said his niece, Cyndi Wise. “Did he have the support? ... It makes you think. And it makes you frustrated.”

In February of 1968, he was assigned to the 1st Infantry Division, 1st Battalion, 7th Field Artillery Regiment.

Chambers arrived in Vietnam during the Tet Offensive.

On June 21, 1968, the Atlanta Braves played in Chambers’ hometown against the St. Louis Cardinals.

Chambers was posted in a night defensive position near Da Nang. Hostile rocket fire hit his base. Army Pfc. Udell Chambers was killed in action.

“I’ll never forget, we had walked to the dry cleaners,” his sister Josephine said, her eyes welling. “We were coming up Chicago Street and the sun was so bright. So I said to my friend, ‘What are those two guys going to our house for?’ And immediately, a strange feeling came over me.

“We got closer to the house, and the sun was going down. All of a sudden, I heard: ‘AHHHHH!’ Screaming and hollering. My mom was screaming, my dad was screaming and the man had to make the announcement that Udell was killed in action. We ran up the street.

“An ambulance came. It had to take my mother and my father to the emergency room. And the sun was down.”

The funeral was open casket.

At the First Baptist Church of Meacham Park, they couldn’t fit everyone for the service.

Udell’s belongings were sent to his parents’ house. As were the medals earned, including the Purple Heart.

That day at the St. Louis Bread Co., more than half a century after he died, the family placed the items on a table for a reporter to see.

There was a worn-down, pocket-sized Bible.

“I wonder,” Cyndi said, “if it was with him when it happened?”

To this day, Charles Chambers can still remember his friends picking him up that day.

They told him the news that Udell was dead.

And the next year, Charles himself was drafted.

“Apprehensive,” Charles said. “I was apprehensive, seeing what my brother went through. And as a 19-year-old person, leaving home. And I’m going somewhere, and I don’t know if I’m coming back.”

Overseas serving our country, Charles was on guard duty one night when he heard words that make him shudder to this day:

“I said to myself, I’m going to die,” he recalled. “I had only two rounds of ammo, not knowing if I’m going to live or die.”

Charles made it out safely.

“I have nightmares sometimes,” he said. “A lot of time, you don’t want to think about it. But it’s there.”

In the years after Udell died, a story was passed around town. Josephine couldn’t recall who initially said it. But apparently, there was this letter. It had been sent to Udell in Vietnam. Someone had worked out a deal, possibly someone with the Braves, to get Udell back to America. Except the letter arrived the day after he died.

This newspaper filed a request through the National Archives. The search of Udell’s military records for a letter regarding his release was negative.

And each time Sadie Wise stepped into the batter’s box, “I would draw the letter ‘U’ in the dirt,” she said. “It was a way to have his spirit with me when I was at bat.”

Sadie went on to play for St. Louis University, finishing her career this past season. She is one of the best to ever play for the Billikens. In 2020, she set the school record for batting average (.438). And in 2022, she made third-team All-Region.

“My mom would love to watch Sadie play, as she did with watching Udell,” Mike Wise said. “She would say that Sadie reminded her of Udell because they could both dominate during the game but were very humble and unassuming as soon as the game was over.”

The Billikens get the Tigers Thursday after the women's teams played Saturday.

Have the “infield of dreams” with MVP Paul Goldschmidt at first, Tommy Edman at second, Trea Turner at shortstop and Nolan Arenado at third.

Medals, memorabilia and portrait surrounding the military service of Udell Chambers are photographed on Wednesday, Aug. 4, 2021, at the Meacham Park home of his sister, Josie Chambers. Udell was a Kirkwood High School graduate who was a senior when he was recruited to play for the Atlanta Braves. While playing in the team's farm system, he was drafted by the Army in 1967 and sent to Vietnam, where he was killed by rocket fire.

The gravestone of Udell Chambers, a St. Louis native and minor-league baseball player who died in Vietnam, is seen Saturday, Nov 12, 2022 in a light snow. He is buried at Jefferson Barracks National Cemetery.