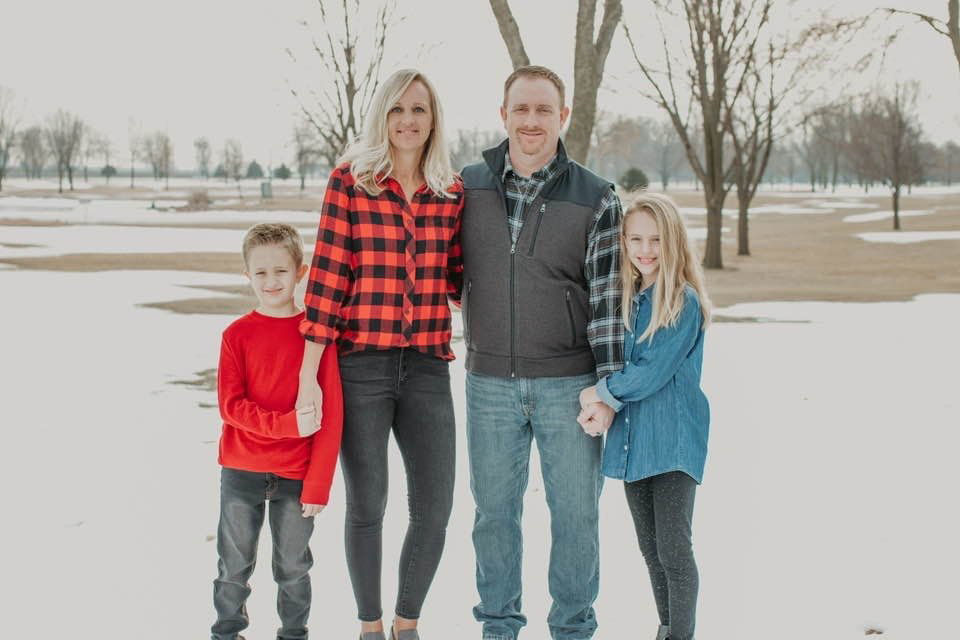 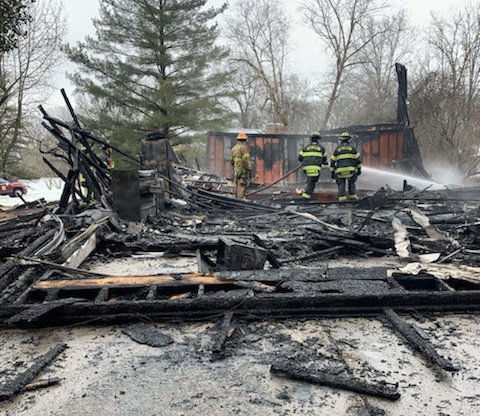 The home of UMSL women’s basketball coach Katie Vaughn burned down on Jan. 24, 2020. The family hopes to rebuild. Photo courtesy of Katie Vaughn

Katie Vaughn picked up her kids at elementary school, “which was unusual for them, since they usually ride the bus,” she said. “So they thought something exciting was happening.”

Before the heartbreak, there were heart cracks.

A series of them, from receiving the first phone call to picking up the kids, until Vaughn experienced the culmination of anguish — arriving at home and finding there was no home.

“Raw and emotional,” said Vaughn, the women’s basketball coach for the University of Missouri-St. Louis.

It was two Fridays ago. The UMSL women, after losing four of their past five games, were in last place in their conference. Their next opponent, the Flyers of Lewis University, were in first place. On the way, UMSL’s team stopped in Bloomington, Illinois, for a practice and film session.

“And my phone rang,” Vaughn said. “It was my neighbor, so I didn’t answer. She left a voicemail, so I read the voicemail (transcription), and she said in there: ‘Your house is on fire.’

“So I stepped out of the meeting and called her. She was very frantic and very emotional. There were five fire trucks at our house. … When I first read it, I was thinking, ‘OK, maybe it was a small fire. We’ll handle it.’ When she sent me the picture, it was like — what do you do next? You just go numb, really.”

The team was headed to Lewis, which is outside of Chicago. Vaughn got a rental car and headed back home to St. Peters. Imagine the nearly three-hour drive across the seemingly never-ending strip of highway, all the while just trying to get to a nightmare.

Finally, Vaughn made it and met up with her husband, Calvin. They picked up their kids, 9-year-old Ella and 8-year-old Evan. Together, the family of four arrived at the charred remains of what was once their home.

“(Your kids) don’t know what to do or think,” Vaughn said. “They just see things are gone.”

The house was destroyed, burnt to the ground. No one was inside during the fire.

The family of a girl on Ella’s soccer team invited the Vaughns to stay with them.

“We don’t have a lot of family around here, but friends have become family,” Vaughn said. “And you don’t realize the network you have until something like this happens. The outreach you get, from Texas to California to Connecticut, just everywhere.”

A GoFundMe page was created to accept donations for the Vaughns.

The next day, the head basketball coach couldn’t be with her team for a game. So she watched a livestream, alongside her daughter, Ella. Evan loves hoops — he’s sometimes spotted on the UMSL bench during games — but he had practice for his own basketball team that Saturday. Vaughn said it was “humbling” as she was unable to yell to her players during the game, though junior forward Alex LaPorta said, “I’m sure she was yelling at the screen from home.”

The UMSL team has a lot of younger players, and Vaughn said it’s been a process to develop consistency. She sure loves her team’s passion, though. But that made some of the losses even harder.

But that day at Lewis, something was different. The UMSL Tritons led at halftime … and after three quarters … and late in the game when, suddenly, Vaughn’s phone rang. Who would possibly call during the fourth quarter of a game?

It was one of her players.

Turns out the livestream was a couple minutes delayed.

“She didn’t even know that we had won,” LaPorta said, “But when we called her we were all screaming and yelling, so she was like, ‘Well, I guess we got the win!'”

The players wanted to share the moment with their coach as quickly as possible. And, of course, hear what LaPorta calls Vaughn’s “signature” yell.

“Any time we get a win, she always does. So we wanted to hear that after we got the win,” said LaPorta, who scored a career-high 23 points. “She just says, ‘YEAAAAAAAAH!’ Like, really excitedly. We usually kind of laugh at her for it, because it’s a goofy little yelp. But it always gets us pumped after we win.

“When she called, she was with her daughter, Ella. She’s grown up with us, too. So it was really emotional to see them. And obviously she was proud of us for how hard we played. I think we all felt that emotion there. … Everything just kind of felt right at that moment.”

Reunited with her team, Vaughn and the Tritons won their next game. Then they won again on Saturday.

“They realized to trust each other more than they were (on the court),” Vaughn said of her players. “So through all of this, that’s the good we’re taking out of it.”

After the big win at Lewis, Vaughn kept telling her players: “I hope you didn’t get that win for me. I hope you got it for yourselves.”

Looking back, LaPorta said, “We really did play super-hard for each other — and for coach. Even if she didn’t want us to play for her, I think we did that anyway.”

Hochman: Musial, The Man and gentleman, was as ‘nearly perfect’ as his 1948 season

Do you realize how good his ’48 season was for the Cardinals? Folks who participated in Saturday's drive-by 100th birthday honor probably do.

Hochman: In a totally 2020 twist, Mizzou's football team gets a new opponent named during game week

The Tigers could wins six games this year, if they can get in their remaining games.

"How do you navigate tough times and really stay true to who you said you were when it was easy to say that?" Pingeton asked.

Theo upped the stakes in the NL Central. He changed Cardinals history by changing Cubs history.

Hochman: Cardinals' Tommy Edman should hit better in 2021 at second base — and another Tommy could help

Breaking down the Cardinals' realistic options at second base for next year.

Dustin Johnson, who's raising a family with partner Paulina Gretzky, put on a Sunday show for all of us.

As a junior last season at Vashon, Kern averaged 12.1 points per game and 5.6 rebounds.

Hochman: State of the Cardinals is frustrating, but state of team’s pitching is intriguing

Most of the pitchers are back, too. We’ll see if they can be season-salvagers.

The home of UMSL women’s basketball coach Katie Vaughn burned down on Jan. 24, 2020. The family hopes to rebuild. Photo courtesy of Katie Vaughn