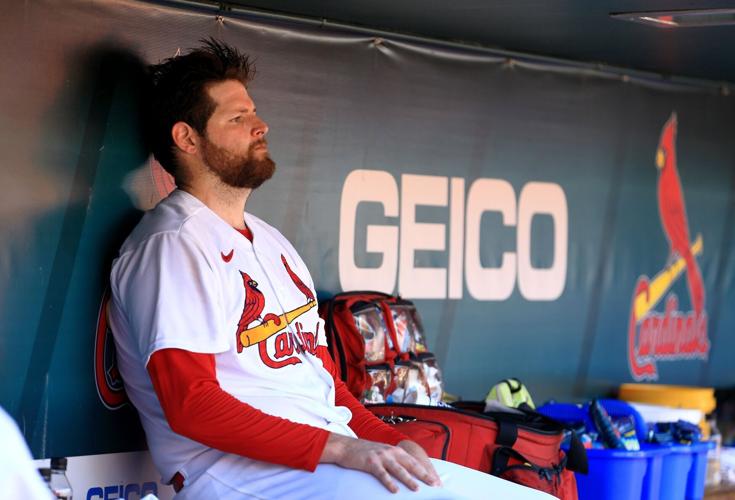 Cardinals pitcher Jordan Montgomery sits in the dugout after being pulled in the sixth inning against the Reds on Sunday, Sept. 18, 2022, at Busch Stadium. 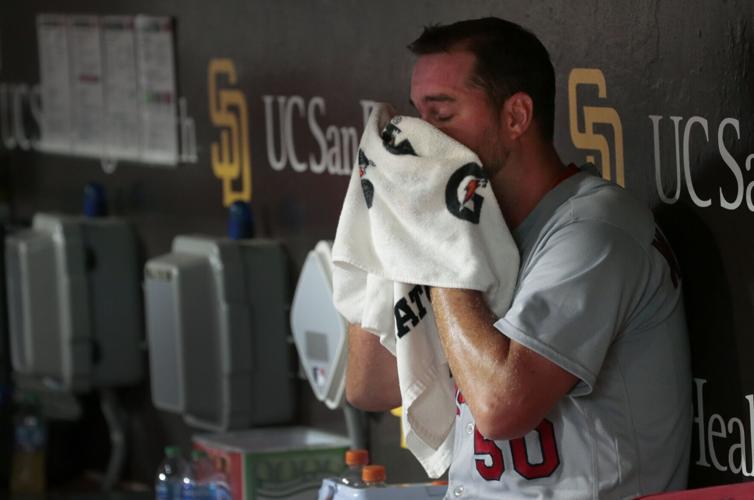 Adam Wainwright wipes off after pitching the fifth inning against the Padres on Tuesday, Sept. 20, 2022, in San Diego.

When September began, a good case could’ve been made for Adam Wainwright and Jordan Montgomery to start the team’s first two playoff games.

Now, you can make a case that neither should be in the wild-card playoff rotation.

The Cardinals are about to clinch a division title — normally a crowning moment of accomplishment and confidence — yet their starting pitching is concerning. This is all relatively speaking, of course. The Rockies — now there’s a team whose starting pitching is concerning. The Cardinals still have viable options for October. But a lot has been revealed this past month — and some exclamation points have curved into question marks.

Even Miles Mikolas, the rotation’s All-Star, has pitched inconsistently. He’s coming off a statement start against a possible playoff opponent in San Diego. But this isn’t like All-Star pitchers on, say, the Mets or Dodgers, who you simply hand the ball to and know a great start is coming. In the 11 previous starts before the San Diego game, Mikolas had a 5.11 ERA. That’s including earned run totals of 10, six, four and four.

Only twice since the break has he strung together consecutive starts with two or fewer earned runs allowed.

He’ll start Tuesday’s important game in Milwaukee — the Cards, likely the No. 3-seed in the National League postseason, would host a three-game wild-card series against the No. 6-seed, which either will be the Brewers, Phillies or Padres.

Now, perhaps the most-important game of the season was against the Padres. Not the Mikolas start, but the following day. It was last Thursday — the offense actually looked competent after a frightening stretch and Jack Flaherty looked like Jack Flaherty. He proved he could command a game with swing-and-miss stuff. Nine of the 18 outs he recorded were strikeouts. He allowed two earned runs and got the win in the quality start.

Before that performance, I would’ve been wary giving Flaherty the ball in the postseason. But with that start under his belt — and a tune-up this weekend against Pittsburgh — he should be good to go. Now, the walks are disconcerting — 11 in four September starts — but Ks play.

Interestingly, and perhaps tellingly, Cardinals manager Oliver Marmol went with Jose Quintana to pitch the second — and last game — of the Brewers series, not Flaherty. Marmol has gushed to the media about Flaherty’s abilities and toughness. Loves the kid. But the Brewers series setup makes one believe that Quintana is the No. 2 playoff starter. Heck, the way he’s been going, he could start Game 1, followed by Mikolas and Flaherty.

Consider Quintana has allowed two or fewer runs in the past 10 starts. That’s all of his starts for the Cardinals.

Yes, only two of the 10 were against winning teams. But he’s been consistent. And check out this stat. For the entire season, counting time with Pittsburgh, he has allowed just 0.45 homers per nine innings — that’s the lowest total for any starter in Major League Baseball.

That leads us to Montgomery and Wainwright, two huge reasons the Cards will make the playoffs to begin with, yet neither could see the mound in the wild-card round. If the opponent is Philadelphia, a lefty-heavy lineup, Marmol could and should consider Montgomery instead of Flaherty.

But Montgomery, albeit due to some bad luck, has sure struggled of late.

And with Wainwright, well, something’s up. Is it “dead arm” as he called it? Is it the natural regression of a 41-year-old pitching arm? Would rest do the trick? Or perhaps simply the juices that flow in the postseason?

But right now, Wainwright hasn’t pitched more than 6⅔ innings since August 18. Before that, he did it 10 times this year.

But this is hard for me to type — as of now, he shouldn’t start any of the three wild-card games.

Cardinals pitcher Jordan Montgomery sits in the dugout after being pulled in the sixth inning against the Reds on Sunday, Sept. 18, 2022, at Busch Stadium.

Adam Wainwright wipes off after pitching the fifth inning against the Padres on Tuesday, Sept. 20, 2022, in San Diego.