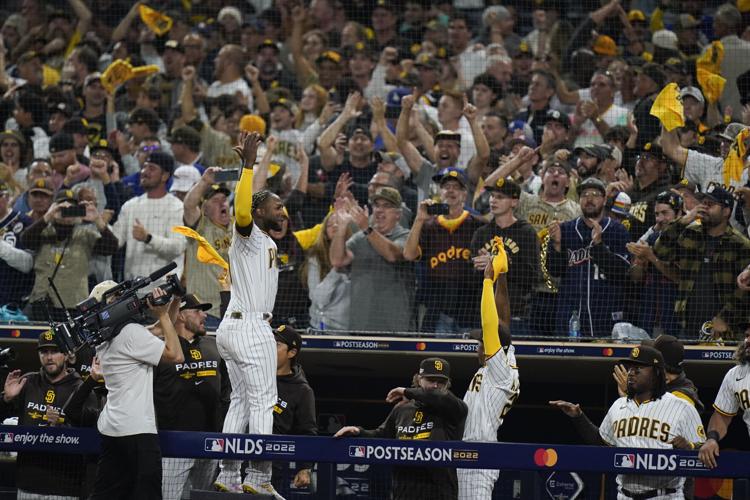 Members of the Padres celebrate with fans in the seventh inning if Game 4 of a Division Series against the Dodgers on Oct. 15, 2022, in San Diego. 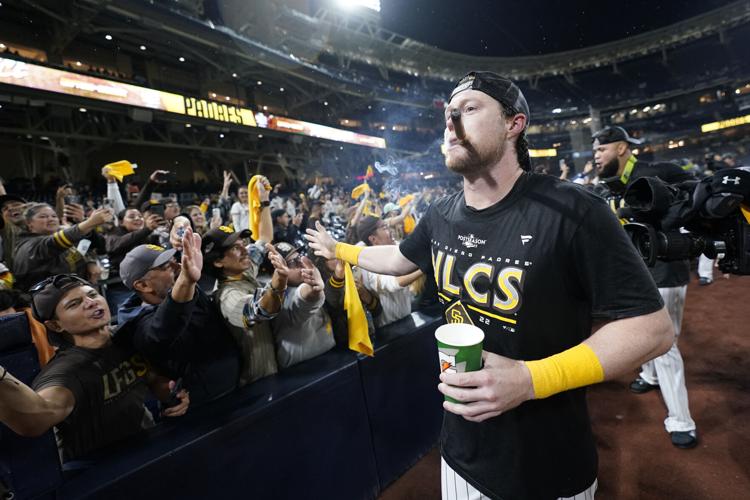 Padres second baseman Jake Cronenworth celebrates with fans after the Padres defeated the Dodgers 5-3 in Game 4 of a Division Series on Oct. 15, 2022, in San Diego. 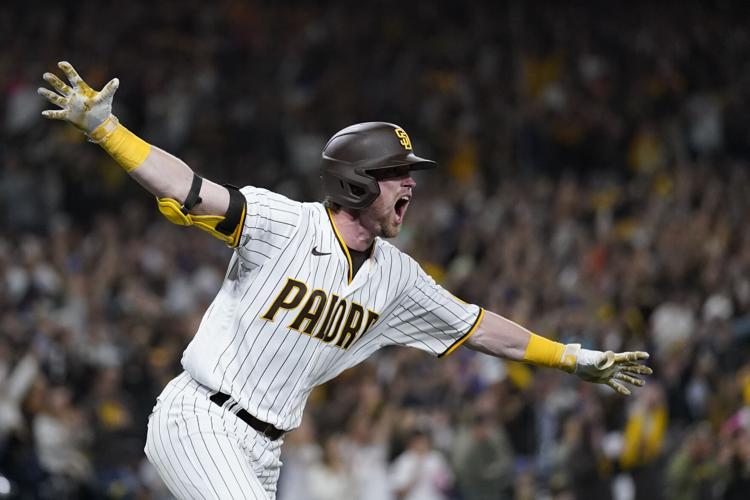 The Padres' Jake Cronenworth celebrates after hitting a two-run single in the seventh inning of Game 4 of a Division Series against the Dodgers on Oct. 15, 2022, in San Diego.

They were feeling a feeling they’d never felt, this strange mix of delirium and enthusiasm and — could it be? — optimism, all while they jumped and gyrated during a moment as rare as a rainy San Diego night.

Sure enough, it was a rainy night in San Diego — at times, just absolutely pouring — and it was perfect. As I watched Saturday from the comfort of my St. Louis home, dry and cozy and content, I wished I was there, soaking up this bliss. The fans experienced their Padres winning a National League Division Series for the first time since the month Juan Soto was born. And the Padres did so by knocking off, poetically and inexplicably, the mighty Dodgers in their mightiest of seasons.

Baseball, the late commissioner Bart Giamatti said, is designed to break your heart. We know that well here in St. Louis. The Cardinals won their division this season, yet didn’t even win a game this postseason. That said, the “you” of San Diego has sure been through it. Consider the franchise started in 1969 and has made the playoffs just seven times. The Cardinals made the playoffs seven times from 2013 through 2022.

The Padres have made the World Series twice (1984 and 1998) and won one total game. Entering this year, the last time the Padres made the playoffs in a 162-game season was 2006. Remember that postseason? When the Cards knocked them off en route to the title? Imagine if the Cardinals didn’t advance to the postseason from that year until the 2020 pandemic season? That’s San Diego.

Oh, and all along, the team up the street was dominant. Los Angeles, fittingly, is above the city of San Diego, looking down on this little town, perhaps the way Chicago does to St. Louis. The Dodgers, these blue devils, made the playoffs every year this past decade. Even when the Padres spent big, the Dodgers spent bigger. And this year, the Dodgers defeated the Padres 14 of 19 times in the regular season, which helped LA win 111 games. As an analyst on TBS, the Hall of Famer David Ortiz joked that the Dodgers were “the Padres’ padres.”

At the trade deadline, San Diego, of course, made many deals. The great Soto — born in October 1998 — arrived from Washington. Soon after, news broke that the likable star Fernando Tatis Jr., working his way back from an injury, was suspended for usage of a performance-enhancing drug. It sounded ridiculous, like a Mad Lib. But it was true. The Padres went just 31-27 after the trade deadline. Soto hit just .236.

October would be their playground.

It takes a village and one of the Padres is actually from the village. That’s Joe Musgrove, who hails from La Mesa in what they call the rolling hills of San Diego County. He was 13 in October 2006, when Padres catcher Mike Piazza misplayed an Albert Pujols pop-up foul … and Pujols homered on the next pitch in Game 1 of the NLDS. The Cards won the series.

Musgrove made the majors. He pitched for the 2017 Astros and won the World Series. But the Astros hitters cheated that season.

“I still don’t feel great about wearing that ring around or telling people that I was a World Series champion on that team,” Musgrove told The Associated Press this month. “I want one that feels earned and that was a true championship.”

Musgrove wears No. 44 for San Diego because his boyhood hero, pitcher Jake Peavy, wore No. 44 for San Diego. This season, Musgrove did something that no Padres pitcher ever had done — he threw a no-hitter. And then he won the decisive game of the Wild Card series against the Mets. And pitched well in the decisive game of the NLDS against the Dodgers. Musgrove told TBS that the Padres defeated “two Goliaths.”

That said, San Diego isn’t necessary David. The Padres’ payroll, around $237 million, is fifth-highest in baseball. The combined salaries of just Manny Machado, Yu Darvish, Wil Myers and Blake Snell are more than the payrolls of the Pirates, Guardians, Orioles and A’s.

Still, there was this Cinderella feel during the Dodgers-Padres series. The win disparity was a gulf — a la the 83-win Cards in 2006 (after defeating San Diego) against the 97-win Mets. But the playoffs, man.

Now, on one hand, the playoffs are a stage where the bravest, boldest and best players ascend. On the other hand, though, it’s a super-small sample size. And as we saw with the Braves and Dodgers, the new playoff system might hurt the top-two teams in a league. While the Phillies and Padres played, each team with a bye sat at home. As the old saying goes, were they resting … or rusting?

Also, the Phillies and Padres have good baseball players. Philadelphia is fourth in money spent (behind the Yankees, Mets and Dodgers). And, so, the Phillies will play the Padres in the National League Championship Series, beginning Tuesday in San Diego.

That was the site of the exuberant exorcism on Saturday night.

In San Diego’s stadium in the rain, every fan became a fanatic and fanatics became lunatics. And the coolest part was the players’ interactions — the dugout essentially was just the first row, as players screamed and waved their arms up, gesturing to the spectators in the same hats. And the chant of “Beat LA” was so loud, it must’ve made Boston proud.

And then, San Diego scored five runs in the seventh.

As it got louder and later in the night, while Josh Hader pitched the ninth, I wondered if the Padres fans actually might rush the field. It was this perfect confluence that could lead to a flood of fandom. Alas, they simply celebrated from the shaking, stadium stands on the rarest of San Diego nights.

Still, there are a number of young, likable players on the team and they have bashed their way through the AL side of the postseason.

Members of the Padres celebrate with fans in the seventh inning if Game 4 of a Division Series against the Dodgers on Oct. 15, 2022, in San Diego.

Padres second baseman Jake Cronenworth celebrates with fans after the Padres defeated the Dodgers 5-3 in Game 4 of a Division Series on Oct. 15, 2022, in San Diego.

The Padres' Jake Cronenworth celebrates after hitting a two-run single in the seventh inning of Game 4 of a Division Series against the Dodgers on Oct. 15, 2022, in San Diego.