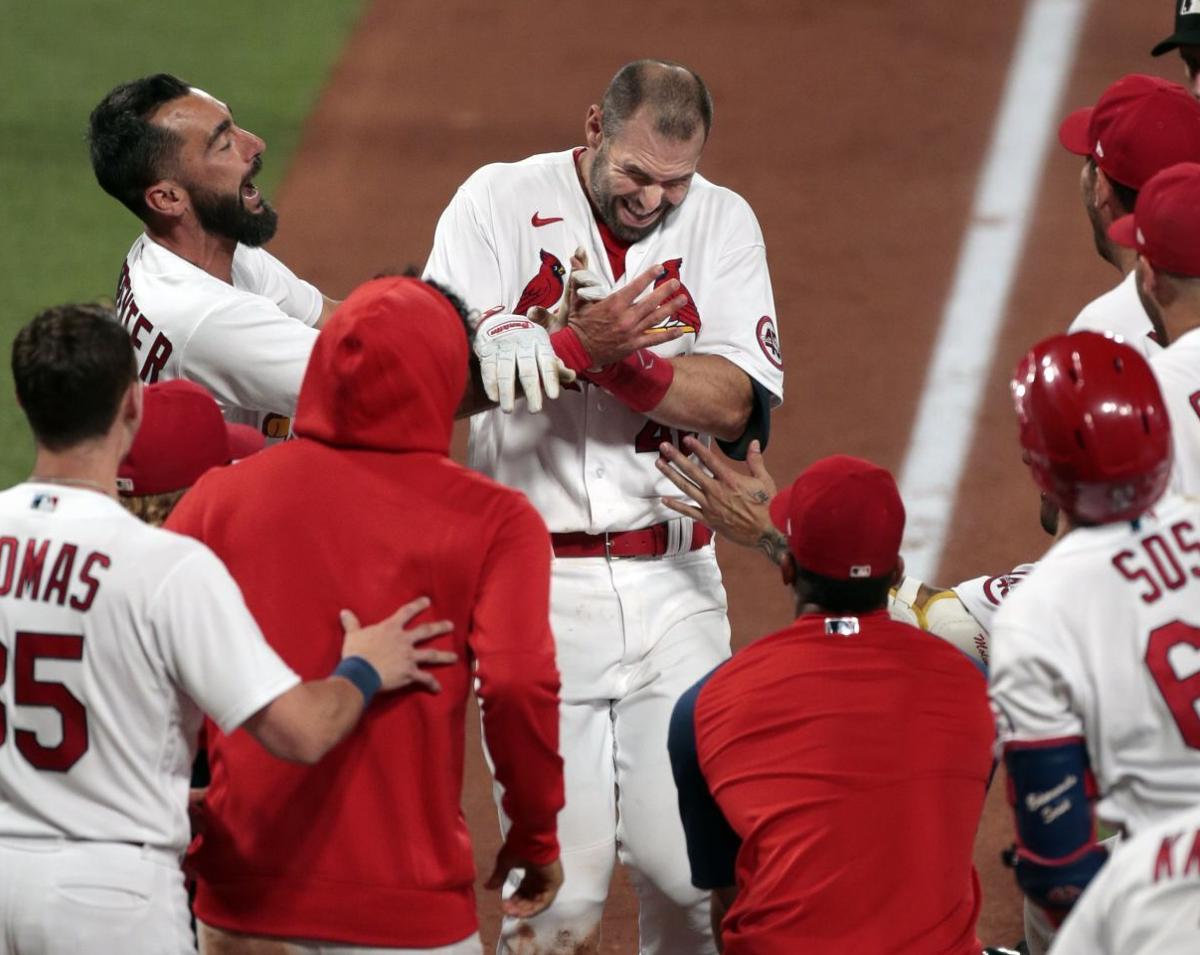 The Cardinals' Paul Goldschmidt is greeted by exuberant teammates at home plate after hitting a game-winning homer in the ninth inning against the Miami Marlins at Busch Stadium on Tuesday, June 15, 2021. The Cardinals won 2-1. (Robert Cohen, rcohen@post-dispatch.com) 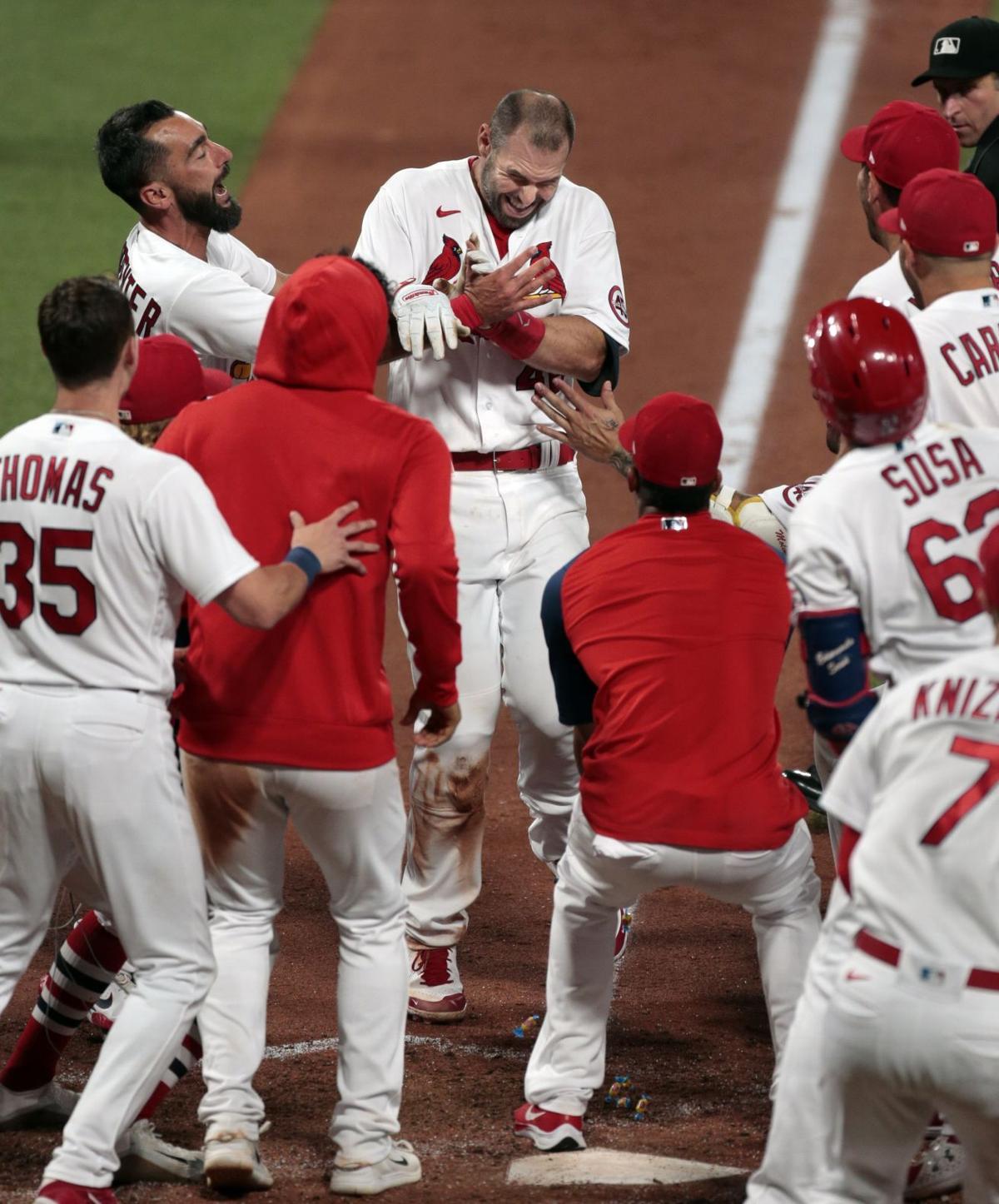 The Cardinals' Paul Goldschmidt is greeted by exuberant teammates at home plate after hitting a game-winning homer in the ninth inning against the Marlins last month.

Silver lining to the Cardinals’ first half? Goldschmidt’s liners.

Here’s thinking that Goldschmidt will help unlock some offense in the coming couple weeks. And these happen to be some season-defining weeks — a dozen games before the trade deadline.

Now, what about, you know, the other team’s seven hitters? Yeah. A little harder to be confident about the Cardinals’ offense overall. That said, with a healthy Harrison Bader hitting lately, and other players resting nagging injuries during the All-Star break, maybe the Cards can muster enough offense to win some ballgames. But definitely look for Goldschmidt to look more like the “Goldy” of the past (and I’m not talking about former Detroit outfielder Purnal Goldy).

Now, some people around town are down on Goldschmidt — he’s got a .265 batting average and .767 OPS this year — but let’s consider a couple facets here.

Two is that for this season — the entire season — his average exit velocity is fourth-best in the National League. Only three players hit balls harder on average: Manny Machado, Fernando Tatis Jr. and Ronald Acuna Jr., three superstars. So if the plan at the plate is to hit the heck out of the ball, then Goldschmidt is succeeding in his approach, even if it doesn’t show in his overall OPS — for now anyway. You’d think that over the course of 162 games, the fellows with the hardest-hit balls will have also produced significant slugging.

Speaking of slugging, Statcast calculates a statistic called expected slugging percentage. It sounds complicated, but it’s actually not too overwhelming. Statcast uses its exit velocity and launch angle measurements to give every batted ball a probability for being a hit. It can also classify whether the batted ball is expected to be a single, double, triple or homer, based on the results of comparable batted balls.

Yes, you’re probably just thinking — wake me when he starts actually slugging. And the response to that is — the data suggests it’ll happen soon … and that it’s already actually happening (Goldschmidt’s real slugging percentage since June 1, for instance, is .511).

“There are numerous reasons to be optimistic about Goldschmidt,” Cardinals general manager Michael Girsch said via email on Monday. “His average exit velocity, maximum exit velocity, hard hit percentage and strikeout rate are all at or near career bests. Despite his early struggles, ‘Goldy’ never wavered in terms of his approach or process and no one works harder at his craft. Since May 1st, he’s hitting about .290/.370/.475, so there is every reason to expect ‘Goldy’ to continue to perform up to his career standards in the second half.”

So, every Cardinal regular except Bader has a higher OPS in Cardinals wins than in losses. But no Cardinal has a greater disparity than Goldschmidt does in wins (.996 OPS) and losses (.537 OPS). When Goldschmidt hits, it’s generally in games the Cardinals shake hands afterward.

Of course, it’s nice when he hits and there are runners on some of the bases. And that’s why the Cardinals’ leadoff spot is so important heading into this stretch.

St. Louis leadoff hitters have an on-base percentage of .314. That’s second lowest in the NL, to Philadelphia. Goldschmidt and All-Star Nolan Arenado are either going to hit second and third or third and fourth in manager Mike Shildt’s lineup. Shildt should figure out a new way to generate some OBP from the top-two spots, perhaps with Bader or even Tyler O’Neill.

And Arenado has been really good this year — he’s batting third for the National League in Tuesday’s All-Star Game — but even he could deliver more of late. Just like Goldschmidt’s numbers got better in June and July, some of Arenado’s descended. Since a four-for-four game against the Reds on June 6, his OPS is .741 (and batting average is .217). And more recently, his OPS is July is .697. But a slumping Arenado still is better than most of the other hitters in the Cardinals’ lineup.

Goldschmidt’s recent success includes a .400 average in the past 10 games. Much of that success is credited to balls he’s not hitting. Shildt pointed out to reporters at Wrigley Field recently that Goldschmidt isn’t chasing as much. And so, he’s walking more. Indeed, in the 10-game sample size, “Goldy” walked six times. That included a pair of walks in the Cards’ win Saturday.

That night actually epitomized the guy. He went two for two with two walks. One of the hits was a homer that landed in Skokie. The exit velocity was 112.2 mph, the hardest hit ball in the game. The second-hardest hit ball? It was by Goldschmidt in his fifth trip to the plate — he drilled a ball 110.2 mph to third base and reached on a throwing error.

The Cardinals return to action in St. Louis on Friday. It will be a fascinating couple weeks of games, leading to the trade deadline. Here’s thinking Goldschmidt will do all he can to make the Cardinals buyers — or, if anything, non-sellers.

Hochman: ‘Craig does the dishes’ and other delightful revelations from Cardinals pitcher Kwang Hyun Kim

“I do want to play in the major leagues as a Cardinal for several more years," Kim said.

The Cardinals' Paul Goldschmidt is greeted by exuberant teammates at home plate after hitting a game-winning homer in the ninth inning against the Miami Marlins at Busch Stadium on Tuesday, June 15, 2021. The Cardinals won 2-1. (Robert Cohen, rcohen@post-dispatch.com)

The Cardinals' Paul Goldschmidt is greeted by exuberant teammates at home plate after hitting a game-winning homer in the ninth inning against the Marlins last month.