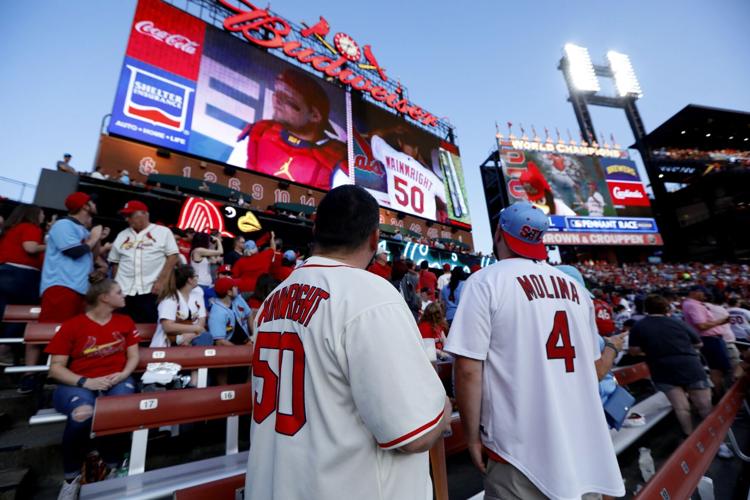 Fans Jake Kidd, left, and Ryan Doermar watch a tribute to catcher Yadier Molina before Molina and starting pitcher Adam Wainwright take the field together for the 325th time as a major-league battery for a game against the Brewers on Wednesday, Sept. 14, 2022, at Busch Stadium. 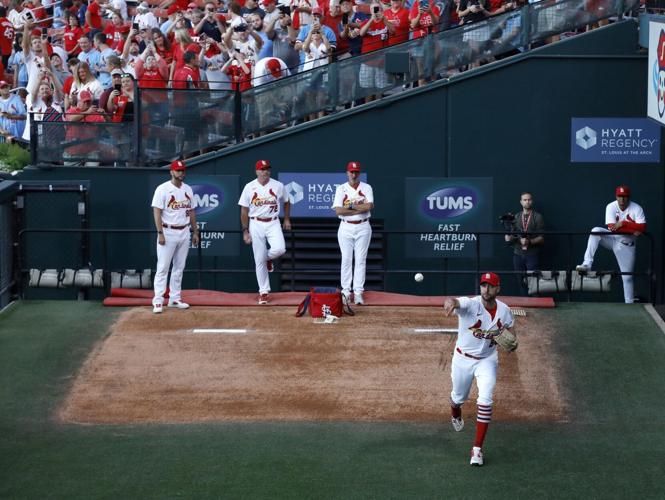 St. Louis Cardinals starting pitcher Adam Wainwright (50) warms up in the bullpen before the start of a baseball game against the Milwaukee Brewers on Wednesday, Sept. 14, 2022, at Busch Stadium. Wainwright (50) and catcher Yadier Molina (4) took to the field for the 325th time as a major-league battery, breaking the record set in 1975 when Detroit' Mickey Lolich and Bill Freehan got to 324.

The routine starts with No. 50 about 50 feet from Yadier Molina. Adam Wainwright, on the green in front of the bullpen’s brown mound, plays catch with the catcher.

Wainwright steps back to about 53 feet, then 57 feet and then, seemingly ceremonially, to 60 feet, 6 inches. At this distance, the battery is activated — Waino starts firing pitches as Yadi frames them.

Fans lean over the right-field barrier at Busch Stadium to take a picture or just to take it all in.

“These guys are my No. 1 and No. 2 favorite Cardinals ever,” said Dan Stout, 47. “It’s an emotional connection. And they have it with each other, which is why.”

At 6:39 p.m. on Thursday, Wainwright and Molina stepped onto the warming track from the bullpen gate. Seven minutes and 60 feet, 6 inches later, Wainwright started a game with Molina — for the 325th time.

“To have these guys breaking this record that should not be broken?” Stout said. “This is where I want to be.”

It’s hard to fathom that it happened, but it happened — in a modern era of free agency, Wainwright and Molina have now started more games as a battery than any duo in the history of Major League Baseball. The record was held, for nearly half a century, by Mickey Lolich and Bill Freehan of the Detroit Tigers.

The record says so much about Waino and Yadi — but it also speaks to their connection with this city. A kid from Georgia and a kid from Puerto Rico have become eternal St. Louisans, representing and encapsulating the pride of the Cardinals, the bond of friends, the passion for winning and the fun that can be had along the way.

Now, if Yadi never existed and Waino still had his exact Cardinals career, Waino would be a legend.

And if Waino never existed and Yadi still had his exact Cardinals career, Yadi would be a legend.

But the fact that their long careers were simultaneously parallel and intertwined? It’s a rarified relationship in sports. And it speaks to the sum of their parts. Waino is great, Yadi is great, but as a battery, they’re resilient and resplendent. And to their fans, they’re reliable and reassuring. Sure, there have been injuries over the years, but essentially since April 6, 2007, no matter what’s going on in your world, or in the world, Waino is pitching to Yadi every fifth game of the season.

“That was my draft year,” said Oliver Marmol of 2007 — the Cards manager played four minor-league seasons before becoming a coach. “A lot has taken place in that time span. That’s why I think this record is pretty darn cool, because I don’t see anyone coming close to touching it ever again.

“When you can be in the record book and know that it’s not going to be touched? Just to be able to have the career that Yadi’s had behind the plate with the same team — that’s a lot of years of catching — and then Waino being able to come close to matching him on years? Just to do it together for 325, it’s definitely meaningful.”

Another fascinating thing about their relationship was they were already ingrained in Cardinals history before their first start together. Think about it. Their first start was April of 2007. But in the postseason of 2006, Wainwright and Molina were the battery that ended the National League Championship Series and the World Series — both on strikeouts. They were forever in the picture.

Wainwright could’ve flamed out in 2007 and, in 2022, we’d still be talking about his curveball to Carlos Beltran. Instead, they started that 2007 day and went on to start 324 more games together. Actual batteries have died between 2007 and 2022, but this battery persisted into this autumn.

Now, other teams have other longtime players at other positions at the same time. And yeah, if Waino was at first base and Yadi in left field and they were teammates since 2005, it still would’ve been cool. But there is something about pitcher and catcher. This symmetry. This relationship. These two particular positions on the field that feed off each other, fulfil each other.

Other sports don’t have this. Maybe a quarterback and receiver, but a quarterback has multiple receivers on his team; a pitcher has one catcher. A pitcher can make a catcher better and vice versa. And that’s what has happened here — Waino has brought out the best of Yadi, and Yadi has brought the best out of Waino, and it happened start after start, year after year, postseason after postseason, from the aughts to the early 20s, from their 20s to their 40s.

Hochman: Cardinals closer Ryan Helsley has had hiccups of late, but should be OK

A curve, a keepsake, some Cherry Coke: How Cardinals Wainwright and Molina made history

Famed battery Wainwright and Molina set the major-league record with their 325th start together and Cardinals win, 4-1. But what about the first-pitch ball?

Hochman: As Albert Pujols nears 700 homers, a story of his kindness and the Musials

St. Louis Cardinals players Albert Pujols and Stan Musial are in their own stratosphere, both as ballplayers and men.

Fans Jake Kidd, left, and Ryan Doermar watch a tribute to catcher Yadier Molina before Molina and starting pitcher Adam Wainwright take the field together for the 325th time as a major-league battery for a game against the Brewers on Wednesday, Sept. 14, 2022, at Busch Stadium.

St. Louis Cardinals starting pitcher Adam Wainwright (50) warms up in the bullpen before the start of a baseball game against the Milwaukee Brewers on Wednesday, Sept. 14, 2022, at Busch Stadium. Wainwright (50) and catcher Yadier Molina (4) took to the field for the 325th time as a major-league battery, breaking the record set in 1975 when Detroit' Mickey Lolich and Bill Freehan got to 324.