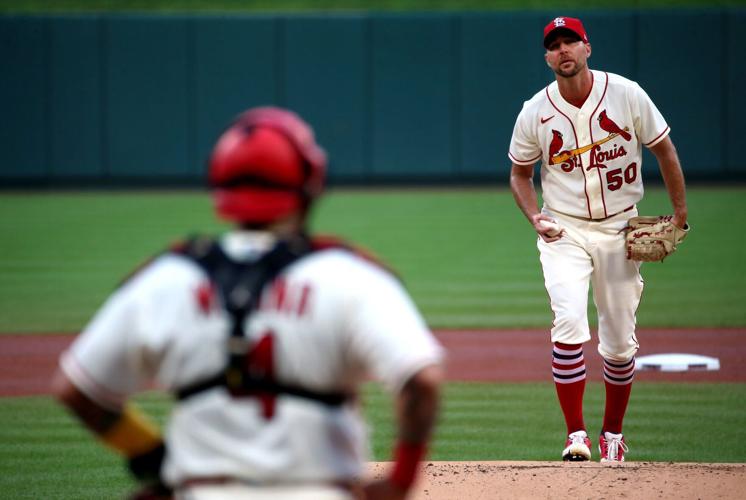 Cardinals starting pitcher Adam Wainwright goes to work in the first inning of a game against the Cubs on Saturday, Sept. 3, 2022, at Busch Stadium. 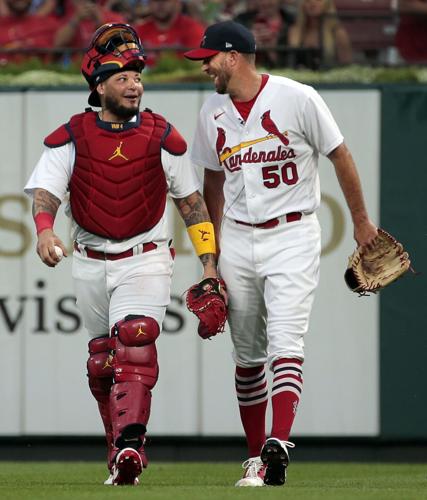 Cardinals starting pitcher Adam Wainwright and catcher Yadier Molina share a moment as they enter the field from the bullpen to face the Braves on Sunday, Aug. 28, 2022, at Busch Stadium. 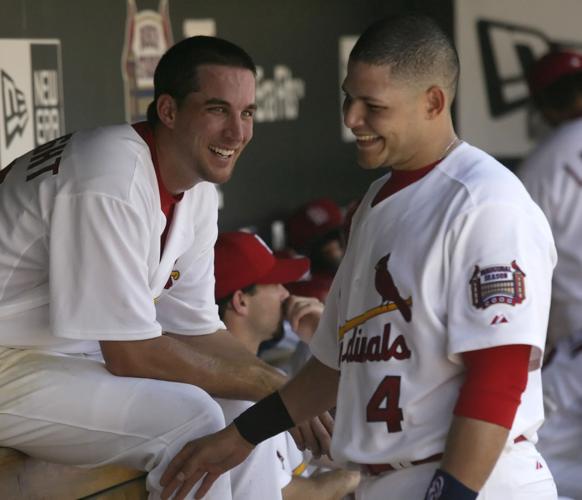 Cardinals pitcher Adam Wainwright, left, then a reliever, jokes with catcher Yadier Molina in the dugout on July 15, 2006, after pitching in the eighth inning and escaping a bases-loaded jam during a game between against the Dodgers at Busch Stadium.

Long before he was immortalized in Cooperstown and bronzed in front of Busch Stadium, Ted Simmons was just a boy who wanted to be a catcher. Well, a catcher, sure, but specifically one catcher.

“In Detroit, Bill Freehan was the guy, in the way that Molina, today, is the guy,” said the legendary Cardinals catcher Simmons, 73, who still resides in St. Louis.

On a May Tuesday in 1963, the rookie Freehan caught a kid making his first start. A lefty named Mickey Lolich. The game was the first of 324 that Lolich and Freehan would both start for the Tigers. The battery mates became icons in Detroit. Lolich, I begrudgingly bring up in the St. Louis newspaper, won the MVP of the 1968 World Series. And Freehan won seven Gold Gloves while making 11 All-Star Games.

“I listened to the Tigers on the radio every night,” said Simmons, who turned 14 in the summer of 1963. “It was radio and box scores and collecting cards. Hopefully you got a Detroit Tiger in one of the packs you bought. ... Every kid in my neighborhood aspired to be a major-league player. I ended up being the lucky one.

“By the time I was 14, I was pretty well-known as an athlete around the metropolitan Detroit area. Scouts back then could latch you up and take you to the ballgame and sit you down and impress you the best way they could.

“I went down to Tiger Stadium one time with one of the scouts, Lou D’Annunzio — and he introduced me to Freehan in the Tiger dugout. And he gave me one of his old gloves! I certainly remember that and was absolutely stark-raving crazy with joy when it happened.”

By 1968, the fast-tracked Simmons himself was a major-league catcher. He was a 19-year-old St. Louis Cardinals rookie, sitting in the dugout during the World Series against his boyhood heroes.

And in September of 1975, Lolich and Freehan were battery mates for the final time. Three-hundred-and-twenty-four starts. Most-ever by a pitcher and a catcher.

It was one of those records, especially with the dawn of free agency, that looked like it would never be matched.

And now, 47 Septembers later, Adam Wainwright and Yadier Molina are set to tie the record on Thursday. Cardinals-Nationals, 12:15 p.m. at Busch Stadium.

It’s an astonishing feat, one that encapsulates what makes each Cardinal great — talent and a dedication to St. Louis, as well as longevity and a little luck.

They made their first start together on April 6, 2007, a season after they made postseason history — defeating Detroit for the World Series title.

“As for the record, you can say, ‘Well, a guy (on another team) was unlucky. He was injured. And he wasn’t lucky enough — or otherwise he would have broken that record.’ But you don’t get to look at it like that. You either post up or you don’t. If you post up in the way that Yadi has, in the way that Wainwright has, these things happen to you.

“A lot of times, trust me, Freehan and Lolich, along with Molina and Wainwright, went to the post when maybe they shouldn’t have, because injuries were such that maybe their skill set that night might have been seriously, physically impaired. But then went anyway. Not because they were after some sort of record, but because their integrity to their team and to their teammates and to their city was such that they felt: it’s better that I go out there for our team and everybody, as opposed to sitting.”

Wainwright and Molina are forever linked in St. Louis. They’re in the highlight from Shea Stadium. They’re walking together in stride from the bullpen. They’re the names on the jerseys of so many fans. They’re in your fondest memories. And this year, Molina’s last, they’re on socks, hats and beer cans.

And someday, they’re going to be Cardinals Hall of Famers.

“And so in each one of those four players, they went out there, they posted up no matter what,” Simmons said of the two batteries. “That’s why that foursome ends up meeting at the crossroads here.”

Riding a .331 average and an OPS better than .900 at Class AAA Memphis, breakout hitter Burleson was added to the active roster. Carlson (thumb) placed on IL.

A sprain revealed in his left thumb was the cause of "nagging" pain that led to off-balance, sometimes one-handed swings and may have contributed to slump.

Yadier Molina and Adam Wainwright are set to tie the MLB record for starts as batterymates on Thursday afternoon.

Cardinals starting pitcher Adam Wainwright goes to work in the first inning of a game against the Cubs on Saturday, Sept. 3, 2022, at Busch Stadium.

Cardinals starting pitcher Adam Wainwright and catcher Yadier Molina share a moment as they enter the field from the bullpen to face the Braves on Sunday, Aug. 28, 2022, at Busch Stadium.

Cardinals pitcher Adam Wainwright, left, then a reliever, jokes with catcher Yadier Molina in the dugout on July 15, 2006, after pitching in the eighth inning and escaping a bases-loaded jam during a game between against the Dodgers at Busch Stadium.