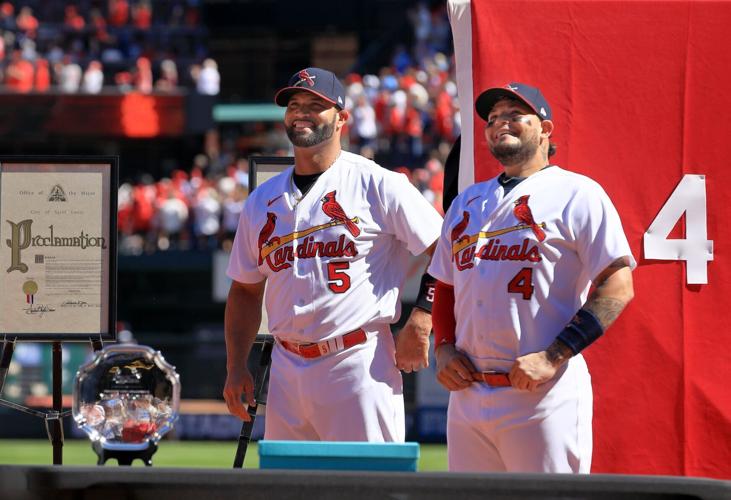 Soon-to-retire Cardinals greats Albert Pujols, left, and Yadier Molina enjoy a  ceremony in which they were honored before the start of a game against Pittsburgh on Sunday, Oct. 2, 2022, at Busch Stadium. 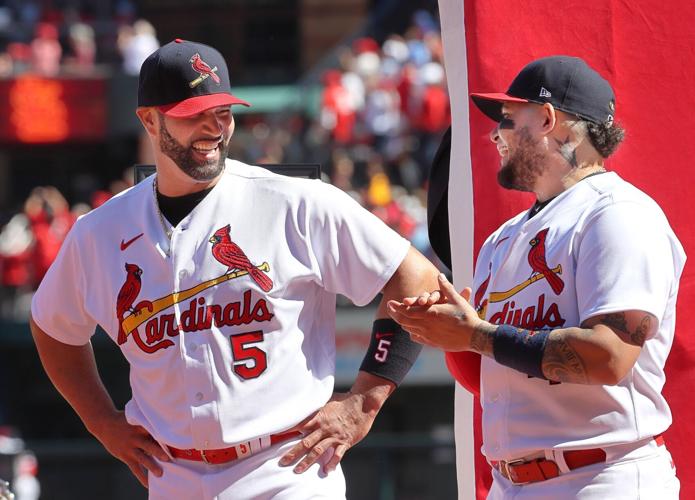 Cardinals greats Albert Pujols, left, and Yadier Molina enjoy a ceremony honoring them before the start of a game against the Pirates on Sunday, Oct. 2, 2022, at Busch Stadium. 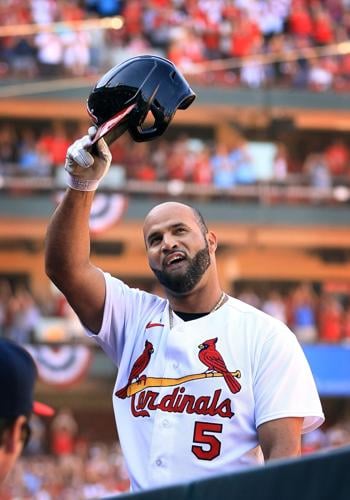 Albert Pujols takes a curtain call after he smashed career homer No. 702 in the third inning of a game against Pittsburgh on Sunday, Oct. 2, 2022, at Busch Stadium.

They say St. Louis English teachers used to write in and complain about Cardinals broadcaster Dizzy Dean, who sometimes would butcher the language, such as describing a player who “slud into third.”

With that in mind, consider my apologies to St. Louis math teachers as I share this:

Yadier Molina and Albert Pujols are St. Louis. They epitomize our city’s passion. They honorably represent baseball’s best fans, while performing some of baseball’s best baseball. And they exude an unflinching toughness that has provided civic pride.

And on Sunday, they fittingly were celebrated in a pregame ceremony, on the occasion of their final regular-season game at Busch Stadium. It was a pitch-perfect event with speeches and gifts (golf clubs and art). And it appeared that many fans had ordered hot dogs with freshly sliced onions.

“It is extraordinary when you have the opportunity to see two young players play together and you watch their friendship become a brotherhood. …” said John Mozeliak, the president of baseball operations and the man who drafted both players more than two decades ago. “It is a special friendship that became family.”

On Sunday, the unofficial theme of the day was — home. For a man from Puerto Rico and a man from the Dominican Republic, this city in the middle of America also is home. They are eternally welcomed here and forever revered here. Crouched behind home plate or stoically standing beside it, Molina and Pujols took up residence in St. Louis, where they called home for a combined 31 seasons. Thirty-one. So many home runs and runs crossing home.

And Pujols, of course, appreciates this city now even more.

When Pujols began to speak to the fans — as well as teammates, former teammates, family and friends in attendance — it became surreal to think from the following perspective. If he had retired instead of returning, he would’ve someday come back for a similar ceremony, and it would have been emotional and special. But then consider that he did come home to play one more year. And the year was amazing, even magical.

And so, the ceremony somehow was grander and more powerful than it already would’ve been.

“I’m really blessed to be back here,” Pujols said from the clubhouse, following a game in which he doubled and then, of course, homered in his final regular-season home regular-season at-bat. “And to finish my career where everything started for me. …

“If you look around, the history of this organization is all about winning, from bringing guys here that can play the game and developing them in the system. … There’s no better feeling than to raise a championship trophy at the end of the year.”

The quest for a third time begins Friday. The 40-somethings are back in the playoffs together — and will be relied upon as if it were 2005.

Albert’s second-half renaissance has been remarkable. Sunday’s homer gave him 23 this year, 702 for his career and 17 since the All-Star break. He hit the 17 in only 153 at-bats. Per statistician Tom Orf, only four times has a player ever hit 17 homers in 160 or fewer at-bats in the second half of a season.

And even Molina has had a bit of rejuvenation this fall, following his fall. On September 1, his batting average was .200. But since, he has hit .273 with a slugging percentage near .500.

For the future Hall of Famers, this entire season has been one big goodbye and thank you. But Sunday’s ceremony was the culmination. The crowd arrived early, sardined on the sidewalks and filled the stadium for the show. The roars were resounding — as if each of the 46,680 people wanted Yadi and Albert to hear them and take in their appreciation via applause.

“Yeah, that was cool,” Cardinals pitcher Adam Wainwright said. “That was a cool time for Albert and Yadi and our whole team to see how St. Louis celebrates some of the greatest players ever — not just Cardinals, but players ever. …

“I just think this is probably the best I’ve ever seen our crowd — ever — since I’ve been here. I think we’ve been showing up like it’s the playoffs in regular-season games. And I’m sure these guys retiring has something to do with that. But we played some good baseball this year. …

“There are only a couple places in all sports that have this kind of town — not just baseball, but all sports. So it’s been it’s been a blessing over the years to be here and to be with who I’ve been with.”

The progression of baseball's home run record: How Pujols stands with the greats

Photos: Scenes from the last regular-season game at Busch Stadium

Soon-to-retire Cardinals greats Albert Pujols, left, and Yadier Molina enjoy a  ceremony in which they were honored before the start of a game against Pittsburgh on Sunday, Oct. 2, 2022, at Busch Stadium.

Cardinals greats Albert Pujols, left, and Yadier Molina enjoy a ceremony honoring them before the start of a game against the Pirates on Sunday, Oct. 2, 2022, at Busch Stadium.

Albert Pujols takes a curtain call after he smashed career homer No. 702 in the third inning of a game against Pittsburgh on Sunday, Oct. 2, 2022, at Busch Stadium.