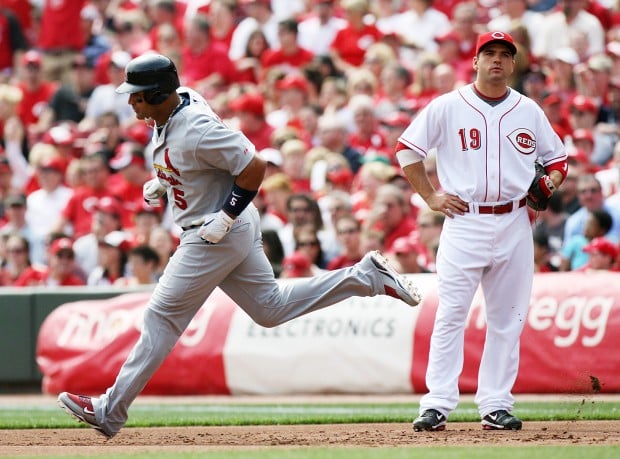 April 5, 2010 -- Cardinals' Albert Pujols rounds the bases past Cincinnati first baseman Joey Votto after hitting a solo home run in the first inning during the season-opening game between the St. Louis Cardinals and the Cincinnati Reds at Great American Ballpark in Cincinnati, Ohio. Chris Lee clee@post-dispatch.com 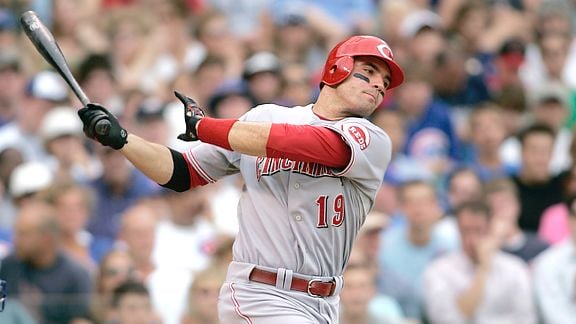 I hope everyone had a pleasant 4th of July weekend.

I don't get too worked up on All-Star selections. It is what it is. The fans screw some things up in the voting, but in some respects the players and the manager do an even worse job. But the problem is, the game isn't clearly defined. Is it an exhibition, a showcase of stars? Or is it a true competition?

The latter is a concept promoted by commissioner Bud Selig, who decided to give homefield advantage in the World Series to the winning league. But that's ludicrous on many levels. If it's a real competition you wouldn't (1) force a player from every MLB team onto the roster (2) allow a manager like Charlie Manuel to put an undeserving player -- Ryan Howard -- from his own team onto the All-Star roster; (3) remove from the game a starting pitcher who has great stuff and is mowing down hitters; (4) replace a hot hitter halfway through the game so you can work everyone in; (5) include starting pitchers who are unable to work because the game conflicts with their rotation assignment.

So what we have here is a half-serious, half-showbiz event. It's supposed to be entertainment, which is why Selig and the FOX network need to stop pretending it really "counts." Because the game isn't set up in a way to assure a legitimate competition.The rosters aren't selected with one overriding purpose in mind: to win.

Anyway, since it's fun to kick these things around, here are the players who should be starting for the National League based on first-half performance rather than popularity or past accomplishments:

CATCHER: Miguel Olivo, Colorado. This one is an easy call. He leads all NL catchers in OPS (.905), RBIs (39), batting average (.308) and is tied for first with 11 homers. And according to STATS he's thrown out 48.2 percent of base stealers that try him, which is the best percentage in the NL.

FIRST BASE: Joey Votto, Cincinnati. It's a fairly close call, Votto over Albert Pujols, but I'm not going to be a homer here. Votto deserves it. His exclusion (so far) from the NL roster is the biggest All-Star travesty in many years. As we type here today, Votto is probably the leading candidate to win the league MVP award. And he isn't worthy of All-Star inclusion, even as a back-up? Selig should have intervened and blocked Manuel from putting his own guy (Howard) on the roster instead of Votto. (Howard is 7th among NL first basemen in OPS. And 5th in slugging -- and isn't that the reason why Howard is paid what he is, to slug?) Anyway, Votto leads NL first basemen in homers (21), is 2nd in RBIs (59), has the top batting average (.318), and top OPS (1.015). Votto is also a +6 as a fielder in the Dewan "Fielding Bible" ratings compared to a +2 for Pujols.

SECOND BASE: Chase Utley, Philadelphia. In a very slight edge over Florida's Dan Uggla. (Utley won't be able to play in the game; my picks were made based on how the players performed in the first half.) Uggla and Utley are tied for the lead in OPS among NL 2B, .852. Uggla is first in homers (16), second in RBIs (49), and tied for 4th in batting average (.278). Utley is also hitting .278 but doesn't have as many homers or RBIs as Uggla. There's a big difference in defense; Dewan has Utley as a +18, which is No. 1 in the league at the position. Uggla is playing solidly at 2B this season; ranked 18th in the majors in plus-minus. But Utlley is still the guy. This is a really strong position for the NL this season; Cincinnati's Brandon Phillips, Atlanta's Martin Prado, Milwaukee's Rickie Weeks and Arizona's Kelly Johnson  are all worthy of recognition.

SHORTSTOP: Hanley Ramirez, Florida. His .877 OPS is tied for second among league shortstops and he leads in HRs (13) and RBIs (53). He's also stolen 15 bases.

THIRD BASE: David Wright, NY Mets: Leads NL third basemen in OPS (.952), batting average (.321) and RBIs (63). He's also a +4 fielder according to Dewan, which is a tad better than Cincinnati's Scott Rolen.  Rolen's terrific first half wasn't quite enough to bump Wright from the starting job. But close.

Before we discuss the outfield picks, let me say this: I did it by position, rather than choose the three best overall outfielders. If I just selected the OFs no matter where they played, obviously the picks would have a different look. But I wanted to be true to position. The way it is in "real" baseball.

CENTER FIELD: Marlon Byrd, Chicago. This was perhaps the toughest pick for me to make, because the Cardinals' Colby Rasmus has the best OPS (.901) among league CFs. But Byrd has quietly put together a very fine season in Chicago. His OPS is good (.828), he has the best batting average (.305) among CFs, he's knocked in 36 runs, and leads league CFs with 26 doubles. And Byrd has a distinct advantage over Rasmus in defensive metrics; according to Dewan Byrd is a +11 center fielder; Rasmus is a minus 8. That's a huge difference.

RIGHT FIELD: Corey Hart, Milwaukee. You could probably flip a coin to decide between Hart and LA's Andre Ethier.  Hart leads all league RFs in homers (19) and RBIs (61) and has a strong .917 OPS. Ethier has the better OPS (.947) and batting average (.324.) Both are below-average defensively, but Ethier is worse out there, with a minus 10 rating from Dewan.

STARTING PITCHER: Josh Johnson, Florida: He doesn't get the attention he deserves. Johnson is 8-3 with a league-best 1.82 ERA. He's among the leaders in strikeouts. He's allowed two earned runs or fewer in 14 of 17 starts and hasn't given up more than four runs in a  start -- and that happened only one time this season. Baseball Prospectus rates him No. 1 among league starting pitchers in VORP (value over replacement level.) He's allowed the second-lowest OPS among NL starting pitchers.

CLOSER: Brian Wilson, San Francisco. A slight edge over LA's Jonathan Broxton. But there isn't not much difference between the two.

Penny told team officials that he felt a tightness in his triceps, near where he had upper back muscle strain.

Earlier on Tuesday, I offered my opinion on who should be starting for the National League All-Star team. Here are the American League players…

DENVER -- Cardinals outfielder Matt Holliday got the invitation Tuesday morning and it didn't take long for him accept.

The daily 10@10 offers a quick way to judge contenders by looking at the three phases of the game.

April 5, 2010 -- Cardinals' Albert Pujols rounds the bases past Cincinnati first baseman Joey Votto after hitting a solo home run in the first inning during the season-opening game between the St. Louis Cardinals and the Cincinnati Reds at Great American Ballpark in Cincinnati, Ohio. Chris Lee clee@post-dispatch.com