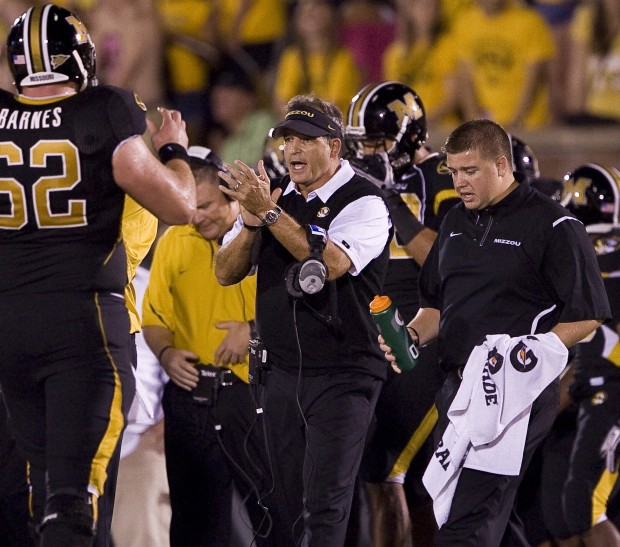 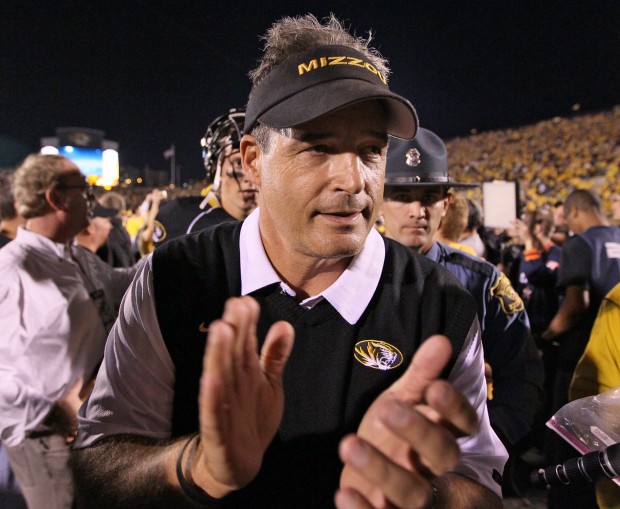 October 23, 2010 -- Missouri head coach Gary Pinkel claps as he leaves the field after a game between Missouri and Oklahoma at Faurot Field in Columbia, Mo. Chris Lee clee@post-dispatch.com 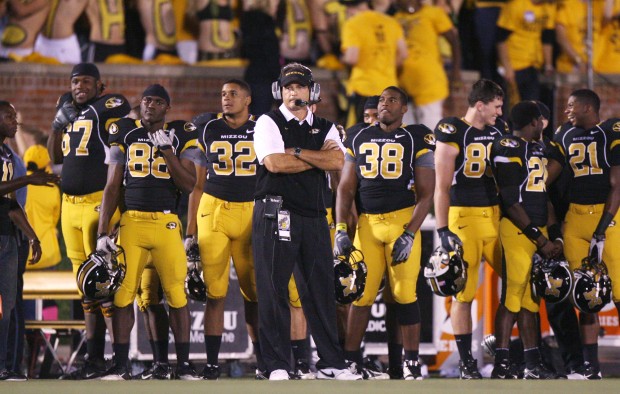 Missouri has been making it look easy. In their last three games, the Tigers have shut out Colorado, blown out Texas A&M and punched out Oklahoma. The goal posts at Faurot Field have been torn down. And the MU program has gone up, rising to No. 6 in the latest BCS ratings. The state has gone mad, again, for Missouri football.

Coach Gary Pinkel is a Harley man, and though his Tigers aren't exactly like the hardscrabble gang from "Sons of Anarchy," Mizzou is becoming the kind of team you don't want riding into your town to cause trouble.

At least we think so. We'll know a lot more by early Saturday evening, after the Tigers are done rumbling with the Pelini boys on the Nebraska plains.

This one has the grudge-match feel. Nebraska bolted the Big 12 Conference for the Big Ten Conference in a brazen money grab, and NU's president took some shots at Missouri as he reached for the loot.

Nebraska coach Bo Pelini has done a superb job of rebuilding the Cornhuskers program after the failed Bill Callahan experience. But Pelini and his brother Carl, the team's defensive coordinator, are a little full of themselves. The Cornhuskers all but awarded themselves the Big 12 North championship before the season, perhaps forgetting that Missouri actually intended to compete for the title.

All of the chickens are coming home to roost in Lincoln on Saturday.

This is a big game.

For the Big 12 North chase. For BCS angling. For the last hurrah, with the historical Missouri-Nebraska rivalry coming to a close. For the Gabbert family. For the three young men from the St. Louis area — Keith Williams, Mike McNeill and Will Compton — who are on Nebraska's roster.

And it's a big one for Pinkel's program.

To this point, this has been one of Pinkel's best coaching jobs at Ol' Mizzou. The Tigers are 7-0 overall, 3-0 in the Big 12, and they've persevered through injuries and turmoil. Pinkel took a strong, ethical stand by removing his top running back, Derrick Washington, from the squad after Washington was charged with sexual assault. This followed multiple alcohol-related arrests in the football program that put Pinkel on the spot.

The Missouri defense has been among the nation's best, allowing 13.6 points a game despite the absence of pass-rushing fiend Aldon Smith and five regulars who missed games with injuries. There was the sluggish beginning to the Illinois game. The close-call victory over San Diego State. The need to form a committee at running back.

Missouri's passing game lacked sizzle with wideout Jerrell Jackson limited by a broken bone in his left wrist. (He's fine now; just ask the Sooners.) The Tigers could have stumbled along the way, but instead of falling down they've improved. This Pinkel team seemingly packs more muscle than what we've seen in the past. The offensive line is physical and edgy. The MU defensive line is walloping quarterbacks.

The resilience has been impressive.

And that won't matter much if Missouri goes down, hard, at Nebraska. Now that Missouri ended its misery against Oklahoma, the next challenge is to venture into hostile territory and win on the road against a ranked opponent. According to STATS LLC, Pinkel's Missouri teams are 0-9 when they face a Top 25-ranked team on the road.

Pinkel's MU résumé is interesting. He's in his 10th season. He's elevated the program in ways that Warren Powers, Woody Widenhofer, Bob Stull and Larry Smith could only fantasize about. He's outlasted all of the decent, well-intentioned, hard-working coaches who were crushed by this job and the weight of trying to lift MU back to the level attained by Dan Devine.

Because Pinkel has been in Columbia for so long, there's a tendency to forget about the lost generation of Mizzou football and the futility that seeped, like poison, into the program. We dwell on Pinkel's failures — say, the beatdowns administered by Texas and Oklahoma — rather than embrace his many successes. MU was No. 1 in the nation for a week in 2007. How can we ever forget, or downgrade, that?

Sure, we can criticize Missouri's soft schedule. I've done that. But since 2007, only Texas and Oklahoma have won more games in Big 12 conference play. (The count: Texas 22, Oklahoma 20, Mizzou 19.)

What's that? You say the Mizzou conference record has been padded by patsies in the Big 12 North? Well, there's some truth to that. But there's also more to it than that. It's not as if Mizzou is always forced to run away, weeping, after taking on ranked teams. Yes, there have been horrible losses to Texas and OU. But since the start of the 2007 season, the Tigers are 7-8 in games against Top 25 teams. In the Big 12, only Texas (10-4) and Oklahoma (13-7) have done better than MU over that time when facing Top 25 opponents.

Pinkel is getting his share of victories against notable teams. He's opened recruiting pipelines in Texas. He's given more of Missouri's best high school players a reason to stay home.

The glorious triumph over Oklahoma was one.

And now Nebraska looms as another huge test for Pinkel power.

Why turn something so beautiful -- school spirit -- into something unlawful? It's stupid.

Harsh criticism followed arrest of 30 fans for trespassing after thousands rushed the field.

Browse a video archive of Mizzou's top college football moments: from the MU-KU showdown to the victory over Oklahoma.

QB Gabbert went the entire game against OKlahoma without being tackled in the backfield.

Pelini and staff will have a lot of homework before Nebraska competes in Big Ten.

Blaine Gabbert's road to the NFL

Tools are all there for Mizzou QB to compete at next level, but it will take more than that.

MU's sale of Faurot Field photos clashes with arrests there

COLUMBIA, MO.  • The mad rush of Faurot Field after the Missouri Tigers' historic win over the top-ranked Oklahoma Sooners has left some fans …

October 23, 2010 -- Missouri head coach Gary Pinkel claps as he leaves the field after a game between Missouri and Oklahoma at Faurot Field in Columbia, Mo. Chris Lee clee@post-dispatch.com