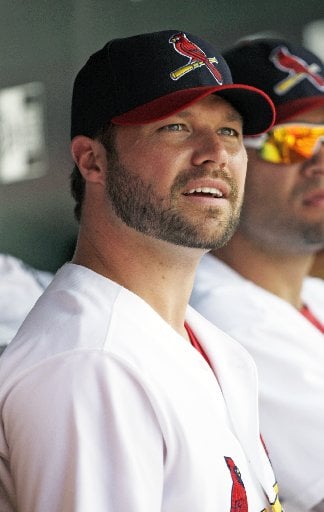 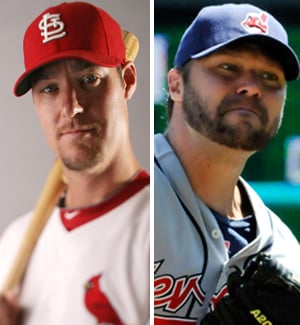 My first thought after hearing that the Cardinals had given up Ryan Ludwick for a No. 4 starter, Jake Westbrook: The winning GM in the deal was Walt Jocketty.

Jocketty, of course, is competing against the Cardinals from his new power chair in Cincinnati.

And this seems to be a beneficial transaction for Jocketty and the Reds. I say this because the Cardinals, who strain to score runs, just expunged a proven hitter from their lineup. Ludwick, unlike some of the team's baby birds, has an impressive history of putting up numbers in the majors. Since the start of the 2008 season, Ludwick ranks second in RBIs, third in homers and fourth in slugging percentage among NL outfielders.

I understand why the Cardinals wanted Westbrook, who should be a solid fit. There's been slippage at the back end of the Cardinals' rotation and La Russa and pitching coach Dave Duncan want to reinforce it. That's fine. Westbrook isn't a dominant pitcher. He doesn't get many swings and misses. But he does offer added stability. The Cardinals believe Westbrook will provide innings but we should not assume that; Westbrook went seven innings or more in only seven of 21 starts for the Indians this season.

In theory, I'm not opposed to the idea of acquiring Westbrook, a noted ground-ball habitue who matches Duncan's philosophy.

And I'm not opposed to the idea of trading Ludwick, either.

I'm just opposed to trading Ludwick for the lone return of Westbrook.

When you have a lethargic offense, you don't give up an above-average run producer for an average starting pitcher. And that's especially true in a summer 2010 trade market that's seen a devaluation of starting pitching.

This was a three-way trade involving the Cardinals, Cleveland and San Diego, with Ludwick headed to SoCal.

It could have been a game of three-card Monte, with the Cardinals getting snookered.

The Philadelphia Phillies didn't give up much to acquire a No. 1 starter, Roy Oswalt, from Houston.

Starters who pitch above Westbrook's level were auctioned off, and buyers didn't have to give up the farm. So I am baffled as to why the Cardinals felt it necessary to sacrifice Ludwick -- an established asset -- for a two-month rental of Westbrook.

Ludwick wasn't walking after the season. The Cardinals controlled his rights through 2011. So if they were going to move him, they had to do better than this. This deal was made because manager Tony La Russa and GM John Mozeliak declared a state of emergency.

"Our offense is a work in progress and Luddy's been a productive and clutch guy," La Russa said. "But if we don't add a quality starter we've got a tough road ahead. It was critical."

Said Mozeliak: "The fact is, if we didn't change the current dynamics of this club right now, I couldn't envision us winning."

You think trade partners may have picked up on that desperation?

I can't figure out why it was impossible to land Westbrook straight-up from Cleveland for a decent prospect. Westbrook is a free agent after the season. His peak years are over. And Cleveland, a non-contender, doesn't need him.

To make matters worse, the Cardinals not only cut the cord on Ludwick's power, but plugged it into a weak San Diego lineup that ranks 14th in the NL in slugging. Moreover, San Diego looms as a potential STL postseason opponent. The Cardinals declined to fix their own offense but didn't hesitate to strengthen San Diego's?

The Cardinals have two problems from what I can tell:

2. For some reason, the people running the franchise cannot see this. That, or they do not feel the urgency to do much about it. And this is not a new pox. The lineup malaise didn't start, say, last week. This is virtually the same lineup core that misfired late last season and scored only six runs in an embarrassing three-game sweep by the Dodgers in the NLDS.

The Cardinals have lined up Westbrook to replace the injured Brad Penny in the rotation. (And we suspect the Cardinals wanted insurance on rookie Jaime Garcia, just in case he wears down.) But will anything change? The Cardinals had a 4-5 record in games started by Penny this season and scored only eight runs, total, in those five losses. So if they couldn't score for Penny, then why would we expect routine offensive explosions in support of  Westbrook?

Granted, Ludwick was a part of that wheezing offense. So if the Cardinals want to argue that point, fine.

Mozeliak was alluding to the Cardinals' recent eight-game winning streak that occurred with Ludwick on the disabled list. And the team did average 5.8 runs in those eight games, sans Ludwick. But does an eight-game sample size prove much?

Rookie outfielder Jon Jay has played exceptional baseball for the Cardinals — though it must be added that he's hitting .446 on batted balls in play, and that won't last. Jay had a combined onbase-slugging percentage of .799 in the minors, so his numbers will eventually drop. And now Jay will have to cope with the added pressure of being a fixture instead of a role player. This will be a different assignment for Jay, and we'll see how he handles it.

It's possible for a right-field platoon of Jay and Allen Craig to generate enough offense to approximate Ludwick's wattage for the short term. And another side benefit is that Colby Rasmus will play just about every day instead of being frequently sent to his room. Raz must come through now. And La Russa has to place more confidence in his second-year center fielder.

There's a bit of a traffic jam in the outfield, and to that extent the Cardinals were dealing from surplus. And this isn't the end of commerce; it's still possible for the Cardinals to acquire a bat this month as long as the player has cleared waivers.

Mozeliak insists he looked for a bat but found a thin marketplace for hitters. If no legit bat was available to add to the lineup, that's one thing. But it doesn't justify taking Ludwick's bat out of the lineup.

Part of this had to be based on finances. Ludwick will probably make around $8 million next season, and La Russa strongly suggested that it would be difficult to carry that salary in 2011. So payroll limitations may have forced a Ludwick trade, anyway. But the Cardinals probably could have gotten more for Ludwick by waiting until the offseason.

"We had a chance to win now," La Russa said. "This winter is too far away."

But unless the Cardinals' offense improves dramatically, the cold front will arrive a lot sooner than Mozeliak and La Russa think.

The Cardinals lineup continued its weekend feast on woeful Pittsburgh for a 9-1 victory Sunday.

Mozeliak's bottom line on the trade: "If we didn't change the current dynamics of this club right now, I couldn't envision us winning."

Cardinals welcome addition of Westbrook but lament the loss of a team favorite.