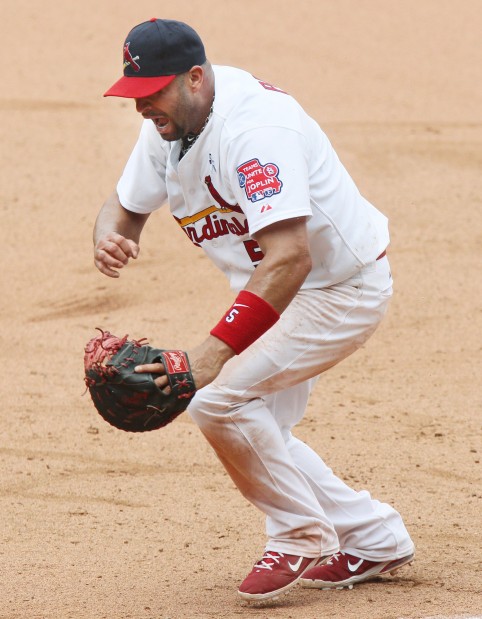 June 19, 2011 -- Cardinals' Albert Pujols yells out in pain after colliding with Kansas City's Wilson Betemit on a play at first base in the sixth inning during a game between the St. Louis Cardinals and the Kansas City Royals at Busch Stadium in St. Louis, Mo. Pujols was injured on the play and replaced in the field by Lance Berkman. Chris Lee clee@post-dispatch.com 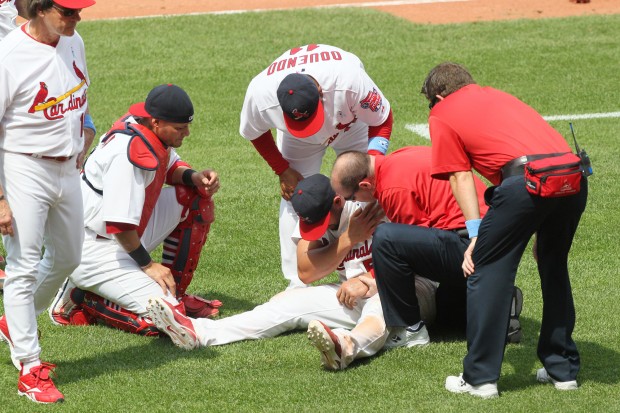 June 19, 2011 -- Cardinals' Albert Pujols gestures to his left shoulder as he is tended to by head trainer Greg Hauck after being injured in a collision at first base in the sixth inning during a game between the St. Louis Cardinals and the Kansas City Royals at Busch Stadium in St. Louis, Mo. Chris Lee clee@post-dispatch.com

Pujols has broken bone in arm; out 4-6 weeks

This is Bernie Miklasz's column about Albert Pujols that was published Sunday night:

Have you ever seen 41,660 frightened people hold their breath at the same time? Well, it happened Sunday afternoon at Busch Stadium. There was a collision at first base. Albert Pujols tumbled like a bowling pin. He stayed on the ground clutching his left wrist, writhing in agony.

Down goes the franchise player.

Just about everyone in the place imagined the worst-case scenario: broken wrist, broken dreams.

"It scared the hell out of us," manager Tony La Russa said.

Yes, the Cardinals may lose Pujols to free agency after the season. But they didn't want to lose him like this. They didn't want the last Pujols at-bat in a Cardinals uniform to occur June 19, not when there is a division race on the line. Hey, if this was the final at-bat, at least it was a Pujols home run, in the fifth inning.

But now it was the top of the sixth, and no one was thinking about the homer, about his contract, or what to throw on the backyard grill when they got home from the ballpark. No one could think, period.

And as Pujols went through his tortured contortions in foul ground near the first-base line, the red sea at Busch Stadium turned eerily still.

"The whole stadium was silent," Cardinals shortstop Ryan Theriot said. "This is one of the greatest players of all time."

The roar would return later when Skip Schumaker drilled a ninth-inning homer to give the Cardinals a 5-4 victory and a series win. But in this instance Schumaker's walk-off was overshadowed by an even more dramatic limp-off by Pujols.

But as it turns out, the Cardinals and Pujols probably dodged a metaphorical bullet that would have blown a hole through their season.

Pujols is pretty banged up; the wrist and shoulder are sore. But early reports are encouraging. There does not seem to be a break, a fracture. Yes, we've heard this before. The Cardinals specialize in offering premature, optimistic injury reports.

This situation is a little different, however. There doesn't seem to be much if any gray area. Either the wrist is broken or it is not. If it's broken, Pujols would be done for the year. If the wrist isn't broken, then the injury is a matter of severity.

If there's significant ligament damage in the wrist, the condition could sideline Pujols for a while. At least he would be back after a reasonable time. And there's a chance the Cardinals and Pujols could get really lucky and he'll avoid the disabled list.

We'll see. But late Sunday afternoon there wasn't a single person in this organization, in or around the Cardinals clubhouse, who thought Pujols has a broken wrist. The postgame mood was upbeat, and not just because of the win.

Another tip-off was this: Pujols was pleasant and patient in postgame interviews. If this was a catastrophic injury, chances are the organization immediately would have closed ranks and gone into the secretive, protective mode. Pujols wouldn't have appeared before his locker. But he did. That says a lot.

Mozeliak, no longer feeling sick, seemed calm and relieved an hour after the game. Isn't it about time for some reasonably good news on the medical front?

The Cardinals have been debilitated by injuries since spring training, when they lost ace starter Adam Wainwright to season-ending elbow surgery.

And yet the Cardinals (40-33) are tied with Milwaukee for first place in the NL Central. This much we know about the team's health: The players' hearts are stout, and in fine condition.

As Mozeliak said, "When Albert went down, it was like, 'What else could possibly go wrong?' The character of this club should never be questioned. There's really only so many shots a team can take and keep bouncing back. But this is a resilient group."

Pujols has reemerged as a force over the last three weeks, batting .343 with nine homers, six doubles, 17 RBIs, 21 runs and a combined on-base and slugging percentage of 1.253 since May 30.

Pujols has never played fewer than 148 games in a season since arriving in the majors and St. Louis in 2001. It's strange to think of him not being out there. But if the Cardinals are fortunate to lose Pujols for a few days, a week, or a 15-day stint on the DL, they should be able to handle it.

"We've been overcoming things like this all year," Schumaker said. "This has been a common theme to our season."

And there was instant reassurance when Lance Berkman replaced the injured Pujols in the sixth.

"But we have some capable players, even though no one can fill Albert's shoes. No one can do that. But we have some guys who can step up and play well. Hopefully it's all going to pay off in the end. If we're fortunate enough to make it to the playoffs, we'll be a stronger team. It will make us a stronger unit."

Pujols said he regretted not being able to playfully smack Schumaker around at home plate after the game-winning homer. After talking about his injury for a few minutes, Pujols politely suggested that we turn our attention to the game and the happy outcome.

"This was a big win," Pujols said.

Even better, it seems, because they seemingly avoided a substantial loss: Albert Pujols.

Worried about the wrist? Ask about it

Uh-oh: No Albert for weeks

When he writhed around in pain onSunday it didn't look good. Now Cardinal Nation knows just how bad it is.

The X Factor: Pujols will heal, per se. But will he be the same hitter, able to drive the ball?

Gordon: Now would be great time for Rasmus to deliver

Rasmus can't replace Pujols, but he could pull his head up and start carrying a load offensively

Jack McKeon is 80 years old. He is also expected to become the “new” manager of the Florida Marlins.

His daughter Grace suffers rare, life-threatening disorder; family cherishes each day with her

If baseball truly believes it must realign, there seem to be many more reasonable equations than one farcical proposal that would dump 15 team…

June 19, 2011 -- Cardinals' Albert Pujols yells out in pain after colliding with Kansas City's Wilson Betemit on a play at first base in the sixth inning during a game between the St. Louis Cardinals and the Kansas City Royals at Busch Stadium in St. Louis, Mo. Pujols was injured on the play and replaced in the field by Lance Berkman. Chris Lee clee@post-dispatch.com

June 19, 2011 -- Cardinals' Albert Pujols gestures to his left shoulder as he is tended to by head trainer Greg Hauck after being injured in a collision at first base in the sixth inning during a game between the St. Louis Cardinals and the Kansas City Royals at Busch Stadium in St. Louis, Mo. Chris Lee clee@post-dispatch.com