Bernie: Cards have edge with DeWitt as owner
0 comments
Share this
{{featured_button_text}}
1 of 2 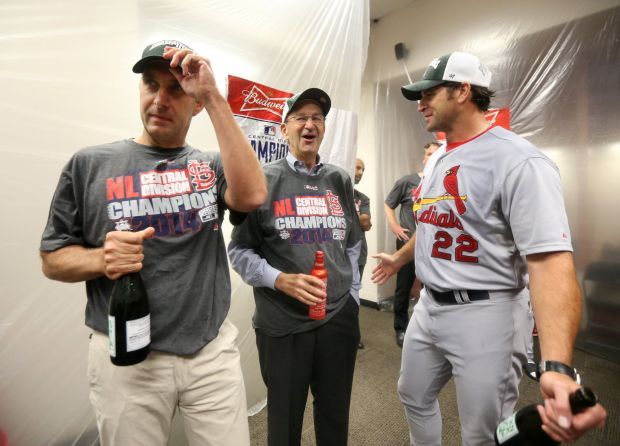 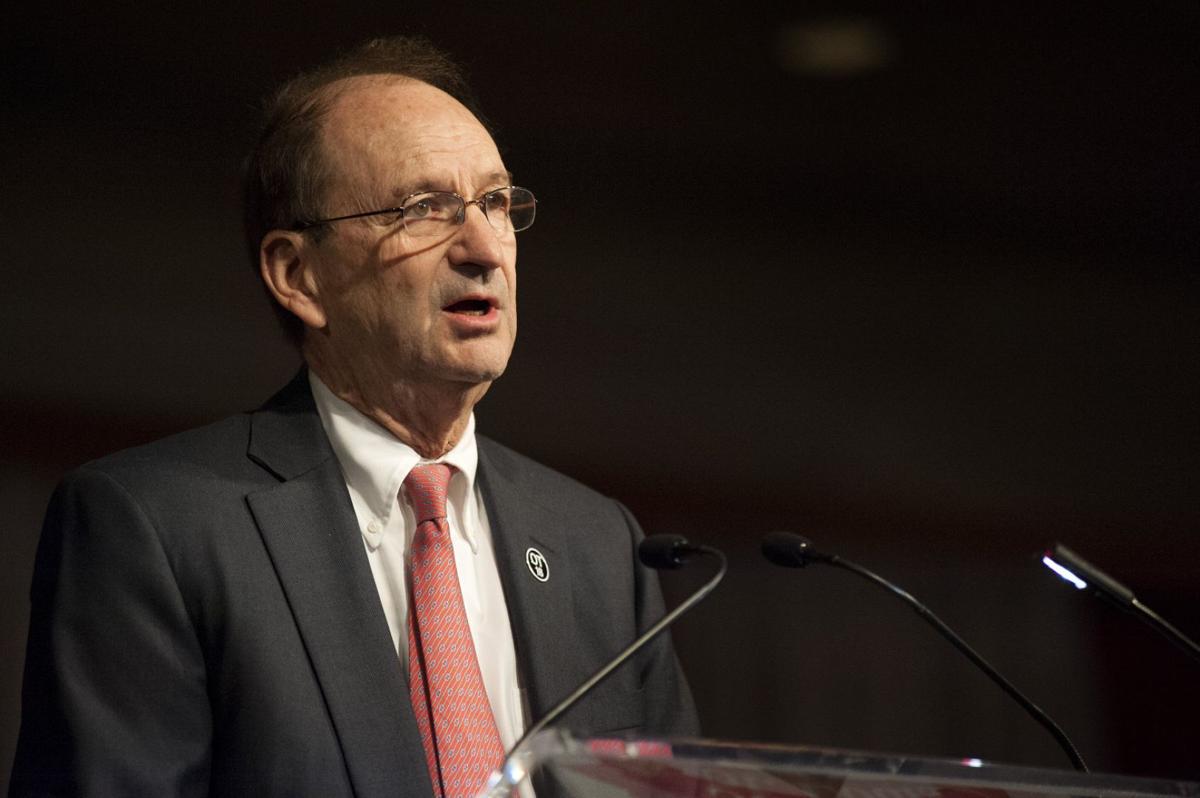 JUPITER, Fla. • The secret to the Cardinals’ sustained success starts at the top. And yes, it really is a secret, because no one really thinks of the owner as the creative mind that powers his team’s winning baseball operation.

Bill DeWitt Jr. is in his 20th season as the Cardinals’ owner and chairman.

Though DeWitt owns a baseball team, the truth is, the game of baseball owns him.

And that’s why we should view DeWitt as a baseball man, through and through.

“I do feel like I know my way around the game as well as anybody,” DeWitt said Tuesday at Roger Dean Stadium.

This isn’t bragging. It’s a statement on his life’s journey. DeWitt spent much of his childhood, teenage years, and young-adult phase tagging along with his father, William DeWitt.

The senior DeWitt was a general manager who built pennant-winning teams in each league, getting it done for the St. Louis Browns (1944) and Cincinnati Reds (1961). He also owned the Browns and Reds for a time, and worked in the front office for the New York Yankees and Detroit Tigers.

Given the family history, it’s special that the son, Bill Jr., grew up to guide the same Cardinals franchise to a level of prominence and achievement that measures up to the Rickey era.

Baseball isn’t just a business to DeWitt Jr. It’s his bloodline. When the Cardinals win, Bill Jr. thinks of his late father and how proud he would be.

“My father really had a wonderful career,” DeWitt said. “He started from nothing, was encouraged by Branch Rickey to get an education, and he did. He worked hard, and he worked his way up, and nobody ever gave him anything. He was a great baseball man and had a lot of success.

And that’s why I say DeWitt Jr. is a baseball man. He made a fortune away from the sport through investments made at his Cincinnati-based operation. But don’t underestimate DeWitt's knowledge of the game, his roots in the game, and the wealth of experience he brought to the Cardinals’ ownership chair.

When your organization has an owner who knows and lives the game, it provides a built-in advantage over the competition.

Which explains why, at least in part, that DeWitt’s Cardinals have won more postseason games (70) than any National League team since he purchased the franchise in 1996. It’s why the Cardinals have won two World Series and four NL pennants under DeWitt’s watch.

“I think my background helped me coming in as an owner,” DeWitt said. “Most owners are successful or they wouldn’t have the opportunity to own a major league baseball team. But they don’t have that baseball background.

"It takes them a while to get up to speed. They don’t know who to rely on. And I was just lucky to have that background. I was certainly no expert, but I had a feel for the game, and the way the operation runs.”

DeWitt’s influence extends beyond Busch Stadium. He led the committee responsible for installing Rob Manfred as the new baseball commissioner. And then Manfred appointed DeWitt as chairman of MLB’s executive council. The best way to describe it is this: If an owner has a problem, he goes to DeWitt for direction. If Manfred needs something done at the ownership level, he'll rely on DeWitt to round up support.

It’s a prestigious position, indicative of the respect and trust that DeWitt commands within the industry.

“I think Rob feels confident in that we run a stable franchise, and that I really care about the game and the best interest of the game," DeWitt said. "Everyone wants the best for their franchise for sure. And they do everything they can to enhance their franchise. But there is a broader picture of the game itself. And if the game is successful, the franchises will be successful.”

DeWitt also serves on the board of the Baseball Hall of Fame.

More than anything, DeWitt has revived a revered baseball franchise in St. Louis. Before he became owner in 1996, the Cardinals had slumped to a winning percentage of .489 over the previous eight seasons and hadn’t made it to the postseason since 1987.

Under DeWitt, the Cards have competed in the playoffs 12 times in 19 seasons, advancing as far as the NLCS on 10 occasions.

“Our expectations were to be able to continue to build the Cardinal franchise,” DeWitt said. “We’ve had a lot of success and good fortune, and I don’t think we could have anticipated the extent to which it’s worked out. Because it’s really, really been great.”

DeWitt’s enlightened, forward-thinking approach is a significant factor in the Cardinals’ consistent winning. DeWitt, 73, was ahead of the baseball-ownership curve in embracing advanced metrics as an evaluation tool, hiring Jeff Luhnow in 2003 to install new methodology for scouting, analyzing and projecting the likely success of potential draft picks.

The Cards’ drafted, home-raised talent was paramount in the current run of four consecutive appearances in the NL championship series.

During the season, DeWitt begins his day by going to his laptop to review the daily reports filed by every manager in the organization's farm system. He wants to keep tabs on the prospects.

“To get a sense of where we’re headed," DeWitt said. "What do we need. What’s coming, realistically. Not the pie-in-the-sky stuff."

"I can't get enough of baseball," DeWitt said. "My wife Kathy would tell you that I get too much baseball. But you never stop learning. We’re always thinking of new ways to improve.

"Not just the club today, but what are we going to do in a few years. I live and die with the games each day. They’re gut-wrenching. But I do look three years, five years out to gauge the future."

DeWitt’s curiosity with baseball stats began in the mid-1960s as he assisted his father in the Reds’ baseball operation.

“We were always looking for ways to get ahead of the industry,” DeWitt said. “We didn’t have access to all of the numbers and the video that we have now. We used to internally run numbers on what players did in certain circumstances. Other clubs didn’t do that. It always intrigued me."

DeWitt would also talk to scouts and others in the organization about finding ways to develop a model, a system, for projecting what the Reds could expect from their minor leaguers. This was during the time, nearly a half-century ago, when DeWitt Sr. was building the farm system that would produce the players for the legendary "Big Red Machine" Reds teams.

It took a few years of restlessness, but coming up with new ways of assessing talent was a priority for DeWitt in St. Louis. And he implemented the plan by going outside of baseball to hire Luhnow. But the Cardinals were using advanced metrics before that, with DeWitt commissioning data from independent analysts.

“As time went on this became something we had to change," DeWitt said. "There was so much information out there. The use of metrics kept proliferating, and we weren’t doing anything to take advantage of it to evaluate what a player’s true performance was — and what that meant in terms of their value.

“That’s what really drove me to embrace this. I’ve always been in the draft room, and I don’t think most owners do that. I get a sense of what they’re saying when they talk about players. I know our model for player evaluation has evolved over the years, and it’s very good. And I feel good about that.”

But DeWitt also has genuine respect for scouts — an admiration formed during those long car rides on long-ago scouting trips with his father.

This explains why DeWitt and GM John Mozeliak have set up such an astute organization. The Cardinals take the best from both baseball worlds, old and new.

As ESPN.com recently wrote: “The Cardinals were cited often by our sources as being especially adept at blending data and traditional sources of baseball info. One industry insider told ESPN.com, ‘Everyone in the Cardinals’ organization is analytical,’ and another marveled at their proactive use of analytics in player development.”

And that begins at the top, with Bill DeWitt Jr.

Cardinals gather as a group for the first time this season and try to come to grips with the death of Oscar Taveras.

Bernie: Taveras' death could have lasting effect on lineup

Cardinals can’t ignore losing Taveras’ bat. Until the time of his death, club was planning its future lineup around him.

Thirteen available pitchers who didn't face hitters Wednesday will do so today, including young starter Martinez, Lynn and Rosenthal.

Bernie: Cards get money's worth with Holliday

Club has no buyer’s remorse after giving Matt Holliday the largest contract in franchise history. He personifies the ideal Cardinals player.

Wainwright: 'Now is not the time to push'

Cardinals ace sent to St. Louis to meet with specialist about pain in his lower abdomen. Wainwright said MRI scan in Florida showed 'it's not a hernia.'

One part is that transportation will be available for anyone who had too much to drink, GM Mozeliak says.