Bernie: 'Same old Rams' would have lost
0 comments
Share this
{{featured_button_text}}
1 of 2 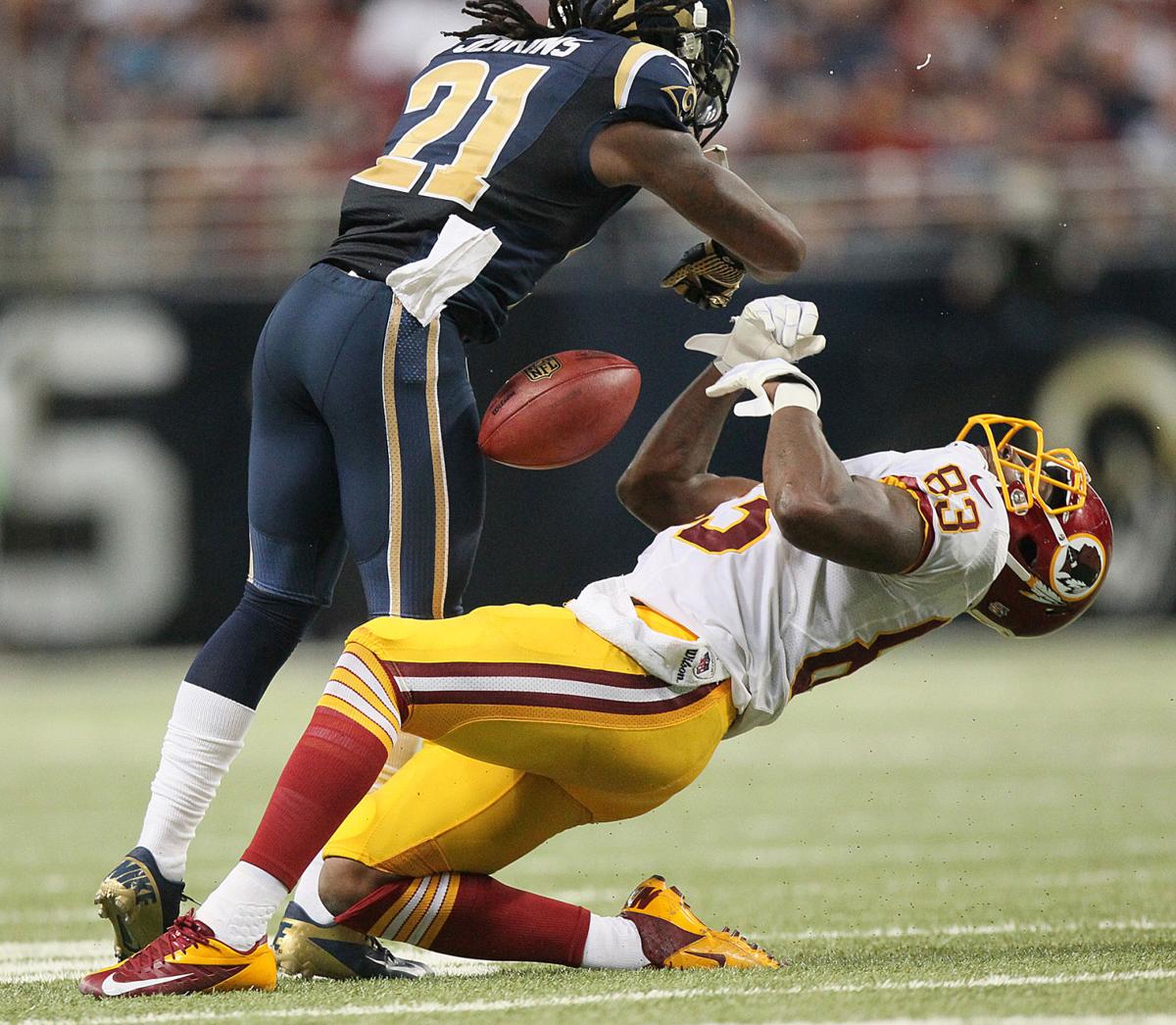 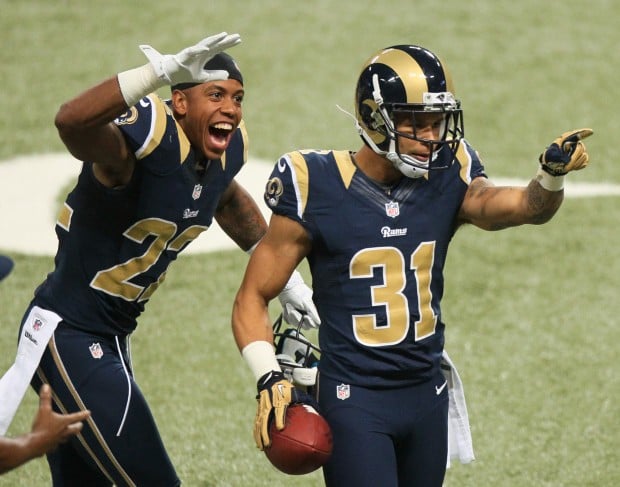 In their first home game of the new season, the Rams encountered the hottest star and newest celebrity in the National Football League. Considering how this Sunday spectacular began, the home team was in grave danger of being caught in the vortex of Robert Griffin III’s whirling, incandescent talent.

The Rams fell behind 21-6, and RG III was having his own personal Olympics with the Rams defense as he sprinted, leaped, dived and tossed javelins.

They would shush the loudmouths and enlighten the simple minds who foolishly called them the "same old Rams" despite the dramatically improved play in a close loss at Detroit in the season opener.

These Rams would turn off Griffin’s spotlight and leave the Redskins wandering through the dark in the fourth quarter.

These Rams would see Sam Bradford, their unfairly maligned quarterback, summon his pride and defiance to take the victory from RGIII.

These Rams would cast aside the expectations, remake their image and bring the Dome and the franchise to life by upsetting the Washington Redskins 31-28.

Amendola was one of many who personified the Rams’ new spirit under head coach Jeff Fisher. On the first play from scrimmage, Amendola lost a fumble that the Redskins scooped for an easy 7-0 lead.

Rather than slink away in embarrassment, Amendola would become a principal factor in the comeback, finishing the day with an amazing haul of 15 catches, 160 yards and a touchdown.

When it was Griffin’s time to shake-and-bake the Rams, with St. Louis serving as a quick rest stop on RGIII’s journey to the Pro Football Hall of Fame in Canton, the other quarterback wasn’t going to stand by and watch.

Yeah, Griffin did it all. He juked to a 5-yard touchdown run for a 14-3 lead. He dramatically raised his right arm, as if to announce his greatness, and a lightning bolt streaked from his fingertips and into the palms of wide receiver Leonard Hankerson for a 68-yard touchdown. The Redskins were up 21-6.

But Bradford and the petulant Rams stubbornly insisted on making this a game, and the Redskins were probably surprised to be losing 23-21 in the third quarter. No problem; RGIII settled the mini-crisis by cantering into the end zone with his second TD run of the day. The Redskins snatched that lead right back, 28-23.

Bradford’s response: his third TD pass of the game, this a perfect-strike fastball to tight end Matt Mulligan. Bradford finished with 310 yards and increased respect.

After two games Bradford has completed 72 percent of his passes for 508 yards, four touchdowns and one interception, and his passer rating shines at 112.4. The QB’s positive start will at least temporarily mute the primal screams coming from the bizarre anti-Bradford loons.

With Bradford connecting for big completions, matching Griffin, surpassing Griffin, and giving the Rams a late lead to protect, this game had a carryover Detroit vibe.

The Rams’ defense would be asked, again, to make a play, make a stop, make the threat of losing go away. In Detroit, the Rams’ defense crumpled in the final minute, with the Lions scoring the winning and stunning TD with 10 seconds remaining.

This time, the Rams’ defense saved the win by subduing Griffin in the late stages. After the Redskins went ahead by 28-23, this is how Washington’s final five possessions ended: blocked punt, a second punt, a third punt, a fourth punt and a desperate 62-yard field goal attempt that fell way short.

Sunday the St. Louis defense had closers and finishers. Not all was lost in Detroit; the Rams obviously tapped into the frustration to strengthen their resolve.

"Same scenario, but we were able to come out on top this time," cornerback Cortland Finnegan said. "We kept saying that in the huddle. This is our chance to stand up and make a play when we need it."

The Rams won with rookie running back Daryl Richardson capably filling in for the injured Steven Jackson in the second half. They won even though Richardson made a huge mistake with a late fumble. They won despite the horrendously incompetent officiating.

The Rams won even though offensive tackle Rodger Saffold departed with a knee injury. They won the psychological warfare with the Redskins, who tried to intimidate them. Not anymore.

The Redskins’ comeback try took a major hit when the perpetually aggravating Finnegan turned on his motor mouth to bait Washington wide receiver Josh Morgan into throwing the football at him. The ensuing 15-yard penalty essentially killed Washington’s last-chance drive.

If you saw Fisher’s Tennessee teams play, this is all very familiar. "He exudes confidence, which falls on everyone else," Jackson said.

Confidence. Physical and mental toughness. A willingness to fight through anything that threatens to pull them down, into that bottomless pit of losing.

"It’s just amazing," Jackson said. "I know it’s only week two, and we’re 1-1, but it’s just a whole different atmosphere. I can’t thank Coach Fisher enough for what he’s done, and what he’s doing with us."

Actually the Rams did thank Fisher. You could see it on the scoreboard: Rams 31, Redskins 28. That score carried a message. They’re not the same old Rams. They are Jeff Fisher’s Rams.

Now, in the cavalcade of catches that is Matthew Mulligan, NFL tight end, it's hard to say where his game-winning 1-yard touchdown grab agains…

Wins all around for Rams, Redbirds and Mizzou

Jeff Gordon takes your questions about the Rams win, the Cardinals' keeping their wild-card lead, Mizzou's squeaker, the NHL lockout and more.…

Steven Jackson situation: Was it an injury, or a benching by Jeff Fisher?

Griffin may be a promising talent, but Bradford reminds everyone he’s pretty good, too.

Here are the grades for the St. Louis Rams after their 31-28 victory over the Washington Redskins.