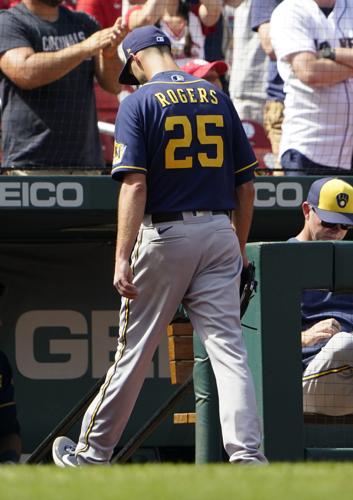 Brewers relief pitcher Taylor Rogers walks off the field after being removed from the game during the eighth inning against the Cardinals on Sunday, Aug. 14, 2022, in St. Louis. 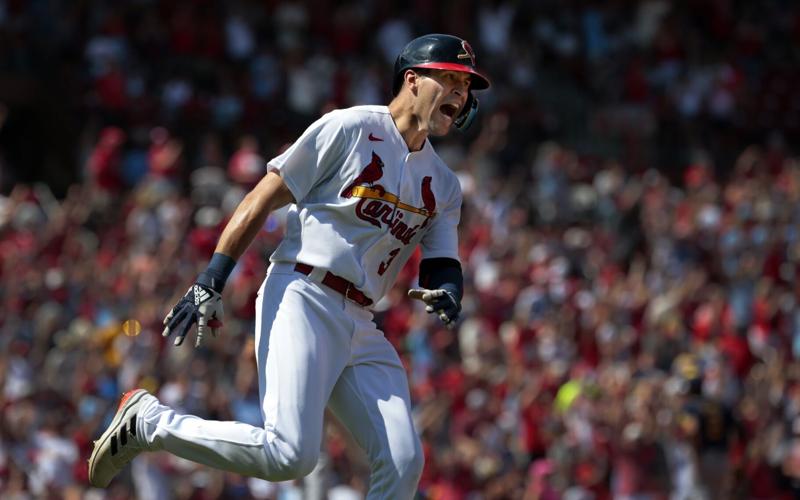 The Cardinals’ Dylan Carlson celebrates hitting an eighth-inning solo home run against the Brewers on Sunday, Aug. 14, 2022, at Busch Stadium. The Cardinals won the game 6-3.

In a 2-2 game, Counsell called on left-handed reliever Taylor Rogers in the eighth inning. Stearns had acquired Rogers as the key piece in his head-scratching trade that sent long-dominant closer Josh Hader to the San Diego Padres and weakened the Brewers.

The Cardinals improved at the trade deadline by adding starting pitchers Jose Quintana and Jordan Montgomery. Besides adding Hader, the Padres muscled up on offense while acquiring Juan Soto and Josh Bell from the Washington Nationals.

Meanwhile, the Brewers took a step back. The Hader trade hit them like a gut punch. They’d lost nine of their previous 13 games through Monday, and their four-game lead over the Cardinals in the National League Central turned into a two-game deficit.

While Hader has suffered a handful of bad outings this season, he still brings an intimidating presence to the mound. The Brewers, including reliever Devin Williams, fed off of that presence. Opponents feared it.

When he is at his best, Hader gives his team a massive edge at the end of games — and now his team is the Padres.

Why would the Brewers do this? Hader was going to cash in big time next season with his final year of arbitration, then collect crazier money with free agency for 2024 and beyond. Perhaps he was showing signs of wear and tear.

Stearns figured he could add multiple relievers to replace Hader, gain some future assets (prospects Robert Gasser and Esteury Ruiz) and leave more payroll space for other needs next season and beyond.

Rogers has been scuffling. In his last three Padres outings, he allowed four runs on seven hits while retiring just eight batters. He failed to hold the lead in his second game for the Brewers, in a 4-2 loss to Cincinnati.

In his one inning Saturday, Rogers allowed Yadier Molina’s leadoff single before Tommy Edman popped out and Albert Pujols and Tyler O’Neill struck out.

That set the stage for Sunday’s decision. Counsell deployed Rogers with Lars Nootbaar, Dylan Carlson and O’Neill due up, backed by Paul Goldschmidt, Nolan Arenado and Pujols.

Rogers versus the left-handed hitting Nootbaar was a logical matchup, and sure enough, Lars struck out.

Next up was Dylan Carlson, a switch-hitter who is far more dangerous from the right side of the plate — .310 through Sunday’s game, with an on-base plus slugging percentage of .893. Carlson ripped the go-ahead solo homer.

Next up was O’Neill, who also hits much better against left-handers (.283, .784 OPS) than right-handers. He reached on an infield single and took second on a throwing error.

At this point Rogers reached his three-batter minimum, so Counsell was free to remove him. But he didn’t.

Rogers walked Goldschmidt and struck out Arenado. Cardinals manager Oliver Marmol was ready to pinch-hit Nolan Gorman for Pujols if Counsell summoned a right-hander. He didn’t.

Uh, oh! Pujols crushed a three-run homer to ice the game. Earlier, he launched a long homer off left-handed starter Aaron Ashby, so it’s not like you couldn’t see this coming.

“He’s a guy that, especially against lefties, if he’s going to get a pitch to hit, he’s going to be ready to hit it,” Brewers outfielder Andrew McCutchen told MLB.com after the game. “He got his pitches today, out over the plate, and he did damage. That’s what he’s done his whole career.”

Pujols got a read on Rogers the day before during his eight-pitch at bat. He was ready to attack if Rogers missed his location.

“He just made some mistakes,” Counsell said. “And you know, some good hitters put good swings on some mistakes.”

The Brewers still have time to restore order in their bullpen. Matt Bush, another reliever Stearns acquired before the deadline, has pitched well since arriving from the Texas Rangers. Yesteryear Cardinals closer Trevor Rosenthal, another addition before the trade deadline, hopes to work his way off the injured list and help during the final weeks.

On the other hand, the Brewers put Dinelson Lamet, the fourth piece of the Hader return, on waivers shortly after acquiring him. Apparently they just had too many other pitchers. That Lamet threw five scoreless innings in his first three appearances for the Rockies did not make Milwaukee fans feel better about the Hader trade.{indextab} {indextab}

The Brewers also failed to upgrade their offense before the trade deadline, so now they must play catch-up to the Cardinals after leading the division most of the season.

“We are really good at playing late in the season,” Brewers pitcher Freddy Peralta told reporters Monday. “I think that we’re just having a little bit of a hard moment right now, but I know that the team is going to come back and win games again.”

That would be easier if Hader still was closing games for them.

Cardinals’ recurring carousel of center fielders turns to Dylan Carlson. Can he stick?

Gordo: When will prosperous Cubs get serious about winning again?

The Small Bears spent five years of deliberate failure to build a powerful club that won a World Series and reached postseason play five times in six years. But the bar is higher for the Cubs now.

Two walks, a bunt hit and a hit batsman enabled the Cardinals to beat the Rockies for 33rd time in past 39 meetings at Busch.

Brewers relief pitcher Taylor Rogers walks off the field after being removed from the game during the eighth inning against the Cardinals on Sunday, Aug. 14, 2022, in St. Louis.

The Cardinals’ Dylan Carlson celebrates hitting an eighth-inning solo home run against the Brewers on Sunday, Aug. 14, 2022, at Busch Stadium. The Cardinals won the game 6-3.