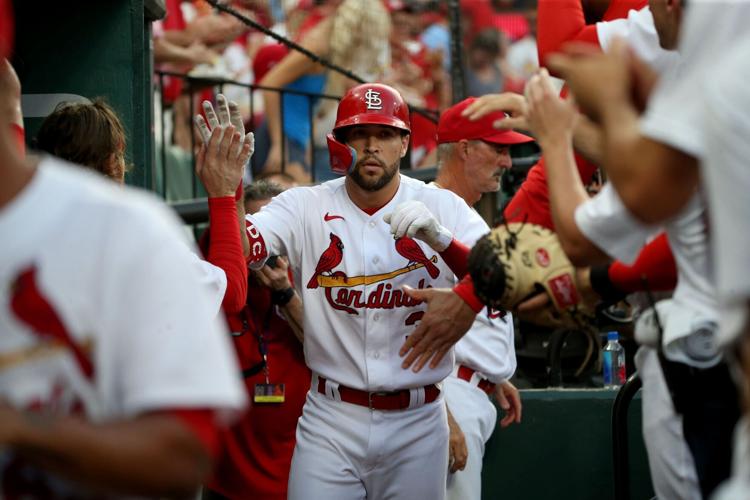 Teammates congratulate Cardinals outfielder Dylan Carlson (3) on his solo home run in the second inning of a game against the Pirates on Wednesday, June 15, 2022, at Busch Stadium in St. Louis. 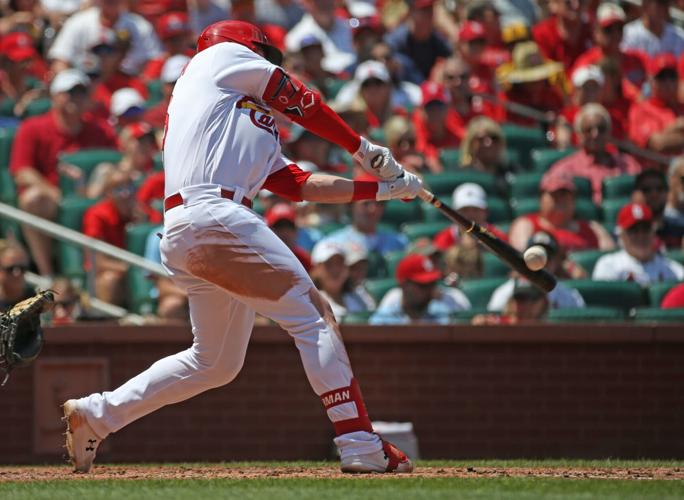 The Cardinals' Nolan Gorman connects for a two-run home run in the third inning of a game against the Padres on May 30, 2022, at Busch Stadium in St. Louis. 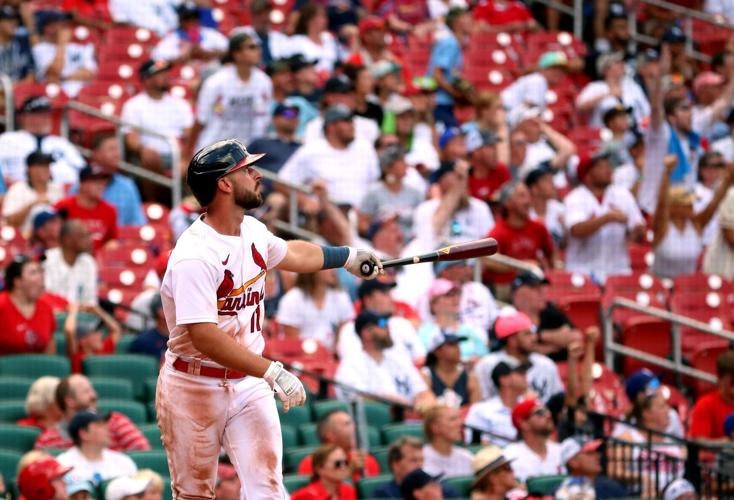 Cardinals shortstop Paul DeJong (11) hits a three-run home off Yankees relief pitcher Scott Effross in the eighth inning of a game on Sunday, Aug. 7, 2022, at Busch Stadium in St. Louis.

What the Cardinals did not do at baseball’s trade deadline was most impressive.

They did not overpay for near-term help. They did not trade away their best young hitters or young pitchers. They did not abandon the operating philosophy that has served them so well.

They did not subtract a key asset to contain their 2023 payroll, as the Milwaukee Brewers did while mindlessly trading away closer Josh Hader.

While rival franchises lurched into “win now” mode, the Cardinals stuck with their “win now, win later” approach which has kept them in the chase through most of this century.

While other teams measured their competitive windows while making their trade calculations, the Cardinals reminded the industry that they don’t do windows. They just keep succeeding.

President of baseball operations John Mozeliak demonstrated his trademark restraint, a professional trait that frustrates many fans. That circumspect approach set up the Cardinals for future success while still giving manager Oliver Marmol more talent to deploy this summer.

Much will be written about the positive impact of newly acquired starting pitchers Jose Quintana and Jordan Montgomery. Bullpen newcomer Chris Stratton should help, too, if he can regain control of his breaking pitches and put his experience to work.

But what about the players who survived the trade deadline?

Dylan Carlson replaced the injured Harrison Bader in center field and handled the greater defensive responsibilities with aplomb. That success allowed Mozeliak to trade Bader to the Yankees for Montgomery right before the deadline.

The Cardinals didn’t give up on shortstop Paul DeJong this season, as many of us did. He spent 2½ months in the minors clearing his head and resetting his hitting approach.

Seventeen Triple-A homers later, DeJong is giving the Cardinals an offensive lift while improving the team’s infield defense, too, with Tommy Edman often sliding back to second base.

They stuck with young outfielder Lars Nootbaar, whose fielding prowess kept him ahead of power-hitting outfield prospect Alec Burleson. Sure enough, Nootbaar relocated his swing during the All-Star break and has become a solid second-half offensive contributor.

When Yepez returns from his forearm injury, Marmol will be fully equipped to play the matchup game. He will finally have the offensive depth and positional versatility to adjust his lineup from game to game and inning to inning.

Edman can play all over the field. So can rookie Brendan Donovan. Edman and Carlson are switch-hitters. Marmol will be able to mix and match around his offensive cornerstones Paul Goldschmidt and Nolan Arenado.

On the pitching side, Zack Thompson (2.45 ERA), Jake Woodford (3.05 ERA) and Junior Fernandez (2.93 ERA) have all had success as Cardinal fill-ins this season. All three survived the trade deadline, along with prospect Matthew Liberatore, and they remain all on call at Memphis.

The Cardinals currently employ relievers who Marmol refuses to use in high-leverage spots unless he absolutely, positively has no choice. They must address that weakness — and they have multiple options to do so now and again on Sept. 1, when teams can expand their pitching staff to 14.

Our suggestion: Woodford, who has allowed just one run in 12 innings in his last two starts at Memphis. He is way overdue for another look in the majors.

Looking past this season, this team can see the potential to build something special.

Pitching depth is paramount, and the Cardinals are rebuilding their arms supply. Liberatore just enjoyed a 10-strikeout game at Memphis to remind us of his untapped potential.

Fast-developing pitching prospects Gordon Graceffo and Michael McGreevy finally hit some speed bumps at the Double-A level, but they remain are pace to fill in two blanks on the Memphis staff next season.

As ESPN analyst Kirby McDaniel noted while assessing the Cardinals, “Their draft this year was headlined by three effective college lefties who are all likely big leaguers: Cooper Hjerpe, Brycen Mautz and Pete Hansen.”

Then there are the highest-ceiling prospects: Jordan Walker, making the transition from third base to the outfield at Springfield; speedy Double-A teammate Masyn Winn at shortstop; and pitcher Tink Hence, down Class A at Palm Beach.

The Cardinals made enough upgrades from inside and outside the organization to give this Reunion Tour squad a fighting chance to play on in October.

Yet the Cardinals also stayed on track to do even bigger things once the franchise moves past the nostalgic celebration of this season.

As they bid farewell to destined Hall of Famers Albert Pujols and Yadier Molina, they can look forward to seeing which of their young talents will star next.

Hochman: Cardinals made the right move by not trading for Juan Soto

A perennial MVP contender during his peak years in Colorado, Arenado says that's "Goldy's award." But their surge as a duo began by solving home field.

Gordo: When will prosperous Cubs get serious about winning again?

The Small Bears spent five years of deliberate failure to build a powerful club that won a World Series and reached postseason play five times in six years. But the bar is higher for the Cubs now.

Teammates congratulate Cardinals outfielder Dylan Carlson (3) on his solo home run in the second inning of a game against the Pirates on Wednesday, June 15, 2022, at Busch Stadium in St. Louis.

The Cardinals' Nolan Gorman connects for a two-run home run in the third inning of a game against the Padres on May 30, 2022, at Busch Stadium in St. Louis.

Cardinals shortstop Paul DeJong (11) hits a three-run home off Yankees relief pitcher Scott Effross in the eighth inning of a game on Sunday, Aug. 7, 2022, at Busch Stadium in St. Louis.