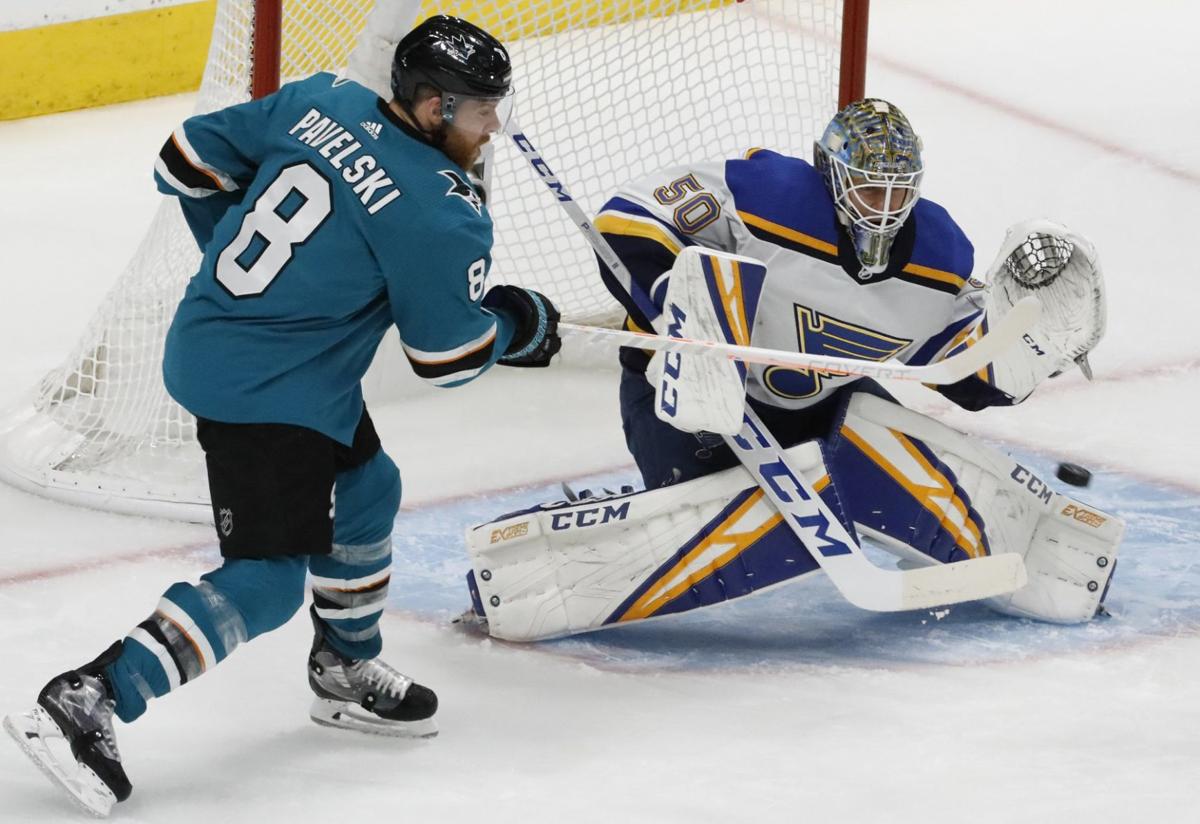 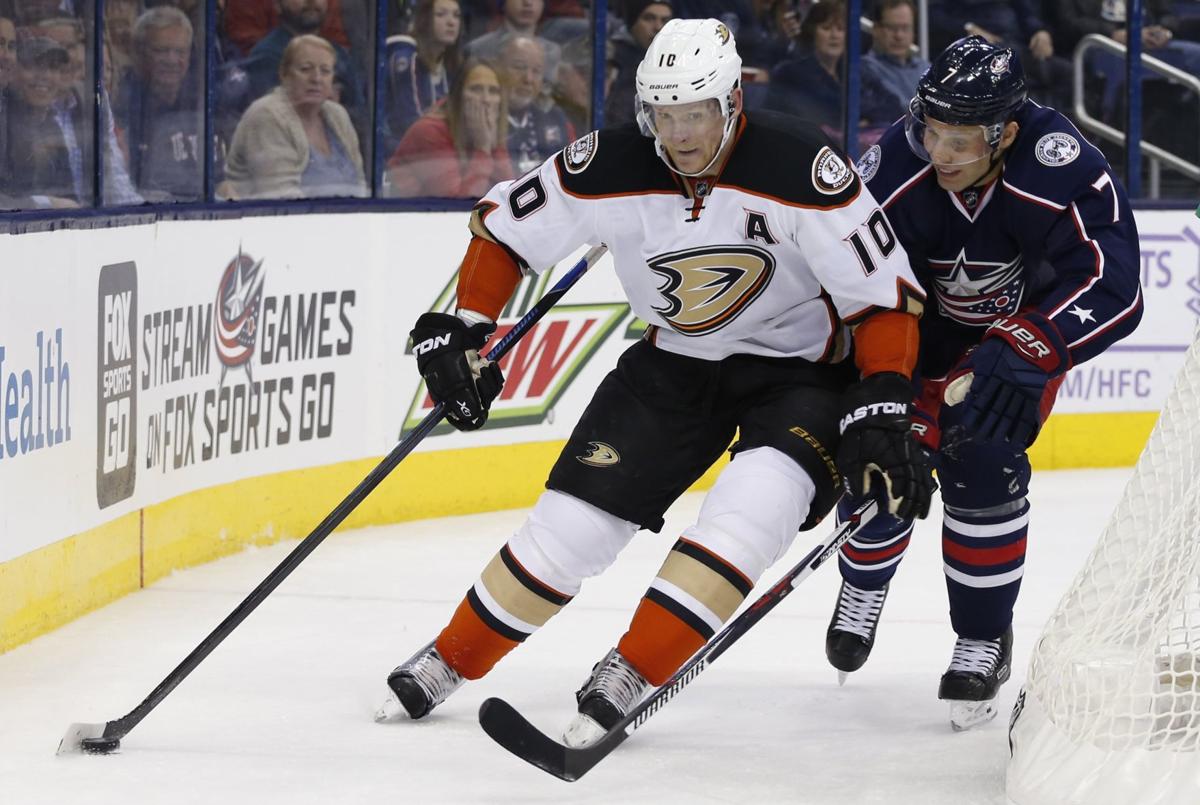 Anaheim's Corey Perry, left, carries the puck behind the net as Columbus' Jack Johnson follows him in a game on Nov. 9, 2016, in Columbus, Ohio. (AP Photo/Jay LaPrete)

Make no mistake about it: The Dallas Stars are coming after the Blues.

They almost got them during the second round of the NHL playoffs. Game 7 went into double overtime and several times the Stars came thisclose to scoring the series-winning goal.

Now they have reloaded to reaffirm they are in “win now” mode. During an offseason that has seen several Western Conference teams improve, the Stars emerged as the primary threat to the defending Stanley Cup champions.

Stars general manager Jim Nill added more firepower, but he was more pleased with his ability to secure more fortitude.

“These guys are very competitive players,” Nill told reporters Monday. “These guys have won at every level they’ve been. They’re marquee players. . . . there’s a pedigree that comes with that.

“You can never be competitive enough. We saw that in the playoffs. St. Louis showed everybody that’s how you have to play. We were right there with St. Louis.”

Pavelski could appreciate that, because his Sharks lost to the Blues going away in the Western Conference Final. He believes the Stars have enough talent and experience to produce a better result next spring.

“They are coming off a good year,” Pavelski said during a call with reporters. “They felt they had a chance to beat St. Louis and came up a little bit short. (The Stars) add a lot, too, and hopefully we can take another step next year.”

At 35, Pavelski isn’t likely to score 38 goals as he did last season for San Jose. But he will win faceoffs, bolster the Dallas power play and convert his share of deflections around the net.

Back in the day (last month) Perry, 34, enjoyed a 50-goal campaign. He is more likely to score 15 to 20 goals at this stage of his career, but he will help the Stars play a heavier game. Perry earned those 1,060 career penalty minutes the hard way by battling in front of the net and along the walls.

“Corey Perry has been a world-class player,” Nill said. “He’s won Olympics, he’s won Stanley Cups, he’s been MVP of the league, he’s won scoring races. Those guys just don’t go away. He’s still got the fire in him.”

Like Perry, Sekera, 33, has struggled with injuries the last few seasons. But he adds skill and experience to a defensive corps that lacked depth last season after suffering multiple casualties.

The Stars have some good young players, led by Miro Heiskanen, but they are going for the Cup while they still have veterans Tyler Seguin, Jamie Benn, Alexander Radulov and Ben Bishop performing at a high level.

“Happy 50th birthday to me,” Stars coach Jim Montgomery quipped Monday. “Unreal job by Jim Nill and everybody associated that helps him because you look at the type of people we’re adding, leadership qualities, veteran presence and obviously people that know how to score goals, go to tough areas, hopefully draw more penalties next year. Lot of positives.”

So the Blues will face a heck of a playoff race next season. The Nashville Predators made a key adjustment, effectively trading defenseman P.K. Subban for skilled center Matt Duchene.

Similarly, Colorado sacrificed some blue-line depth to bolster its dreadful second line. The Tyson Barrie-for-Nazem Kadri trade was a win for both the Avalanche and Maple Leafs. The promise of young Avalanche defensemen Cale Makar and Sam Girard made trading Barrie for Kadri, a gritty No. 2 center, possible.

While the Blues focused on just keeping most of their team intact, the NHL marketplace was buzzing for teams with flexibility.

“A lot of it’s a function of the cap system,” Nill observed. “A lot of those players became available because of that. We’re fortunate to be in a good position I think where our team is trending, everybody saw, the league saw where we were in the playoffs, where we’re heading. Some of the young players, the growth in their game. Because of that, the combination of all of these things, here we sit today.”

At the very least, the Cards converted some of their outfield surplus into more good young pitching. But maybe something larger is afoot here.

At the very least, the Cards converted some of their outfield surplus into more good young pitching. But maybe something larger is afoot here.

Gordo on the NHL: Devils shift Brodeur to hockey side; Tkachuk pounded for his antics vs. Oilers

Rental car pitchman Martin Brodeur doesn't necessarily want to become the next Lou Lamoriello, but he's been drafted to help the hockey operation.

Baseball commissioner Rob Manfred wants to put an end to the surveillance-based cheating, so he backed his strong words with strong action.

Anaheim's Corey Perry, left, carries the puck behind the net as Columbus' Jack Johnson follows him in a game on Nov. 9, 2016, in Columbus, Ohio. (AP Photo/Jay LaPrete)