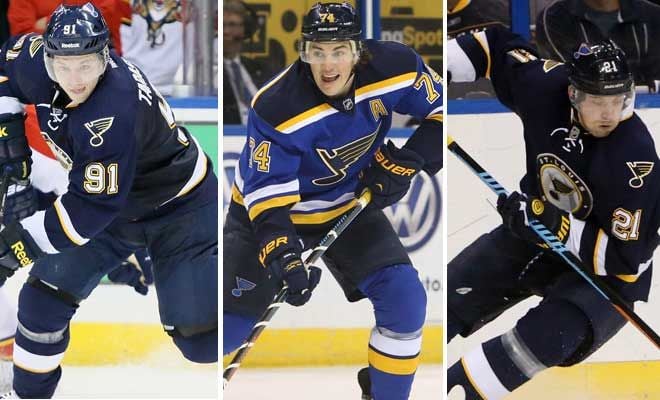 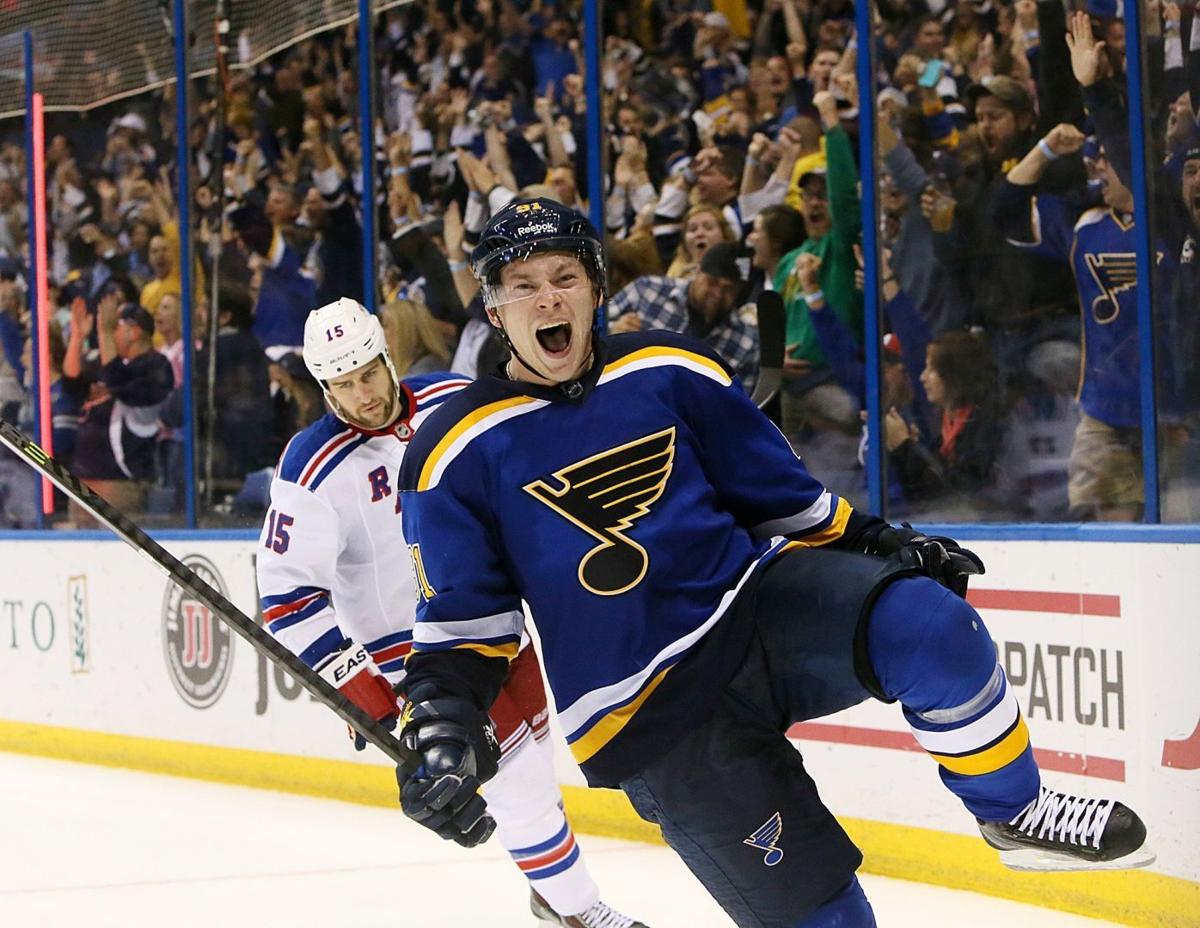 St. Louis Blues right wing Vladimir Tarasenko reacts after tying the game with his third period goal during a game between the St. Louis Blues and the New York Rangers on Thursday, Oct. 9, 2014, at the Scottrade Center in St. Louis. Photo by Chris Lee, clee@post-dispatch.com

The deal came on the heels of his lucrative second NHL contract — a five-year, $25.5 million deal he signed with the Ducks.

Ryan is a four-time 30-goal scorer in the league, so he offers a hint at the long-range earning power Blues winger Vladimir Tarasenko has going forward. But . . .

Is that crazy talk? Hardly. Tarasenko is a precious asset. If he hit restricted free agency, somebody would put a maximum offer sheet out there.

The Blues have more than $56 million committed to 15 players next season. Goaltender Jake Allen will be due a nice raise on his second deal, assuming he steadies himself this season, so that will push the number closer to $58 million for 16 players.

The NHL salary cap could go up next year, but it is unlike to shoot up $6 million. And even if it did, the Blues are already deficit spending on talent.

Hence all the trade speculation surrounding forwards T.J. Oshie ($4.175 million cap hit through 2017) and Patrik Berglund ($3.7 million cap through '17). Something will have to give by the summer.

Oshie and Berglund are good guys who add value to the group, but their current value ranks down in the middle of this pack.

Fans suggest the team could move one of its Big Three defensemen, but that is the strength of the team. Alex Pietrangelo ($6.5 million cap hit), Jay Bouwmeester ($5.4 million) and Kevin Shattenkirk ($4.25 million) offer a solid foundation to build on.

Defenseman Barret Jackman and his $3.167 million cap number could come off the books, but this has been the only team he has ever known. Will he have to finish his career elsewhere?

Defenseman Ian Cole becomes a restricted free agent. Either he will cost more or the veteran who lands in his spot will cost more.

Dmitrij Jaskin, Robby Fabri and Petteri Lindbohm could fill roles next season on entry-level deals and Ty Rattie and Ivan Barbashev could eventually factor in as well. The Blues have talent ready to cycle in.

(Fabbri, by the way, has seen time on the power-play point for Team Canada in its World Juniors preparations.)

So the process of elimination comes back to Oshie and Berglund. Fans have been busy constructing wishful trade proposals to land Bruins power forward Milan Lucic or wingers Taylor Hall or Jordan Eberle out of Edmonton, but any big Blues deal needs to clear long-term payroll flexibility.

Armstrong has tried to quell the trade scuttlebutt, telling the Post-Dispatch that he is not actively in the trade mart, but everybody understands the Tarasenko scenario.

So this team will continue to be the subject of speculation through the end of the season into the summer.

AROUND THE RINKS: Loui Eriksson is excellent two-way forward. He is picking up his offensive pace this season after recovering from his injury-marred 2013-14 campaign. But his contract, which runs through next season, carries a $4.25 million cap hit and the Bruins have a lot of players to re-sign — including budding defensive star Dougie Hamilton. So the Bruins are in contact with various teams with salary cap space and the need for some offensive help . . . The Blues aren't the only Western Conference team needing to do some clean-up after the holidays. The Kings continue to suffer uncharacteristic breakdowns . . . Also, the Wild hit the skids before the holiday break, losing four consecutive games.

Get all the sports coverage from Jeff Gordon without the popups and surveys. Check out our holiday offer: 99 cents for 3 months.

Armstrong won't be playing it safe

To win a Stanley Cup, Blues GM Doug Armstrong knows you have to take chances — and be prepared for them not to work.

Blues come up empty in Colorado

'We’ll see if this is a wake-up call for us,' Hitchcock says after 5-0 debacle completes an 0-2-1 trip for the Blues.

Blues Talk: Sound off about the Minnesota series

Blues forward has dealt with mother's struggle with alcohol, father's Alzheimer's disease and recent deaths of two loved ones.

St. Louis Blues right wing Vladimir Tarasenko reacts after tying the game with his third period goal during a game between the St. Louis Blues and the New York Rangers on Thursday, Oct. 9, 2014, at the Scottrade Center in St. Louis. Photo by Chris Lee, clee@post-dispatch.com