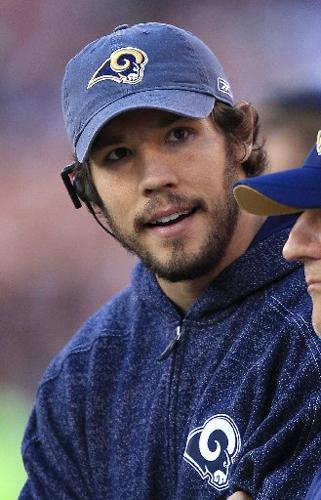 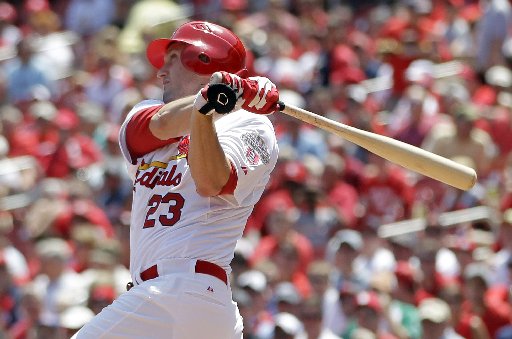 His World Series heroics may have catapulted David Freese to the city's most recognizable sports figure. (AP Photo).

The Rams are invested heavily in Sam Bradford being that brand-name, big-ticket star for their franchise and city. There are many ways for the narrative to go – to the playoffs, to another city, to sustained mediocrity. Look, St. Louis is a baseball town, and there are several Cardinals – chiefly Yadier Molina and also Adam Wainwright, Matt Holliday – who are positioned to be the “face” of that franchise and could take Pujols’ abandoned crown in the coming years. But right now, today, the timing is set for Bradford. So much is going on with the Rams (staying? going? building? rebuilding? winning?) that they need a tent-pole personality. Bradford is their best bet.

With Pujols gone, St. Louis doesn’t have a legitimate face of the city’s sports scene, but the athlete who perhaps represents our town the most right now is the Cardinals’ David Freese. His heroics in the playoffs last year catapulted him straight to the top. I remember being in Calgary with the Blues and players were jumping up and down in their hotel rooms watching Freese deliver in the clutch. Obviously, Freese will have to continue to produce consistently for several years to even draw close to Pujols’ previous stature in St. Louis, but he has already created memories that won’t ever be forgotten, memories that have him front and center for now.

That might be the best question ever asked in this space. In reality, St. Louis is without a sports “face” right now.

The Cardinals have nationally known players, like Matt Holliday, Adam Wainright, David Freese ... but to suggest any of them command that level of recognition and celebrity is a stretch.

Rams quarterback Sam Bradford was on the cusp of it with his No. 1 pick status and stellar rookie NFL season. But Bradford has faded back into the woodwork a bit after a poor second season. He may get back to that level of notoriety, but he’s not there at this moment. We don’t even know for sure if he’s a good quarterback, at this moment.

Steven Jackson is probably as readily associated with the Rams as Bradford, but “Face of St. Louis?” Mortgage evangelist Ray Vinson might have more claim to the title. As new coach of the woeful Rams, Jeff Fisher could have that profile if he turns the franchise around.

The Blues are coming off a great season, and they have an interesting white-haired mentor in Ken Hitchcock. But it’s hard to suggest a hockey figure inspires that level of national face time for any U.S. city. At the height of his powers, “Golden Brett” Hull might have approached that. And had he spent more than 15 minutes in town, Wayne Gretzky could pull that kind of weight. But I’m pretty sure when you mention St. Louis to an out-of-towner, the name “David Backes” doesn’t immediately come to mind.

The bottom line is, with Pujols gone, with Tony La Russa gone, with Kurt Warner gone, with Hull gone, with Bob Pettit long gone – and with the Ol’ Bogeyman in professional seclusion, St. Louis has no sports figures residing in the folk hero neighborhood. The job is wide open.

This is a good question since no one player stands out on any of the teams. The Rams are terrible, so they can’t have a face of St. Louis. Maybe Sam Bradford will be that guy, but not now. The Blues are pretty good, but that is a collective effort. Alex Pietrnagelo might be that guy some day, but not now. Chris Carpenter would lead the Cardinals, but he is hurt. Yadier Molina leads the Cards, but he is still emerging from the Albert Pujols’ shadow. That leaves David Freese, who certainly got the national face time after his postseason heroics. That is a lofty title for a player with such a thin career track record, but he IS photogenic.

On the national scene, I’d give the nod to Sam Bradford. St. Louis is a baseball town, but this is a football nation. The expectations of a guy drafted first overall, playing the glamour position in our national pasttime, keeps him in the conversations on Sports Center, whether he’s great or horrible. Sam is also trying to reverse his fortunes, as are the Rams.

But, we love our homegrown heroes, so I think the face of St. Louis among the locals, at the moment, is David Freese: hometown boy rises above adversity to become Series MVP.

By the way, you’d get an argument from Jets fans – and bunch of other factions – about Jeter being the face of New York. They might nominate Rex Ryan, Mark Sanchez or Tebow. Rangers fans go ga-ga over goalie Henrik Lundqvist, who is quite the man about town. And so it goes.

On the basis of his performance in the playoffs and World Series, David Freese. The Rams aren't good enough to have a face of the franchise and the Blues don't have prominent faces.

His World Series heroics may have catapulted David Freese to the city's most recognizable sports figure. (AP Photo).