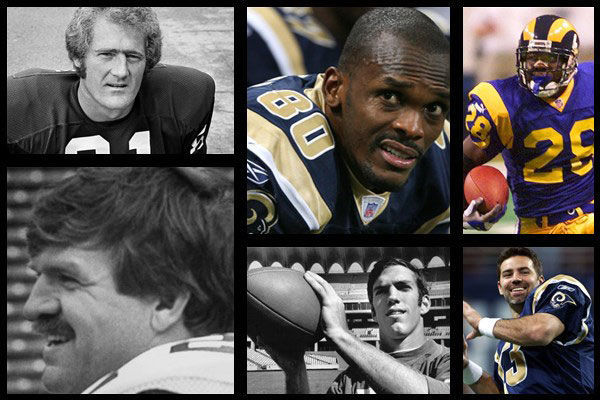 After seven years without the NFL, the Rams came to town in '95 and in a few short years brought us some of the most dynamic offensive football ever seen with the Greatest Show on Turf.

Bill Bidwill wasn't an ideal owner — far from it. But he never really wanted to leave St. Louis. Not so with Stan Kroenke, who many feel misled St. Louisans about his intentions and then trashed the region on his way out of town.

The owners can take their teams, but they can't take the memories. Late last year, we put together the All-St. Louis NFL team — and upon Kurt Warner's Hall of Fame induction over the weekend, thought this would be a good time to re-publish it.

Some excellent players, such as running back Ottis Anderson, defensive end Robert Quinn, and place-kicker Jeff Wilkins did not make the first team. Some very good ones, such as Jim Otis, Tom Nutten, Irv Goode, and Pat Fischer did not make the second team.

But eight members of the Pro Football Hall of Fame are represented now that Warner has been voted in. And in time that number could grow to 10 with respect to Isaac Bruce and Torry Holt.

That's a pretty good number for a baseball town, don't you think? 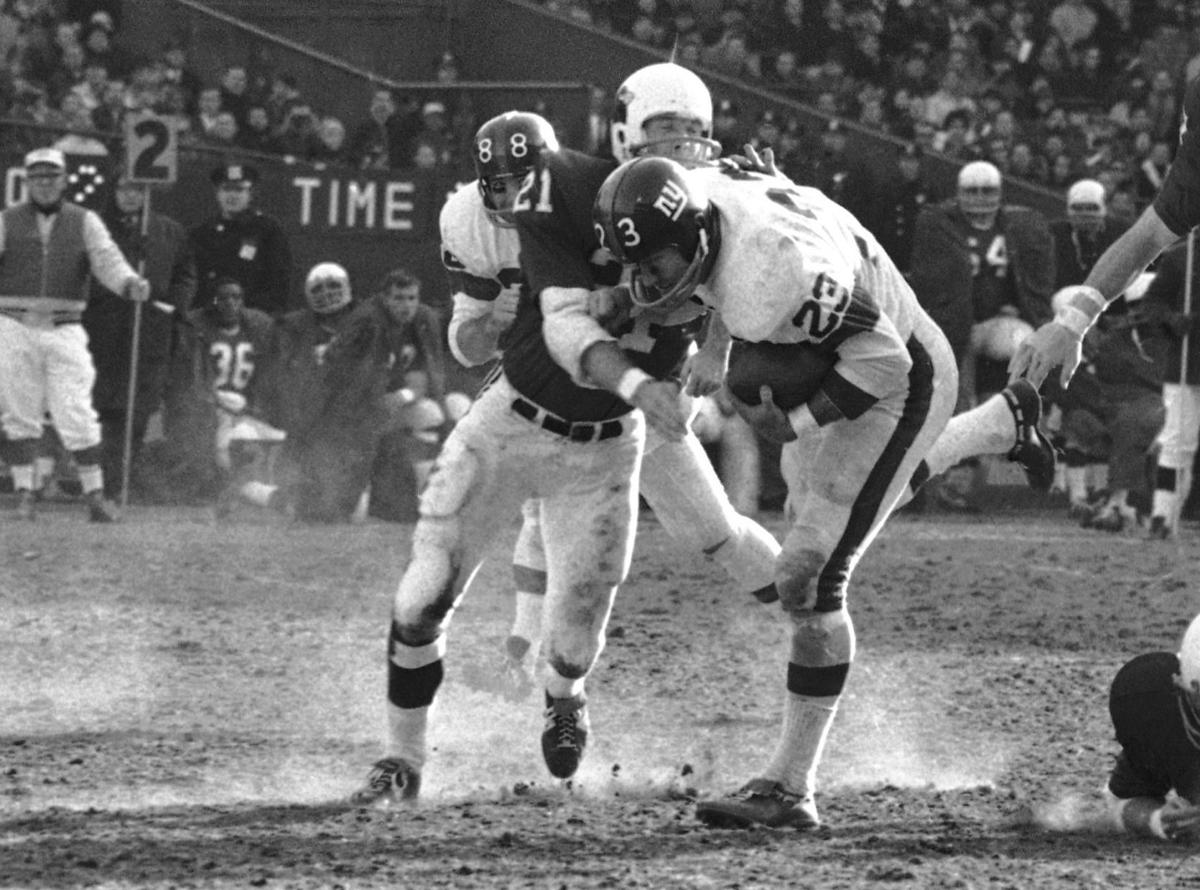 After finishing second to Terry Baker in the 1962 Heisman Trophy voting, Stovall was chosen No. 2 overall in the '63 NFL draft. For the better part of a decade, he and Larry Wilson formed one of the game's best safety tandems. Stovall (shown above tackling the Giants' Ernie Koy at Yankee Stadium in 1967) made three Pro Bowls, had 18 career interceptions, and also handled punting chores. 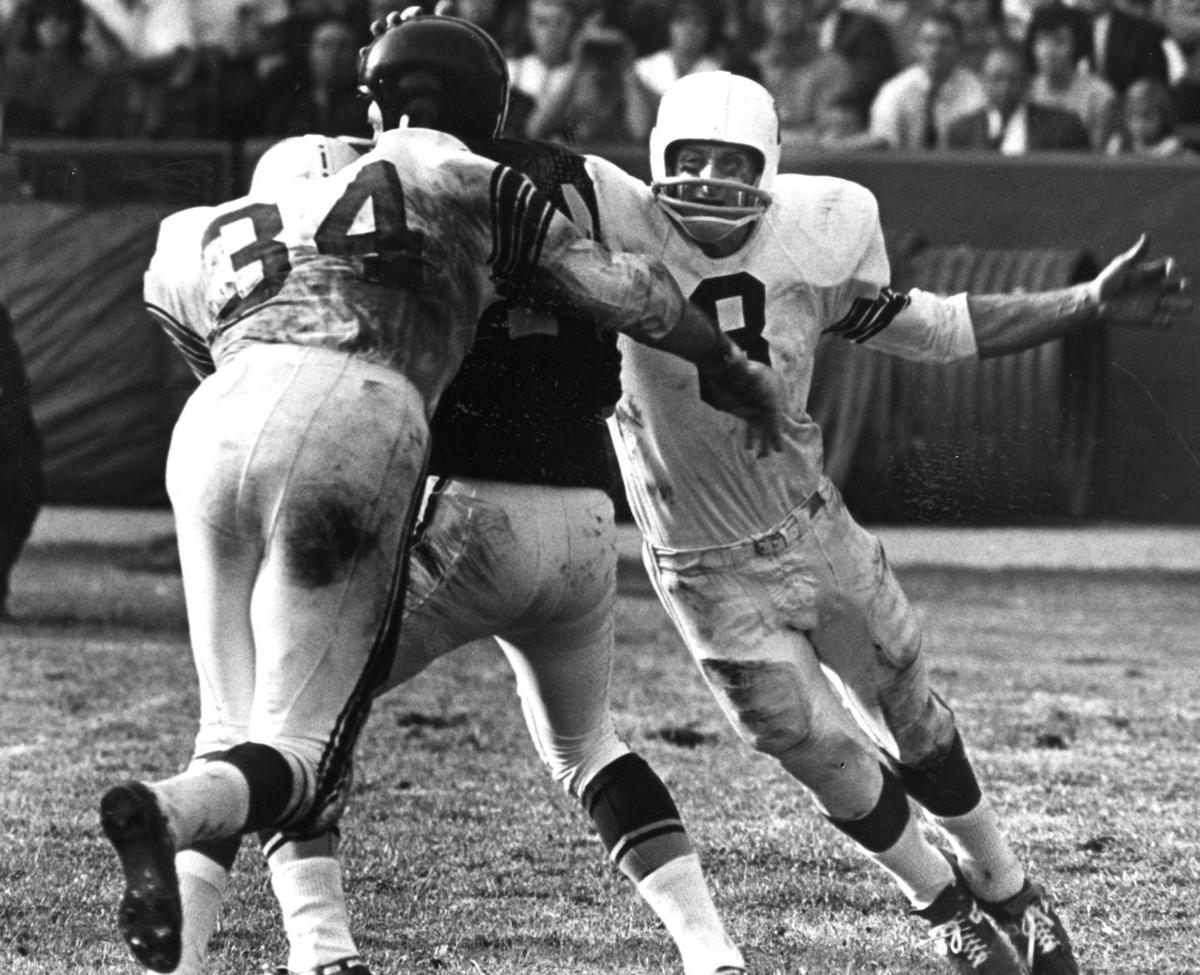 Wilson didn't invent the safety blitz, but certainly popularized it. A ballhawk of the highest order with 52 career interceptions, including picks in seven straight games in 1966. You want toughness? Wilson (No. 8 above) once intercepted a pass wearing casts on both hands due to broken wrists. Eight-time Pro Bowler, and Hall of Famer. 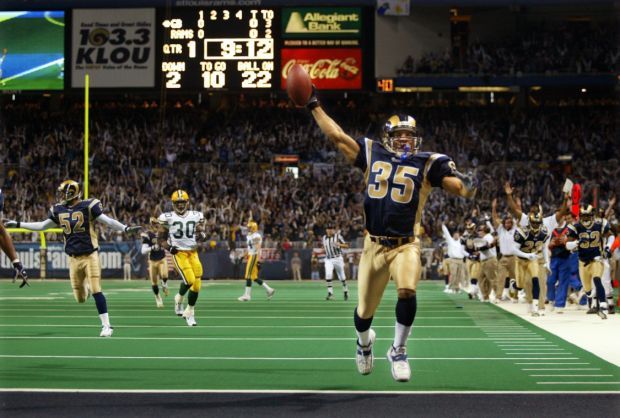 He was a six-time Pro Bowler when he became a Ram via a draft-day trade with Arizona. But he wasn't done yet. Williams played both corner and safety in St. Louis, earning two more Pro Bowl berths to put a cap on a Hall of Fame career. He dominated on defense during the team's 2001 playoff run. Just ask Brett Favre — Williams returned two interceptions for TDs in the playoff game vs. the Packers. 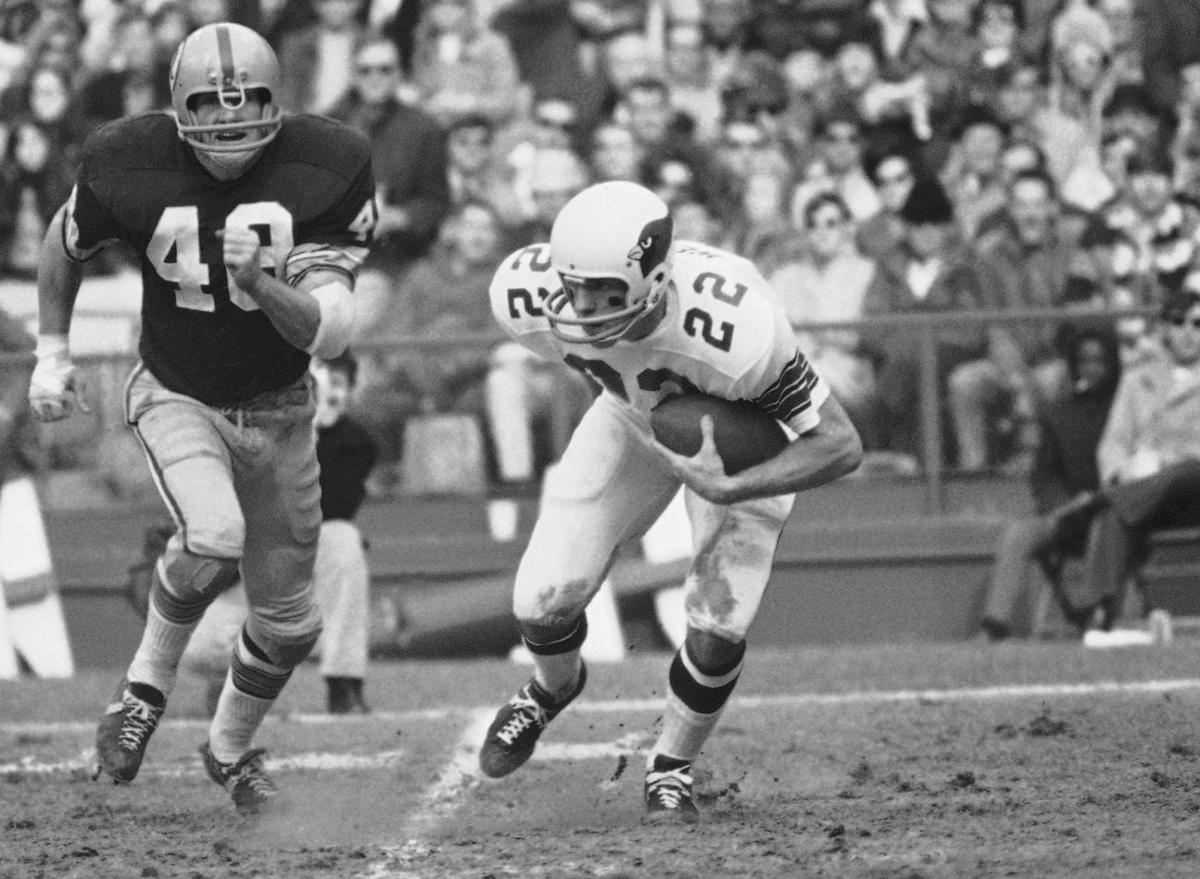 After an all-American senior year at Mizzou, Wehrli started as an NFL rookie and became a fixture in the Big Red secondary, playing 193 games with 40 interceptions. Dallas Hall of Fame QB Roger Staubach claims the term "shutdown corner" originated as a description of Wehrli, a Hall of Famer and seven-time Pro Bowler. 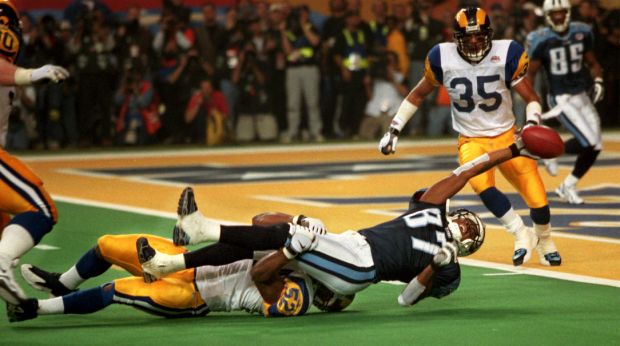 A college running back at Missouri, Jones was switched to linebacker by Al Davis in Oakland. A free-agent pickup by the Rams in 1997, Jones always did his job, almost always was in the right spot. That was never more evident than the "The Tackle" (above) of Kevin Dyson to preserve the Super Bowl victory over Tennessee. 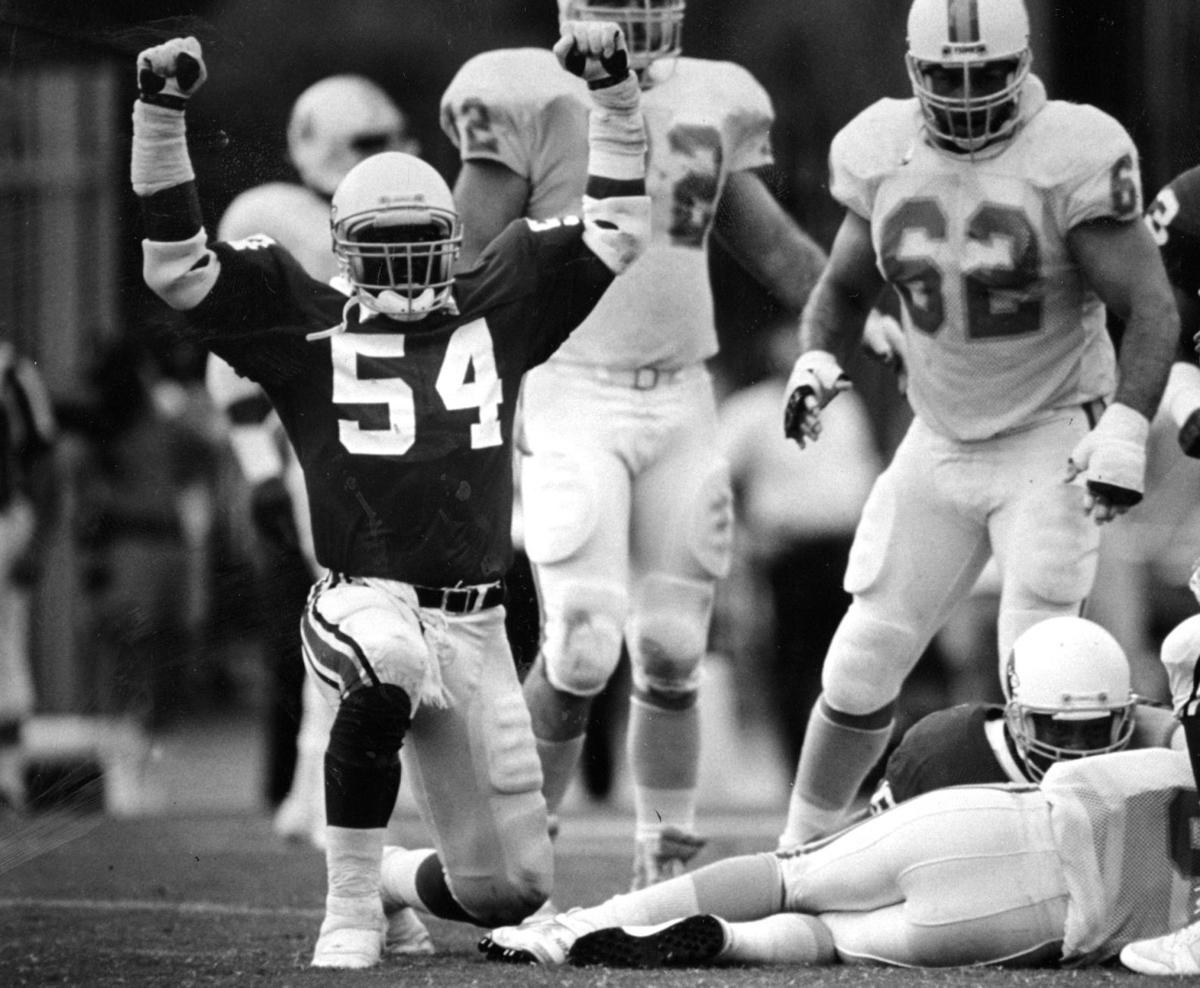 The Post-Dispatch once described Junior (No. 54) as a shark who brought down runners like they were swimmers in "Jaws" — it was sudden and hurt a lot. A No. 5 overall draft pick, and two-time Pro Bowler, Junior had 9½ sacks in 1984 and five interceptions in 1985. He played both outside spots and the middle for the Big Red. 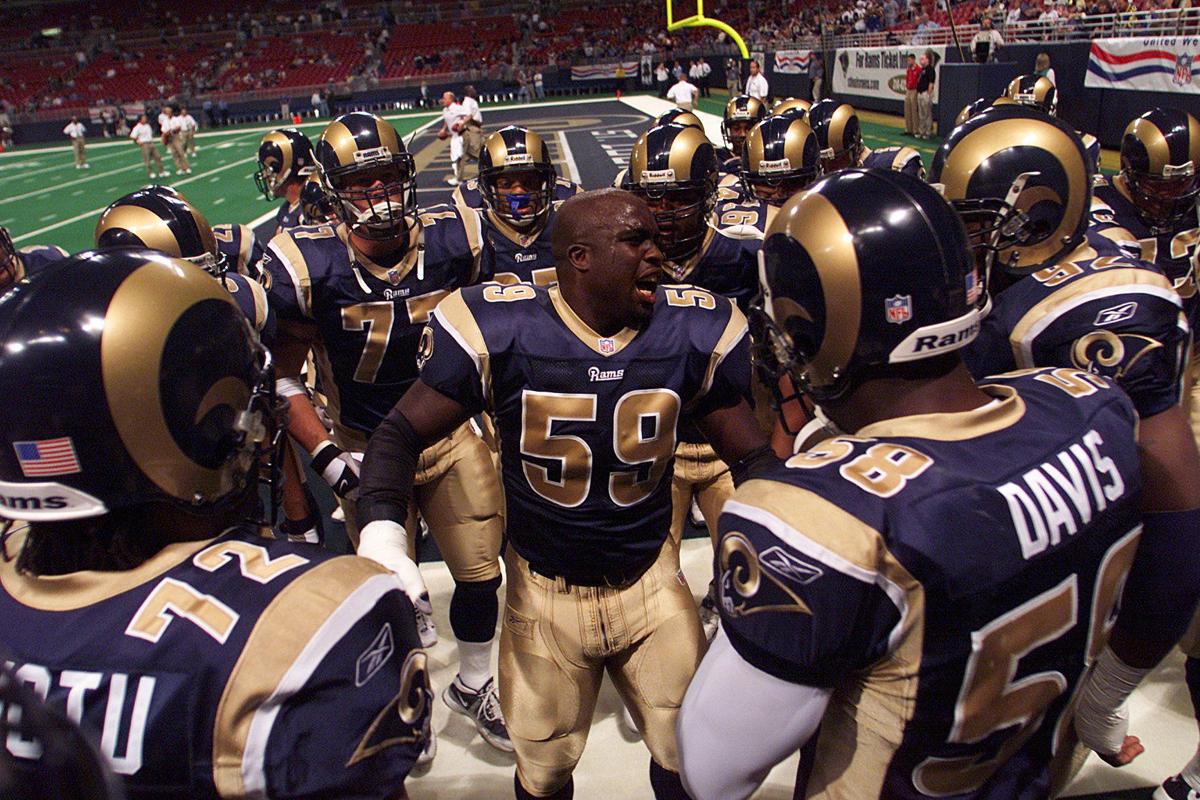 The veteran of 16 years spent his first four as a hard-hitting, snarly Ram who enjoyed stirring the pot for an underrated defense. He was everything you would want in the middle of your defense, playing with speed, passion and attitude. Fletcher (No. 59) flew around and regularly racked up double-figure tackle totals. 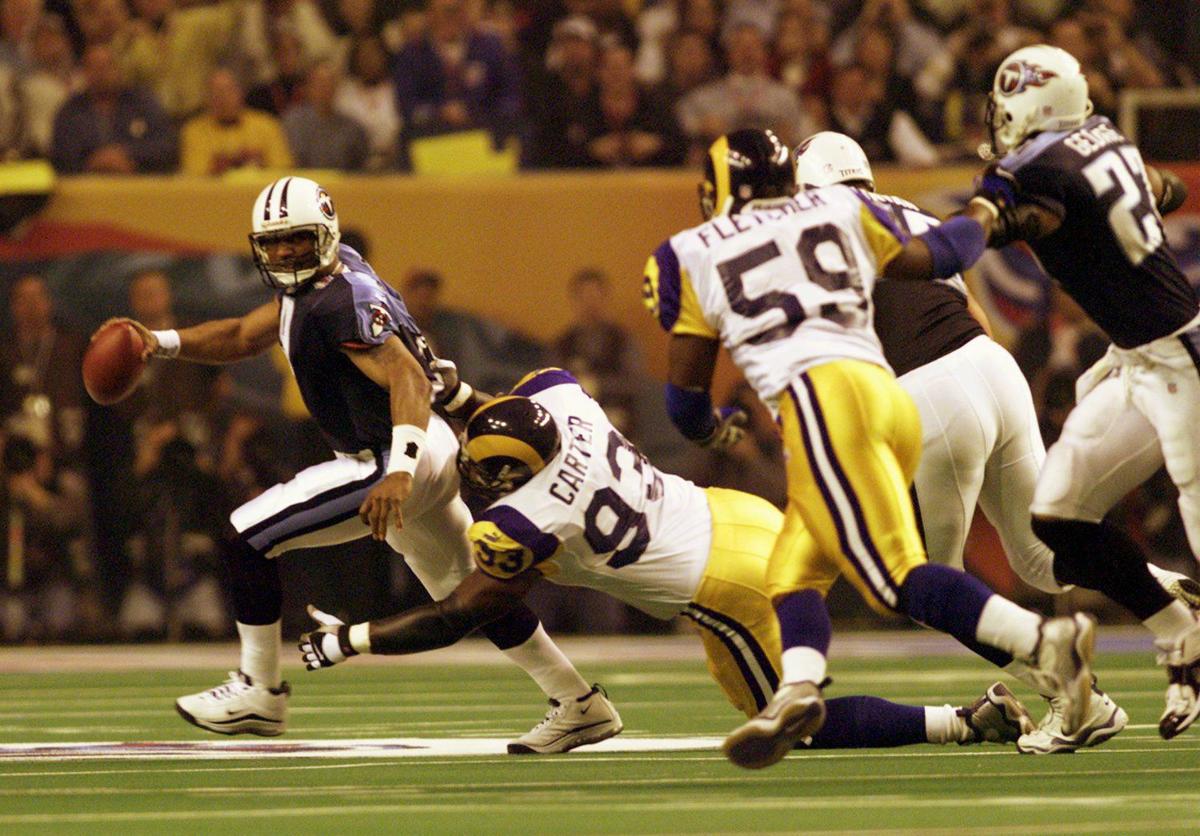 Dubbed the original "St. Louis" Ram, Carter was the first player drafted by the team after its move to the Midwest. He quickly became a cornerstone on defense, leading the league in sacks during the '99 Super Bowl season (above, he runs down Titans QB Steve McNair in the Super Bowl). A blend of size, power, quickness and athleticism, Carter was adept at playing the run and the pass. 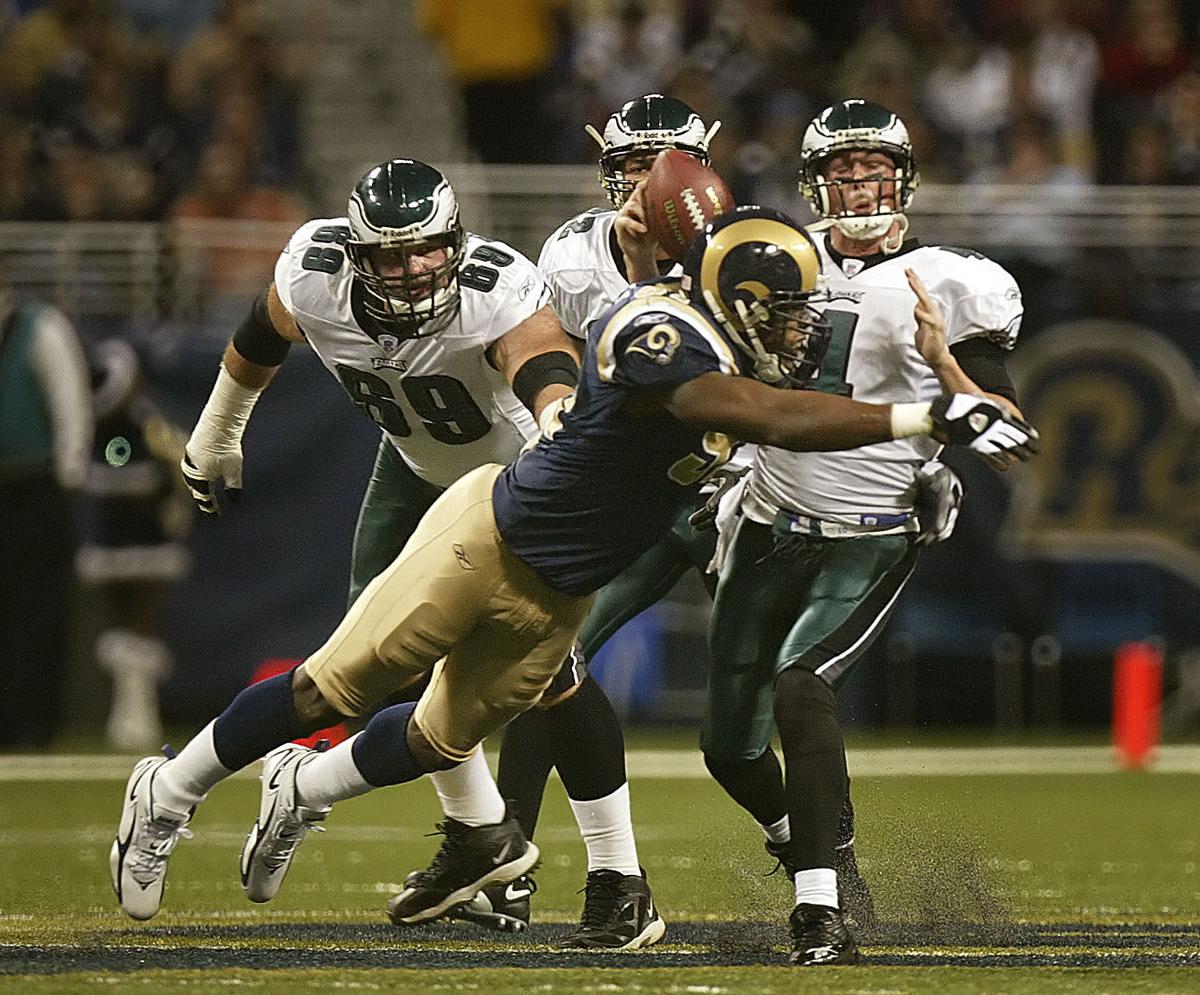 Little was the definition of an edge rusher, quicker off the ball than anyone this town has ever seen wearing the home colors. He racked up 87½ sacks and 31 fumbles over 147 games, leading the Rams in sacks in six seasons. His legacy includes the drunken-driving fatality he was responsible for as a rookie. 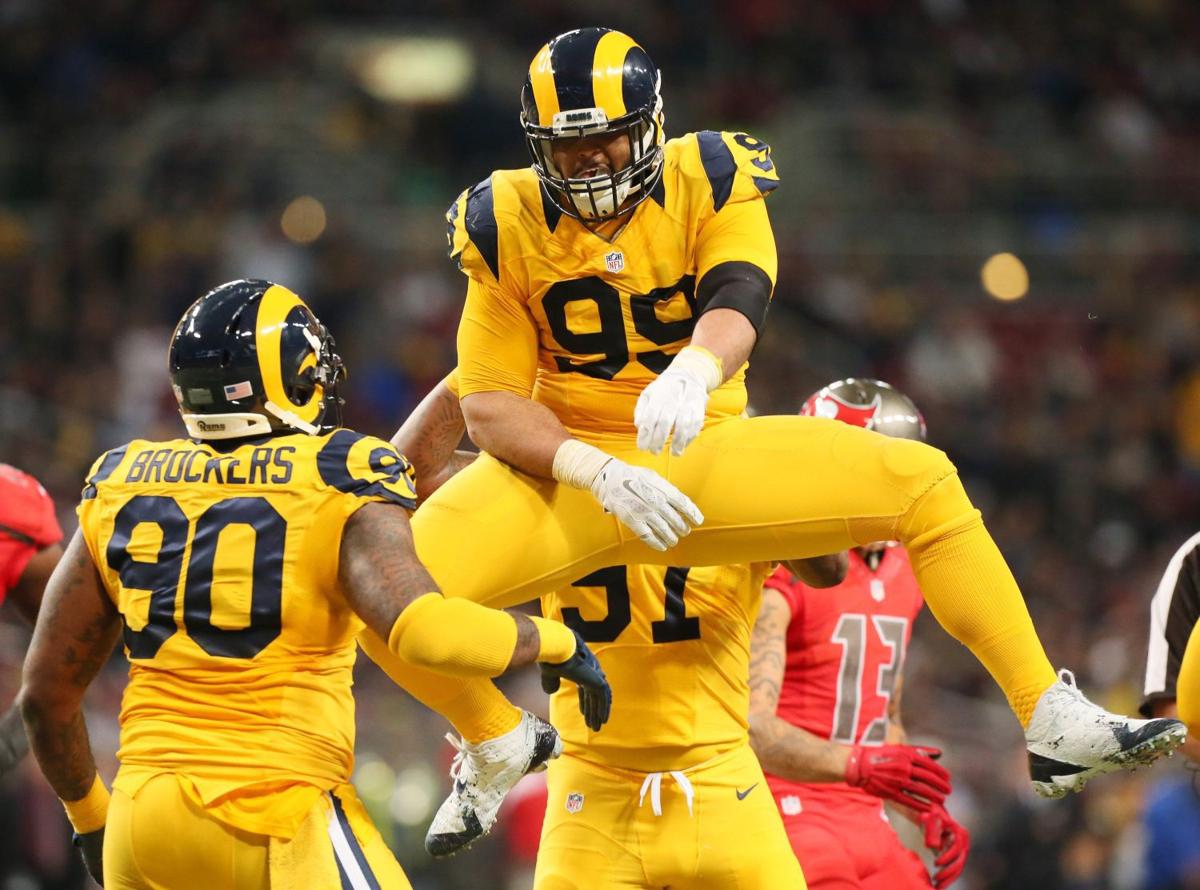 Donald needed only two seasons in St. Louis to leave an indelible mark on the local gridiron landscape. Broke the Rams' rookie record with nine sacks in 2014 en route to NFL defensive rookie of the year honors. Donald (No. 99) was even better in 2015, with 11 sacks, 22 tackles for loss, 49 quarterback pressures, and 29 QB hits. 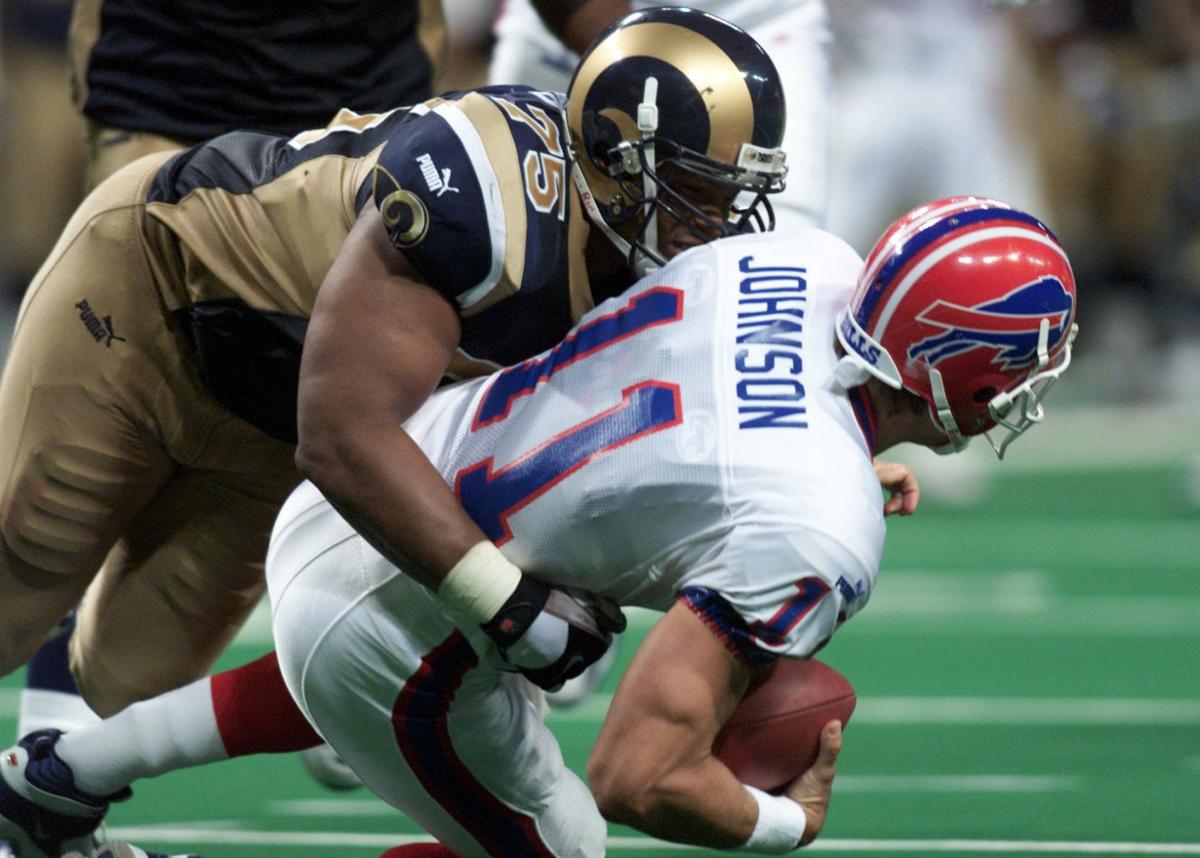 In many ways, Farr was Aaron Donald before Aaron Donald — a quick, undersized, disruptive interior force who played with leverage and great energy. Knee issues robbed Farr of career longevity. As a result, he made only one Pro Bowl. But when healthy, Farr, shown above registering a sack against Buffalo in 2000, was practically unblockable. 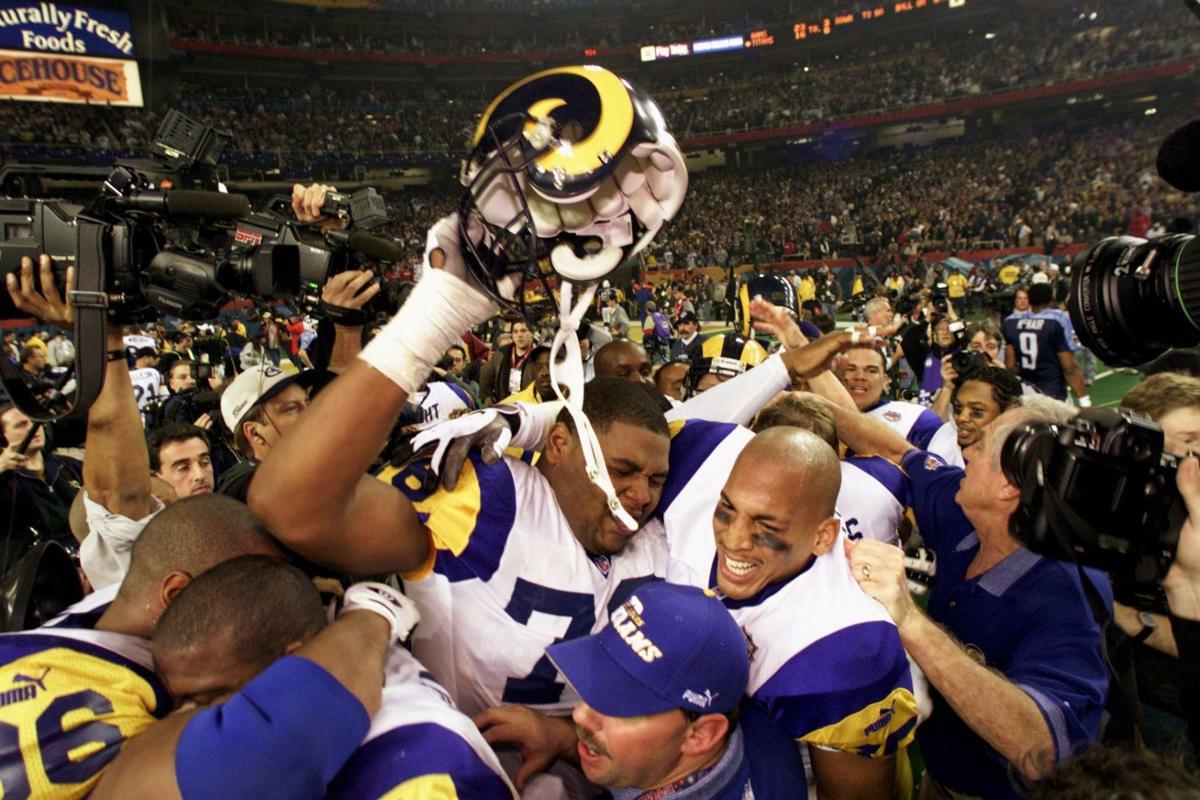 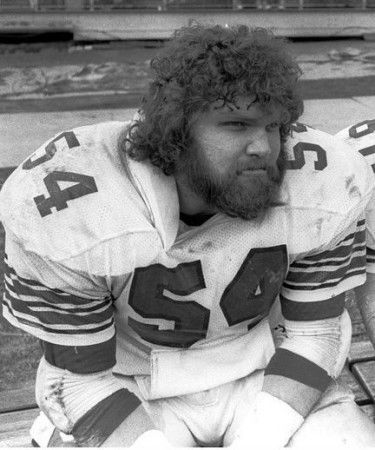 Drafted in Round 8 out of Auburn in 1970, Banks sat out his rookie year with a knee injury, but then took over the center spot for basically the next decade. It was said that Banks played with great ability but even greater effort. A free spirit, and an outspoken critic of team management, he made four Pro Bowls. 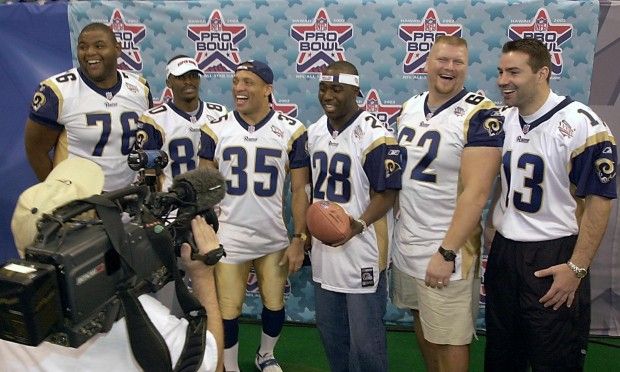 Undoubtedly the best free-agent pickup during the Rams' 21 seasons in St. Louis. He was signed away from Green Bay prior to the 1999 Super Bowl season to help neutralize San Francisco's Pro Bowl DT Bryant Young. Timmerman (second from right, above) did that and more as one-half of the "Doughnut Brothers" tandem with center Andy McCollum. 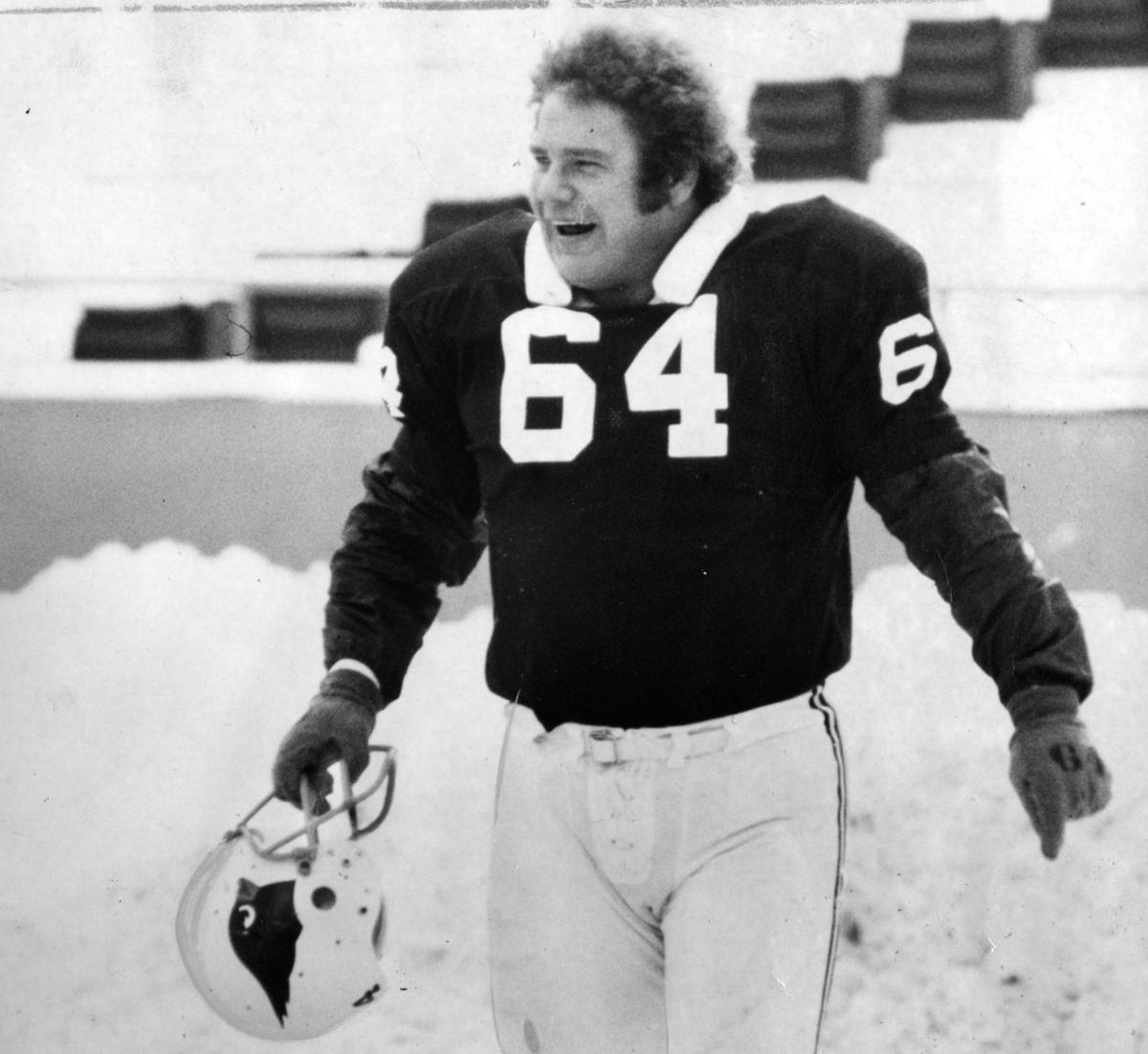 Young was a fixture on those great Cardinals lines of the 1970s, including the 1975 unit that tied an NFL record by allowing only eight sacks. A two-time Pro Bowler, Young was all about brute strength, routinely delivering punishing hits. Before almost any short-yardage play, he'd say "over me, over me" in the huddle. 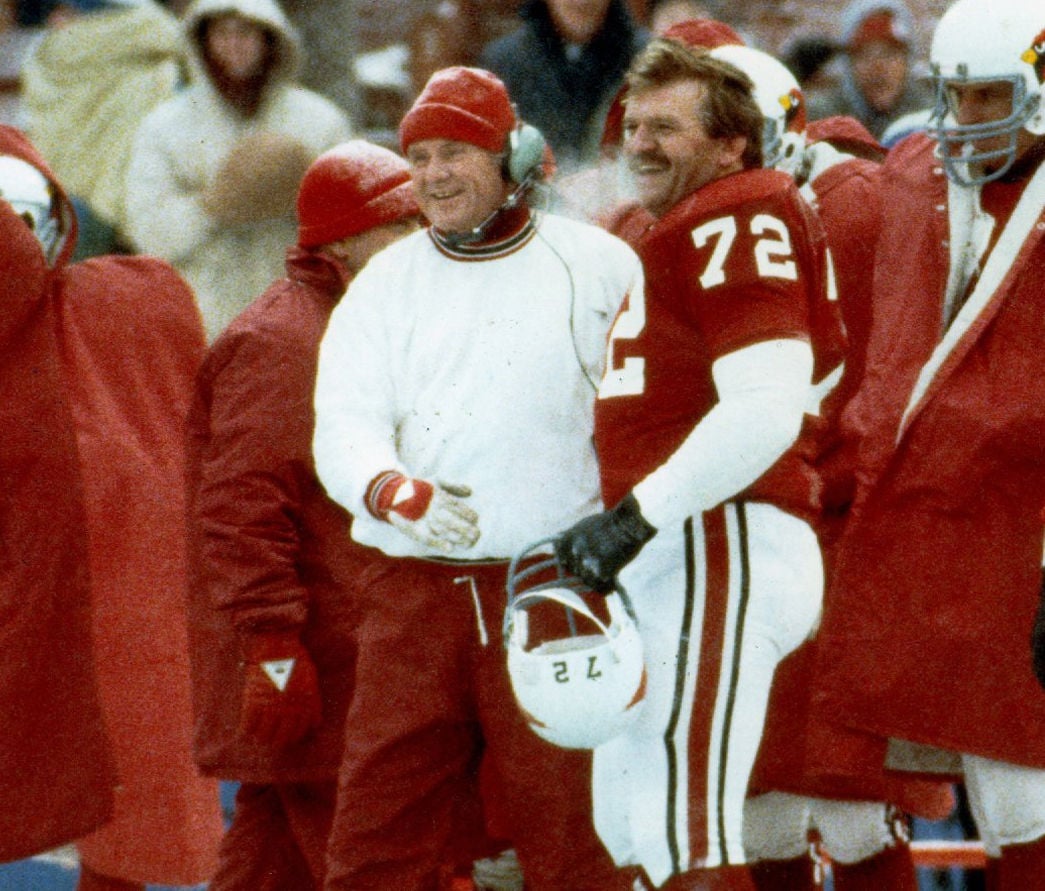 Smart and physical, he never made a mental error and was an "unbelievable" drive blocker according to former coach Jim Hanifan (next to Dierdorf, above). Long before he became an accomplished broadcaster, Dierdorf made six Pro Bowls and the NFL's all-decade team of the 1970s. He entered the Hall of Fame in his hometown of Canton, Ohio, in 1996. 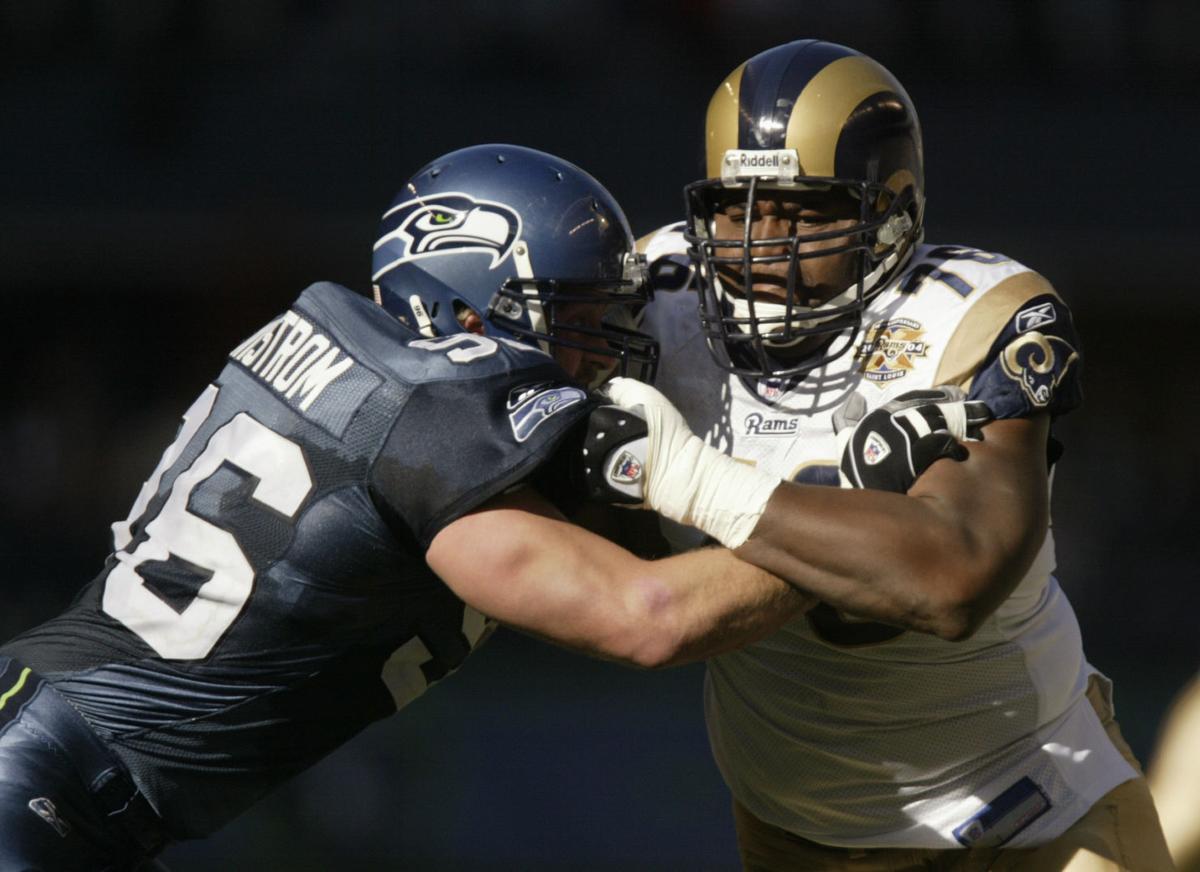 If only all No. 1 picks turned out like this. He started 154 games and anchored an offense that finished among the league's top five in passing yards for eight consecutive seasons. You'd be hard-pressed to find a better pass-blocker in NFL history. A seven-time Pro Bowler and member of the Pro Football Hall of Fame. 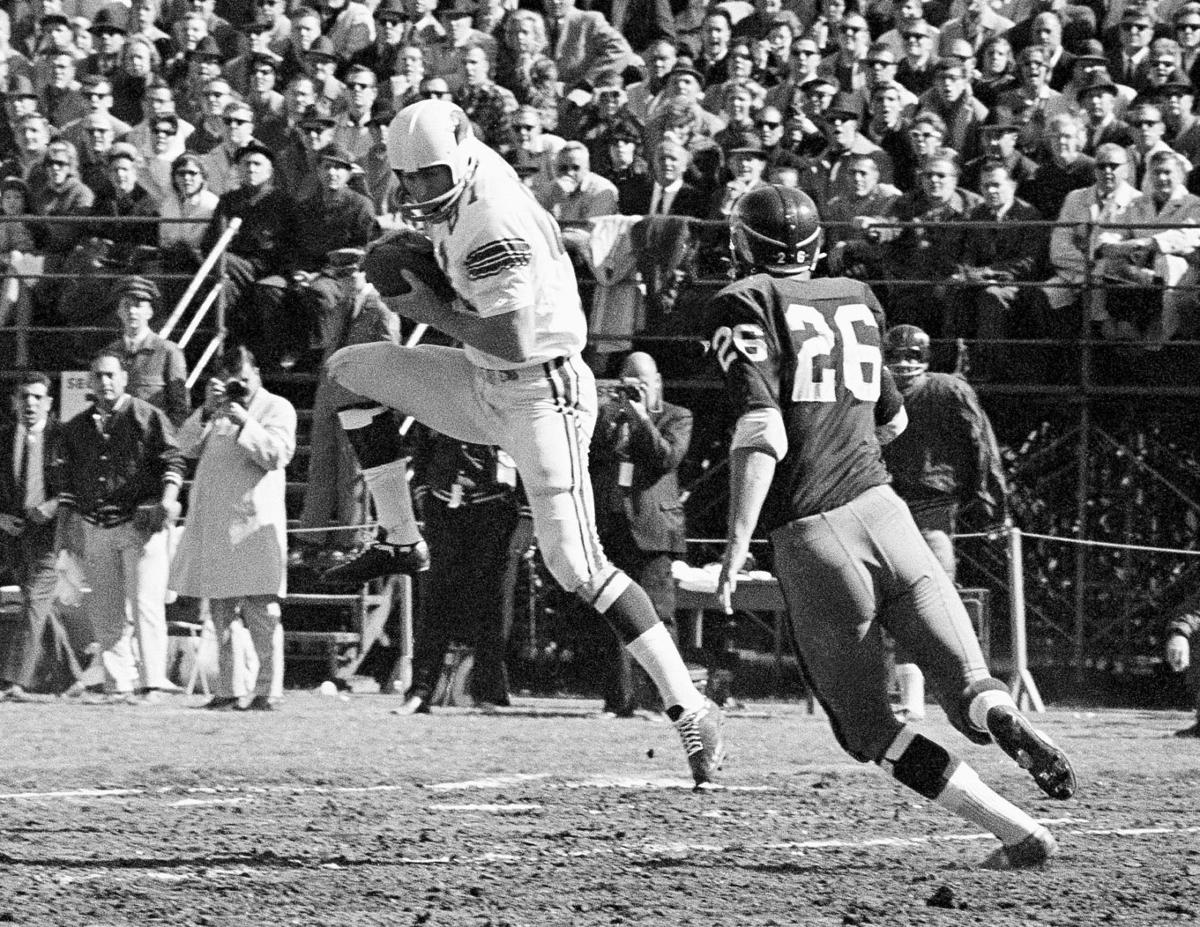 Known as the "practically perfect" tight end, Smith could run past or through defenders and was an excellent blocker. During an era when tight ends weren't featured as much in the passing game, Smith (in a 1965 game, above) had seven seasons of 40-plus catches. The five-time Pro Bowler was only the third tight end to make the Hall of Fame. 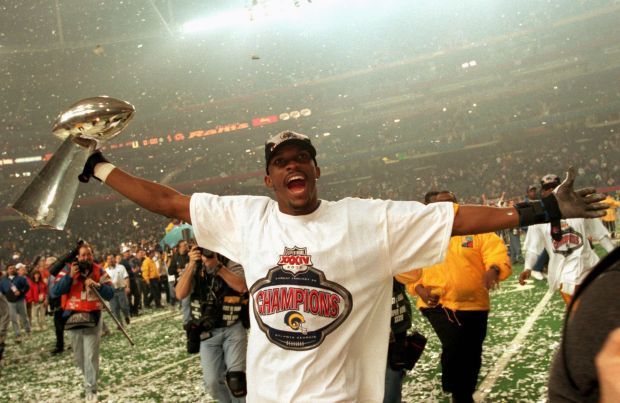 Bruuuuuce! He arrived as a Los Angeles Ram and quickly became a St. Louis legend. Be it the game-winning TD against Tennessee in Super Bowl XXXIV, or his four TD catches on the day the Rams snapped a 17-game losing streak to the rival 49ers, no one made more big plays when it counted. Four-time Pro Bowler. 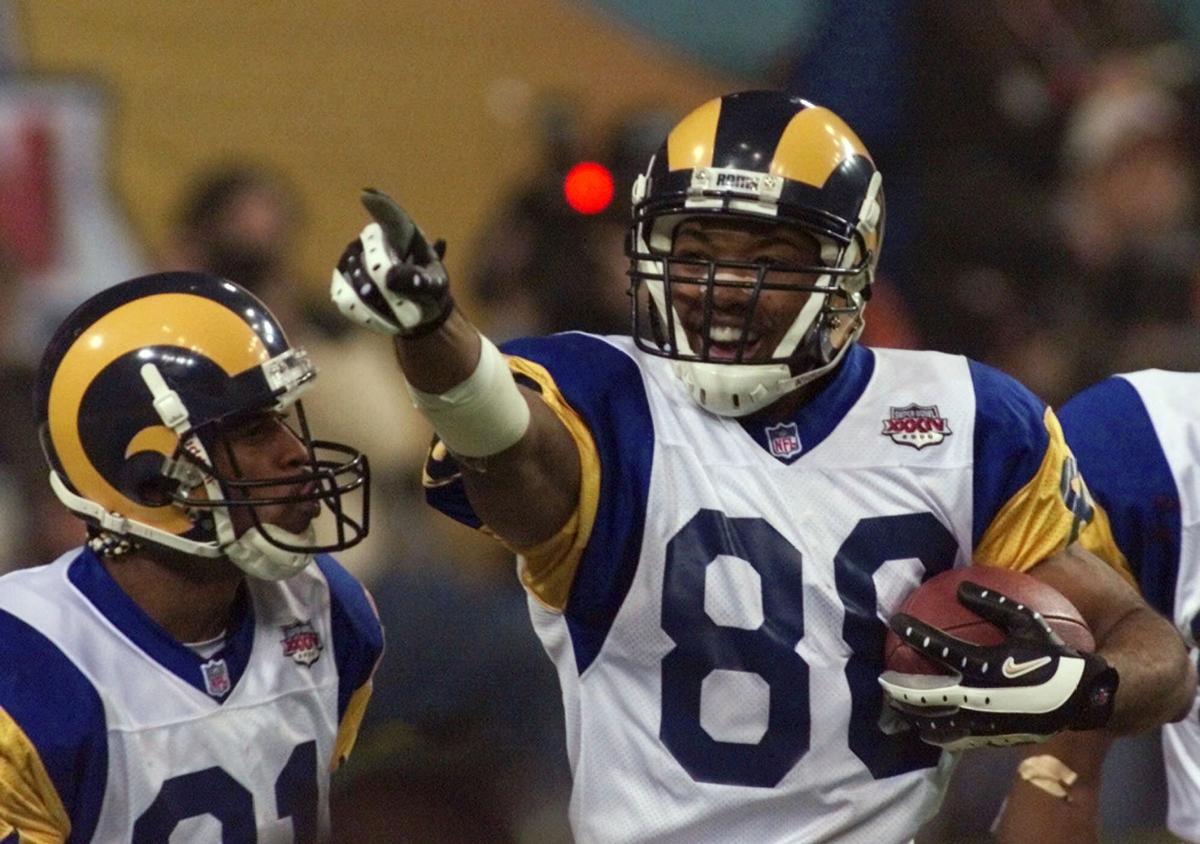 When your nickname is Big Game, you better deliver. He did, piling up 869 catches, 12,660 yards, and 74 TDs during his time as a Ram. He is the only player in NFL history to top 1,300 receiving yards in six straight seasons, doing so from 2000-05. The seven-time Pro Bowler had great hands and deceptive speed. 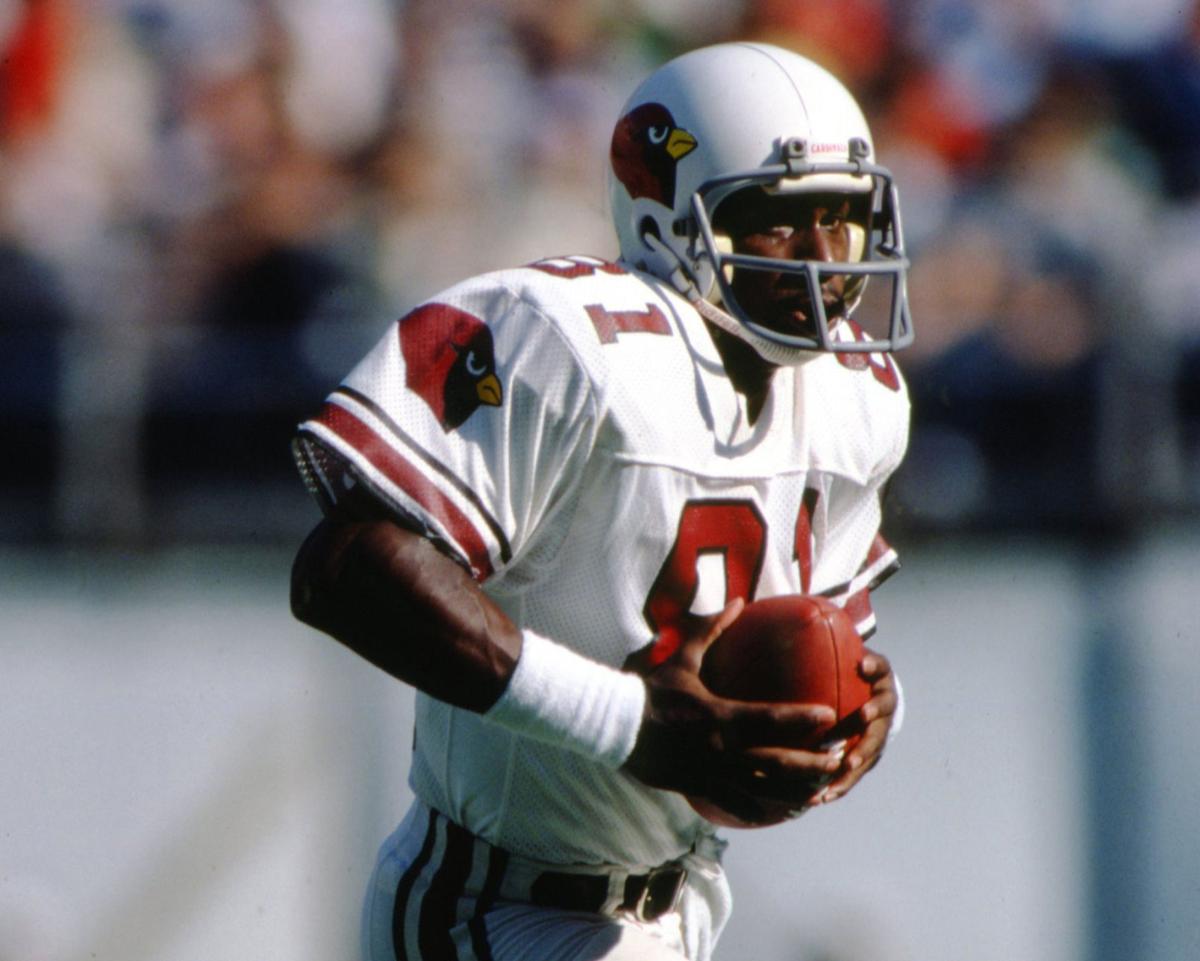 You don't get a nickname like "Jet Stream" for being slow. Green was one of the league's fastest players, a feared deep threat who had a pair of 1,000-yard seasons for the Cardinals in St. Louis. And keep in mind, he was a converted defensive back who wasn't even tried at wide receiver until his third NFL season. 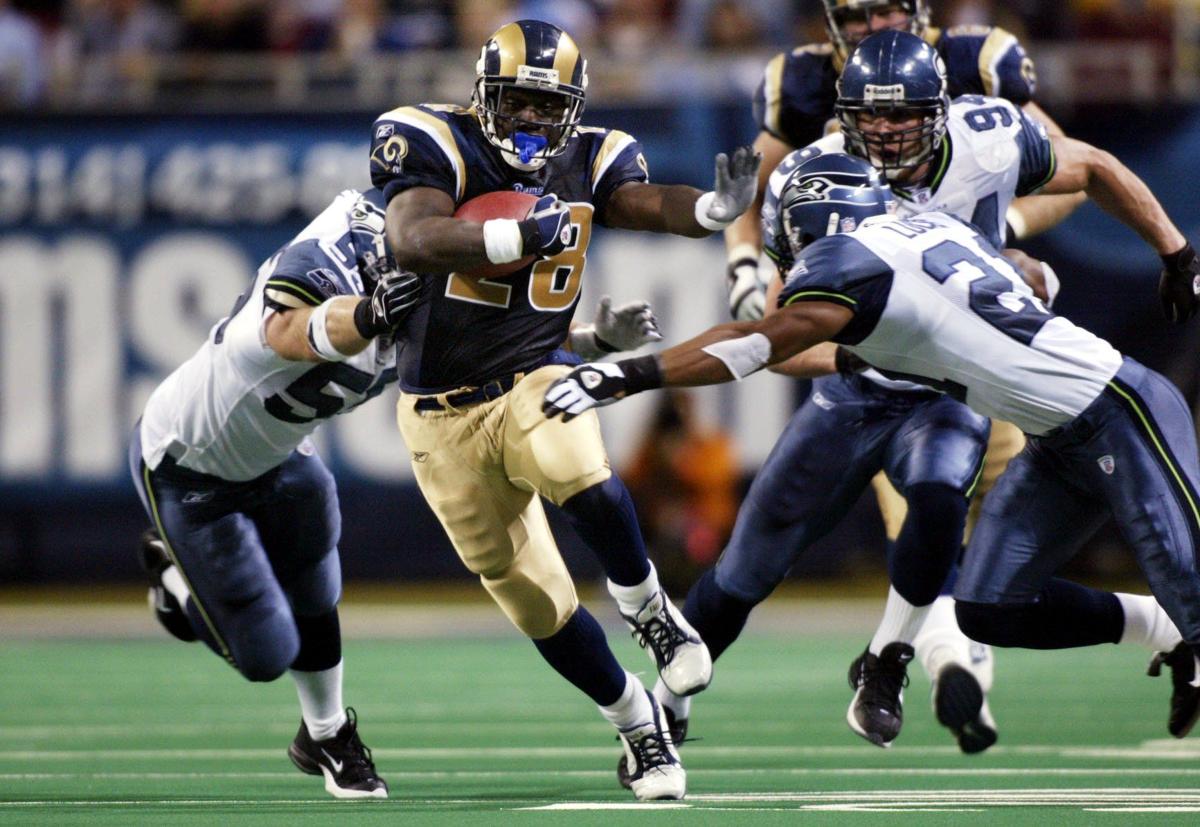 The New Orleans kid who once sold popcorn in the Superdome shattered records, won a Super Bowl, and cemented a Hall of Fame legacy here. Arguably the best all-purpose back in NFL history, Faulk could slash through defenses as a ball carrier but was also a gifted receiver. A four-time Pro Bowler and league MVP in 2000. 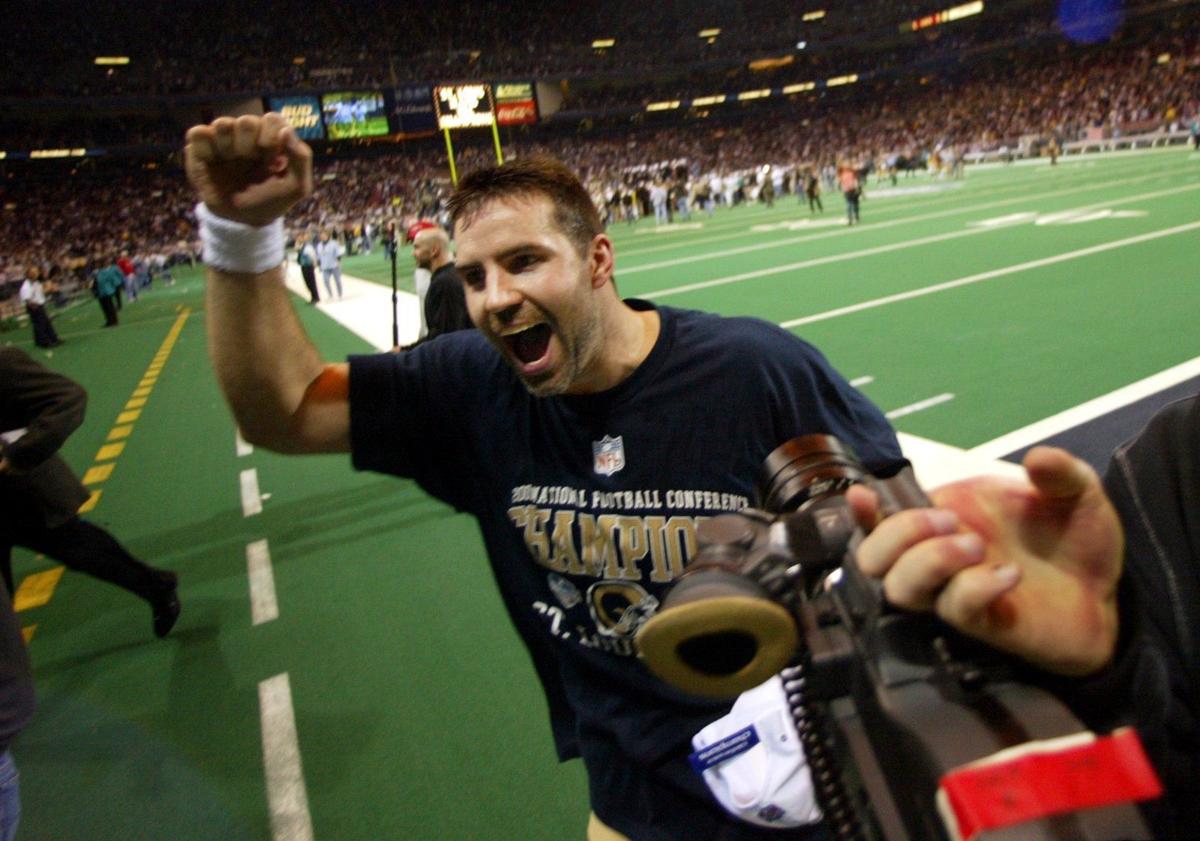 One of the ultimate "out-of-nowhere" stories in NFL history. Went from stocking grocery shelves, to the Arena League, to backing up Trent Green, to leading the Greatest Show on Turf to a pair of Super Bowls. Great accuracy, vision, and toughness. Two-time league MVP, Super Bowl XXXIV MVP, and three-time Pro Bowler. And now, enshrined at the Pro Football Hall of Fame. 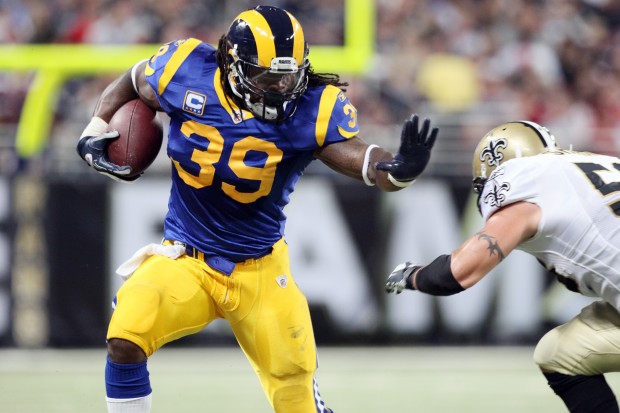 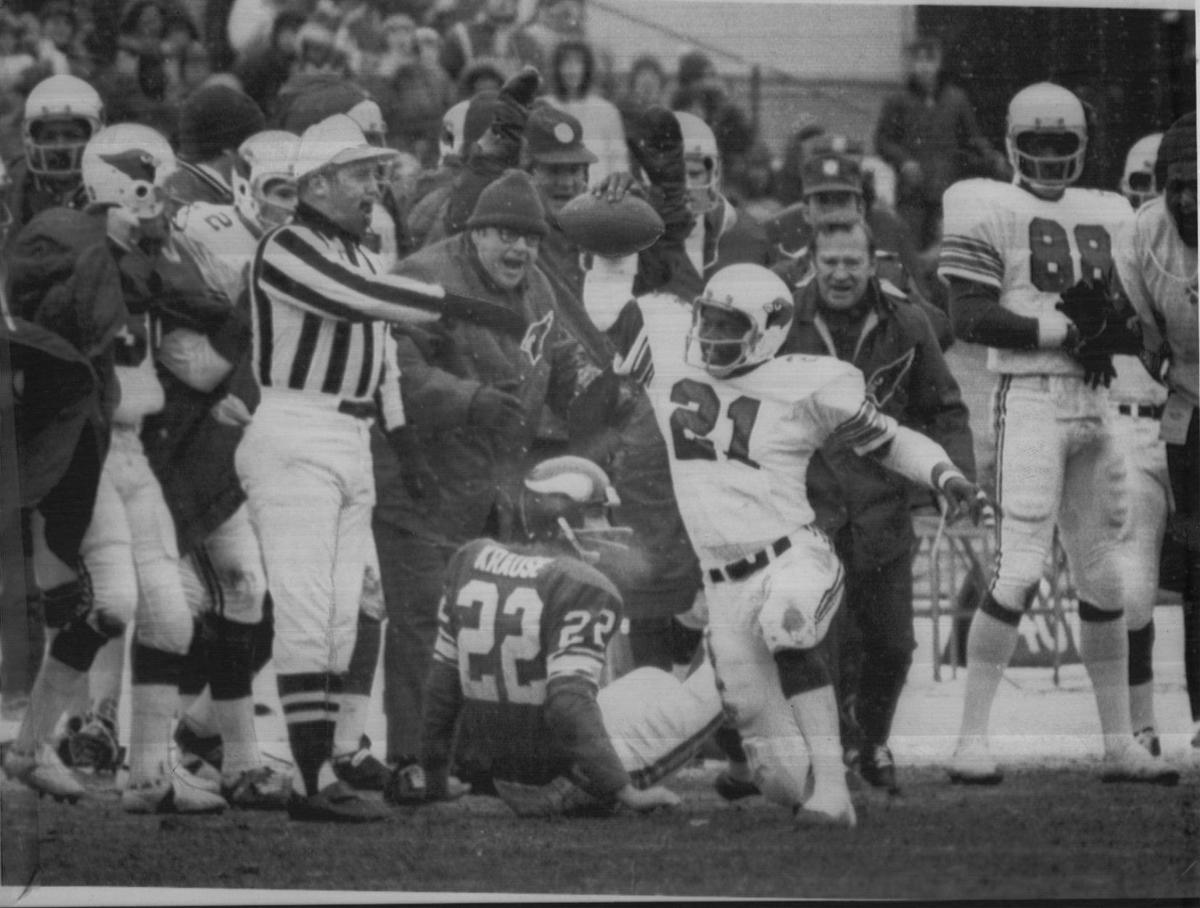 Best of the Special Teams

• Punt returner: Terry Metcalf (No. 21 in photo above, during the 1974 playoff game at Minnesota) 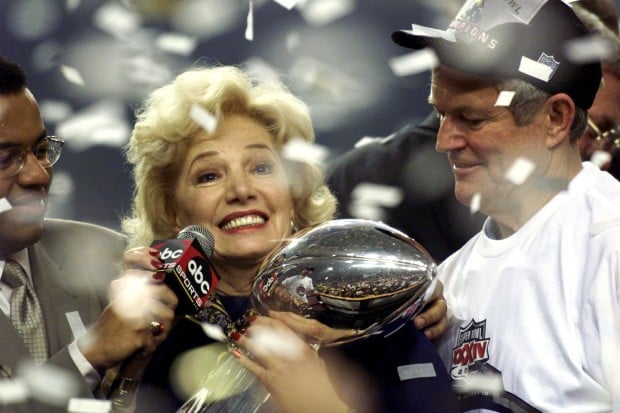 Best of the Coaches, GMs, Owners

• Owners: Georgia Frontiere (1995-2008; shown above with coach Dick Vermeil and the Lombardi Trophy)

Warner, Bruce closing in on NFL Hall of Fame

It's the first time Bruce has made the finalist list; the third time for Warner.

Three years ago: the feckless thugs of the NFL left St. Louis with just memories

Cowboys owner Jerry Jones was a major player in getting the Rams out of St. Louis. Today Jones' Cowboys play Kroenke's Rams in the playoffs.

20 years ago: The Greatest Show on Turf has its coming-out party

Local and national updates and analysis delivered to your inbox.

Step into the new year with a free gym membership!