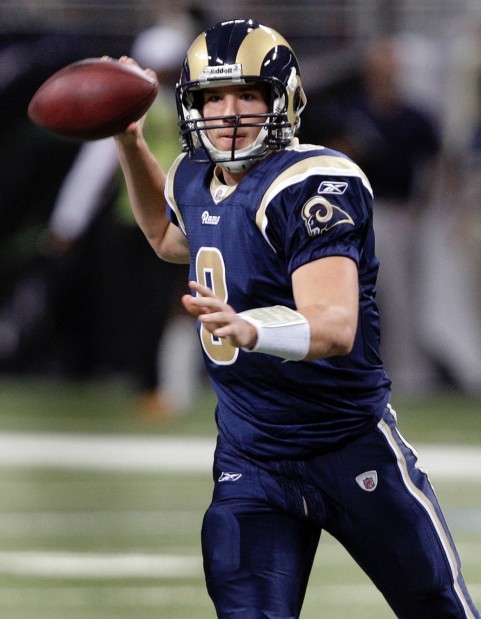 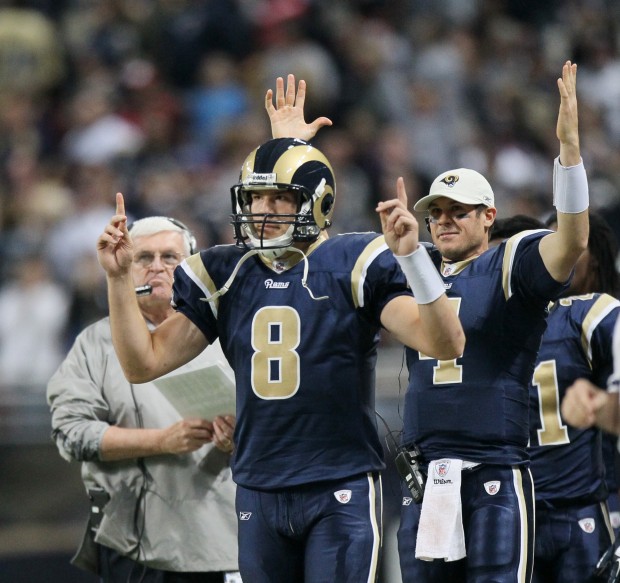 December 26, 2010 -- Rams quarterback Sam Bradford and backup quarterback A.J. Feeley optimistically signal for the touchdown as a Danario Alexander catch is reviewed in fourth quarter action during a game between the St. Louis Rams and the San Francisco 49ers at the Edward Jones Dome in St. Louis, Mo. The initial ruling of a touchdown was reversed as Alexander stepped out of bounds, but the Rams scored on the ensuing play. Chris Lee clee@post-dispatch.com 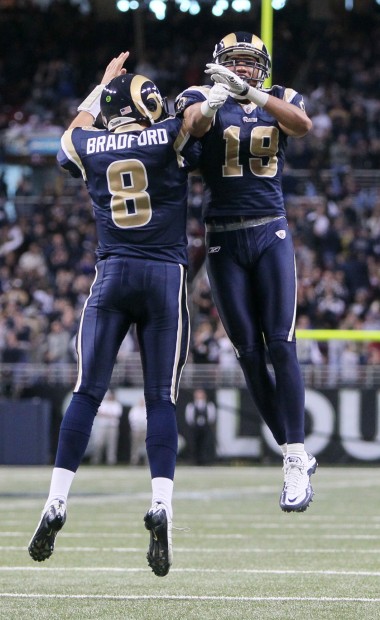 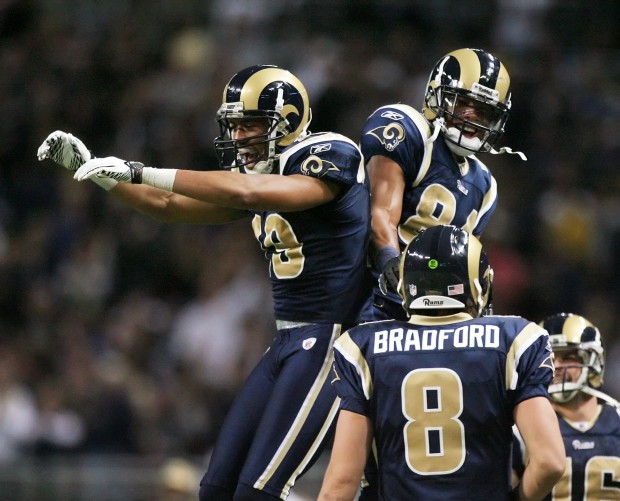 With one regular-season game to play, and possibly the playoffs, Sam Bradford is putting the finishing touches on one of the greatest rookie seasons by a quarterback in NFL history.

He already has set NFL rookie marks for most passes thrown without an interception (169) and most completions (335). He also is among the top five rookie leaders in attempts, yards, and touchdown passes in league history.

Bradford doesn't get worked up over such achievements, saying he just wants to win. But there's one pending feat that he does take great pride in: With one game to play in the regular season, he has taken every snap at quarterback for the Rams. Throughout the entire league, only Baltimore's Joe Flacco and Indianapolis' Peyton Manning can also make that claim.

If Bradford does it for one more game this Sunday in Seattle, he will become only the fourth NFL quarterback to take every snap as a rookie since the advent of the 16-game schedule in 1978.

"The question on Sam Bradford was: Is he physically durable?" said Howie Long, the Hall of Famer and current Fox NFL Sunday pregame analyst.

Long knows the Rams better than any national analyst out there because his son Chris plays defensive end for the team. He has watched every snap of the 2010 Rams season and remembers a telling hit Bradford took in the preseason opener against Minnesota.

"I remember the exact play," Long said. "It was (Brian) Robison, he kind of did a little delay step inside, came around the corner" and clobbered Bradford.

"It looked like it was the kind of hit that would definitely test where he was physically in terms of the injury that he had sustained at Oklahoma," Long continued.

Bradford got right up and kept playing, a trend that would continue through the preseason and regular season.

"I think he's tough," Long said. "He's shown that he's incredibly durable because he's taken a number of big hits this year and gotten up and dusted himself off and goes on to the next play. Which I think was a big question. I think he's answered that question in spades."

Bradford credits his offseason training, in getting bigger and stronger, for helping him deal with the physical rigors of NFL quarterback play. And although there have been a few games where he has taken lots of hits — most notably, the first Arizona contest plus the New Orleans and Kansas City games — the pass protection has been pretty good this season.

From that regular season opener against Arizona when Bradford threw 55 passes, the coaching staff hasn't treated him like a rookie. Surprisingly, only Manning at Indianapolis (638) and Drew Brees of New Orleans (620) have thrown more passes than Bradford (554) this season.

"Over the 15 games that we've all been together I think all the guys, myself included, realize that Sam is a competitor," coach Steve Spagnuolo said. "He enjoys playing. He's good for our football team. We're glad we have him as a quarterback, but I think he proved early that he could go out there and do the things you need to do as a quarterback in the NFL."

Backup quarterback A.J. Feeley, who began the preseason as the starter, said Bradford has been a quick study in adapting to NFL football. Back in August, it wasn't a certainty that Bradford would be the opening-day starter. But Feeley suffered a thumb injury in preseason game No. 2 against Cleveland, and Bradford played very well in the final two preseason games against New England and Baltimore.

"But the guy progressed very fast. And even if I hadn't gotten hurt, who knows, he might have still been given the nod (on opening day) because he was ready. It wasn't a fluke that he's played well through these 16 weeks. The kid's a pretty special player."

Once Bradford showed that his surgically repaired throwing shoulder was fine during the offseason workouts and early in training camp there were no doubts about what Bradford could do as a thrower. His arm strength and accuracy set him apart from most.

But one thing that surprised Feeley and others is what Bradford can do with his feet.

"I didn't know he was that athletic," Feeley said. "His ability to move out of the pocket and throw on the run, and escape to kind of protect himself was very surprising. I mean, this guy can move around."

Spagnuolo emphasizes team play, and Bradford has been a good teammate, never trying to draw attention to himself and always praising others. But his impact in helping lift this team out of the morass of 6-42 from 2007-09 can't be denied.

"The further away I get from the game as a player, the more apparent it becomes to me how significant it is to have a true franchise quarterback," said Long, who played his last game for the then Los Angeles Raiders in 1993. "I think Sam is a game-changer — for the city, for the organization. He's a game-changer for your defense."

"You have to give Sam credit," cornerback Ron Bartell said. "We felt like we were a decent defense last year. We felt like with better quarterback play, that improves a defense's chances. The less we're on the field, the better. So he deserves all the credit he's getting."

Of course in a season already littered with records and feats, there's another significant milestone looming on the horizon. A victory in Seattle would make Bradford the first NFL quarterback drafted No. 1 overall to make the playoffs as a rookie.

And because there's a playoff berth at stake, Bradford calls this the biggest game he's played to date, even bigger than any of his high-profile contests at Oklahoma.

"We're talking about the NFL now," he said. "It's a shot to make the NFL playoffs, which growing up is what you dream about. You dream about playing in the playoffs and making it to the Super Bowl. So the fact that we have an opportunity to make it to the playoffs in my first year, I think it's awesome. I'm really looking forward to this opportunity."

Sign up for our free XFL/NFL Watch newsletter, tackling the news and updates you need to keep up with the latest from the St. Louis Battlehawks and the NFL.

Our panel sees parts of Aikman, Montana, Ryan and Manning

A debut for the books

Goldberg has settled in at right guard

Versatile lineman is about to finish first full season as starter.

December 26, 2010 -- Rams quarterback Sam Bradford and backup quarterback A.J. Feeley optimistically signal for the touchdown as a Danario Alexander catch is reviewed in fourth quarter action during a game between the St. Louis Rams and the San Francisco 49ers at the Edward Jones Dome in St. Louis, Mo. The initial ruling of a touchdown was reversed as Alexander stepped out of bounds, but the Rams scored on the ensuing play. Chris Lee clee@post-dispatch.com