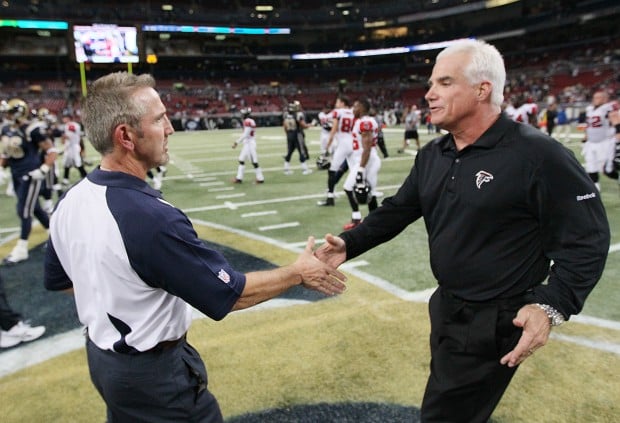 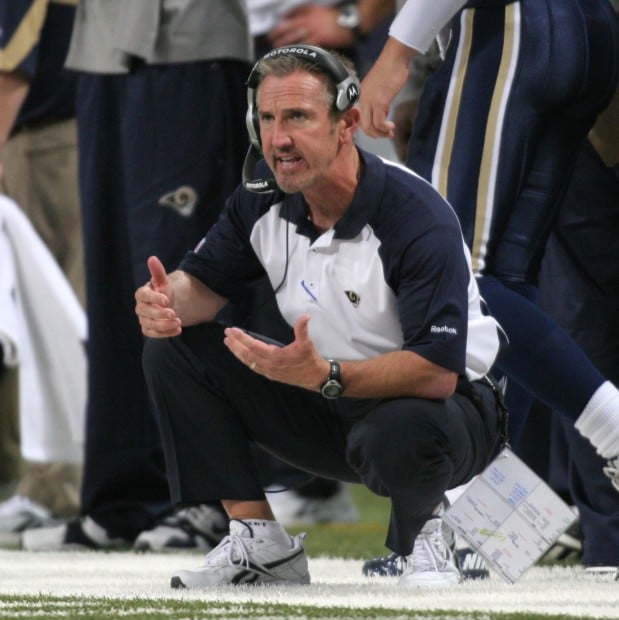 November 21, 2010 -- Rams head coach Steve Spagnuolo on the sidelines during a game between the St. Louis Rams and the Atlanta Falcons at the Edward Jones Dome in St. Louis, Mo. (Chris Lee clee@post-dispatch.com)
BY BERNIE MIKLASZ, Post-Dispatch Sports Columnist

After the Rams lost to the Atlanta Falcons, I wrote about the obvious talent gap between the teams. And noted that the Falcons came to St. Louis and provided a shot of reality. I listed a few of the Rams' roster needs. I talked about a couple of areas of immediate concern, namely the sluggish running game and their tiring defense.

The reaction to the column was interesting.

Some fans believed I was too hard on the Rams. They're still rebuilding, I was told. They've made good progress. We didn't expect them to win much this season, and they're 4-6 and a game out of first place in the NFC West. So let's not demand too much from them. Let's understand that it's a young team that has to find its way.

Not to the column — but to the loss to the Falcons.

Spagnuolo was angry. He wouldn't accept the loss. He didn't attempt to rationalize it.

Spags made it clear that he expects more from his team. And that he believes the players have it in them to do it.

"I think this team has reached the point where we're capable of beating those teams," Spagnuolo said. "I feel that way, and I know (the players) do too. So the better you become, the more in the thick of it you get. You know the higher the aspirations, I guess the more upset I get when you don't win. Not that I ever accept any loss."

I like that. You go, Spags. But take it up a few notches.

I believe it's the perfect message for his team. The last thing these players should be hearing is that they're young, a year away, they're rebuilding, they aren't ready to win, they can't do it, etc. The worst thing the Rams can do is listen to enablers.

And if you are confused by any of this, you shouldn't be.

Yes, it is possible to have it both ways.

We can take note of the Rams' progress. We can be cautiously optimistic over the future. We can be appreciative of the new players that they've added who are turning the franchise around. We can agree that it was a dandy surprise to see the Rams at 4-4 and tied for first place two weeks ago. We can also sign off on the premise that the Rams' best days are most likely in the future.

That doesn't mean we should wave off losses now. The 2010 season isn't a school project. There are no "A" grades for effort. There are no "attaboys" for losing games that should have been placed safely in the win column. The kind of games that the Rams absolutely gave away at Tampa Bay and San Francisco.

I don't want to hear that the Rams weren't ready to win those games. What does that mean, anyway? They dominated Tampa Bay in the first half. They just pushed the Buccaneers around. The Rams had San Francisco beaten, too.

All the Rams needed to secure a win at Tampa Bay was find a way to score three lousy points in the second half. In San Francisco, it came down to one play: stopping the 49ers on a fourth and 18 play. If the same St. Louis roster was good enough to slap Tampa Bay around and take control at San Francisco, then the same roster was capable of making one stinking play to win a football game.

In the National Football League, you either get it done, or you go home in January. And why should the Rams resign themselves to going home?

The Rams still have an opportunity here. The NFC West is horrible. The Rams trail the Seattle Seahawks by a game in the standings. Are the Rams flawed? Yes. Are there roster holes and gaps in talent? Plenty. We've discussed that already.

But have you taken a look around the NFC West?

Seattle (5-5) has a long list of injuries and the Seahawks defense has been plundered for at least 475 yards in three of the last four games. Running back Marshawn Lynch — supposed to make a difference after being acquired from Buffalo last month — is averaging 3.1 yards per carry and was benched at New Orleans on Sunday after losing two fumbles and dropping two passes.

Arizona (3-7) has lost five consecutive games for the first time since 2006. The Cardinals don't have a winning quarterback. Veteran safety Adrian Wilson, the team leader, is complaining about the young Cardinals, and how they refuse to listen to advice.

San Francisco (3-7) has an unstable head coach in Mike Singletary. The 49ers just got shut out at home (by Tampa Bay) for the first time since 1977.

So please explain: given the level of competition in the NFC West, why would anyone baby the Rams, shrug away losses, or take the position that the team isn't good enough to get it done now? That makes no sense to me. Frankly, I respect these players more than that.

Please tell me why the Rams can't go to Denver and get a win over the dysfunctional, 3-7 Broncos. I'm not saying the Rams will win at Denver, but why are so many people portraying this game as if it's some impossible mountain to climb? Are you kidding me? And why would anyone decide that a loss at Arizona on Dec. 5 is inevitable? That's wacko.

The Rams are much better than they were in 2009. And with that comes a shifting of expectations. And to that end, Spagnuolo speaks the truth when he voices his refusal to accept losing.

Late last month pundits ridiculed Tampa Bay coach Raheem Morris for saying that his Buccaneers were the best team in the NFC. I don't think the Buccaneers are the best team. But they are 7-3. And that's impressive. Do you really believe Tampa Bay — as compared to the Rams — is loaded with talent? Please. But the players believe they're good, in part because the coach is constantly reinforcing his belief in them. Morris will not permit his players to sell themselves short. And that's commendable.

"That's a mentality we set up for these guys," Morris told the Tampa Bay media. "It's like it is with your kids — when you send them out into the world or to do whatever it is they're going to do in this competition in sports or in school or whatever, you tell them to go be their best. And that's what I'm telling my guys. I tell them, there's no reason we can't be the best. It's always a mentality before it's a reality and we're setting our mentality up to be the very best."

If anything, Spagnuolo should come out stronger than he has.

In this instance, bold is better.

With the Rams facing three consecutive road games, Spags should make a huge deal about winning on the road. He should challenge his players to make it happen. Appeal to their pride, their competitiveness. By downplaying or finessing the Rams' road-worrier problem, Spags will only surrender to weakness and risk eroding his team's confidence.

It's encouraging to see the coach adjusting the Rams' attitude. But don't tweak it, Coach. Transform it.

Don't allow your team's immediate ambitions to be drained by excuse-making enablers.

Give 'em a reason to believe, Spags.

Lloyd's turnaround could cause trouble for Rams

Broncos receiver has over 1,000 reception yards and averages 19 per catch.

Burwell: Frerotte gets to be coach and dad

Jets certainly have gotten excellent value from Smith after drafting him in 4th round.

Historically, rookies have accuracy issues, but Rams QB is moving up in the rankings.

90 things to love about The Man

November 21, 2010 -- Rams head coach Steve Spagnuolo on the sidelines during a game between the St. Louis Rams and the Atlanta Falcons at the Edward Jones Dome in St. Louis, Mo. (Chris Lee clee@post-dispatch.com)
© Copyright 2021 STLtoday.com, 901 N. 10th St. St. Louis, MO | Terms of Use | Privacy Policy
Powered by BLOX Content Management System from TownNews.com.
You don't have any notifications.