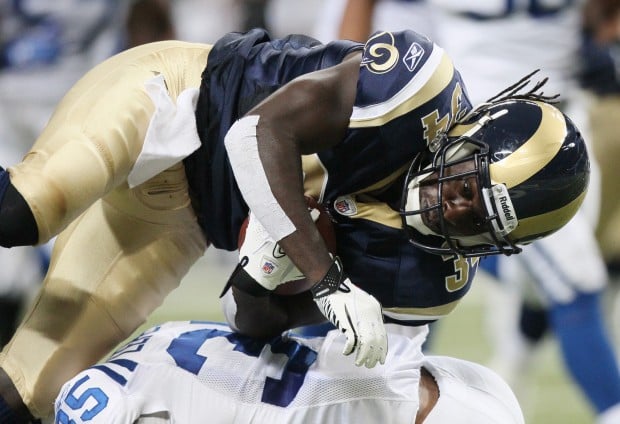 August 13, 2011 -- Rams running back Jerious Norwood is tackled at the end of a 17-yard run in second quarter action during a preseason game between the St. Louis Rams and the Indianapolis Colts at the Edward Jones Dome in St. Louis, Mo. Chris Lee clee@post-dispatch.com 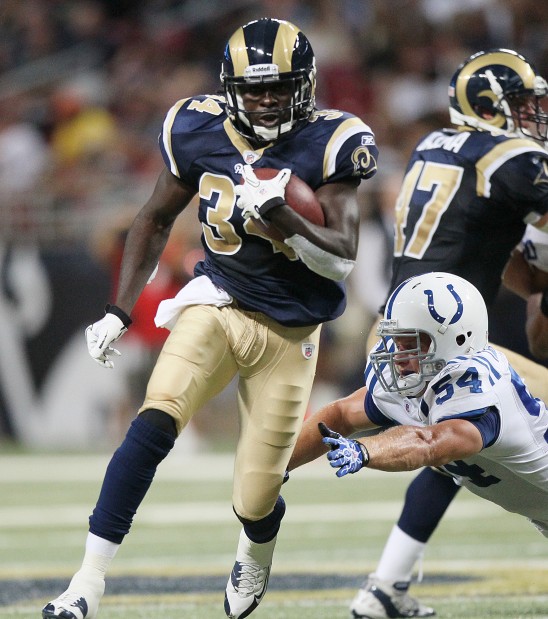 August 13, 2011 -- Rams running back Jerious Norwood (left) eludes a tackle by Indianapolis linebacker Nate Triplett enroute to a 17-yard run in second quarter action during a preseason game between the St. Louis Rams and the Indianapolis Colts at the Edward Jones Dome in St. Louis, Mo. Chris Lee clee@post-dispatch.com

After several seasons of searching for a capable backup to running back Steven Jackson, the Rams dipped into the free-agent pool to scoop up Cadillac Williams and Jerious Norwood.

During Saturday night's 33-10 preseason win over Indianapolis, both showed signs of the flair the Rams' brass hope they can bring to complement Jackson.

But Keith Toston, who made the team last year as an undrafted rookie from Oklahoma State, also sent a message:

Hey, don't forget about me.

Toston rushed for a game-high 64 yards on 11 carries, including a 5-yard touchdown burst up the middle on which he carried several defenders into the end zone.

Williams had 40 yards on 11 carries, with a 1-yard TD. Norwood added 37 yards on eight attempts as the Rams pounded out 169 yards on the ground, averaging a solid 4.1 yards per carry.

And Jackson spent the entire evening on the sideline.

"We have some great backs," said guard Harvey Dahl, another free agent pickup. "It's going to be exciting to block for them."

Williams was brought in as the front-runner to understudy Jackson, and he did nothing Saturday to damage his chances to earn that job. "He hit some seams, kept some drives going," coach Steve Spagnuolo said.

The 5-11, 209-pound Norwood, 28, came into the league in 2006 out of Mississippi State as a third-round draft choice by Atlanta. In five seasons with the Falcons, he racked up 1,995 rushing yards and averaged a gaudy 5.3 yards per carry. He appeared in just two games last year before suffering a knee injury.

"I feel like it went pretty good" vs. the Colts, Norwood said. "I felt like I could've done better on certain plays. We've still got a long way to go, got a lot to learn. So we'll just keep working hard."

The competition behind Jackson is in capable hands, Norwood pointed out.

"It's always good to have backs that can go in and get the job done," he said. "Regardless of who's in there, the coach depends on us to handle the business on the field and just do the best that we can."

Toston played in all 16 games last season, performing mainly as the third back behind Jackson and the since-departed Kenneth Darby. He got just 19 carries and 54 yards.

Still, Toston is hardly ready to offer a concession.

"Just playing my game," he said. "When I get an opportunity to get in there, I'm going to do everything I do every day at practice - just hit the holes that they give me and just try to make plays."

It was an encouraging start, but not one without its flaws, Toston added.

"I feel I did pretty good today," he said. "I missed a couple of holes on a couple of plays, so I feel I can do a little better."

Toston's touchdown completed a nine-play, 73-yard drive that expanded the Rams lead to 30-3 with 9 minutes, 38 seconds left in the third quarter. Toston carried six times for 35 yards and caught an 8-yard pass during the march.

The arrival of Williams and Norwood hasn't changed his approach, Toston insisted.

"One thing about me, I'm a great teammate," he said. "You can go get whoever, and I'm going to treat them just like a brother. Whoever gets the job, gets the job. And live with it."

Besides, Toston added, he's been in similar situations before.

"Since college I've been under a lot of pressure, been in situations where I've been the No. 2 back and had guys who came from different jucos that were All-Americans and just put pressure on me," he said. "But I just get in there and play my game."

Rams give Colts an opening jolt

Kick is his longest, but it won't be a team record.

August 13, 2011 -- Rams running back Jerious Norwood is tackled at the end of a 17-yard run in second quarter action during a preseason game between the St. Louis Rams and the Indianapolis Colts at the Edward Jones Dome in St. Louis, Mo. Chris Lee clee@post-dispatch.com

August 13, 2011 -- Rams running back Jerious Norwood (left) eludes a tackle by Indianapolis linebacker Nate Triplett enroute to a 17-yard run in second quarter action during a preseason game between the St. Louis Rams and the Indianapolis Colts at the Edward Jones Dome in St. Louis, Mo. Chris Lee clee@post-dispatch.com