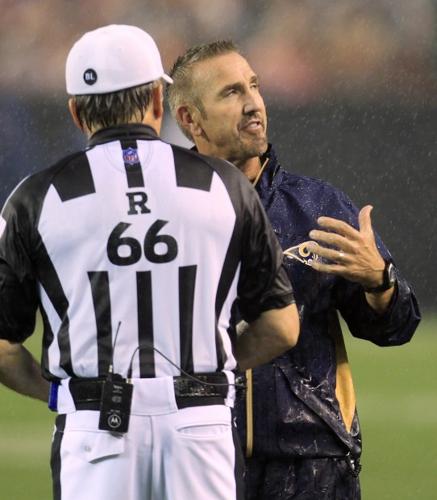 Quarterback Sam Bradford could be in the starting lineup a few weeks ahead of schedule. A.J. Feeley experienced swelling in his right thumb Sunday, casting doubt on his ability to play in Thursday's preseason game at New England.

"If A.J. can't go, Sam will start," coach Steve Spagnuolo said after the Rams' 19-17 preseason victory in Cleveland. "That makes sense. He'll get plenty of work (in practice)."

Spagnuolo said he wasn't sure whether Feeley would be able to practice this afternoon when the team returns to work after an off day Sunday.

"Hard for me to tell, to be honest with you," Spagnuolo said. "He'll want to (practice), knowing the kind of guy he is. He'll want to just tape it up and do it."

It is believed that Feeley has a sprained thumb, but partly because of the swelling, the team ordered up an MRI exam Sunday.

As he was following through on a third-down completion to Danny Amendola, Feeley was hit on this throwing arm by blitzing Cleveland linebacker Chris Gocong. Feeley experienced pain in both his thumb and elbow.

"He said to me it was kind of one of those 'funnybone' feelings (on the elbow), but he just couldn't get it to come back around," Spagnuolo said.

Feeley did finish out the final five plays of the drive, which culminated in a touchdown pass to Daniel Fells. But Bradford came out for the next series. X-rays taken at Cleveland Browns Stadium came back negative on Feeley's elbow and thumb.

But when Feeley visited with head athletic trainer Reggie Scott on Sunday back in St. Louis, Spagnuolo said Feeley was "pretty sore and swollen."

Even if it's "just" a sprain, the short work week makes it more difficult for Feeley to get back in the lineup against the Patriots. The Rams have only two practices this week — today and Tuesday — before heading to New England on Wednesday for the Thursday night game.

"We'll see," Spagnuolo said. "It is a quick turnaround, so you don't have the luxury of the two extra days (of practice)."

Feeley completed five of six passes on the touchdown drive, with two completions — including a 9-yard TD toss to Fells — coming after the injury.

"I figured if I gave it a little more time that the pain would go away," Feeley said. "We were lucky enough to get it in the end zone there a couple plays later, and it paid off."

Feeley likened playing in a heavy rainstorm to backyard football.

"You've just got to make the most of it," he said. "For us, there might be a situation in the year where we have to play in the same kind of weather. We've been there, done that."

Meanwhile, Bradford had better protection than he did a week ago against Minnesota, but he was less effective. In seven series with the offense, Bradford and the Rams managed only one first down — and that came via penalty.

"Obviously, I'd like to have had a couple more completions out there," Bradford said. "I felt like we struggled a little bit early. I felt like once I settled down, I made some smart decisions. I felt like for the most part, I was in the right place with the ball."

But Bradford, who threw 50 touchdown passes en route to a Heisman Trophy season at Oklahoma in 2008, expects better than that.

"I expect to be able to go out there and tear it up every time I step out on the field," Bradford said. "So any time you're not able to do that, it's a bit of a disappointment."

After getting sacked four times and hit on at least three other occasions against Minnesota, Bradford wasn't sacked against Cleveland.

"Pass protection was great," he said. "I think I only got hit one time. They actually brought a blitz that we couldn't pick up the time that I did get hit. So other than that our offensive line played great."

Bradford said he has had very little experience playing in rainy weather — only once previously in his career, he thought. So he tried to be extra careful with the center exchange and with the football in general.

"Obviously, the first thing we talked about when we knew we were going to be playing in the rain is just securing the initial exchange between the center and the quarterback — make sure we didn't have any balls on the ground," Bradford said.

"And other than that, you just have to be smart. You have to realize that you probably can't make all the throws that you usually can, especially with some of the throws down the field. So if it's not absolutely clean, you might have to hold onto it and look for the check-down."

"He was a little bit up and down," Spagnuolo said. "But Sam will be fine, he'll bounce back. I know he's probably already geared up to play in this next preseason game."

Danario Alexander and Sam Bradford were roommates at the NFL scouting combine.

The Rams whiffed on a bunch of tackles in the steady rain at Cleveland.

A week ago, they looked like total strangers as they experienced breakdown after breakdown.