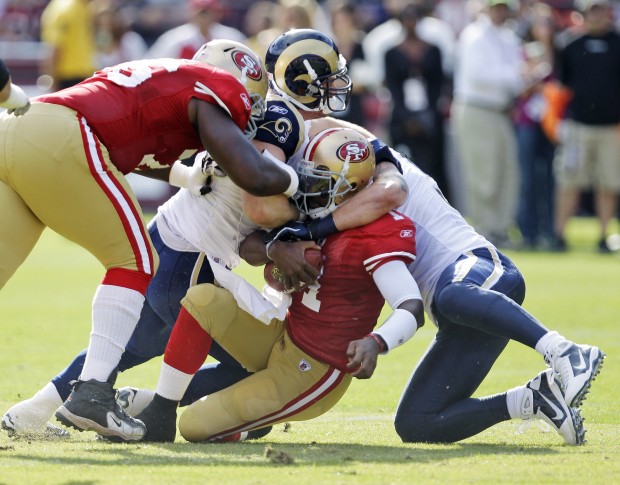 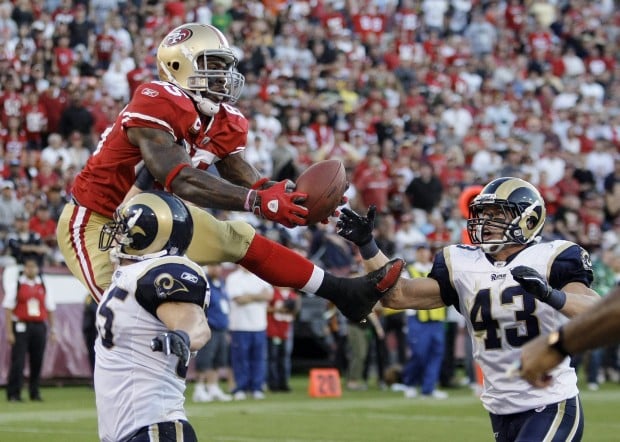 San Francisco 49ers tight end Vernon Davis grabs a pass in the end zone next to St. Louis Rams linebacker Jame Laurinaitis during the fourth quarterSunday. Davis' touchdown was called back due to a holding penalty. (AP Photo) SAN FRANCISCO - NOVEMBER 14: Steven Jackson #39 of the St. Louis Rams runs away from a diving Nate Clements #22 of the San Francisco 49ers at Candlestick Park on November 14, 2010 in San Francisco, California. (Photo by Ezra Shaw/Getty Images) SAN FRANCISCO • The Rams pushed and pushed, and pushed some more. If that elusive first road victory was a boulder, they had it at the top of the hill and could almost see the other side — the down hill side.

But once again, they slipped and got flattened by it. It's difficult to imagine any road loss being more wrenching than the 18-17 loss at Tampa Bay three weeks ago. But this was it, a 23-20 overtime defeat to San Francisco on Sunday at Candlestick Park.

"When you have a team, third-and-forever, fourth-and-forever, for them to convert it and come back and get a touchdown — that can't happen," cornerback Ron Bartell said.

It happened. The Rams led 17-13 in the closing minutes of regulation, but San Francisco wiggled out of third-and-32 and fourth-and-18 holes leading to a go-ahead touchdown catch by wide receiver Michael Crabtree with 2 minutes, 10 seconds to play.

Undaunted, the Rams drove 70 yards on their next possession, tying the score as time expired on Josh Brown's 33-yard field goal. Just four plays earlier Steven Jackson, who had 148 yards rushing and receiving, put the Rams in position to win the game in regulation managing to stay inbounds on a 25-yard catch with linebacker Takeo Spikes draped all over him.

But a couple of plays later, on a second-down play from the 49ers 15, tight end Daniel Fells dropped a pass at the Niners' 7 on a play he might have scored on. "I've got to come up with that catch," Fells said. "I take everything personal. I go out there and I bust my butt every single down, every single play, and I expect to make those plays so I can help my team win."

But it was one of those games where there were several plays like that, good and bad. And lots of questions.

Why, for example, did Kevin Dockery start ahead of Bradley Fletcher at cornerback? According to STATS LLC, only 49 percent of the passes directed at Fletcher had been completions this season.

"We've got a lot of competition in a lot of spots, to be honest," coach Steve Spagnuolo said, when asked about starting Dockery. "You know I'm of the thinking, the philosophy, that there should be competition all the way through. I think it makes guys play harder and better. So 'Dock' got his shot and we'll see where it goes for this coming week."

Dockery was replaced on the next series by Fletcher in the Rams' base defense, although he stayed in the game in other packages.

And more pertinent to the ending of the game, why did referee Ed Hochuli's crew call pass interference on safety Oshiomogho Atogwe in overtime, on a play that clearly looked like an uncatchable ball?

The Rams seemingly had San Francisco stopped on third-and-2 from the St. Louis 45. Defensive end Chris Long, who spent most of the day in the 49ers' backfield, was in the process of bringing down quarterback Troy Smith on the play.

Smith got the ball off, but it was a wobbly duck, destined to fall incomplete in the middle of the field, nowhere near a 49ers receiver. But as tight end Delanie Walker stopped and turned back to make an attempt for the ball, he collided with Atogwe, who was trailing in close coverage.

Out came the flag. Instead of punting from the 45 on fourth down, the Niners had a first down at St. Louis 23, already in field goal range. Two Frank Gore runs later, Joe Nedney kicked a 29-yard field goal with 9:39 to go in overtime for the victory, which boosted San Francisco's record to 3-6 after an 0-5 start.

Spagnuolo said he tried to get an explanation from the officiating crew on the call. "I asked, but it's noisy and I was screaming to ask," he said. "It was called."

Did he agree with the call?

"I'm not going to comment on that," Spagnuolo said. "You have to play the next down based on the way they officiate it, and that's what we did."

Attempts by the Post-Dispatch for a pool report on the call were unsuccessful.

Atogwe had left the locker room. But when Bartell was asked if he thought the pass was uncatchable, he replied, "Yeah, yeah. I thought a couple of the pass interference calls were questionable. At the end of the day you have to play above officiating. We still had opportunities to make plays and we didn't get it done."

Nope. Instead of putting a dagger in the 49ers' attempt to salvage their season, the Rams lost their fourth game the season by four points or fewer. Three of those tight losses have come on the road, where the Rams remain winless since Nov. 1, 2009.

"We're not the old Rams," Long said. "We're trying to be a new team and set a new standard. And the standard isn't losing close games on the road."

Steven Jackson was asked to explain the Rams' baffling and maddening inability to win on the road after Sunday's 23-20 loss to the 49ers. "I r…

Spagnuolo defends not using the blitz

SAN FRANCISCO — The Rams had some success blitzing Sunday, including a key sack by former 49er Michael Lewis late in the fourth quarter.

SAN FRANCISCO • In a game as big as any the Rams have played in several years, big plays rained down all around them Sunday at Candlestick Par…

San Francisco 49ers tight end Vernon Davis grabs a pass in the end zone next to St. Louis Rams linebacker Jame Laurinaitis during the fourth quarterSunday. Davis' touchdown was called back due to a holding penalty. (AP Photo)

SAN FRANCISCO - NOVEMBER 14: Steven Jackson #39 of the St. Louis Rams runs away from a diving Nate Clements #22 of the San Francisco 49ers at Candlestick Park on November 14, 2010 in San Francisco, California. (Photo by Ezra Shaw/Getty Images)