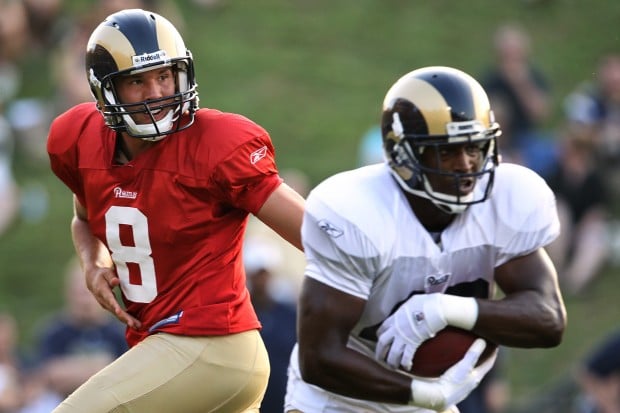 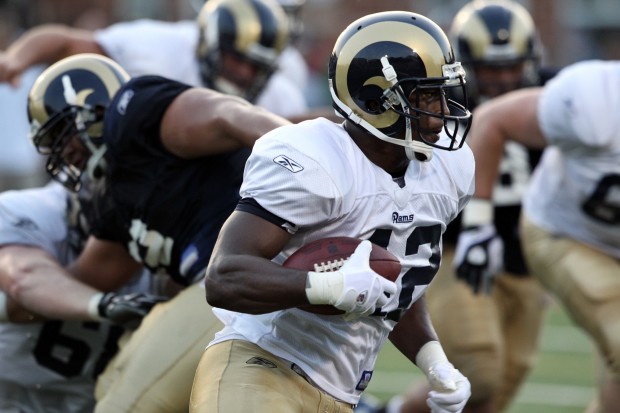 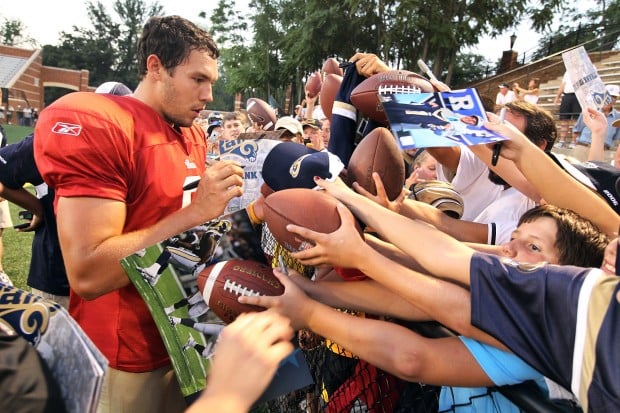 Naturally, the spotlight shone the brightest on No. 1 overall draft pick Sam Bradford on Saturday night at the Rams' only scheduled scrimmage of training camp. And the strapping quarterback didn't disappoint the more than 8,000 fans who jammed Harlen C. Hunter Stadium at Lindenwood University.

Bradford was smooth, sharp and productive. In the "live" tackling periods, he hit on nine of 12 passes for two touchdowns. He tacked on two more scoring tosses in non-tackling sessions.

Still, Bradford wasn't the only rookie getting his first inkling of how an NFL game-day atmosphere will feel.

"It felt good to get in a game situation and have the fans — have pretty much what's going to happen on Sundays," said tackle Rodger Saffold, a second-round draftee. "It's a way to come in and get started and figure out how we just have be fast but still be under control."

Wide receiver Brandon McRae, an undrafted rookie having a strong camp, said, "It was good to be out here with all these fans; they showed great support. It was really amazing ... a lot of fun."

Although Lindenwood is a short drive from the team's training complex in Earth City, where the first-year players have spent most of their waking hours over the past two weeks, the brief change of venue was a welcome respite.

"It just felt nice to be somewhere new," McRae said.

"I'd like to see the offense finish some of those goal-line plays and get in the end zone. You're never happy as a head coach when you drop balls or when you turn it over, and you're never really happy at all when you have those illegal-formation penalties. Those frustrate me the most. We've got to clean that up."

One of the good things was the 60-yard touchdown that McRae scored during a live period. The Mississippi State product got behind the defense, hauled in a pinpoint pass from second-year quarterback Keith Null and outraced cornerback Kevin Dockery to the end zone.

"It's been awhile," McRae said. "I've just got to keep on improving in certain places. ... But I'll take that any day."

Later, a 20-yard catch by the 6-foot-3, 207-pound McRae was nullified by a penalty. "He's a big wide receiver that's been making plays," Spagnuolo said. "He's a young guy who's got a lot to learn. But he's done some good things."

Saffold manned the all-important left-tackle spot with the first-team offense without incident. Defensive end George Selvie, a seventh-round selection, recorded two sacks. And cornerback Jerome Murphy, a third-rounder, was one of the most productive tacklers.

"It felt good to hit again," Murphy said. "We have some situations in practice when we go live, so we get a little bit of hitting. But you get more of it (in the scrimmage), so you get that feeling back."

For the rookies, the scrimmage was a step forward in the long march toward the regular season. Next up is the four-game preseason schedule, which kicks off Saturday night when the Rams face Minnesota at the Edward Jones Dome.

"It was a blast out here — the first time I've gotten to do this in a long time," Bradford said. "To have all these fans out here and to go through a game situation definitely gave us a little bit of preparation for next week.

"And I'm sure those four preseason games will get us ready for the regular season."

For the Rams, that begins Sept. 12 when Arizona comes to town.

Sign up for our free XFL/NFL Watch newsletter, tackling the news and updates you need to keep up with the latest from the St. Louis Battlehawks and the NFL.

If the overflow crowd estimated at 8,000 came to see No. 1 overall pick Sam Bradford, then they had to like what they saw.

Training camp practices are open to the public at Rams Park in Earth City.