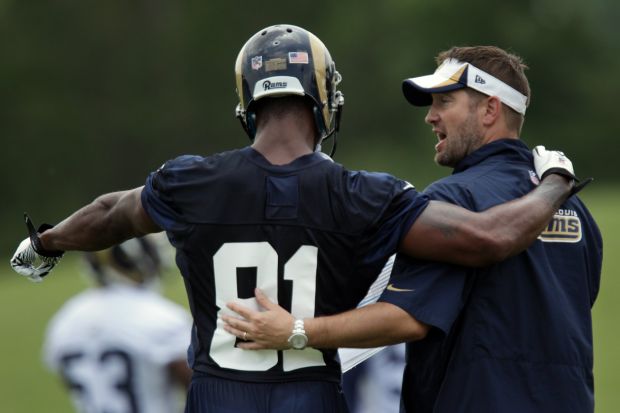 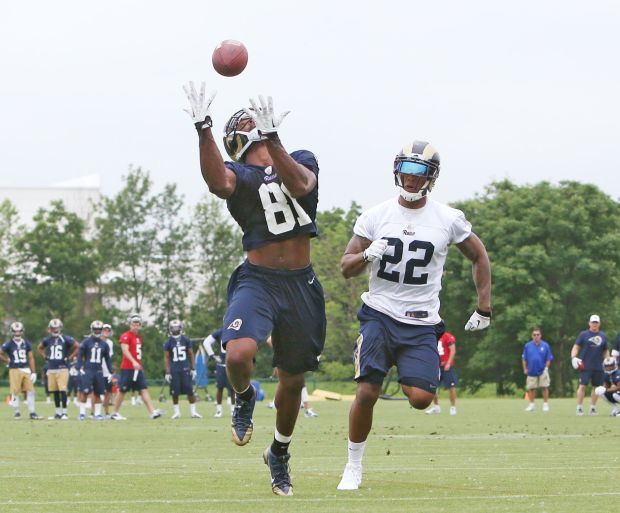 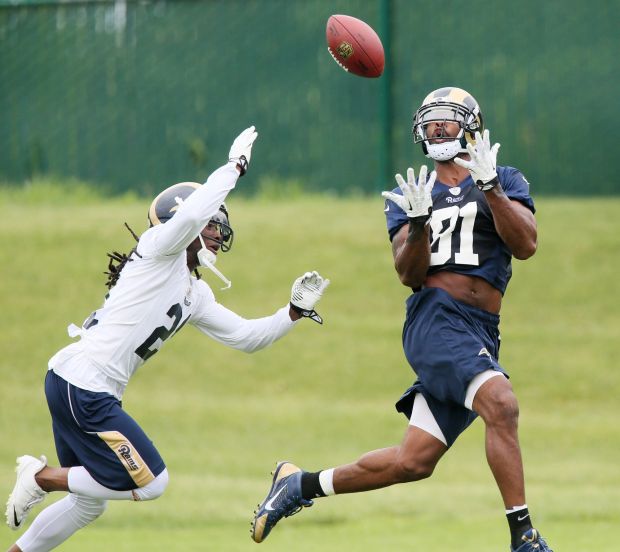 If anyone ever needed a fresh start, it’s new Rams wide receiver Kenny Britt. His five star-crossed seasons in Tennessee were a mix of off-field issues, injuries and flashes of big-play potential.

But as the Rams begin the second week of the spring practices known as OTAs, Britt is all smiles.

With that in mind, Week 1 of OTAs represented a very good start for the former Rutgers University star. Last Thursday, Britt caught two long touchdown passes, including one where he got behind cornerback Trumaine Johnson for the score.

He let Johnson know about it with some loud but largely unintelligible trash-talking afterward. That led to a scuffle later in practice. In Friday’s practice there was some chirping between the two but nothing more.

“He’s a very emotional kid,” coach Jeff Fisher said. “He’s an emotional receiver. He looks the part, and he can make the plays. I was really happy to see him come on (board).

“Kept himself in really good shape during the free agency period. Came in and has done a great job. He’s had no setbacks, he feels great physically. So he can potentially return to where he was a very productive receiver.”

Britt’s chiseled frame (6-3, 223 pounds) has already earned him the nickname “Incredible Hulk” from some of his new teammates. His competitive, high-energy style can’t hurt a young wide receiver corps that is still finding its way.

“I think just watching him and the energy that he comes onto the field with every day has been great. Not only for the offense, but for that wide receiving corps in general. I just feel like he brings kind of a presence and an energy that maybe hasn’t been there in the past.”

The biggest question involving Britt remains: Can he stay out of his own way off the field?

A sampling of recent off-field woes include:

• An April 2011 arrest in New Jersey (he’s from Bayonne) following a car chase with police. He was cited for careless driving and fined.

• He was suspended for the first game of the 2012 season after an arrest that summer for suspicion of DUI.

• In January 2013, he was questioned but not implicated when a close friend was involved in a stabbing.

Depending on which account you read from his time in Tennessee, Britt has been involved in eight or nine incidents with police since being drafted in the first round, No. 30 overall, by Fisher’s Titans in 2009.

Little more than five weeks after signing with the Rams came an embarrassing incident. Namely, video on Britt’s Instagram account of a couple having sexual intercourse.

Luckily for Britt, the drafting of Michael Sam on the same day the Britt video surfaced grabbed the media attention.

He then added: “If we’re not talking about getting better and making this team better, I don’t want to talk about it.”

It’s uncertain if Fisher disciplined Britt for the video. But it’s clear that Fisher was comfortable about bringing Britt to St. Louis despite the off-field issues in Tennessee.

“It wasn’t difficult at all,” Fisher said. “I stayed in touch with Kenny my year off while he was rehabbing (from knee surgery). We spent some time together and I tried to help him get some things behind him. And he did. He’s got everything straightened out now.”

For his part, Britt appreciates the fact that Fisher has tried to help him overcome past missteps and has never turned his back.

“He’s one of the coaches I’ll follow anywhere,” Britt said. “I’ll run through a brick wall for the guy. He’s a player’s coach. He gets it. There’s things that happen around your life, and some people will cut you off.”

But some people, Britt said in reference to Fisher, will “just open their arms a little bit wider and let you know they’re by your side.”

So Britt is all smiles — and it’s a wide, beaming one — in his early days in St. Louis. The plan is to regain some semblance of the form he displayed early in his Tennessee career, when he averaged 42 catches, 736 yards, six TDs, and 17.6 yards per catch over the 2009 and 2010 seasons.

But then came the injuries. He lost four games in 2010 with a hamstring injury and then missed 13 games in 2011 with a knee injury.

“I’m just trying to get back to where I was before,” he said. “I’m feeling healthy. I’m feeling strong.”

Britt knew his time was over in Tennessee long before the start of the 2013 regular season.

“I’d say the second week of camp when they said they’re gonna bench me for not blocking,” Britt said. “I’m talking about training camp. But that’s something in the past that we don’t have to worry about, because — you know what? — I’m a St. Louis Ram.”

Britt, still only 25, brings the promise of a big, physical, competitive receiver to St. Louis.

“They’re moving me all over, so I’m excited, he said.

Highly decorated offensive lineman from Alabama spent the offseason transforming his body and looks to compete for playing time.

Rams Talk: Fans sound off about the 2015 season

Burwell: 5 summer questions about the Rams

All signs this week indicated that Bradford will be ready when training camp opens July 24.

Rams notes: Brodine working to make the switch from DL to TE

After two seasons on the practice squad, Brodine is battling for the spot vacated when Kirkwood's Mike McNeill signed with the Carolina Panthers.

For now at least, a sense of normalcy is setting in on Sam's quest to make Rams roster.

Quarterback rehabbing from knee surgery generally was on target during Friday's OTA session.

Burwell video: Sam Bradford is back on the field

On today's Upon Further Review, the Post-Dispatch's Bryan Burwell reports from Rams Park, where quarterback Sam Bradford is easing back into …

Fisher and Snead told quarterback they weren't drafting Johnny Football. 'I pretty much knew what was gonna happen,' Bradford said.