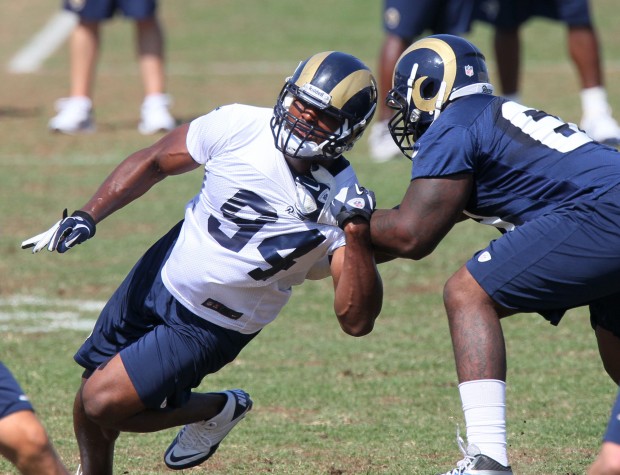 Quinn Ojinnaka (right) drags down Robert Quinn during a minicamp drill in June. Ojinnaka was released Monday by the Rams. (Photo by Chris Lee / Post-Dispatch) 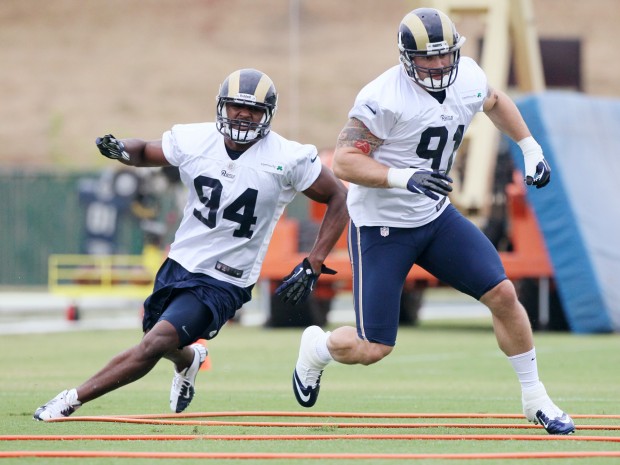 Rams defensive ends Robert Quinn (94) and Chris Long will be up against struggling tackles when they face Arizona tonight. (Photo by Chris Lee / clee@post-dispatch.com)

As all the extreme wide-bodied and thick-necked giants assembled on the far corner of the Rams Park practice field on Tuesday afternoon, it was easy to see how much defensive end Robert Quinn sticks out in a crowd.

In a flock of extremely oversized defensive linemen that coach Jeff Fisher loves to collect, Quinn sticks out like a gazelle among the rhinos and elephants. An extremely big gazelle (6-foot-4, 264 pounds), but a gazelle nonetheless. He is cut like a well-muscled inverted triangle, wide shoulders spreading out forever, but everything quickly tapering down to these long, bowlegged sprinter's legs. All around him are 300-pound big bodies, stomping and pounding and rumbling along with sheer power and strength. But there is last year's first-round pick pawing the ground in a three-point stance like Usain Bolt ready to explode out of the starting blocks.

For now, this is how Quinn sticks out in the crowd. In time, if things go according to plans, the Rams are counting on him to stick out for far more significant reasons. Last year, he showed flashes of his pass rushing potential with five sacks in a part-time role. This year, the expectations are much higher. They are hoping he turns into a fierce double-digit sack artist to go in tandem with Chris Long and turns the Rams defensive line into one of the main strengths of this team.

Quinn has been impossible to miss in the first weeks of camp. He seems to flash across your eyes in every pass rushing drill like a blur. In 11-on-11 drills, every time you see the flash of white jersey slashing around the edge on the pass rush right into the lap of nearly every quarterback before they can cock their throwing arm, it seems to be No. 94. He has burst past every offensive lineman put in front of him. On the rare occasion that he does not get into the backfield, there's another familiar scene.

Someone has tugged on Quinn's jersey, almost yanking it off his shoulder pads and nearly hauling him to the ground out of a sense of desperate survival.

Ask Jeff Fisher if he's noticing the same thing, and he grins as if you're handing out free money. "Yeah, and I'm kinda hoping that sort of thing carries over into the games, too," the head coach said after Tuesday's practice. "It kind of reminds me a little bit — and you might think I'm crazy about the comparison — but it's a little bit like (Tennessee Titans Pro Bowl running back) Chris Johnson's rookie year in training camp where you kept saying, 'Gosh, if this was a game do you think he'd score on that?' Well now it's like, 'Boy if this was a game, he'd have a few sacks by the time the game's over, right?'"

In one particular pass rush drill on Tuesday afternoon when defensive line coach Mike Waufle and assistant line coach Clyde Simmons had the big boys weave through four heavy bags then sprint to a fifth bag that was supposed to be the quarterback, if you closed your eyes, you'd still know when it was Quinn's turn just by the sound.

There were all these 280- and 300-pound monsters thumping their way around the tackling dummies with violent, heavy-handed, teeth-rattling open-palmed swings that sent the bags bouncing hard off the ground.

From 15 yards away, you could hear and feel the impact of these blows vibrating. It was the sound and fury of sheer power of very large, very physical men pounding the daylights out of the bags with anger and unadulterated violence.

Then it was Quinn's turn.

It was the sound of a saber slicing through the air. He was whacking the same bags with his long arms extended to his full 82-inch wingspan. But when Quinn delivered his blows, they were lightning-quick strikes that created a different disturbance. It was the difference between a fat guy doing a cannon ball into the pool and an Olympic diver slicing into the water barely creating a ripple.

He flashed a wide, self-satisfied smile when someone brought that up to him.

"It's all about speed," he said. "Moving fast. Moving quick."

Sitting under a misting tent after practice, Quinn was surprised when told how impressive his practice had been. "To be honest with you, I thought I had an awful practice," he said. "But that's how I always am. I try to think that every day is going to be the best practice I ever had, but I'm so hard on myself and I end up focusing on all the things I think I did wrong. It's always good to focus on the things you did well in practice, but for me to become a better player, I tend to focus in on the negative, things I can correct to become a better player. So for me, I concentrate on the things you did well and keep on trying to perfect those, and work on the bad things and try to improve those."

Ask him if he has a goal to hit double digits in sacks, and he quickly shakes his head. Instead he tells you about trying to become a complete player, better on the run, being able to shove an offensive lineman back five yards every play and disrupt a play by sheer force. "That's what Coach Waufle keeps emphasizing every day to us," he said. "He wants me to be able to do everything and that's what I want to do."

And when it comes to the thing he does best, which is getting after the quarterback, Quinn says he'll be counting sack totals this year, just not the ones you expect. "I really don't have a personal goal," he said. "But Coach Waufle has been saying since Day 1, 'Break the NFL record for most (team) sacks.' So I am more concerned with that and if you look at the talent we have on defense with all our linemen, I think we can do it. If we as a team break that record, that's what I will be satisfied with, not the individual stuff. This year is totally different than last year. We're looking at the big picture."

And the big picture means that if Quinn, Long, Michael Brockers, Kendall Langford and all the other linemen are even remotely close to chasing the 1984 Chicago Bears record of 72 sacks as a team, then the big picture ought to mean a huge improvement for the Rams.

Bradford happy to have position coach

Click the headline, submit your questions for the Post-Dispatch football writer

Get our Rams Update e-newsletter

Quinn Ojinnaka (right) drags down Robert Quinn during a minicamp drill in June. Ojinnaka was released Monday by the Rams. (Photo by Chris Lee / Post-Dispatch)

Rams defensive ends Robert Quinn (94) and Chris Long will be up against struggling tackles when they face Arizona tonight. (Photo by Chris Lee / clee@post-dispatch.com)