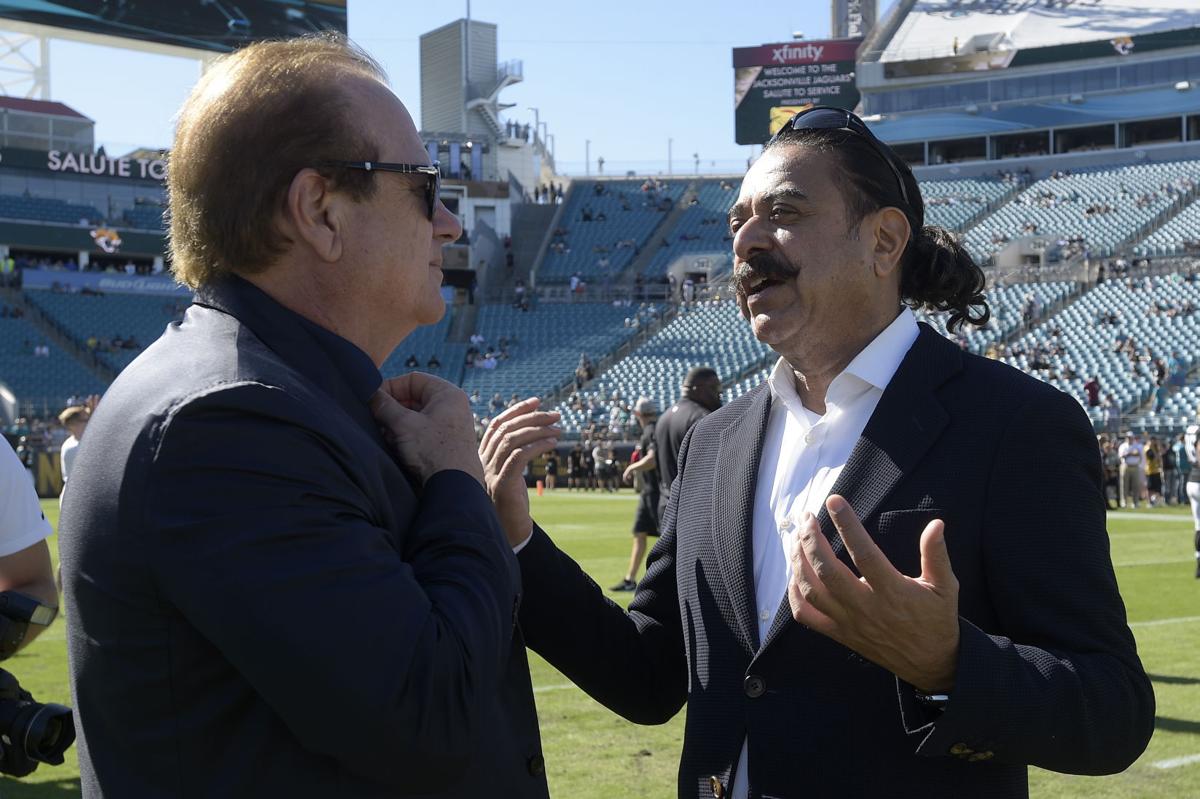 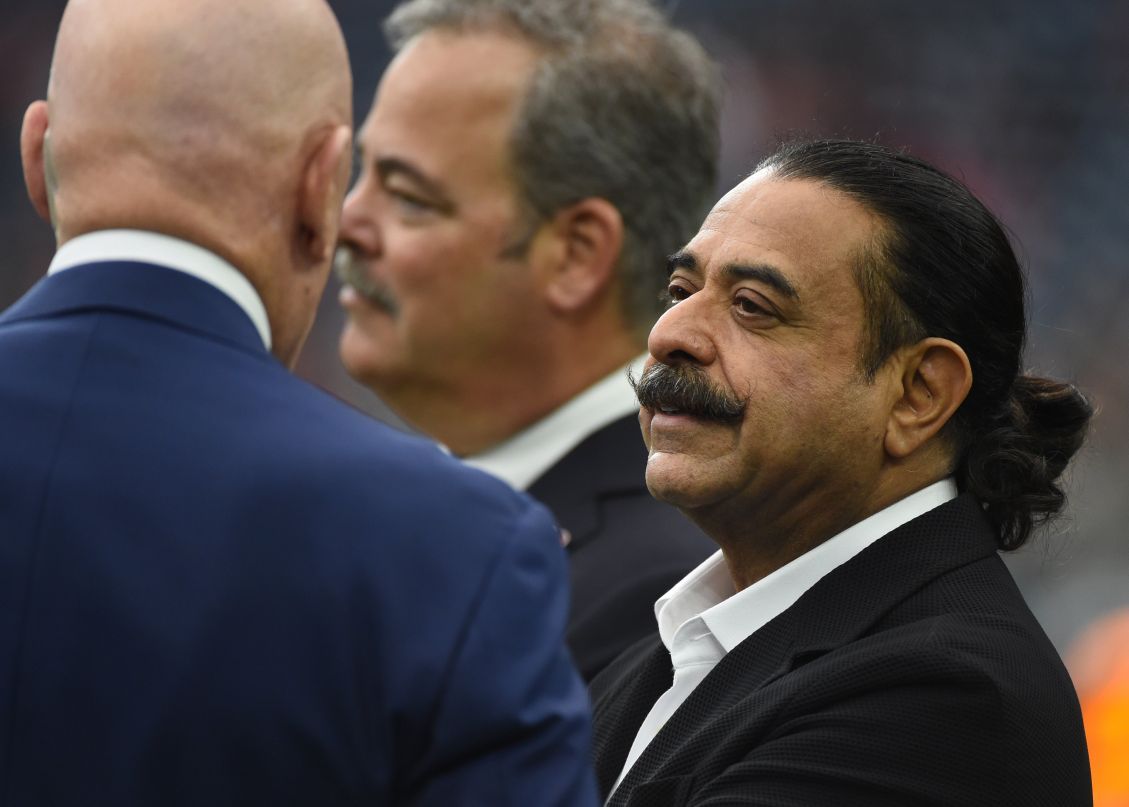 The Rams are gone. Mark Davis continues to insist he’s not interested in moving his Oakland Raiders to St. Louis.

So what about Jacksonville?

A small market that struggles to fill seats. Currently plays a game a year in London to help generate revenue. And owned by Shahid Khan. You know, the central Illinois businessman who unsuccessfully bid to purchase the Rams in 2010.

With the St. Louis market currently vacant as a result of Tuesday’s relocation vote by NFL owners, would Khan be interested in bringing his Jaguars to the Gateway City?

He spoke just before midnight Tuesday in the lobby of the Houston hotel, where just a few hours earlier NFL owners decided to spurn St. Louis and let the Rams move to Los Angeles.

Khan’s flirtation with St. Louis 5½ years ago came to an end when Rams owner Stan Kroenke exercised matching rights to purchase controlling interest in the team. But in his comments Tuesday, Khan sounded almost as if St. Louis was an old girlfriend and he was now happily married — to Jacksonville.

“For me, I think (St. Louis) was something that happened, and life changed, and you moved on,” Khan said of his ill-fated Rams bid. “For me, there was a time, there was a place. But you learn from history and you look forward. It wasn’t meant to be in St. Louis.”

But not long after that attempt to own an NFL team failed, Khan heard from the league.

“We know you’re not happy with how things turned out, but let’s kind of help you,” is how Khan characterized the league’s approach.

Little more than a year later, Khan became owner of the Jacksonville Jaguars.

Losing out to Kroenke on the Rams “wasn’t the result I was looking for,” Khan said. “But things turned out great for me, quite frankly. To end up in Jacksonville, own 100 percent of the team. ...”

Khan has since gotten to know Kroenke better and says he respects him. But is Kroenke the right guy to bring NFL football back to Los Angeles — a market that demands not only success but glitz from its sports franchises?

“I think he’s a very competent businessman,” Khan said. “I think he’ll be very successful. But I think he’s the kind of guy who would be successful wherever he chose to be.”

As for St. Louis’ attempt to keep the Rams with a $1.1 billion riverfront stadium plan, Khan lauded the efforts of the local task force.

“I was really impressed with the kind of job Dave Peacock did,” Khan said. “I think he really represented St. Louis and maybe Missouri at its finest. So if you’re a football fan in St. Louis, hats off to Dave Peacock.

“As just an observer, what St. Louis and Missouri did was far, far better than not doing anything. And who are we to judge, but I think you look at the result, it fell a little bit short. That’s far better to have tried and maybe not succeeded than not tried at all.”

Even so, Khan expressed some of the same concerns over the St. Louis market as Kroenke did in the Rams’ relocation application. Minus the vitriol.

“It’s a different era there, and different age,” Khan said. “If you look at the big picture, the world’s changing. Obviously St. Louis has changed.

“I mean I lived not too far from St. Louis for many, many years. Just think about what St. Louis used to be. One of the big hubs of TWA and American (airlines). You know, Ralston Purina. Monsanto. Anheuser-Busch.”

Khan’s Flex-N-Gate automotive parts plant in Champaign-Urbana, Ill., has helped make him one of country’s richest men, with a net worth of $5.3 billion, according to Forbes.

His business made him very familiar with St. Louis over the years.

“I remember we had the Ford Explorer plant (in St. Louis) — gone,” Khan said. “The Chrysler minivan plant — gone. We still have the GM plant. ... It used to be a huge automotive center. It changed.

Once the St. Louis task force was formed, it became apparent early on that the Rams would attack the level of corporate support and the potential for future corporate growth in St. Louis in building a case to relocate.

Judging by the result of Tuesday’s final vote, 30-2 in favor of Rams relocation, that argument must have resonated with league owners.

So what should St. Louis do about its NFL future? The first question that needs to be asked, Khan said, is does the NFL make sense for the region?

“I think that’s what you have to ask yourself,” he said. “Because if it is a smaller market, it has to be a private-public partnership. And it has to make sense for everybody.”

With a laugh, he added: “It takes two to tango. And you have to have the will and the desire to try and make it work.”

Obviously, Kroenke didn’t want to tango. And it looks like Khan and the Jaguars won’t be a dance partner for St. Louis, either. Certainly not in the near future, anyway.

If Khan indeed develops wandering eyes, many observers feel his first choice would be London. If and when London no longer becomes an option, then Khan might turn his attention to St. Louis. At least that’s how the thinking goes.

And even then, the St. Louis Jaguars may be wishful thinking. Khan appears to be establishing roots in Jacksonville, investing money both in the community and in his product. For example, as ESPN in Jacksonville pointed out, Khan is in the process of spending $76 million of his own money on improvements at city-owned EverBank Field.

That doesn’t sound like something an owner would do if planning an imminent relocation.

Hochman: Time for St. Louis to rise and shine

We can’t let the Rams leaving define us. We can’t be a sad sack of a city, it’s a bad look. We are still St. Louis, and we are an authentic sports town.

BenFred: After Rams ripoff, STL should rethink importance of NFL

Now we know how the NFL really feels about St. Louis, and that should never be forgotten as the city sorts out its football future.

Area leaders contemplate what comes next, the day after NFL owners voted to let Kroenke pack up the Rams and move to LA.

Kroenke, the 'victim'? That's the story he's telling in LA

He tells LA Times: 'I never dreamed I’d be in this position (of moving the Rams). But at the same time, you’re not going to sit there and be a victim.'