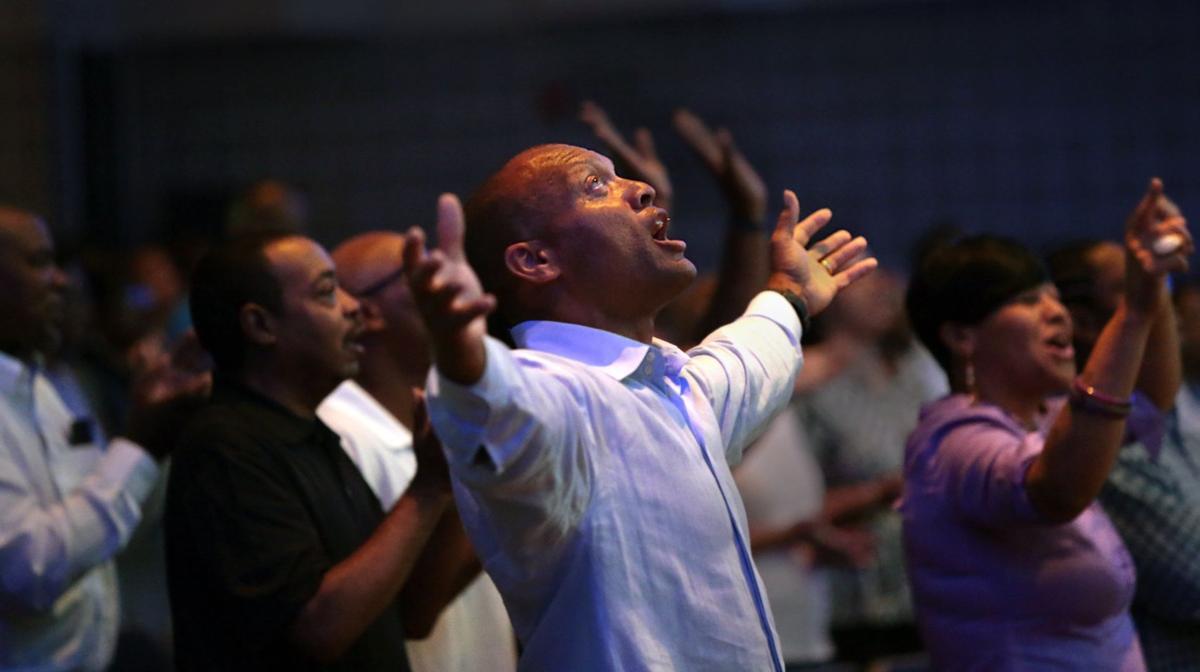 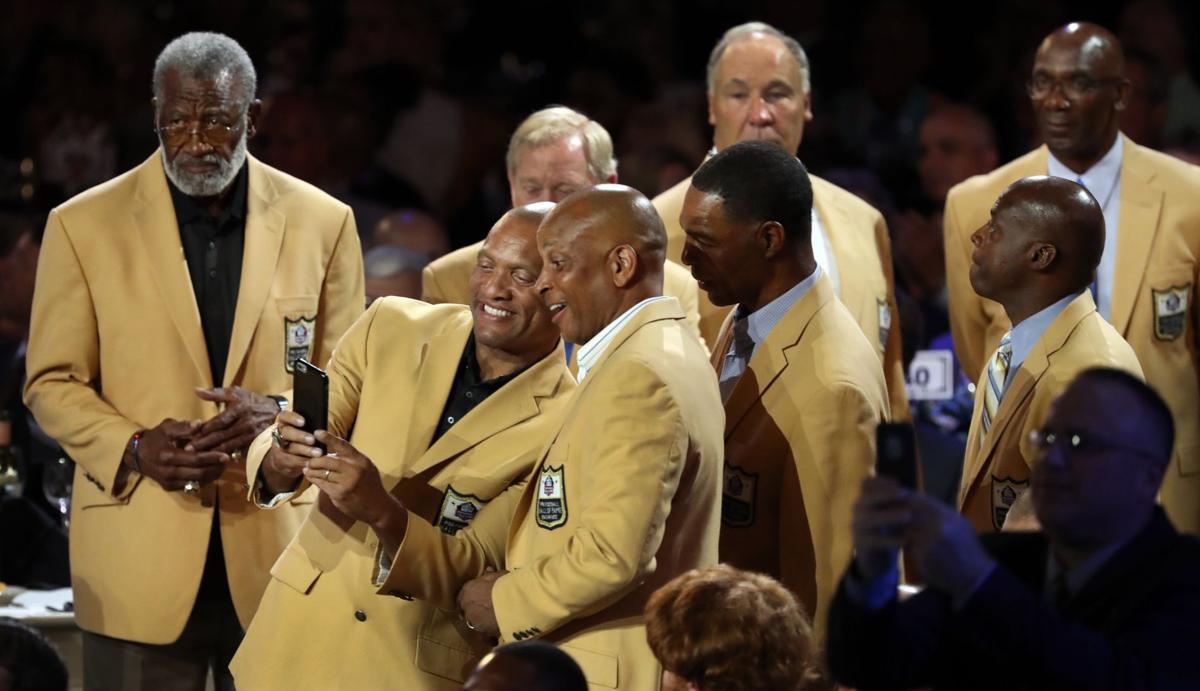 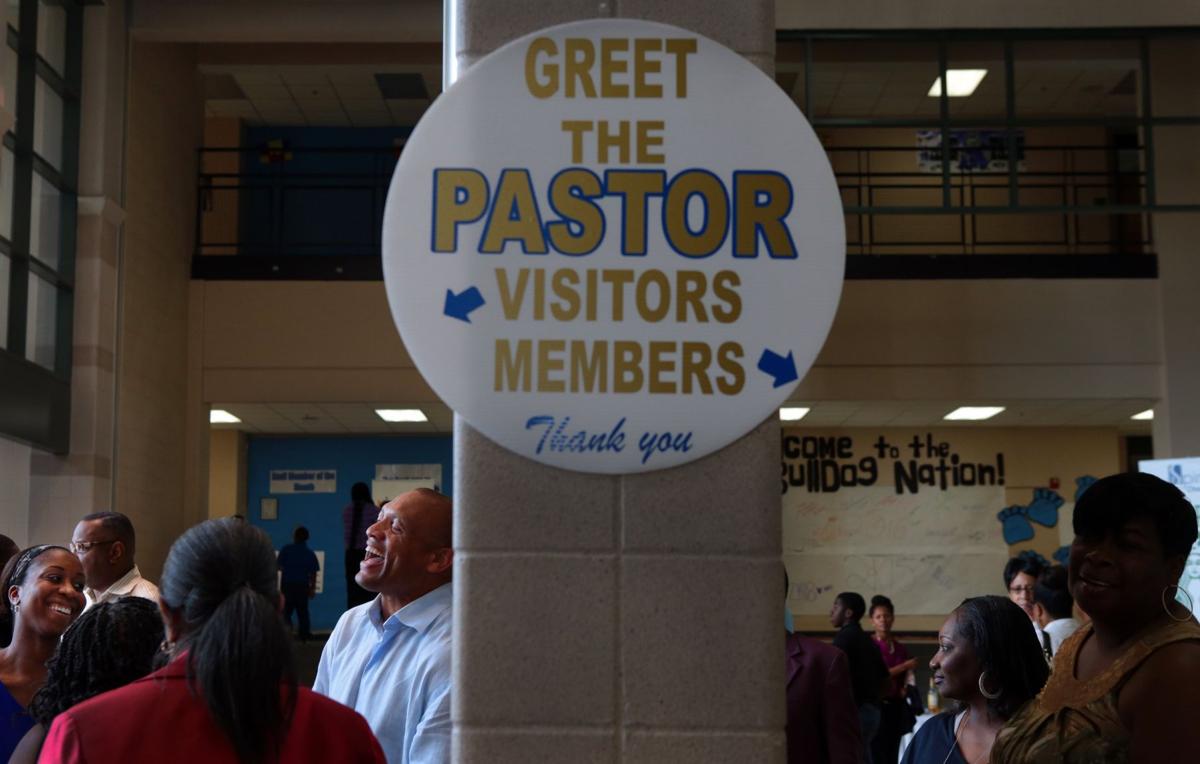 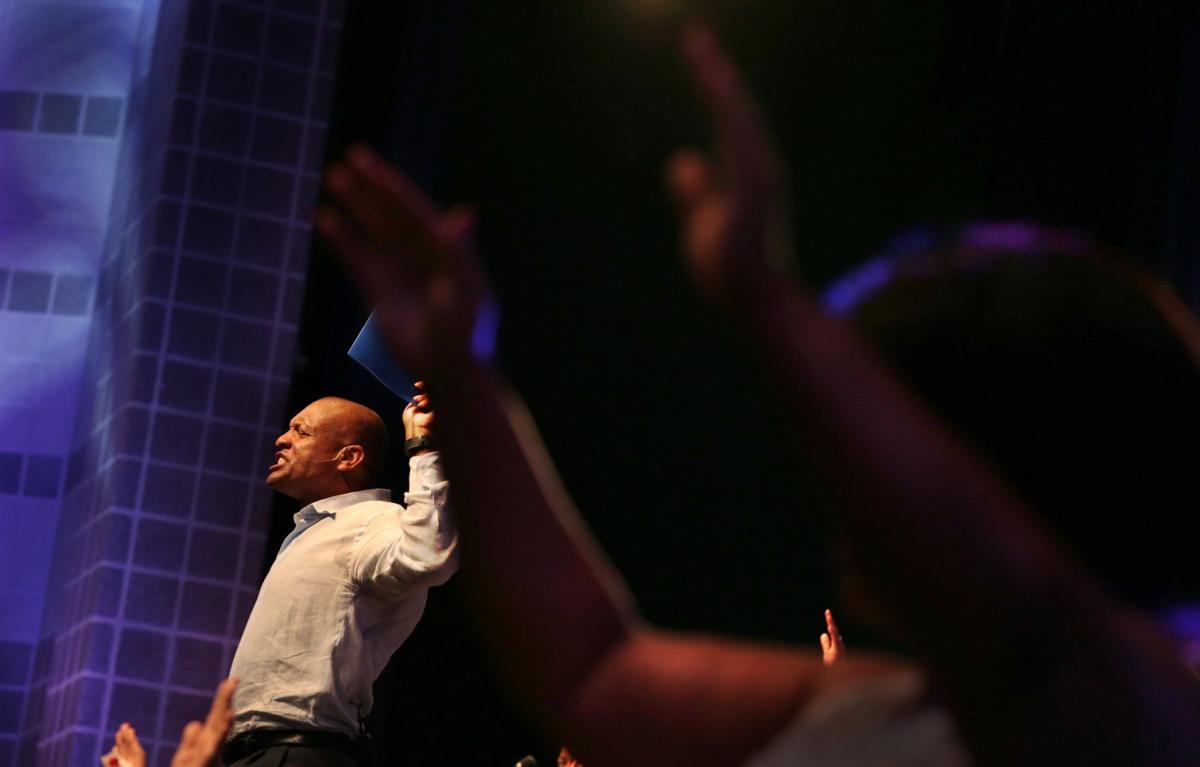 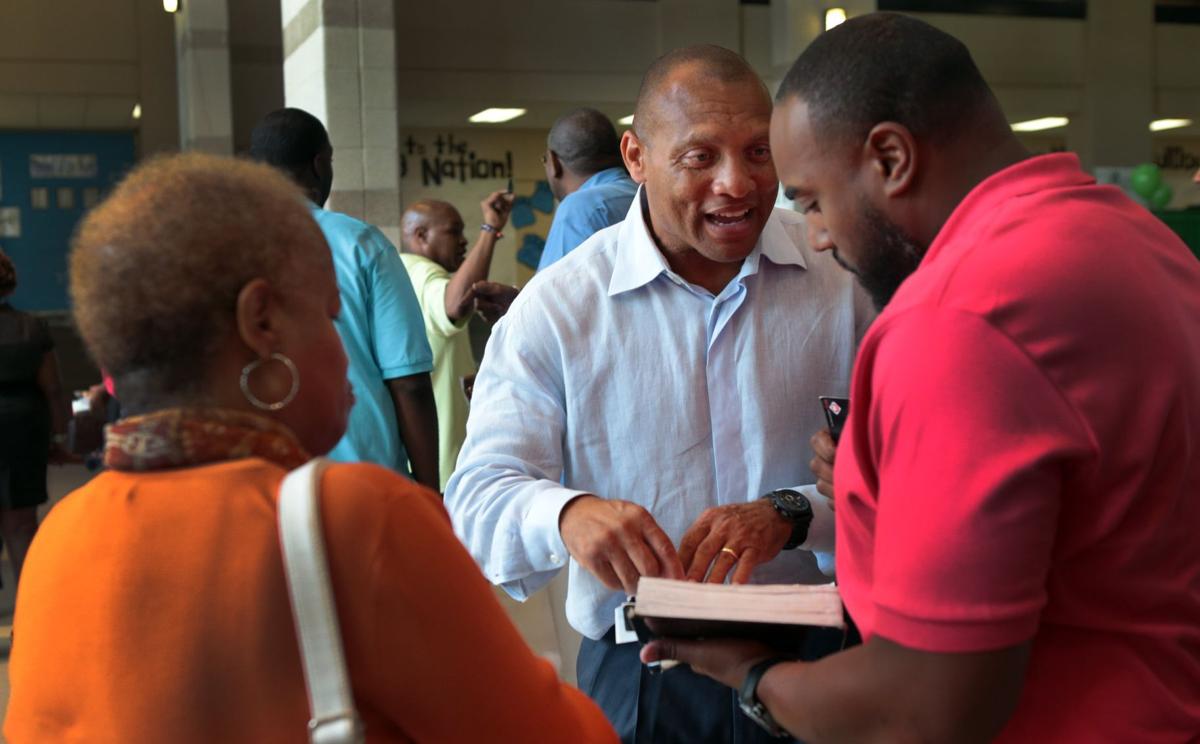 Aeneas Williams finished his spectacular football career in 2004, in St. Louis with the Rams. And Williams, one of the best cornerbacks in history, was enshrined in the Pro Football Hall of Fame in 2014.

But he wasn’t done, far from it. In fact, he was just getting started with the rest of his journey, the part many consider much more important than his impressive accomplishments on the field.

His remarkable life is chronicled on Friday in the latest installment of NFL Network’s “A Football Life” series, at 8 p.m. Central time.

Williams is a pastor at Ferguson-based The Spirit Church, which he founded in his basement, and was instrumental not only in helping people in that community cope with the rioting there that was fueled by the Michael Brown case — which erupted a week after his Hall induction — but has been a central figure in the recovery and rebuilding of that community.

Appropriately for a guy who views the spotlight that shines on him for his football exploits as a conduit to a higher and more impactful calling, the hourlong show opens not with any of his football feats but instead his role in helping quell the Ferguson turbulence.

The first person interviewed is Ferguson Mayor James Knowles III. He says he called Williams, who was in his home state of Louisiana, shortly after Brown was shot.

“At that time it wasn’t a national issue,” Knowles says. “He said, ‘Do you need me to come home?’ I said, ‘People may think I’m crazy, but I think we really need some help here. I could see this getting out of control.’ He said, ‘I’ll get on the first plane back from Louisiana.’”

The significance isn’t lost on Williams, who would have no connection to Ferguson had he not been traded to St. Louis before the 2001 season after spending the first 10 years of his NFL career with the Phoenix/Arizona Cardinals.

“You’re thinking out of all of the places, how in the world could we be here?” Williams, 49, asks in the documentary. “I asked that question maybe once. After that I knew why all of us were here.”

He has served as a mediator in the tension between residents and police. But he wasn’t always the peacemaker. In fact, nearly the opposite one time. He discusses how his life almost went the wrong way when he was a youth and nearly stabbed someone. But he didn’t.

While off-the-field matters drive the program, it certainly doesn’t gloss over his football career. It chronicles his rise from growing up near New Orleans through walking on to the football team at Southern University (where he had “a cursing problem”), then shining in the NFL with the Cardinals and Rams.

During his stay in Arizona, legendary defensive guru Buddy Ryan (architect of the 1985 Bears epic unit) became coach of the team and son Rob was in charge of the defensive backs.

Rob talks about Williams being “our best player. My father came up with putting Aeneas on the top receiver. That is something my father had never done. He had never had a cornerback be that elite where you could put him on the best receiver of the other team.”

It took some convincing for Williams to buy in to that philosophy.

“The truth was I was afraid,” he says. “Coach Rob put his arms around me. He says, ‘Aeneas, you can lead this league in interceptions, you can make All-Pro and you can make the Pro Bowl. Coach Rob said it so pointedly I believed it. But I shudder to think that if I don’t learn to master this fear and I don’t learn to get out of my comfort zone, I never, never become the corner I was capable of being.”

Later Williams was a central figure in helping the Rams return to the Super Bowl for the 2001 season, despite not having been on hand when it won two years earlier.

“It was fun to watch a guy come in — he was an outsider from what we had accomplished early — and have such a dramatic, instantaneous impact on our team and more importantly on the character of the men around him,” Rams quarterback Kurt Warner says.

Adds teammate London Fletcher: “We don’t make it back to the Super Bowl without the play of Aeneas Williams.”

The Rams lost that Super Bowl, a big upset against New England, and many of their fans were crushed — some still to this day.

“I remember after the game ... getting on my knees and telling the Lord, ‘Thank you.’ Not for the loss, but for the opportunity,” he says. “I got a chance to play in the Super Bowl in my hometown. We gave it our best, we came in second place.”

His wife, Tracy, also a pastor at The Spirit Church, concurs.

“Even though we didn’t win, God gave him a special moment,” she says. “We’re just so thankful, 14 years in the NFL — it’s just been an incredible journey for us. Just his whole story lets people know, even our children know, that northing’s impossible if you put your heart into it. ... But you have to do the work.”

Knowles, the Ferguson mayor, touches on that when talking about the aftermath of the riots.

“I had people tell me constantly, ‘No community has ever survived a race riot.’ So you look at Ferguson today. We have more businesses operating within our city limits” than before the tumult. “... Property values have been going up and up. The importance of having someone like Aeneas to continue being a stabilizing force in the community was pretty big.”

And Williams continues to be a role model even for some of his middle-age contemporaries.

“I love that man. ... I’m glad he’s in my life,” former Ravens standout linebacker Ray Lewis says. “When I saw what he was doing in Ferguson, he brings all these people together ... I said this is absolutely amazing so I’m going to piggyback and ... build something around helping people.”

Williams had some interesting things to say in an interview with the Post-Dispatch this week outside of the program, including how he and his family consider it a blessing to have ended up in St. Louis.

“It’s one of the most philanthropic cities in the country,” he says. “Having the challenge of being right there in Ferguson when everything erupts and it turning out to be the kerosene that would ignite things throughout the country” was eye-opening. “But now, through The Spirit Church, to be able to walk down the center of the street with people on opposing sides to come together ... and find solutions so we can make the community better than it was prior to the situation” is very rewarding.

His peacemaker role does not end there. He also is serving as a senior adviser to the NFL in its efforts to reach out to players who have been so upset with conditions in the U.S. that they have protested during the national anthem. Williams said he has been working with owners, the commissioner and players to find a solution.

“I think a lot of progress has been made,” he said. “First is the empathic ear of listening. Part of it, all the way back to the initial protest of Colin Kaepernick, is to No. 1 not to turn off a huge portion of our fan base by even having a perception to the military and law enforcement that there is a slight or disrespect. It’s a young league, so when you get young passionate players you get together with them and find out what are the issues. What are some of the constructive ways to cause change without taking away from this great game?”

On a more personal level, he is excited about the growth of The Spirit Church (http://www.thespiritchurch.org), which has been holding services at McCluer South-Berkeley High School. If all goes to plan, the final Sunday worship there will be this weekend. A new facility is about to open at what formerly was Northwest Plaza, where the Toys R Us store was located. The goal is for the first service there to be on Dec. 17. Although it is in St. Ann, it’s not far from Ferguson.

He said attendees have grown from five — his family members — when he began preaching in his basement in 2007, to about 450 regular worshippers now.

“This is a much bigger space,” he said. “We have been blessed.”

NFL roundup: Falcons get a key victory over Saints

With the season potentially hanging in the balance, Deion Jones leaped high in the air, about as high as he could go.