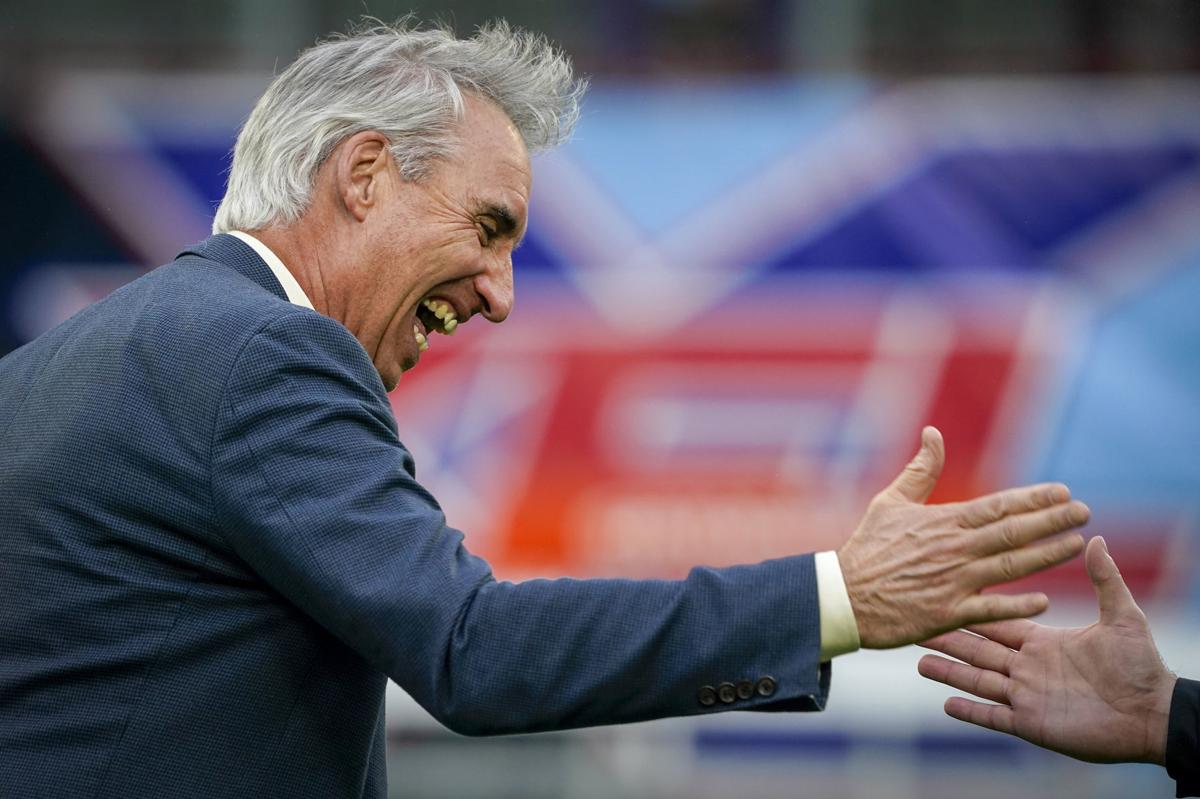 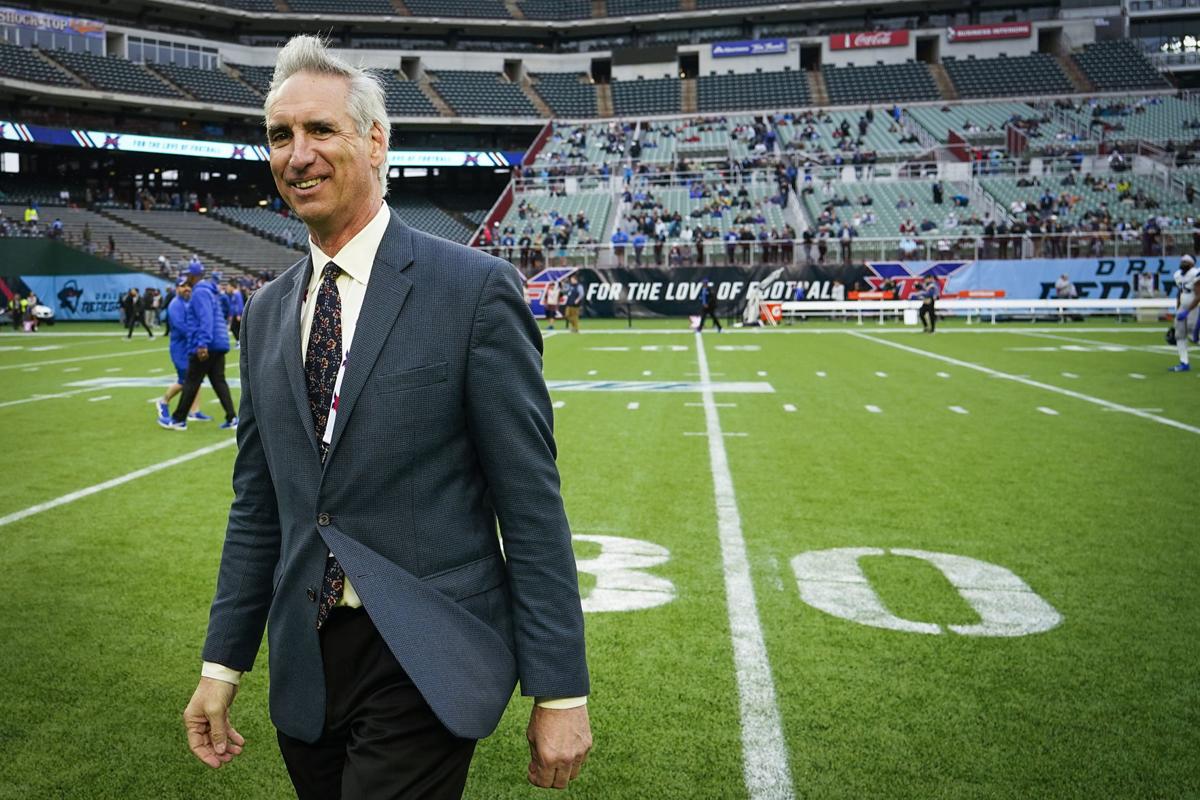 XFL Commissioner Oliver Luck walks on the field before the BattleHawks faced the Dallas Renegades on Sunday, in Arlington, Texas. It was the debut for each team.

It was an entertaining debut for the XFL last weekend, with its quirky rules, all-access television coverage and better-than-expected, though not always scintillating, play on the field. Those factors melded to help create strong TV ratings in the second incarnation of the league.

Pro wrestling guru Vince McMahon again founded the XFL, and owns it. But the telecasts this time veered away from the WWE-style showmanship and bawdiness that prevailed in the previous version of the league, a one-year massively failed run in 2001 that kicked off with McMahon bellowing on a Las Vegas field, in a gravely growl, “This is the X-F-L!”

The bravado not only was targeted to those in attendance but also a prime-time audience on NBC and the league drew big ratings for the opener, but quickly experienced a massive retreat.

Things were much more tame this time and on the TV side the innovations seen in Week 1 were interesting, though at times overused.

Some of the best additions came during review of plays, when viewers not only could see what the replay official was watching (though from a distance), but could hear the conversation with the referee. It was highly interesting, behind-the-curtain material foreign to NFL viewers.

There also were discussions of the betting line. And there were in-game interviews with players and coaches, which had a varying degree of usefulness.

BattleHawks quarterback Jordan Ta’amu was corralled after throwing a touchdown pass early in the fourth quarter that gave his team a 12-9 lead Sunday over Dallas.

In the Seattle-DC game, Seattle’s Dillon Day was buttonholed as he came off the field after committing a penalty and uttered a profanity that got on the air.

On the other hand, there was a gem from ESPN sideline reporter Pat McAfee, who was a punter in the NFL (with Indianapolis). After the BattleHawks’ Marquette King deadened a punt at the Dallas 1, teammate Steve Beauharnais dived on the ball and pushed it into the end zone for a touchback.

McAfee then vowed to track down the offender.

“I’m going to go talk to that guy who just ruined a perfect punt,” he growled.

But McAfee was much more low-key when he sat next to Beauharnais on the bench a short time later.

“My man, incredible effort on a special-teams play there, ends up backfiring a little bit,” McAfee said. “What was going through your mind?”

The answer: “I thought (a Dallas player) touched it, so I tried getting on the ball before he got on the ball and it went into the end zone.”

To which McAfee emphatically said, “I can respect the hell out of that!” before bolting away.

The telecasts carried communications from the coach calling plays and athletes on the field, an interesting nuance at first. It was novel to hear BattleHawks offensive coordinator Chuck Long tell the offense to run a “501 Jet Trail,” or a “602 Follow Spot” or a “901 Viper Switch” and Dallas offensive coordinator Hal Mumme instruct an “Open H5-95” to be run.

But that tool was overused, not just on the BattleHawks’ telecast but throughout the weekend. Terminology not only became too technical but also at times was heard at the same time announcers were talking, creating two streams of simultaneous chatter.

And the announcers sometimes drooled about the league, as the relationship between the networks and XFL seemed too cozy.

There were countless utterings of the XFL’s “for the love of football” slogan, and McAfee said the access available “is insane” and “revolutionary.”

That might be true, but he also bloviated that the XFL “is a good thing for the country!”

It sure is comforting to know that homelessness, crime and maybe even political discord might be on the way to massive reductions thanks to this new football league.

The XFL’s first game, Seattle-DC on ABC Saturday afternoon, averaged about 3.3 million viewers, according to Nielsen.

The opener 19 years ago, which was much more hyped and was shown in prime-time on a Saturday night, averaged more than 10 million. But that audience quickly fled after sampling the product, and never came back. The league died after one season. The opening-game audience this year was about what the Alliance of American Football drew for its debut last year, but it had a much lesser TV deal than the XFL now has, was financially strapped and didn’t even finish its season.

There are a lot of positives for the XFL after Week 1, now it will be interesting to see how it progresses.

League commissioner and CEO Oliver Luck was interviewed after the final game of the weekend and said “not in my wildest dreams,” did he think things would have gone as well as they did. “What a great opening weekend for us.”

ESPN’s Scott Van Pelt had an interesting observation about the XFL’s potential impact on the NFL in his Monday night “SportsCenter” show. He said the established circuit could take at least one lesson already from the newcomer.

“If they’re smart, they would adopt one thing immediately, the transparency of the officiating review,” he said. “. . . The biggest issue that I feel like the NFL wrestles with is its officiating. Being in on the conversation, to help understand how a call that is being reviewed ultimately is administered, is really interesting.

“The XFL allowing viewers to listen in on the conversation provides access to a process that I think all football fans are curious about. It had the same kind of feeling to me that the first-down line and the score bug did the first time I saw them. They weren’t always part of the telecast, but as soon you saw it, didn’t you think it was something the viewing experience would be diminished without?”

But he sounded like he doesn’t expect to see conversations from the replay booth on his network, or any other, when the NFL season kicks off next September.

“The NFL doesn’t seem like the league that’s real keen allowing us behind the curtain,” he said.

If not, Van Pelt has one question to the NFL.

“Why? Why wouldn’t you want your fans to see how those decisions are made?” he asked. “The XFL might not become a pain to you — but the innovations they create, that fans come to expect, could be.”

Meanwhile, KTVI sports director Martin Kilcoyne put things in perspective regarding the XFL in his “TKO — The Kilcoyne Opinion” commentary on a Channel 2 Sunday night sportscast.

“We hear people saying, ‘Well this isn’t the NFL,’” Kilcoyne said. “It’s not. But it doesn’t need to be. It’s a different league. . . . Don’t take it seriously, have a little fun with the football.”

Sellout crowd at Dome, albeit about 27,000, expected for pro football's return to town.

BattleHawks look to keep it rolling in Houston

XFL Commissioner Oliver Luck walks on the field before the BattleHawks faced the Dallas Renegades on Sunday, in Arlington, Texas. It was the debut for each team.