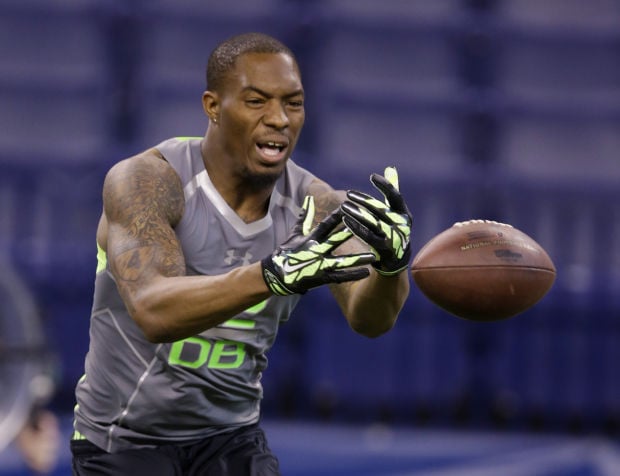 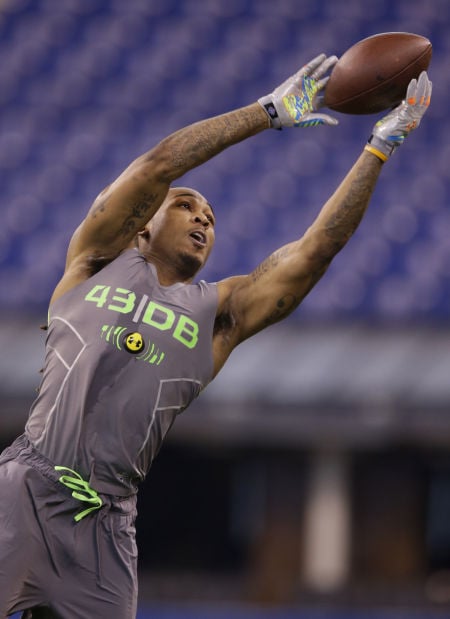 Louisville defensive back Calvin Pryor makes a catch as he runs a drill at the NFL football scouting combine in Indianapolis, Tuesday, Feb. 25, 2014. (AP Photo/Michael Conroy)

There seems to be little dispute that Ha Ha Clinton-Dix of Alabama and Calvin Pryor of Louisville are the top two safeties in the draft.

And there wasn’t much separating them at the NFL scouting combine in Indianapolis, either. With defensive backs working out Tuesday, the last day of the combine, Clinton-Dix and Pryor posted identical 40-yard dash times of 4.58 seconds.

Pryor had a better vertical jump, but Clinton-Dix had the better broad jump.

And their weigh-in numbers were almost identical, with Clinton-Dix at 208 pounds to Pryor’s 207.

“I’m one of the best safeties in the draft because I played in (Nick) Saban’s system,” Clinton-Dix said. “I feel like I’m prepared for the next level. I’m a fast learner. I play fast. I study a lot of film; I study the opponent a lot. And that’s about it.”

As for Pryor, he drops the “one of the best” part out of his answer. He thinks he’s THE best.

“I do feel that,” Pryor said. “I’m very confident in my game. And my film speaks for itself. ... I can play strong safety, free safety. I can come up and hit. I feel I can cover. I’m a playmaker and I’m a leader.”

Despite improved play at the position late in the season, the Rams could use help at the position. A rangy type to break up deep balls, get to places on the field others can’t and display good ball skills would be ideal. In other words, the next Earl Thomas.

No one’s saying Clinton-Dix or Pryor is the next Thomas. Then again, if the Rams take a liking to either — and both had formal interviews with the Rams at the combine — they could be in a very good position to draft them. That’s because Clinton-Dix and Pryor both are projected to go in that 10-to-20 range in the draft, and the Rams are sitting at No. 13 overall with the second of their two first-round picks.

In a mock draft the Post-Dispatch participated in Tuesday for Bengals.com, Pryor and Clinton-Dix both were available at No. 13.

(Both of the top cornerbacks were available as well: Oklahoma State’s Justin Gilbert and Pittsburgh’s Darqueze Dennard.)

On paper, Clinton-Dix looks like the best fit for St. Louis because he’s more of a free safety. He had five interceptions as a sophomore in 2012. The consensus is, however, that he didn’t play as well in 2013 and there are several possible reasons for this.

He was suspended for two games for accepting illegal benefits from Alabama’s assistant strength coach — reportedly a loan of $100 to $300. He also had knee issues and underwent arthroscopic surgery for a torn meniscus in early December.

But maybe it’s also because he was used more in the box — like a strong safety — in 2013, and recorded only two interceptions.

“My sophomore year I wasn’t in the box that much,” Clinton-Dix said. “ But my junior year I feel like I got involved in the box a lot and was able to make a lot of tackles in the box. ... You know, at the next level you’ve got to know both. You’ve got to be able to play in the box and play deep.”

Clinton-Dix may have the edge over Pryor when it comes to coverage skills and quickness. But there’s no doubt who’s the bigger hitter — not even Clinton-Dix disputes this.

“I can’t say I can hit like him,” Clinton-Dix said.

“He doesn’t want to injure anybody, but he brings a certain physicality that if you’re going to throw the ball down the middle of the field, you’re going to pay a price,” Bedford told the Milwaukee Journal Sentinel.

Pryor, who says he likes to play “like my hair’s on fire,” had three interceptions and forced two fumbles last season at Louisville.

He said his toughness came from his father at a young age.

“I used to fall on the ground and I’d think I hurt myself,” Pryor said. “He’d just tell me to get back up and keep going.”

Like Clinton-Dix, Pryor turned pro after his junior season. And like-Clinton-Dix, Pryor said he played more in the box this season in a strong safety-type role after spending most of his previous time at Louisville playing the deep end of the field in a free-safety role.

Clinton-Dix projects as more of a free safety in the NFL, and Pryor as a strong safety. But if the Rams think Pryor has enough range and coverage skills, he could find himself in St. Louis. After all, coach Jeff Fisher never turns his back on a hard hitter.

Even though Clinton-Dix and Pryor both touted their versatility and ability to play both strong and free, their answers were telling when asked which NFL safeties they liked to watch.

The first name mentioned by Pryor: Kam Chancellor of Seattle, perhaps the game’s top strong safety, and certainly one of the game’s biggest hitters.

When it comes to first names, it’s hard to beat Ha Ha Clinton-Dix.

So what’s the deal? Well, his real first name is Ha’Sean, but that went by the boards long ago.

“My first name’s pronounced ‘Ha-seen.’ But it’s spelled ‘Ha-shawn,’ ’’ Clinton-Dix said. “So people got mixed up a lot. My grandmother gave me that name (Ha Ha) when I was about 3 or 4 years old, so everyone’s been calling me that since then.”

Bring your Rams and NFL questions to the weekly live chat with the Post-Dispatch football writer.

Clowney could be Rams' ace in the hole

A trade-down with Atlanta, which has the No. 6 overall pick, is a possibility.

But it's far from clear if Rams will use their first pick on a wideout.

What to do at 2? Rams playing wait-and-see with Texans

With Houston not close to decision at No. 1, Rams have lots of possibilities.

Louisville defensive back Calvin Pryor makes a catch as he runs a drill at the NFL football scouting combine in Indianapolis, Tuesday, Feb. 25, 2014. (AP Photo/Michael Conroy)