Become a Member
Read Today's E-edition
Share This
Ram Bytes: Can conservative coaches fly with this offense?
0 comments
Share this
1 of 2 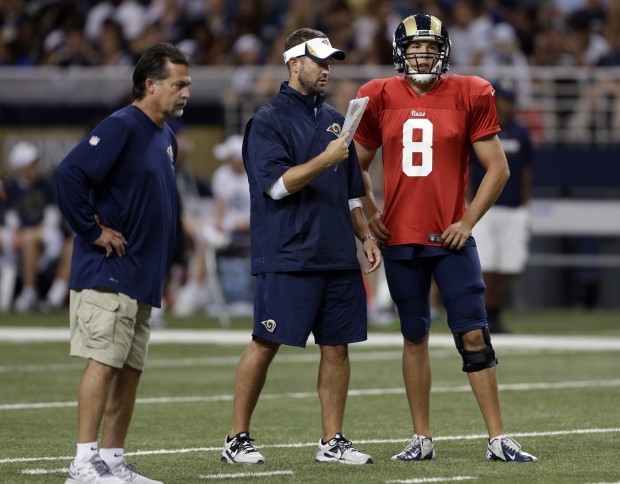 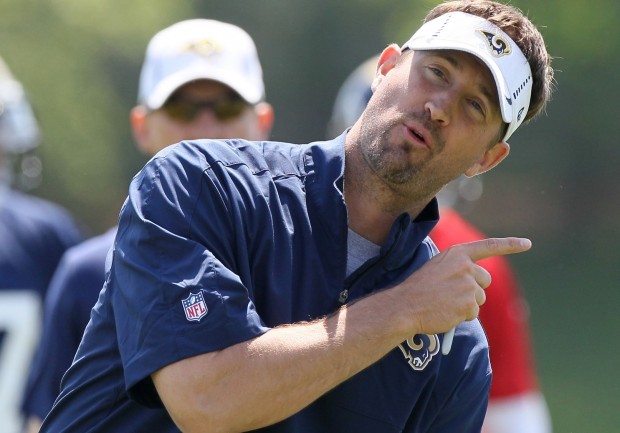 I'm using my right to overreact to a loss in the NFL...

1. As I discussed in my "Breakfast with Bernie" video Monday morning, offensive coordinator Brian Schottenheimer supressed his own offense for too long in Sunday's loss. He was overly safe. He wasn't even trying to take advantage of the enhanced playmaking skill that's surfaced in this offense. Of the team's first 10 passing attempts, five were directed to RB Daryl Richardson. And when Schottenheimer finally let his offense go — out of necessity, because the trailing Rams had no choice — we saw some excitement. We saw what this group can do when the coaches don't sit on them with a dull, unambitious and timid approach.

When the coaches removed the governor and let QB Sam Bradford play the kind of game that he likes to play, the offense took off. In the second half at Atlanta, Bradford had 228 yards passing, threw three TDs and had a passer rating of 108.5.

It's only two games, but we've seen a pattern: Schottenheimer buries Bradford in a vat of vanilla offense early. And after Bradford is belatedly released to make plays, he produces.

Bradford's passer rating in the first half of the first two games this season: 82.3. With one TD and one INT.

Bradford's fourth-quarter passer rating through two games: 113.6, with 3 TDs and no INTs.

It seems to me this is a question of philosophy. The histories of head coach Jeff Fisher and OC Shottenheimer don't indicate a willingness to open up and let the offense flow. They're both bullish on the running game.

During Fisher's long tenure as coach of the Houston-Tennessee franchise, only two teams had more rushing attempts than Fisher's offense over a 16-year period.

Over Schottenheimer's six seasons as the OC with the Jets, his offense had the most rushing attempts in the league between 2006 and 2011.

Given their obvious preferences here, can the coaches evolve and put together an offense that's compatible with the in-house offensive talent? Or will they continue to do it their way, even if their philosophy is out of tune with the offense's strengths?

It's great to run the ball ... when you actually are capable of running the football in a superior way. But through two games Richardson is averaging 3.2 yards on 30 carries. It's good to flip the ball to the running back ... if you have Lenny Moore, Terry Metcalf or Marshall Faulk. Or Larry Centers for that matter. But for two games in a row, the Rams have come out and featured Richardson early in the passing game.

The NFL has changed. It's a game played in the air. It's a game decided in the air. And from a roster standpoint, the Rams have recognized the change by upgrading their talent. They've brought in faster and more dangerous receivers.

Here's the big question: can Fisher and Schottenheimer adapt and run a relevant offense? Or will the Rams remain stuck in the mire of old-world football?

The Rams have scored 51 points in two games against two strong defenses.

But this is what I want to know: how many points could the Rams score with a more aggressive attack? What damage could the Rams do if the coaches were more enthusiastic about using the no-huddle offense?

3. I don't give Bradford a pass here. I said it last week, and I'll say it again: too many checkdowns. He's too quick to dump the ball off. Bradford has to change his mentality. And he would change that mentality faster if the coaching staff showed more confidence in the downfield passing game. When the coaches have been willing to let it fly, Bradford has responded. He's moved the offense and put up the yards and the points. But for too long, Bradford was programmed to think the safety-first way. It seems to me that they all need to be more open-minded out there at Rams Park: the QB, the head coach and the OC. It's a brand new game on offense in the NFL. The Rams have the horses to go with it. So why not take full advantage of the talent?

Again, Bradford has to alter his mindset. He attempted 55 passes in Atlanta, and according to ESPN Stats & Info, 35 of the passes traveled 5 yards or less in the air... and his average pass traveled 5.6 yards.

My beef isn't with the number of passes; it's the nature of the passes. The limited dimension of the passing game.

The Rams are passing for a bunch of yards, but they're doing too much dinky stuff... that's why it takes them so long to march the field and score. They need a faster tempo. They need to put defenses on alert and worry about deeper throws, intermediate throws.

In two games Bradford and the Rams have attempted only five throws where the ball travels 20+ yards in the air. That's tied for the second-lowest total among NFL quarterbacks that have played the first two games.

The Rams has to be bolder in their thinking.

And that includes Bradford.

4. I'm going to stay on this point with a final, related comment: the Rams offensive line is doing a very nice job of protecting Bradford. In the past, the O-line couldn't keep the jackals out of Bradford's pocket. But he hasn't been sacked in the first two games. (That streak began late last season.) And according to Pro Football Focus, Bradford has been under pressure on 32.3 percent of his dropbacks... that ranks 18th, meaning that 17 other QBs have faced more pass-rush heat than Bradford. That's another reason to be more committed to a more wide open offense.

5. Not that you needed me to tell you this, but the Rams' special teams are off to a bad start. Before I get to the negative stuff, there are some positives. Kicker Greg Zuerlein is money. Punter Johnny Hekker is third in the NFL with a net punting average of 46.7 yards. And the Rams haven't given up much in the return game; they rank in the top five for lowest punt-return average (1.7 yards) and kickoff return average (16.3 yards.)

Special teams coach John Fassel has some explaining to do.

6. In case you didn't notice (just kidding) Robert Quinn is one helluva defensive end. Sunday he invaded Matt Ryan's space for a sack, four QB hits and five hurries. In the first two games Quinn has four sacks, six QB hits, and six hurries. According to Pro Football Focus, Quinn ranks second among 4-3 defensive ends in pass-rush pressure percentage, with 16 total pressures in 75 pass-rush snaps. Through two games, Quinn also has a "plus" grade in run defense, and Pro Football Focus has him rated as the league's best all-around defensive end so far. Long way to go, but still....

7. Another quick comment on Quinn: the fired GM Billy Devaney and ousted head coach Steve Spagnuolo made a lot of horrible personnel decisions, but they came up money on the Quinn draft pick. Quinn was a very nice parting gift from Devaney and Spags.

8. Defensive coordinator Tim Walton better re-examine the pass-defense strategy. Through two games here's where the Rams' pass defense ranks in the key categories: 24th in yards per attempt (8.45), 29th in completion pct. (71.1), 27th in gross passing yards (701), 28th in passer rating (107.6). That also explains why the Rams are 32nd (last) in stopping opponents on third down; the Cardinals and Falcons converted 52 percent of third-down plays into first downs. And just imagine the extent of the damage if Quinn and the Rams weren't getting pressure on the quarterback.

9. It's been ugly at cornerback so far. Let's take a look at the numbers from the first two games, provided by Pro Football Focus.

When quarterbacks are burning your starting CBs for a 73.3 percent completion rate and three TDs with no interceptions, you have big problems. And that's with a pass rush. Dallas QB Tony Romo will be a happy man when he studies the video; if the Rams starting corners continue to play like this, it's about as easy as it gets for a QB.

10. Of course, Walton's decision to iuse so much "off" coverage only makes it easier. As does the baffling decision to match up 1-on-1 against the other team's best receiver instead of rolling a safety to one side to help contain the likes of Larry Fitzgerald and Julio Jones.

11. Rookie outside linebacker Alec Ogltree is off to a terrific start against the run. According to Pro Football Focus, he ranks 6th among OLBs in run-stop percentage in the first two games, and is tied for first in tackling efficiency. He's tied for second for most solo tackles. Ogletree has struggled in coverage; he's been burned for eight completions in 11 attempts for 80 yards and a TD. The passer rating against him is 123.3 ... but that's to be expected. I didn't think Ogletree would walk into the NFL and immediately excel at coverage. He'll get better at it.

12. The Falcons' defensive game plan centered around smothering tight end Jared Cook in coverage. That makes sense, obviously. Cook dominated Arizona in Week One. But here's what I don't understand ... when the defense is focusing on taking away a specific receiver, shouldn't that open things up for Tavon Austin, Chris Givens and other receivers? Eventually — in the second half — the Rams began exploiting Atlanta's emphasis on denying Cook. But what happened early? Why couldn't Schottenheimer make adjustments and make the Falcons pay earlier? The Rams should have jumped on that early in the game instead of dumping the ball off to the RB.

Footballs are flying through the air like never before, and the Rams are trying to join the fun.

Bernie: Rams not stuck in the past after all

Critics of offense, including this one, have been a bit hasty.

Columnist Bernie Miklasz whacks the Rams' staff for 'coaching scared' in the first half because it cost them the game.

Bernie's Press Box: Sound off about the Rams