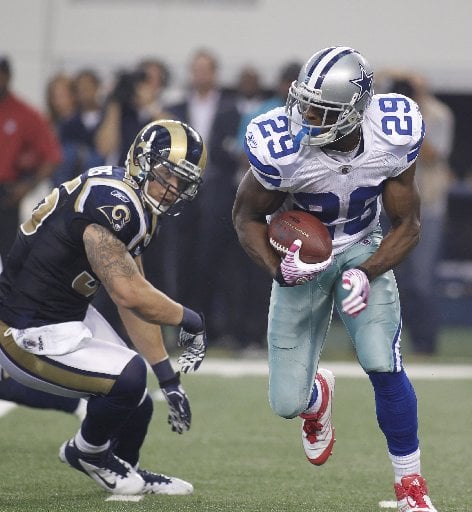 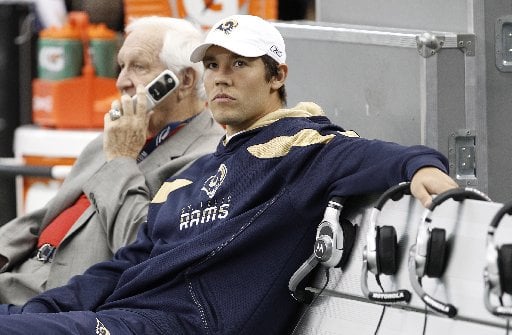 Quarterback Sam Bradford, on the Rams' bench before the start of Sunday's game in Dallas. Bradford is inactive because of an ankle sprain. (AP Photo)

Bradford, the former Sooners Heisman Trophy winner, could only look on in admiration -- or was it disgust? -- as former OU teammate DeMarco Murray left his cleat marks all over the St. Louis defense.

Murray got his day started with a 91-yard touchdown run in the first quarter, and didn't stop until he had gone well over 200 yards rushing. His 252 yards rushing was a Cowboys single-game record and also a record for a Rams opponent.

On this day, the Cowboys didn't really need Tony Romo except to hand off. But Romo got into the act as well, throwing a couple of TD passes as the Dallas crushed the hapless Rams 34-7. The Cowboys improved to 3-3; the Rams fell to 0-6.

Veteran A.J. Feeley made his first start since 2007, in place of Bradford who did not suit up because of a high ankle sprain. The Rams couldn't sustain much of anything on offense, even with the addition of Brandon Lloyd to the receiving corps via last Monday's trade with Denver.

As for the St. Louis run defense, it made Murray look like the next Emmitt Smith or Tony Dorsett with a mirage of missed tackles and missed gaps.

Sunday against Dallas, it was Murray racing 91 yards on a run up the middle for the game's first touchdown. It was the longest run against the Rams in franchise history and came on a delayed handoff that had the St. Louis defense thinking pass. Defensive tackle Fred Robbins looped to the outside on the play and linebacker Brady Poppinga was blocked at the point of attack, leaving a gaping hole.

Late in first quarter, Cadillac Williams fumbled away a screen pass with the Cowboys taking over at their 38. Despite a sack by James Hall, the Cowboys gobbled up yardage in big chunks in the passing game after the takeaway, with Tony Romo completions of 18 yards to Jason Witten, 34 yards to Dez Bryant, and 17 yards to ex-Ram Laurent Robinson giving them a first-and-goal at the St. Louis 4.

On third-and-goal from the 1, Romo threw to a wide-open Jason Witten for a TD and a 14-0 lead. In what looked like a busted coverage by the Rams, safety Quintin Mikell was left trying to cover two Cowboys in the end zone. Once he left Witten, that's where Romo threw it.

But the Rams' offense showed some rare life following the ensuing kickoff, taking over on its 15. The big play came on third-and-3 from the Dallas 46, with Steven Jackson roaring up the middle for a 40-yard gain to the Dallas 6. Operating against the NFL's top-ranked rush defense, Jackson had only 14 yards on 10 carries until that run. On the next play from scrimmage, Jackson scored on a 6-yard run, running untouched to his right into the end zone.

The Rams got the ball back with a chance to tie before halftime, but a third-down throw by Feeley intended for Brandon Lloyd was intercepted by Dallas corner Mike Jenkins, giving the Cowboys possession on the St. Louis 30 with 3:34 to play in the first half. But Dallas, second-worst in the league in red zone offense ahead of only the Rams, had to settle for a 30-yard field goal by Dan Bailey and a 17-7 halftime lead.

Giant step back: Bradford out for Rams

Back QB Feeley makes his first start since 2007 as 0-5 Rams play at Dallas.

Rams lose two linemen to head injuries in first half

Quarterback Sam Bradford, on the Rams' bench before the start of Sunday's game in Dallas. Bradford is inactive because of an ankle sprain. (AP Photo)