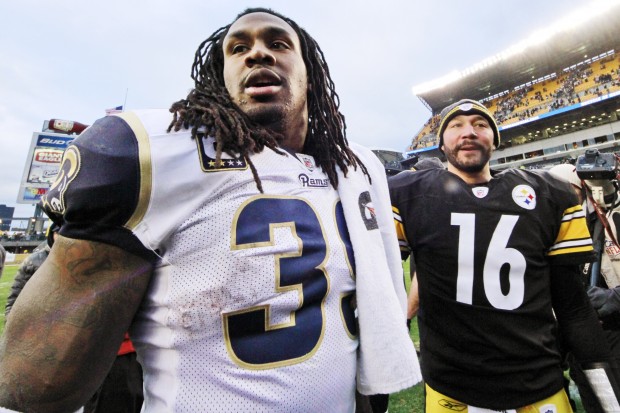 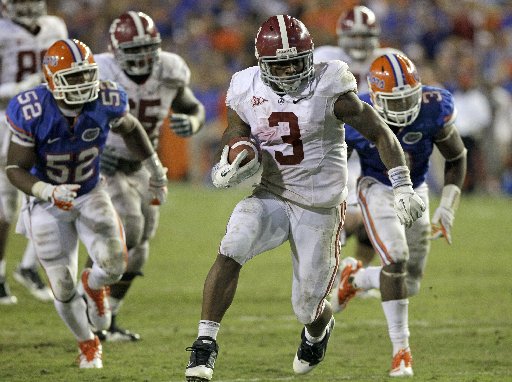 Alabama running back Trent Richardson might be available to the Rams if they hold on to the No. 6 overall pick in the 2012 NFL Draft. (AP Photo) 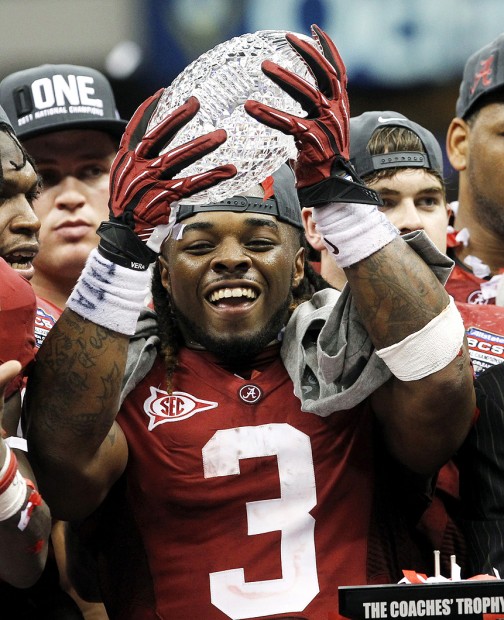 If the Rams end up taking Alabama running back Trent Richardson at No. 6 overall, so be it, says Steven Jackson.

"The Rams are going to do what's best for the Rams," Jackson said. "I understand that. It's a business."

If Richardson is the pick, Jackson will fall back on past experience in succeeding Hall of Famer Marshall Faulk in 2004 and 2005. "All I can do through my own lessons replacing another legend, is try to be there for the young guy," Jackson said. "If he's receptive, I'll help him and do the world for him. And if not, you've just got to compete — and I'm not backing down."

In 2006, Faulk was gone. In '04 and '05, Faulk wasn't thrilled having his successor on the roster. But the circumstances were different then. In '04, when Jackson was the first running back taken in the draft (at No. 24 overall) Faulk was 31 and showing the effects of multiple knee injuries and surgeries.

Jackson is 28. He turns 29 before the start of training camp, and shows no signs of breaking down physically. He has been sidelined by back problems and some soft tissue injuries over the years, but has been remarkably free of knee and ankle issues for the most part. He feels fresh, and thinks he's a better back entering his ninth NFL season than he was as a rookie out of Oregon State.

"My first few years in football professionally, I leaned heavily on just my talent itself," Jackson said. "Now I'm at the point where my physicality has not fallen off, and my mental (game) has really taken off by leaps and bounds in understanding the game of football. I feel like I'm right there. I feel like I'm in my prime. And I'm excited about what I can do in this offense."

"He's coached some unbelievable running backs," Jackson said. "Guys have had a lot of success in this offense under his leadership. So I'm looking forward to the challenge. And hopefully over the next few years while we're together I can put my name up there with the names of some of the other guys that have played for him."

Jackson knows he's closer to the end than the beginning of his NFL career, and he's determined to become one of the few running backs who prosper at age 30 and beyond.

"That's the new thing on my target," Jackson said. "Nearing the age of 29, you do hear the echoes and the whispers. Very few people have had success over 30 but I think about guys like Emmitt Smith that played a long time. Marcus Allen. Even Thomas Jones fairly recently ... he had a 1,400-yard season over the age of 30.

"So it's doable. I've just got to continue to make sure that I take care of myself the way I have, and continue to believe in myself. When people fail is when they start letting the outside interfere with their mentality and their confidence."

You can call his perspective biased, but Jackson would love to see the Rams take Oklahoma State wide receiver Justin Blackmon with their first-round pick. And in typical Jackson fashion, he isn't shy expressing his opinion on the topic.

"I believe Blackmon is an unbelievable talent," Jackson said. "I think he adds another weapon, especially for Sam (Bradford). We're all talking about Sam and what he can do, the tools that he has. But for us to see what he's fully capable of and see him blossom, we have to definitely give him weapons on the outside."

For those who knock Blackmon because he lacks elite speed, Jackson says: "I hate to say this on the record, but I will. Arguably, the best receiver in football is Larry Fitzgerald and he's not a blazer.

At running back, Jackson feels he still has some plays left in him. That's with — or without — Richardson.

No. 2 overall pick in 2009 has 'new outlook' as he makes comeback from major concussion.

Candidate to back up Bradford knows new system well.

Is Blackmon a must for Rams if he’s there at No. 6?

Rams will have many options, but our panel says OSU receiver is likely best way to go.

Rams Talk: Sound off about the Patriots game

Alabama running back Trent Richardson might be available to the Rams if they hold on to the No. 6 overall pick in the 2012 NFL Draft. (AP Photo)