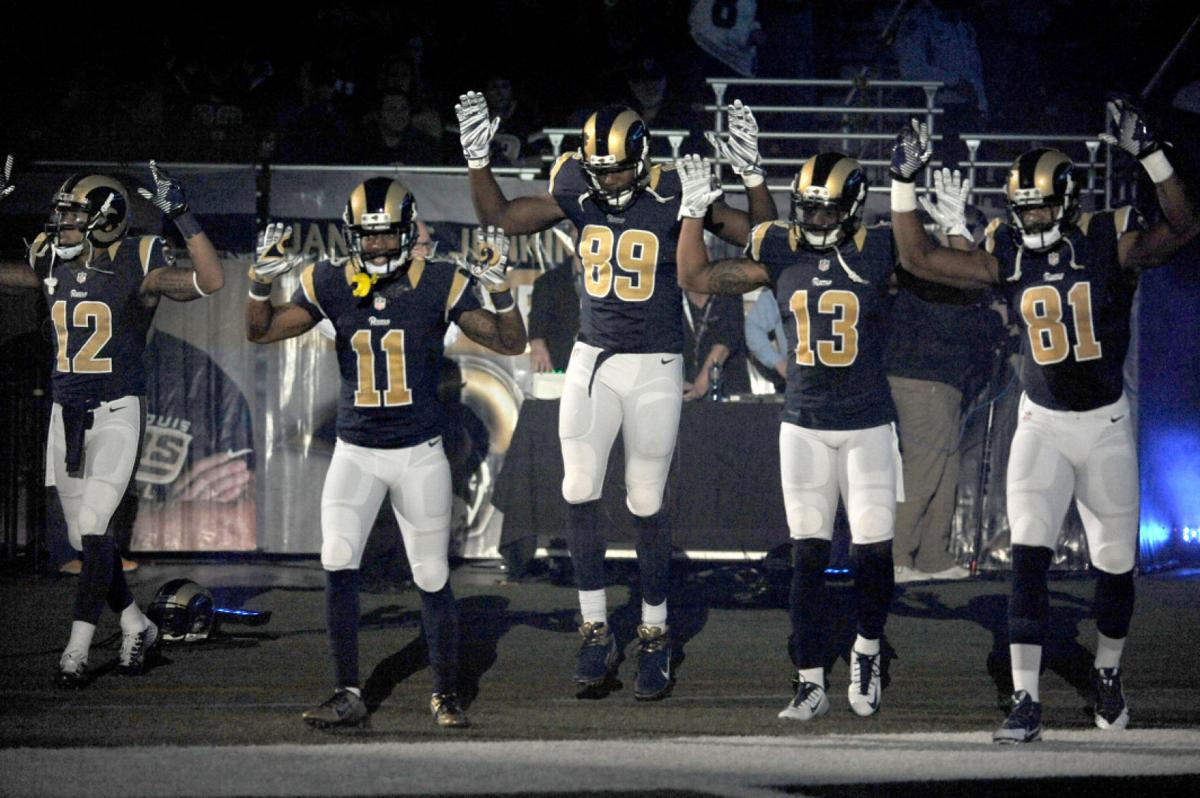 Members of the St. Louis Rams raise their arms in awareness of the events in Ferguson as they walk onto the field during introductions before their game against the Oakland Raiders on Sunday, Nov. 30, 2014, in St. Louis. AP photo. 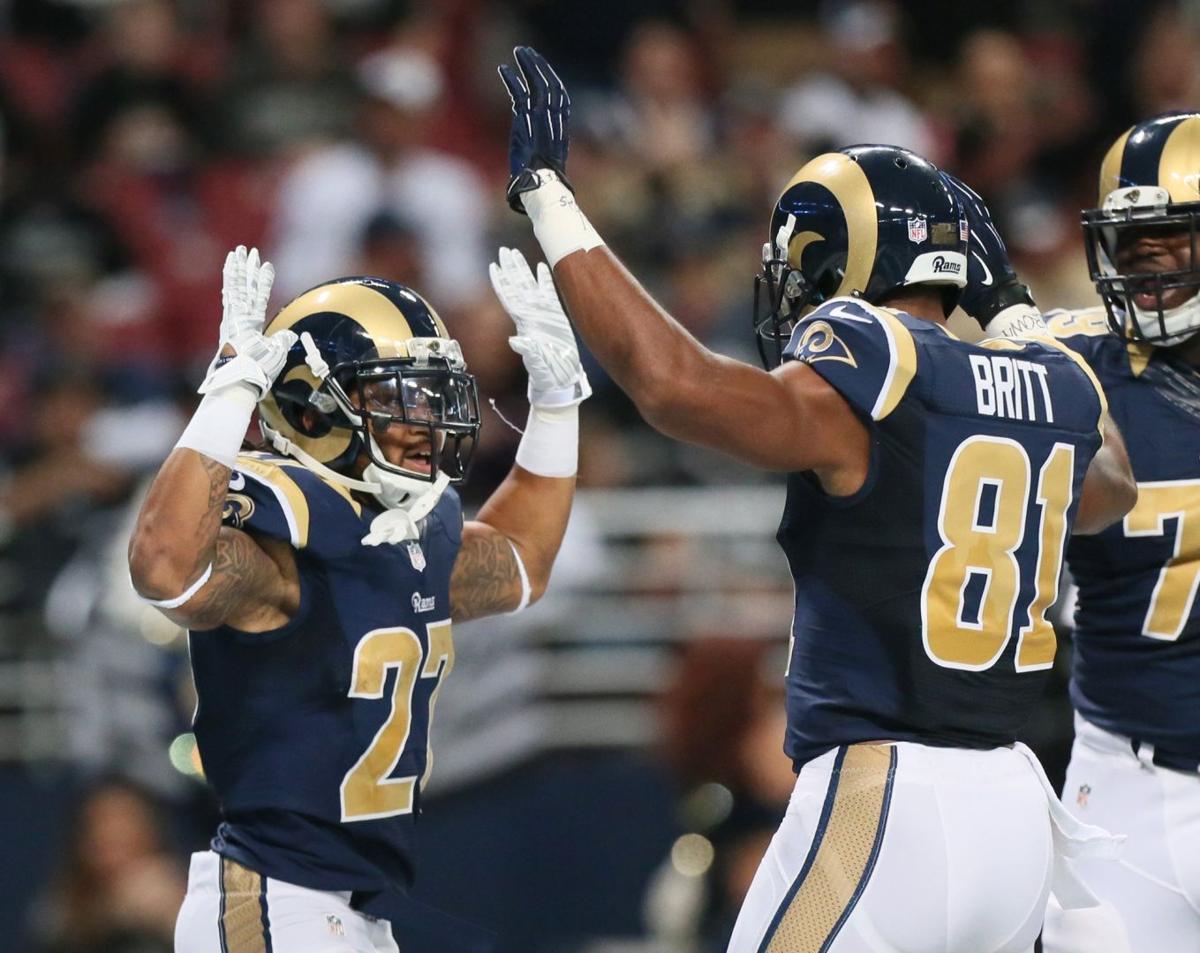 St. Louis Rams running back Tre Mason (left) and wide receiver Kenny Britt hold their hands up as they celebrate Mason's 35-yard touchdown reception in first quarter action during a game between the St. Louis Rams and Oakland Raiders on Sunday, Nov. 30, 2014, at the Edward Jones Dome in St. Louis. Photo by Chris Lee, clee@post-dispatch.com

ST. LOUIS • After releasing a scathing statement criticizing Rams players who made a “Hands Up, Don’t Shoot” pose as they came out of the tunnel for Sunday’s game against the Oakland Raiders, officials with the St. Louis police officers union have met with team officials and now don't want to discuss the matter publicly.

"We feel strongly that they better understand our perspective and the perspective of the law-abiding citizens that support law enforcement," Roorda said. "We're going to continue these conversations later this week and … we're going to hold off on any further public comments in the hopes that fruitful talks continue."

Meanwhile, at his regular Monday media session, coach Jeff Fisher declined to take questions on the "Hands Up" gesture made by the players.

"It's my personal opinion, and I firmly believe, that it's important that I keep sports and politics separate," Fisher said. "I'm a head coach. I'm not a politician, an activist, or an expert on societal issues. So I'm gonna answer questions about the game."

Fisher said all questions on the topic should be directed to Rams vice president of football operations Kevin Demoff. Demoff could not be reached immediately for comment.

Fisher said he has not spoken with the five players who made the "Hands Up" gesture, but will. He said the players "made the choice to exercise their free speech (Sunday)."

Fisher also said he will not discipline any of the players.

The players who made the now-familiar "Hands Up" gesture included Tavon Austin, Stedman Bailey, Kenny Britt, Jared Cook and Chris Givens. They hatched the idea before the game.

“Kenny Britt told me he was doing it, and some of the other guys were doing it,” Cook said. “So we all just hopped on the bandwagon and came up with the idea of how we were going to do it.”

On Sunday, Fisher said he didn’t see the gesture and was unaware of it.

“I didn’t know anything about it. I was still in the tunnel,” Fisher said.

Britt said he didn’t want to bother Fisher before the game by telling him of the plans.

The “Hands Up” gesture has been used by protesters upset over the fatal shooting of teenager Michael Brown. Britt said it wasn’t used by the receivers as an indication that they were taking sides.

“No, not at all,” Britt told reporters. “ ... We just wanted to let the (Ferguson) community know that we support them.”

The St. Louis Police Officer Association criticized the players' action in a statement Sunday night, saying it was “profoundly disappointed” in the gesture. Roorda said “it is unthinkable that hometown athletes would so publicly perpetuate a narrative that has been disproven over-and-over again.”

The St. Louis Police Officers Association has called on the NFL to publicly apologize and discipline the five Rams players who stood with their hands raised before Sunday's game. Roorda was set to meet with the Rams Monday afternoon to discuss the issue.

The officers' association released a statement Sunday that said it was "profoundly disappointed" with the players, whose gesture it considered "tasteless, offensive and inflammatory."

"I know that there are those that will say that these players are simply exercising their First Amendment rights," Roorda said. "Well, I've got news for people who think that way, cops have first amendment rights too, and we plan to exercise ours."

NFL spokesman Brian McCarthy gave a one-sentence response. "We respect and understand the concerns of all individuals who have expressed views on this tragic situation," he said in an email Monday.

Cook, of the Rams, said something has to change in terms of relations between police officers and African-Americans.

“Whatever happened from both sides, there has to be some kind of change,” Cook said. “That’s not cool, you know. I think President (Barack) Obama said it best: People aren’t coming up with these complaints for no reason. People aren’t saying these things just to make it up.”

In the wake of the grand jury decision not to charge Ferguson police officer Darren Wilson in the shooting of Brown, and the subsequent arson and looting, Fisher discussed the situation during a team meeting Wednesday.

Several Rams players indicated during the week that they hoped to “win one for Ferguson” against the Raiders. The response Sunday was a 52-0 victory, the second-most lopsided victory in Rams franchise history.

“I think that the store owners that were looted, you feel for them and what they’re going through,” linebacker James Laurinaitis said. “You feel for the kids that had school canceled. You just want things to get back to normal as soon as possible.

“However long that road is, hopefully today for three and whatever hours was kind of a little bit of relief so people could just take their minds off of the situation and enjoy some Rams football.”

The Associated Press and Joe Holleman of the Post-Dispatch contributed to this report.

Rams players who made 'Hands Up' gesture give away toys, food

They donate $10,000 to spread goodwill to children in North County.

Members of the St. Louis Rams raise their arms in awareness of the events in Ferguson as they walk onto the field during introductions before their game against the Oakland Raiders on Sunday, Nov. 30, 2014, in St. Louis. AP photo.

St. Louis Rams running back Tre Mason (left) and wide receiver Kenny Britt hold their hands up as they celebrate Mason's 35-yard touchdown reception in first quarter action during a game between the St. Louis Rams and Oakland Raiders on Sunday, Nov. 30, 2014, at the Edward Jones Dome in St. Louis. Photo by Chris Lee, clee@post-dispatch.com