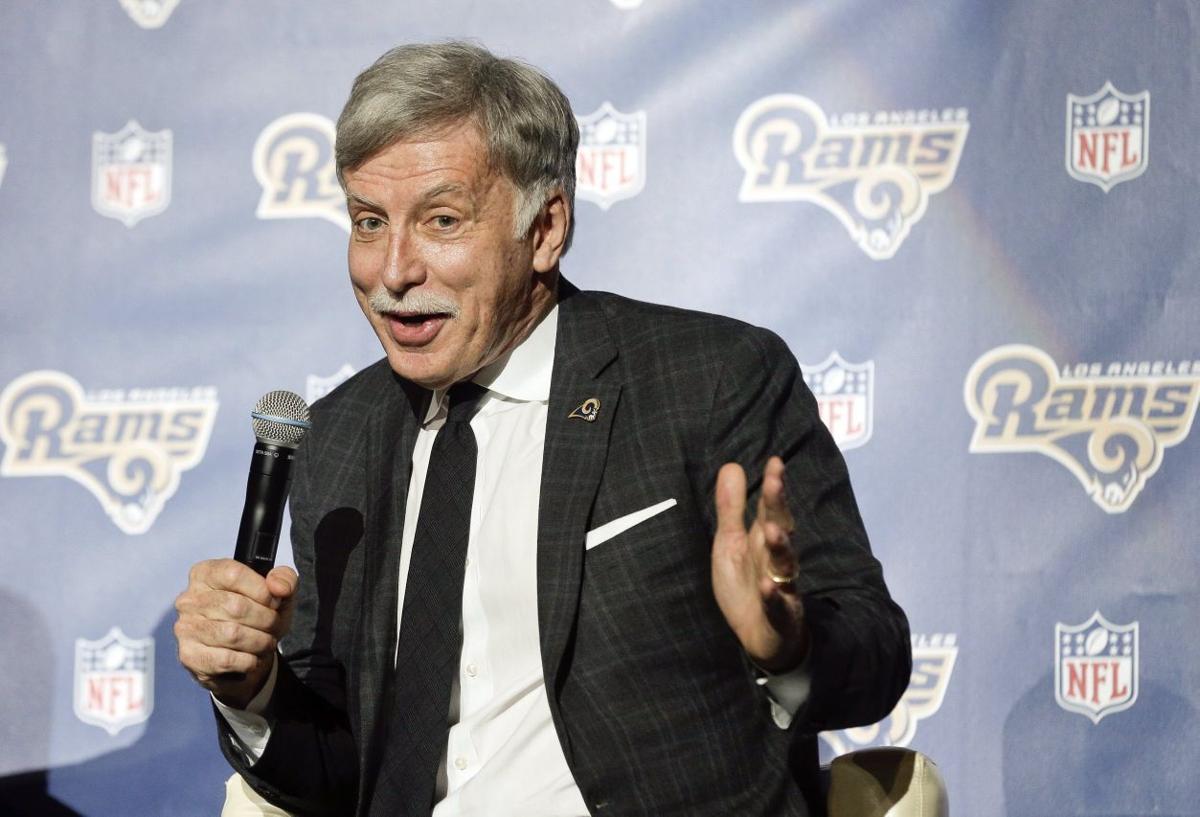 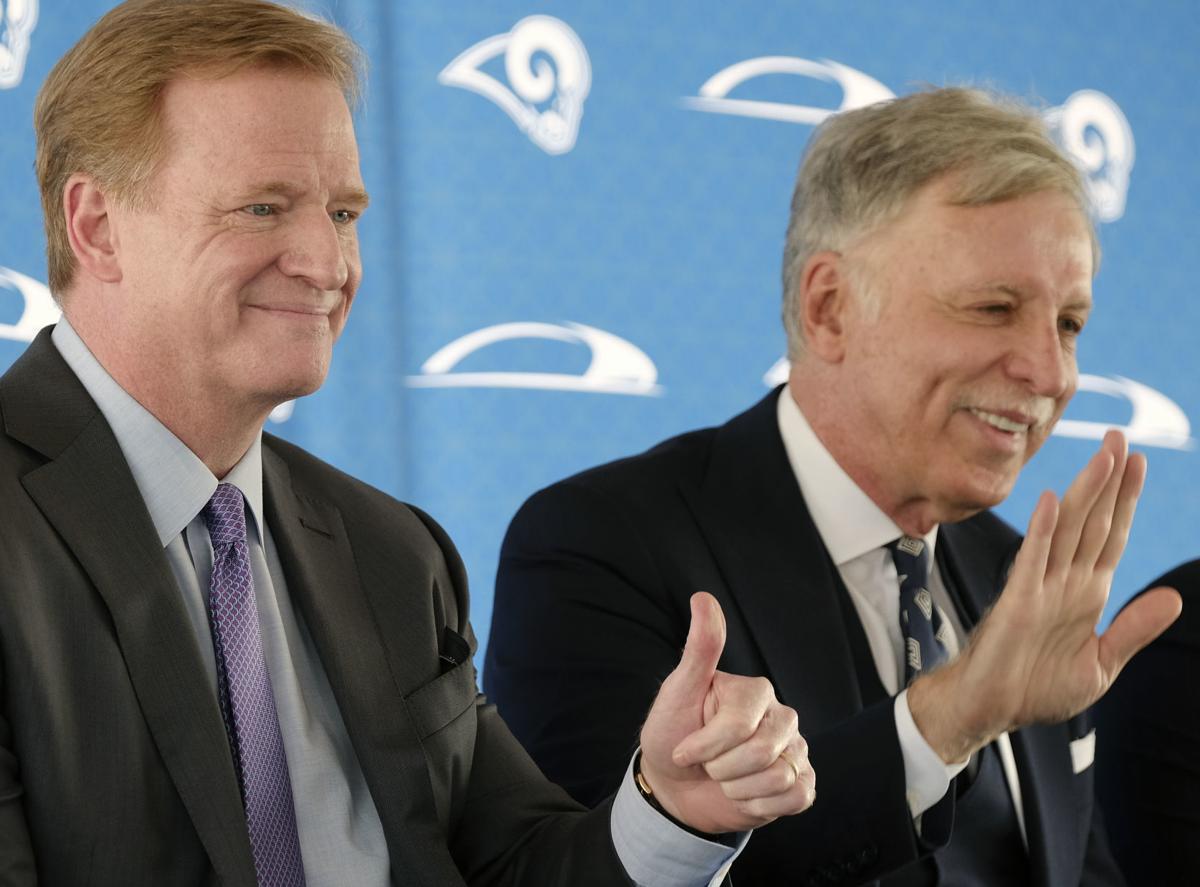 ST. LOUIS • The city, the county and the Regional Convention and Sports Complex Authority are suing the National Football League over the relocation of the Rams 15 months ago.

The 52-page suit filed Wednesday in St. Louis Circuit Court lists the National Football League and all 32 NFL clubs as defendants and seeks damages and restitution of profits.

“The Rams, the NFL, through its member teams, and the owners have violated the obligations and standards governing team relocations” because the Rams failed to meet league relocation rules, the suit claims. As such, the league has breached its contractual duties owed the plaintiffs, the suit says.

The Rams and the NFL made intentionally false statements, unjustly enriched themselves, the plaintiffs say, and interfered with business expectations.

“There is no legitimate basis for this litigation,” Brian McCarthy, NFL vice president of communications, said via email. “While we understand the disappointment of the St. Louis fans and the community, we worked diligently with local and state officials in a process that was honest and fair at all times.”

The Rams, through a spokesperson, said the team did not comment on pending litigation.

The suit claims St. Louis has lost an estimated $1.85 million to $3.5 million a year in amusement and ticket tax revenue with the departure of the Rams. It says the city also has lost about $7.5 million in property tax and $1.4 million in sales tax revenue, plus “millions” in earning taxes.

Although it doesn’t provide dollar amounts for St Louis County, the suit says the county has lost out on hotel tax, property tax, and sales tax revenue because of the departure of the Rams.

The suit contains five counts, or causes for action:

• Breach of contract (against all defendants).

• Unjust enrichment (against all defendants).

• Fraudulent misrepresentation (against the Rams and team owner Stan Kroenke).

• Fraudulent misrepresentation (against all defendants).

• Tortious interference with business expectancy (against all defendants except the Rams). This last count basically alleges that the NFL and the other 31 teams “intentionally interfered” with the business relationship between the St. Louis plaintiffs and the Rams by approving the relocation.

The league’s relocation rules were established in 1984 in response to a court recommendation to the NFL to avoid antitrust liability. The rules call on teams to work diligently and in good faith to remain in their home community, stating that teams cannot relocate unless the relocation policy is satisfied.

The suit lists three pages of examples in which the Rams “made false statements regarding the team’s intent to engage in good faith negotiations.”

Included is part of a 2010 Post-Dispatch interview with Kroenke in which he said: “I’m going to attempt to do everything that I can to keep the Rams in St. Louis. I’ve always stepped up for pro football in St. Louis. ... People in our state know me. People know I can be trusted.”

Another example came in 2014 from Rams executive Kevin Demoff after Kroenke bought land in Inglewood, Calif., that became part of the eventual site of the LA Rams’ proposed stadium: “I promise you, Stan is looking at lots of pieces of land around the world right now and none of them are for football stadiums.”

The suit details work the plaintiffs did, “in reliance” on such statements on St. Louis’ riverfront stadium project on the north side of downtown. Included was the assembly of land for the stadium site, hiring of architects, consultants and lawyers.

Those costs totaled more than $16 million after the NFL approved the Rams’ relocation on Jan. 12, 2016, according to Post-Dispatch reports.

“A significant amount of taxpayer money was spent attempting to satisfy the criteria established by the NFL to keep the Rams in St. Louis,” outgoing Mayor Francis Slay said in a statement. “NFL representatives misled local officials by representing that the NFL would adhere to its requirements.

“Although St. Louis stepped up with an outstanding stadium proposal and its fans always supported a historically bad Rams team, the NFL failed to keep its word and allowed the Rams to move. The league and the owners made hundreds of millions from the Rams move and in the process betrayed a legion of diehard football fans and public officials who attempted to deal with the NFL in good faith.

“The NFL needs to pay for its conduct.”

The suit further cites a Demoff interview given to Los Angeles media during which he said he “always dreamed that he could be part of bringing the NFL back to Los Angeles” and said Kroenke told him in the summer of 2013 that he had found “an unbelievable site” for a football stadium in the Los Angeles area. Namely, the Inglewood site.

The suit was filed Wednesday by the Clayton law firm of Blitz, Bardgett and Deutsch and has been in the works for about two years. Even before the relocation vote, information was being gathered for a potential suit. Another Clayton firm, Dowd Bennett, was co-counsel in the suit.

Lawyer Bob Blitz was part of the effort to build the north riverfront stadium and keep the Rams in St. Louis. Among those $16 million in expenses in the St. Louis stadium effort, at least $900,000 is owed the Blitz law firm according to past Post-Dispatch reports.

Slay spokeswoman Maggie Crane said both law firms were working on a contingency basis. They will be paid only if they win the suit.

After 21 seasons with the Rams in St. Louis, Kroenke received approval from the league to return the team to southern California, using a first-tier provision in the stadium lease at the former Edward Jones Dome as his escape clause.

The clause required the state of Missouri, city of St. Louis and St. Louis County to renovate the Dome — at a cost of about $700 million — up to the league’s “first tier,” or top eight stadiums.

Local officials declined, and, as prescribed in the lease, the Rams went year-to-year at the Dome.

The team played its first season back in Los Angeles in 2016 at Memorial Coliseum, finishing with a 4-12 record. The new Inglewood stadium, scheduled to cost $2.6 billion, is scheduled to open in 2019.

Wednesday’s suit is just the latest in a series of legal actions taken by various parties in St. Louis against the Rams since relocation was approved.

Three separate lawsuits regarding PSLs, or personal seat licenses, have been consolidated into one in which fans are seeking either refunds on PSL deposits or the right to buy season tickets in Los Angeles.

Another suit stems from fans claims the Rams violated the Merchandise Practices Act by selling tickets and team merchandise while planning a move to a new market.

And in yet another, the Regional Convention and Sports Authority seeks to block the Rams from buying the former practice facility in Earth City — once known as Rams Park — for $1 in 2024, as set forth in the team’s original stadium lease.

Longtime Rams linebacker hopes to try the broadcast booth next.

Lawsuit against Rams, NFL mired in evidence disputes ahead of October trial in St. Louis

Trial remains set for Oct. 25 despite a hold on jury trials in St. Louis since March because of the pandemic.

A question the NFL has dodged since the scam is coming up again: What happened to the relocation guidelines?

Nearly a full page in the St. Louis relocation lawsuit is devoted to the Cowboys owner and what the suit claims is his intentional interference with the plaintiffs' business relationship with the Rams.

In lawsuit contesting Rams' relocation, the St. Louis parties as plaintiffs list what they claim are false statements regarding team's intent to engage in good-faith negotiations.

Thomas: Relocation for dollars is a recurring theme in NFL

The city and St. Louis County sued the NFL on Wednesday, April 12, 2017, over the Rams moving to Los Angeles.

Looking back: Glory days at the Dome

From "Greatest Show On Turf" blowouts to the NCAA Final Four to a show-stopping performance by soccer great Ronaldo, STLtoday.com looks back a…

BenFred: Suit against NFL is a long shot worth trying

Maybe Stan Kroenke and his cronies won’t get off scot-free after all.

Lack of college experience could slow North Carolina QB's development at next level.