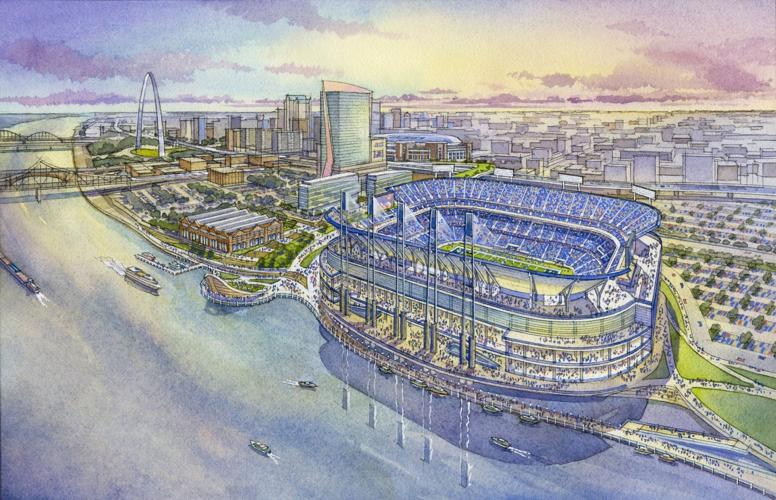 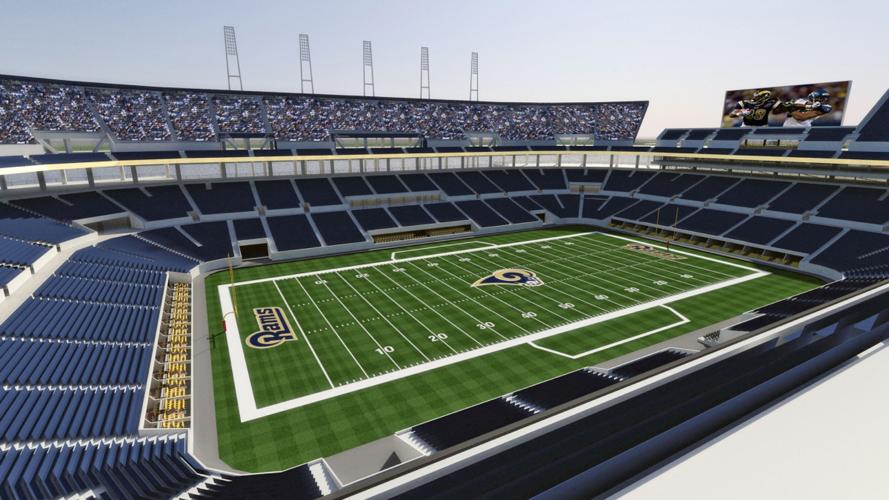 A cross-section of the proposed site for a new St. Louis NFL stadium between Interstate 44 and the Mississippi River. Credit: HOK | 360 Architecture 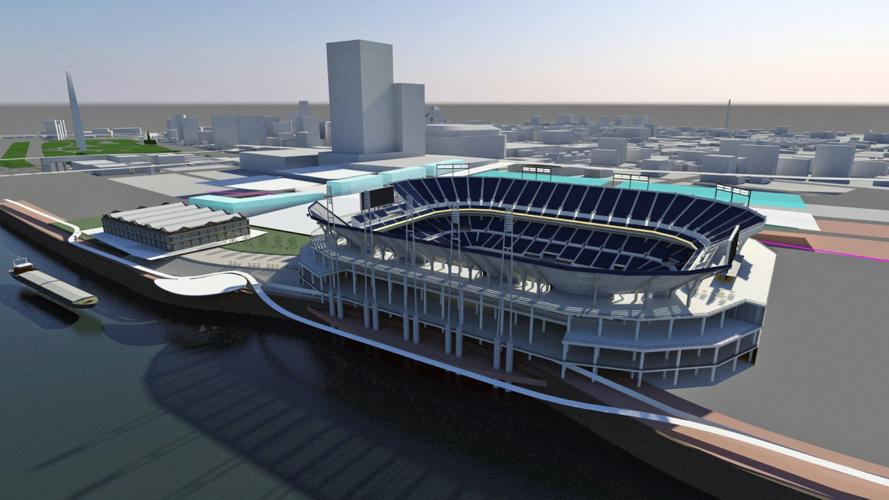 The St. Louis stadium/Rams relocation saga reached another milepost Friday with the unveiling of a stadium project on the north edge of downtown that would cost between $860 million and $985 million.

For now, the proposal presented at Union Station by Dave Peacock and Bob Blitz is the life raft that’s keeping NFL football afloat in St. Louis.

“I think to the degree that we progress on a plan and demonstrate the viability of it, we’re in good shape — the community — because the NFL bylaws have certain stipulations that relate to moving and relocation that we will have met in the local community,” said Peacock, who with Blitz was appointed by Gov. Jay Nixon to develop a plan to keep professional football in St. Louis.

But if the situation reaches the level where the Rams are lobbying with the league to move to Los Angeles, two areas are almost certain to be discussed:

• Is the St. Louis effort to address its stadium situation a case of too little, too late?

• Is there sufficient support in the business community and corporate sector to keep the Rams profitable and viable in St. Louis?

Peacock, a former Anheuser-Busch executive, seemed almost eager to address both topics during an hour-long presentation and news conference.

“We have a sense of urgency,” Peacock said. “But I can tell you, San Diego’s been slogging away for years trying to get a stadium and has not been able to achieve it. The Minneapolis project took several years. Atlanta. San Francisco.

“If we are actually able to raise the financing and start a project in 2016 based on where we started, this would be lightning speed in the stadium world relative to what’s been done at other places.

“So I don’t necessarily buy the too little, too late. Because if you also read the NFL bylaws, they’re very clear that they don’t have a time parameter associated with them. They basically say that the team has to exhaust all of its opportunities in the local market before it can move, and that no team can move just for the opportunity to make more money. I believe in those NFL bylaws.”

Although the Rams have said next to nothing during the entire stadium process, the team’s statement in response to Friday’s unveiling of the stadium plan spoke volumes. It read in part:

“The St. Louis Rams have worked for many years, with several agencies and commissions, and their senior management, responsible for stadium facilities in St. Louis. This includes multiple discussions with the Governor (Jay Nixon)’s recently formed NFL Task Force (Peacock and Blitz) ...”

It may sound like bureaucratic jibberish at face value, but the underlying point is that the Rams want it known that they’ve been working hard at a stadium solution for “many years” with no success. While also pointing out that the task force is “recently formed.”

It’s a message designed as much for the league office and the 31 other franchise owners as it is for St. Louis. And those franchise owners could be voting on relocation as early as spring 2016.

Meanwhile, as of Monday, Rams owner Stan Kroenke has already reached an agreement to build a stadium in Inglewood, Calif., not far from the Los Angeles airport.

As this scenario unfolds, the Rams’ argument at league meetings and behind the scenes is expected to include questions about the “sense of urgency” by St. Louis. One question that may have already been posed by the Rams in league circles: Why wasn’t this task force formed after the arbitration decision in January 2013?

Peacock said Friday he has been working on the stadium project “off and on” for more than a year, and has been doing intensive work over the past three months.

Providing examples of the level of activity, Peacock said there was a meeting with league officials in November shortly after the formation of the task force. He said there have also been meetings that involved both Rams and NFL officials together, as well as what he called “constant contact” with both entities.

Peacock also confirmed what previously had been reported through sources, namely, that Kroenke had yet to meet directly with the task force.

“I have not met, nor has Bob met Stan,” Peacock said. “I’m sure he’s seen these (stadium plans) because they’ve been shared early on in the process. I don’t know the impact or his reaction, because we haven’t met with him.”

It should be noted that Peacock said he has yet to meet formally with NFL commissioner Roger Goodell so far in this process.

“I’m sure we’ll meet with Stan Kroenke when the time is right,” Peacock said. “His representatives have represented him well. At the same time we’re dealing with the right people at the league and we’ve been given, I’d say, the right level of support to continue on our path.”

As for the question of business and corporate support, the NFL relocation guidelines specify that a team requesting to move must demonstrate it has exhausted all opportunities to be successful in its market. A perceived lack of corporate support is an area the Rams are expected to attack as battle lines are drawn in the team’s increasingly apparent attempts to relocate.

“I like to deal in fact and data,” Peacock said. “The facts are half of the NFL teams play in cities with less Fortune 1000 companies than St. Louis has. We have seven of the top 200 private companies in the country.

“From just an economic standpoint, about 13 teams play in cities with a smaller GDP, if you will, or economy, than St. Louis. So it’s hard for me to say we don’t have the business support or the capability of business support.”

Creativity and hope: How St. Louis will fund a $985 million football stadium

Now stadium advocates need to pin down details, experts said. They need to secure funding. They need a realistic plan to buy land on the north riverfront.

Progress is relative for Rams

General manager Les Snead says talk is getting old about being respectable.

Readers sound off: Kroenke is a 'bloodless owner'

KROENKE IS MAN WHO WOULD BE KING

Commentary: A little love for our ‘dump’ of a Dome

Columnist again stands up for Rams fans, saying the team has done little to warrant the strong support they've been given here.

Nicklaus: Stadium may sparkle, but it's not an investment

Perhaps a more telling consequence of the team's potential lame-duck status could be home-field advantage – or lack thereof.

Jones says Kroenke has the right to move

Cowboys owner says Rams can relocate to Los Angeles even without NFL approval.

A cross-section of the proposed site for a new St. Louis NFL stadium between Interstate 44 and the Mississippi River. Credit: HOK | 360 Architecture