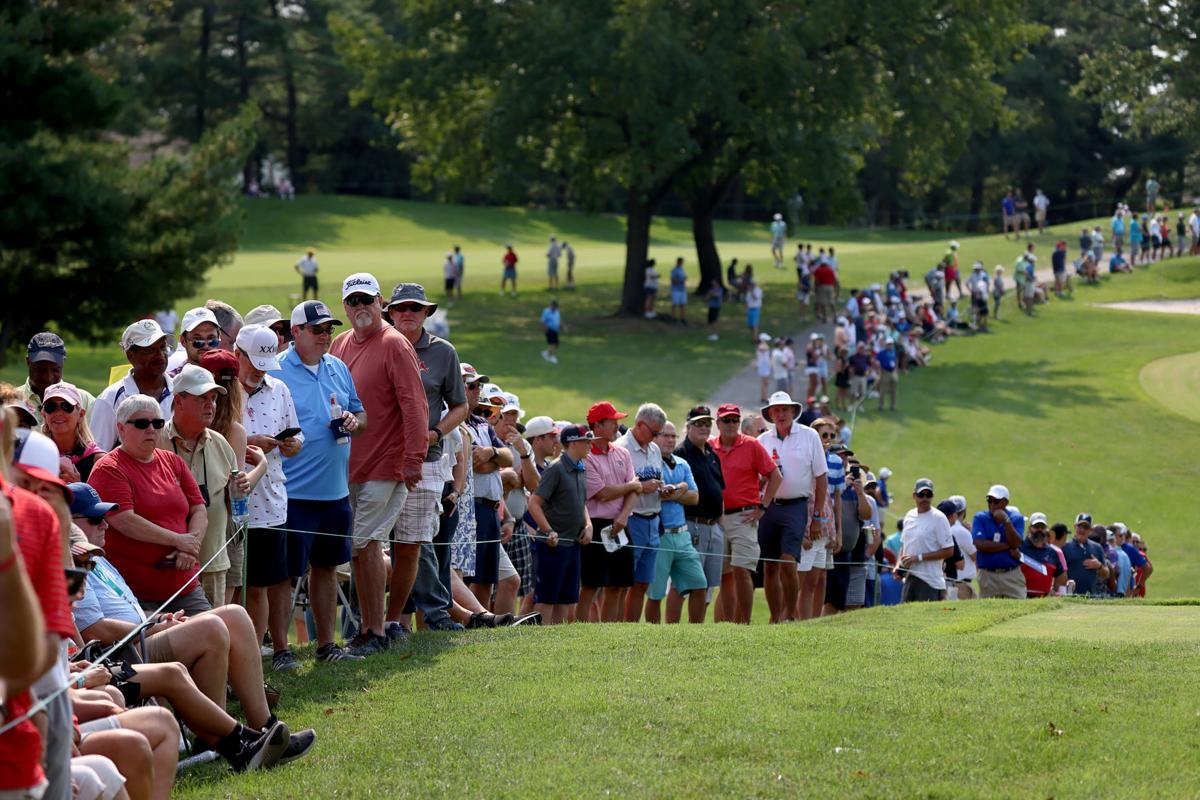 Golf fans turned out through the weekend for the Ascension Charity Classic at Norwood Hills Country Club. in Jennings.

Officials thought they were being aggressive when they predicted a three-day crowd of 30,000 for the Ascension Charity Classic.

Anything over 20,000 for a PGA Tour Champions event — especially a first-year tournament — would be a good launching point at Norwood Hills Country Club, which will host for four years.

The crowd hit 18,000 on Saturday and 17,000 on Sunday, making the largest attendance of the season on the tour. The four-day total was 51,000, which also was a record for a first-time event.

“There was a pretty good crowd for the pro-am. That doesn’t happen anywhere, maybe the PGA Tour,” said golfer Paul Goydos. “It seems like the community’s really behind it. Players are nice, but you need community desire and you need club desire. It seems like that’s over the top.”

A crowd of 4,000 attended the pro-am on Thursday before the tournament started with 12,000 on Friday and built to the weekend.

Some players took note of the fans as they played, especially on holes where people were allowed to be closer on tee shots and around the greens.

“The whole setting is like Des Moines,” Doug Barron said, “and I had a good feeling in Des Moines. There’s a lot of drinking going on out there, but they’re having fun. I mean, that’s what we’re out here for.”

Jim Furyk seemed to be taking mental notes on everything he saw. He has his own tournament he’s planning and actually showed up one day later in St. Louis than many players because he was doing some work on the event.

He mentioned that the tournament had more bleachers for fans built around holes than many tournaments.

“St. Louis fans are great, coming out in droves,” Furyk said. “It’s a nice build-out and there’s a bunch of hospitality tents. So, it’s kind of a thriving sports community.”

Close call for HaasJay Haas, 67, from Belleville, Ill., did his best to make the tournament his own personal homecoming celebration and nearly pulled it off. Haas had rounds of 68, 69 and 67 to finish 9 under and one stroke off the lead.

He birdied the final hole and then waited to find out if others would falter to sneak into a playoff but that opportunity didn’t materialize. Ultimately, the feeling he had when the crowd cheered his final birdie was a fitting finish.

“That was pretty cool,” he said. “I looked over at my wife and a bunch of people were cheering and pulling for me. It was nice to be in the hunt the whole week. It’s what we play for and hopefully there’s more.”

The biggest challengeThe most difficult hole at Norwood Hills on Sunday was the par-4 No. 9, which averaged 4.43 strokes and produced 32 bogeys and three double bogeys with only three birdies.

The sloping green made for some treacherous moments as players who hit the front of the green saw their ball roll backwards into the rough, and many watched putts that were too strong slide down the backside.

Players had the most success Sunday on No. 8, a par-5 that averaged nearly a half stroke under par with 44 birdies.

The Americans have won back the Ryder Cup, sending a strong message to Europe with a powerful performance from their youngest team in history.

NAPA, Calif. (AP) — Max Homa’s decision to give up his popular and often comical golf podcast to concentrate on his game already is paying off.

He can’t clone Jon Rahm. He can’t make any last-minute substitutions. He can’t sneak up and cut the laces on the Americans’ golf shoes or supe…

Column: No Tiger, No Phil. And maybe a US Ryder Cup win

Tiger Woods won’t be at Whistling Straits this week, for obvious reasons. Phil Mickelson will, but for the first time since 1995, he won’t hit…

SHEBOYGAN, Wis. (AP) — Americans hit three unforgettable shots on the opening day of the Ryder Cup and two went for naught. Turns out they did…

McIlroy sits out then suffers during dismal Ryder Cup

SHEBOYGAN, Wis. (AP) — The American crowd knew where it hurt Europe the most.

The Latest: DeChambeau makes a promise to 'Cheeseheads'

SHEBOYGAN, Wis. (AP) — The Latest on the Ryder Cup, the golf showdown between the United States and Europe (all times local):

Sport's biggest secret: Names in the envelopes at Ryder Cup

SHEBOYGAN, Wis. (AP) — Shane Lowry tried to navigate his way down one of the hundreds of steep, slick hills that make Whistling Straits a mena…

Golf fans turned out through the weekend for the Ascension Charity Classic at Norwood Hills Country Club. in Jennings.