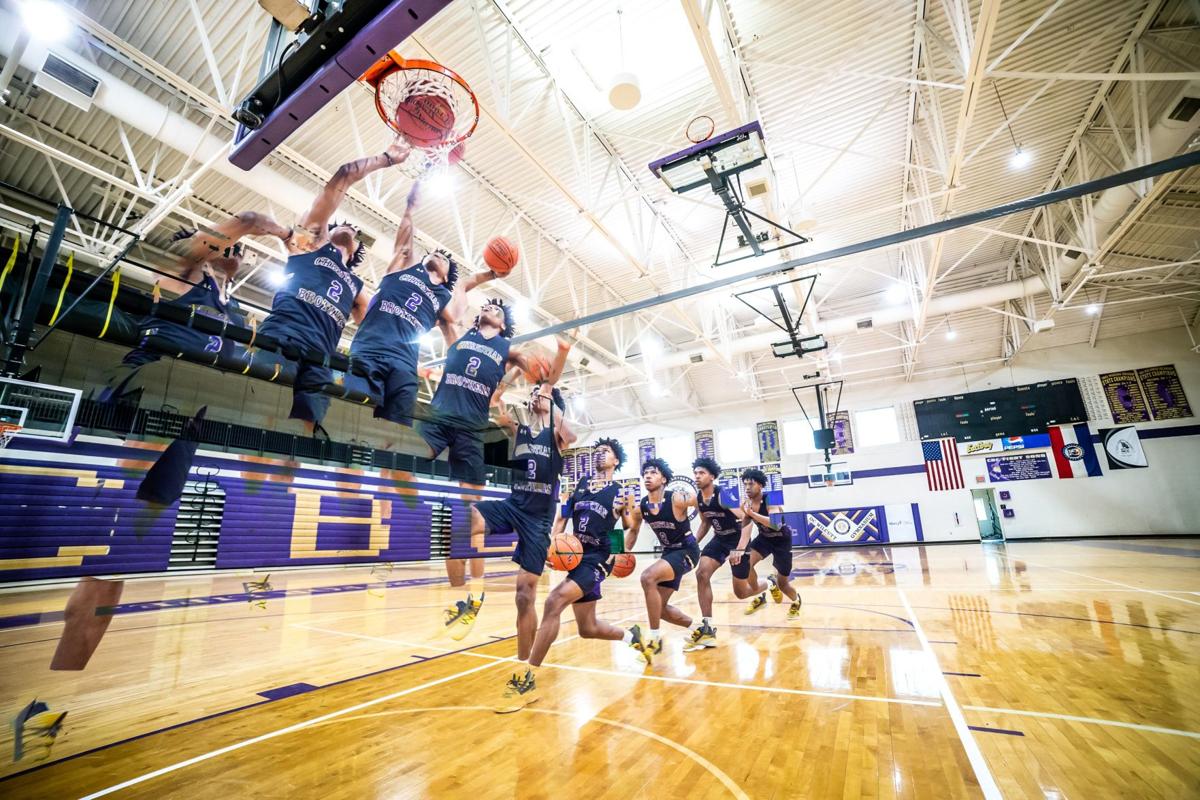 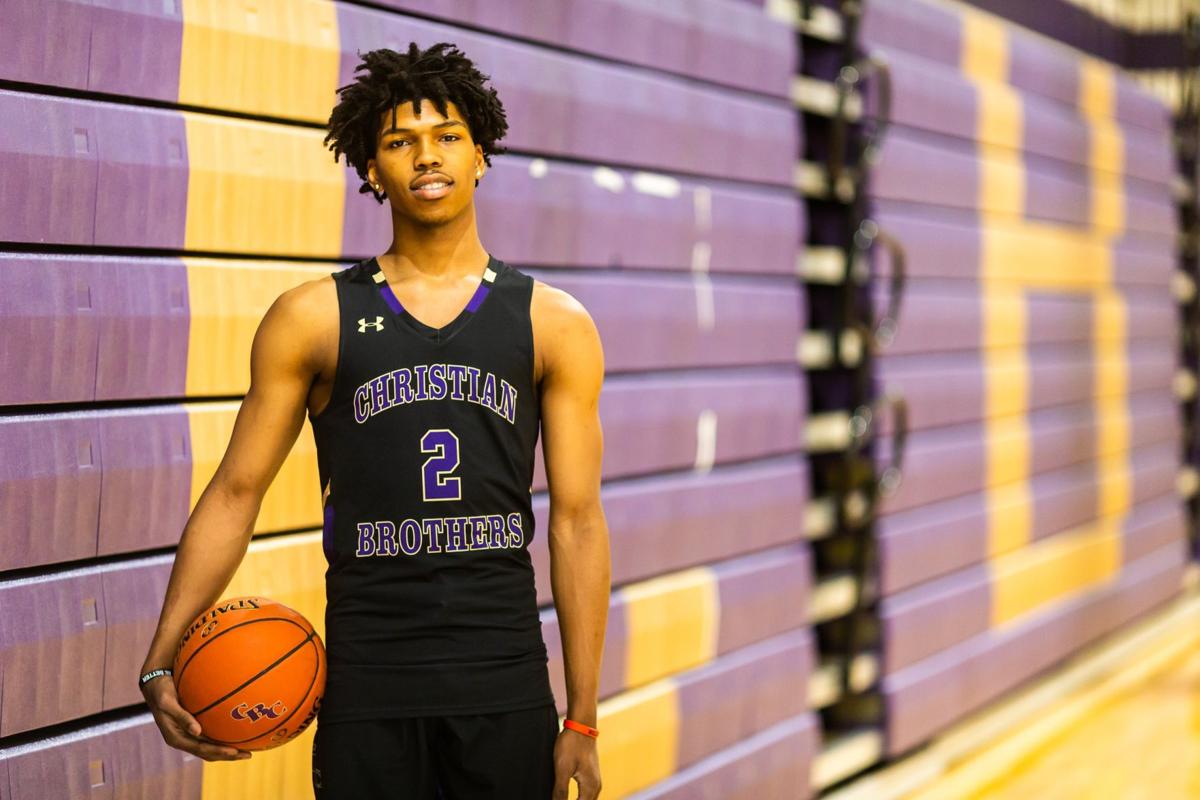 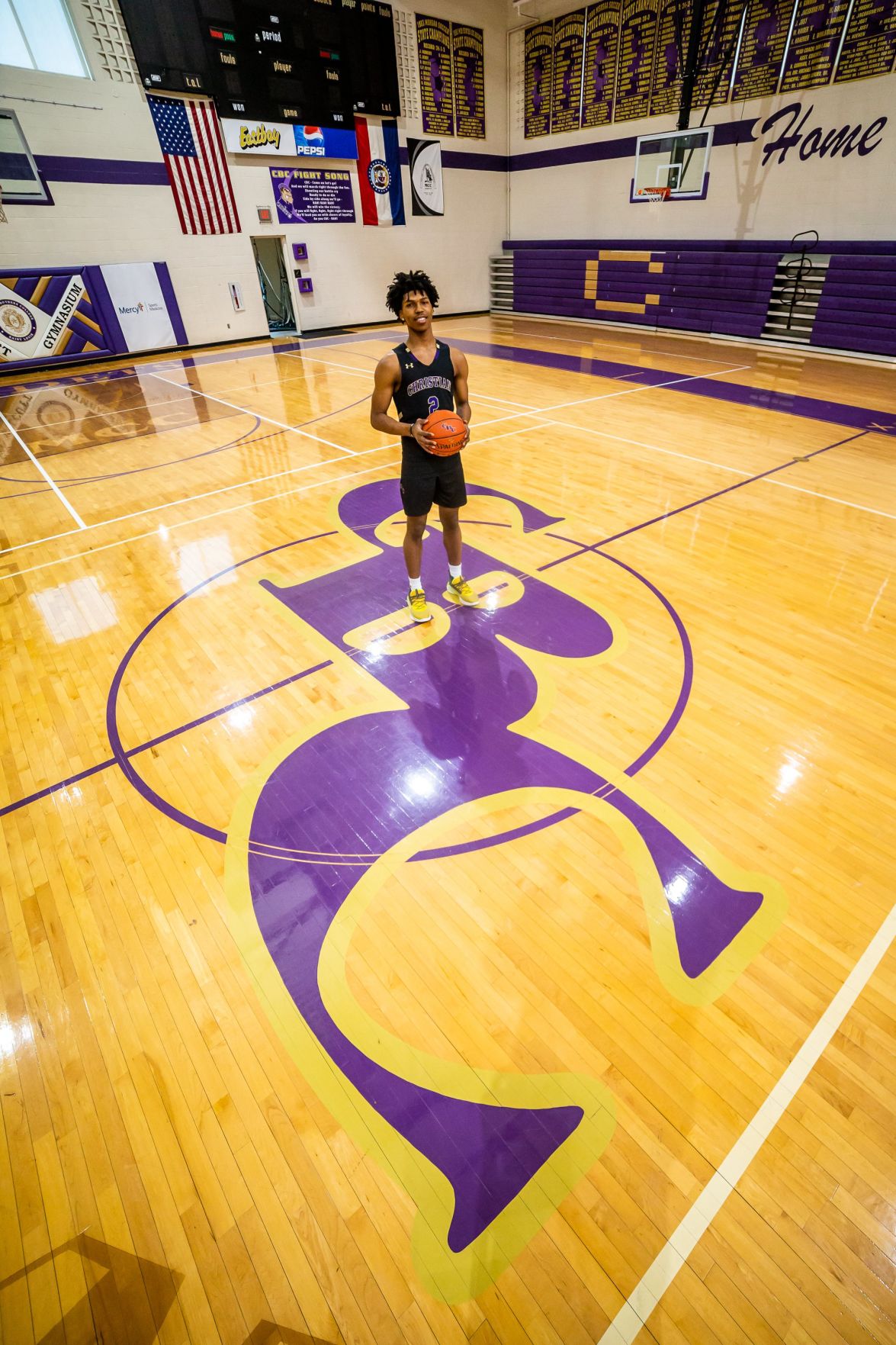 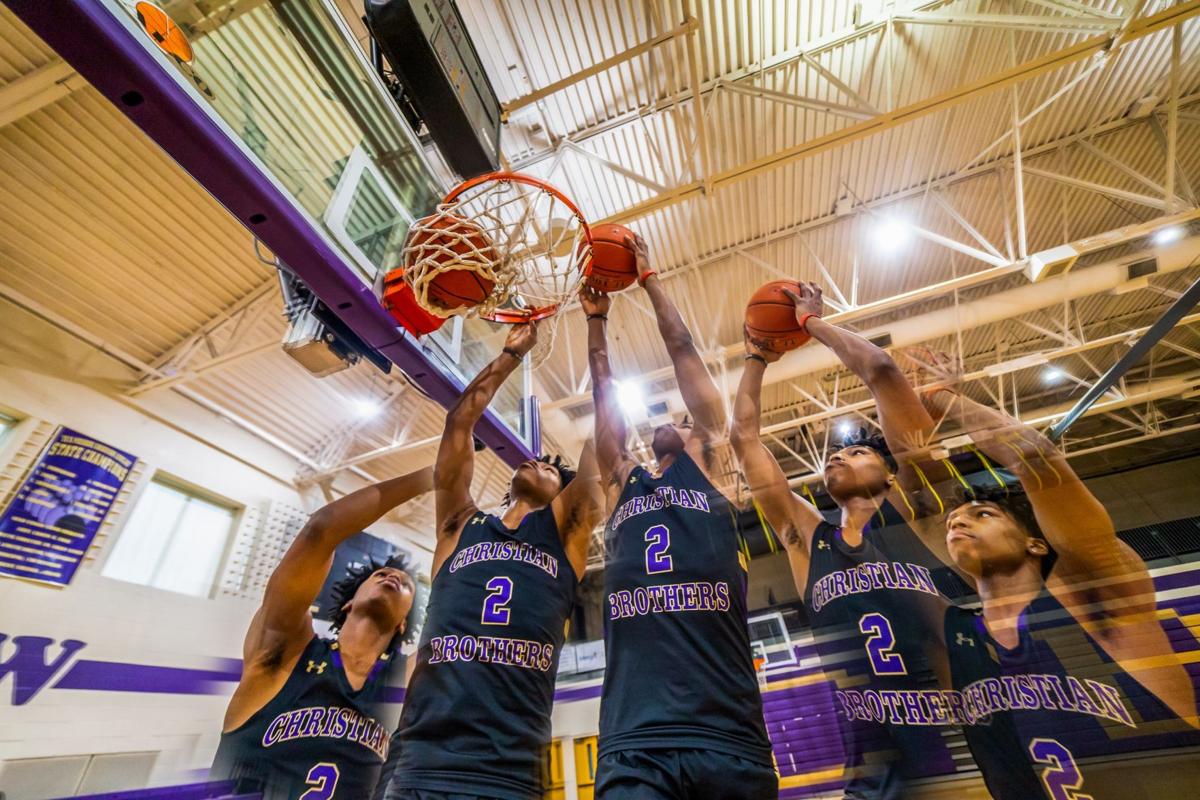 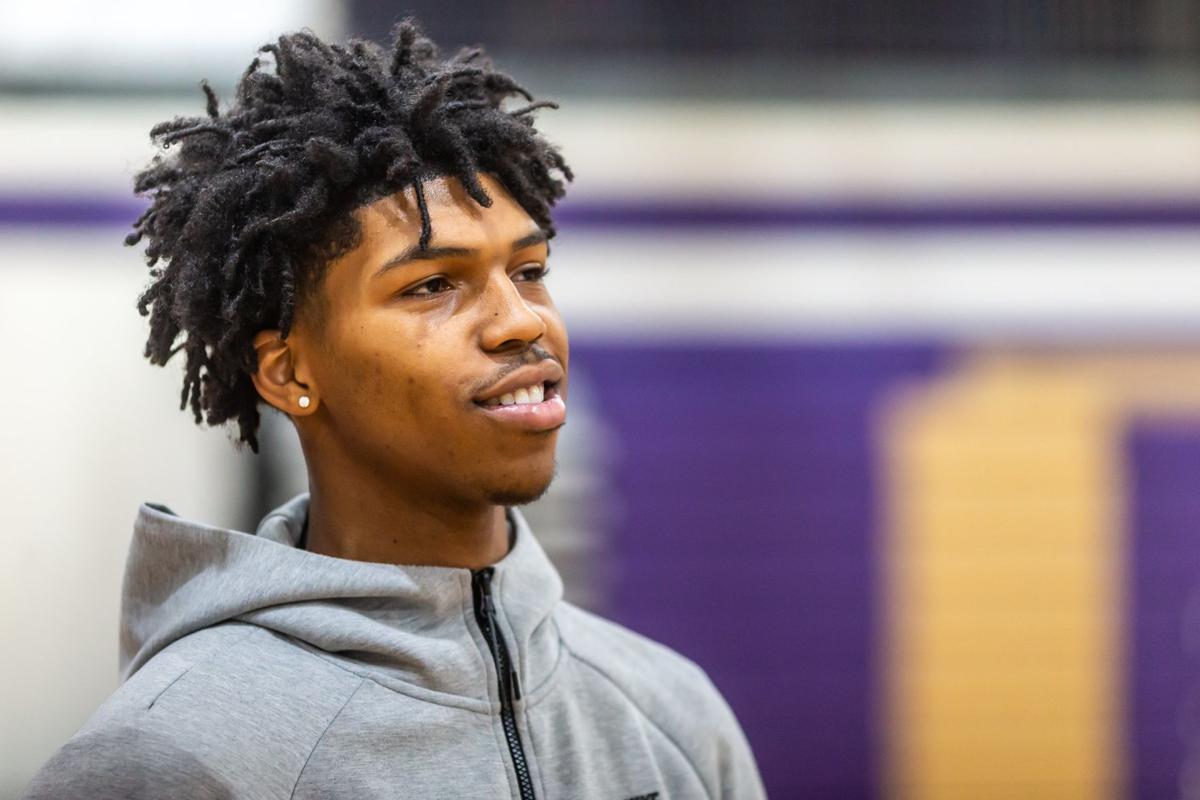 Everything he worked for was lost.

The CBC basketball team’s star guard, Love’s senior season was halted abruptly by the coronavirus pandemic that has wreaked havoc around the world.

As an eighth-grader, Love set goals for his high school career. He wanted to be a McDonald’s All-American, a Jordan Brand All-American and a Team USA selection for the Nike Hoop Summit, an international all-star game.

He achieved all of them but will never know what it’s like to be one. All of the all-star showcases were canceled while Love led the Cadets on another deep run in the Class 5 postseason.

“When all those are taken away it’s tough because you’ve been working for that all your life,” Love said. “You get those and you’re not able to participate in those. It’s just tough. It’s real heartbreaking. Not so much to play in the game but just actually being there and experiencing it.”

As the all-star games melted away, the 6-foot-4 Love still had one remaining goal on his list, the biggest of the bunch.

He wanted a ring.

A year after CBC finished as the Class 5 runner-up to Rock Bridge, Love was on a mission to get the Cadets back to the final game and finish the job with their first state championship since 2014.

The virus took that away, too. Two days after Love led CBC to a 62-53 win over Francis Howell in a quarterfinal, the Missouri State High School Activities Association announced the Class 5 and 4 tournaments were canceled before the semifinal and championship games were played. The last high school tournament in America was through, and so was Love’s time at CBC.

“It’s been tough for me,” Love said. “We’ve been working for it and we were supposed to be practicing that (Monday) morning. Then Coach (Justin) Tatum called me and told me it was over with.”

An incomplete season did not stop Love from garnering the most prestigious honors that can be bestowed upon a senior. He was named Mr. Show-Me Basketball and the Class 5 player of the year by the Missouri Basketball Coaches Association. He was tabbed the Missouri Gatorade player of the year. His lengthy list of all-American recognition make him the area’s most awarded player since Chaminade’s Jayson Tatum in 2016.

Love is the Post-Dispatch All-Metro boys basketball player of the year.

He’s the first CBC player to earn the distinction since Jordan Barnett in 2014 and just the third since the award began in 1985. He’s the first Cadet to earn the national accolades and plaudits since Larry Hughes in 1997. Hughes was CBC’s first All-Metro player of the year.

Love signed with the University of North Carolina in November and became the first player from Missouri to do that since Poplar Bluff’s Tyler Hansbrough in 2005.

Love averaged 27 points, 6.4 rebounds, 2.9 assists and 2.5 steals as CBC went 21-7 against a schedule loaded with the toughest teams CBC coach Justin Tatum could find. CBC played just four home games this season, all against Metro Catholic Conference rivals. It played showcase games in Chicago, Evansville, Kansas City and Texas. It won at Illinois Class 3A defending champion East St. Louis as Love scored a career-high 42 points. He followed that up with another 40-point performance when CBC won at Cardinal Ritter, the eventual Class 3 champion. It was a tour de force that showed just how much Love improved after an excellent junior season that saw him average 19.4 points and 4.3 rebounds.

"It was 80 to 90 percent growth," Justin Tatum said. "From junior to his senior year there was no more scratching your head. He was a pro. It was unbelievable the jump he made mentally and physically. It made his skill level, which he always had, that much better."

There were hiccups along the way. The Cadets lost three of their first five games, all to out of town teams. They lost to St. Louis Christian, 59-55, in a semifinal at the Legends of Winter Roundball Classic at St. Louis U. High. De Smet ended a 16-game losing streak to CBC on Jan. 10. The next day, Chicago’s Whitney Young rallied past CBC as Duke-bound standout DJ Steward went off for 40 points and tied the Highland Shootout record for most points in a game. It was the only time this season CBC lost consecutive games.

The Cadets lost just once more — Feb. 18 at Vashon — and were starting to peak as the calendar turned to March. CBC won its last six games. It beat De Smet to all but clinch consecutive outright Metro Catholic Conference titles for the first time in at least two decades. It then beat De Smet again to secure its fifth consecutive district championship. The Cadets took down Hazelwood Central as Love went off for 40 points in a sectional.

He saved one of his best performances for last. Love was clutch as he scored back-to-back tough buckets in the final four minutes to rally CBC past Howell in the quarterfinal. It was Howell’s second loss of the season and gave the Cadets consecutive state semifinal berths.

But even the quarterfinal win wasn’t what it could have been. Instead of playing in front of a sold-out Hyland Arena on Lindenwood University’s campus, the game was moved to Francis Howell Central and played before limited spectators due to threat of coronavirus.

Love would have played it at Fairgrounds Park if that’s what it took to keep his season alive.

“I definitely put my all out there for my teammates and my coaches,” Love said. “I wish we could finish it off.”

Tatum took the cancellation of the tournament hard because he knew his seniors would never have another shot. He wrote them a lengthy email expressing his appreciation for what they had accomplished in their four years.

"I told them how proud I was to be a part of that," Tatum said. "It was challenging for me to write that to them."

Love was a part of four district championships, back-to-back MCC championships, consecutive state semifinal appearances and recognized by every national organization that highlights the nation's top players. In the moment it all feels so hollow because of how it ended.

Tatum experienced all those all-American games first hand with his son, Jayson. Knowing Love won't get that opportunity is heartbreaking.

"It hurts in general knowing Caleb and his parents won't get a chance. I enjoyed every minute of it with Jayson," Tatum said. "All you can do is support (Love). I told him to remember the accolades because that's something they can't take away."

Love takes little solace in experiencing the state championship game as a junior. Losing to Rock Bridge 63-59 only fueled him and his teammates to return. Having that opportunity taken away through no fault of their own just makes it cut deeper.

“We knew we could do it this year,” Love said. “We fought back this year, we fought through every adversity we had and not being able to make it is what hurt the most.”

The All-Metro player of the year, the 6-foot-4 Love averaged 27 points, 6.4 rebounds, 2.9 assists and 2.5 steals per game. He scored 40 point or more three times. Joined Larry Hughes as the second CBC player to surpass 2,000 career points. Love was selected as a McDonald’s All-American, a Jordan Brand All-American, a member of Team USA’s Nike Hoop Summit, the Missouri Gatorade player of the year, Mr. Show-Me Basketball and Class 5 player of the year by the Missouri Basketball Coaches Association. Signed with North Carolina.

The unquestioned leader of the Wolverines, the 5-foot-10 Russell was their floor general and best perimeter scorer. Russell averaged 15.7 points and 4.5 assists while shooting better than 56 percent on 3-pointers. A Class 4 all-state selection by the Missouri Basketball Coaches Association.

The 6-foot-6 Fletcher averaged 20.6 points, 9.8 rebounds and 2.7 blocks against the toughest schedule in Missouri. A Class 4 all-state selection by the Missouri Basketball Coaches Association.

The 7-foot Kalkbrenner averaged 16.3 points, 11 rebounds and 5.7 blocks per game. A Class 3 all-state selection by the Missouri Basketball Coaches Association. Signed with Creighton.

A 6-foot-7 forward, Clark was an all-around force as he averaged 14.1 points and 8.5 rebounds as the Lions won the Class 3 championship. A Class 3 all-state selection by the Missouri Basketball Coaches Association.

The best all-around player on Mehlville’s best team, the 6-foot-7 Daughtery did a little bit of everything as he averaged 15 points, 8.4 rebounds, 2.4 assists, 2.1 steals and 1.4 blocks per game. A Class 5 all-state selection by the Missouri Basketball Coaches Association. Signed with Mineral Area College.

The 7-foot Bradford had a career-best season as he averaged 14.8 points, 8.5 rebounds and 3.2 blocks per game. A Class 5 all-state selection by the Missouri Basketball Coaches Association. Signed with Kansas State.

The 6-foot-3 Fleming was the most consistent scoring threat for the Class 3 champion Lions. Averaged 18.7 points, 3.7 rebounds and 1.2 steals per game. A Class 3 all-state selection by the Missouri Basketball Coaches Association.

The 6-foot-8 Reed emerged as a force for the Red Devils, averaging a team-high 14.8 points and 8.3 rebounds per game. A Class 5 all-state selection by the Missouri Basketball Coaches Association.

The 6-foot-3 guard averaged 23.1 points, 4.5 rebounds and 2.9 assists per game while hitting on nearly 40 percent of his 153 3-point attempts. Scored a career-high 40 points against Taylorville. A Class 3A all-state honorable mention.

A 6-foot-5 forward, Zurliene averaged 16.1 points, 5.7 rebounds and 2.2 blocks per game to lead the Knights to a Class 2A semifinal. A Class 2A second-team all-state selection. Signed with Purdue University Northwest. 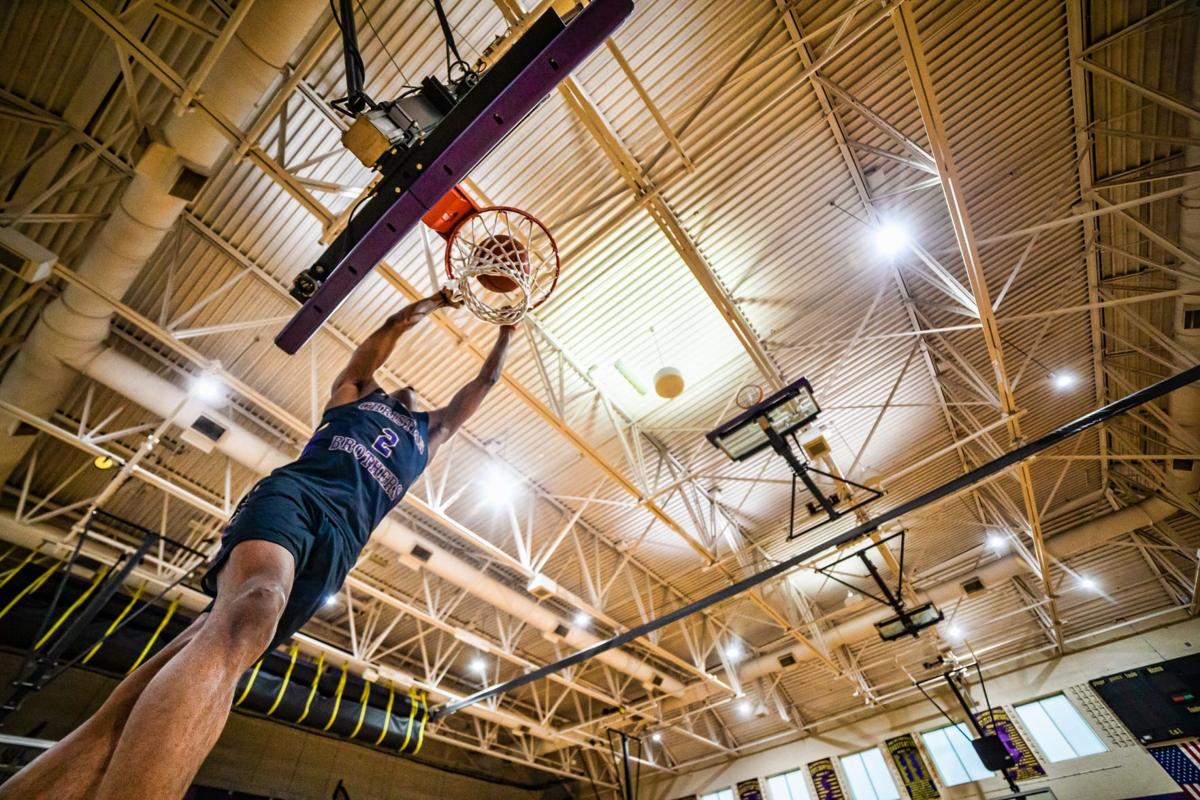