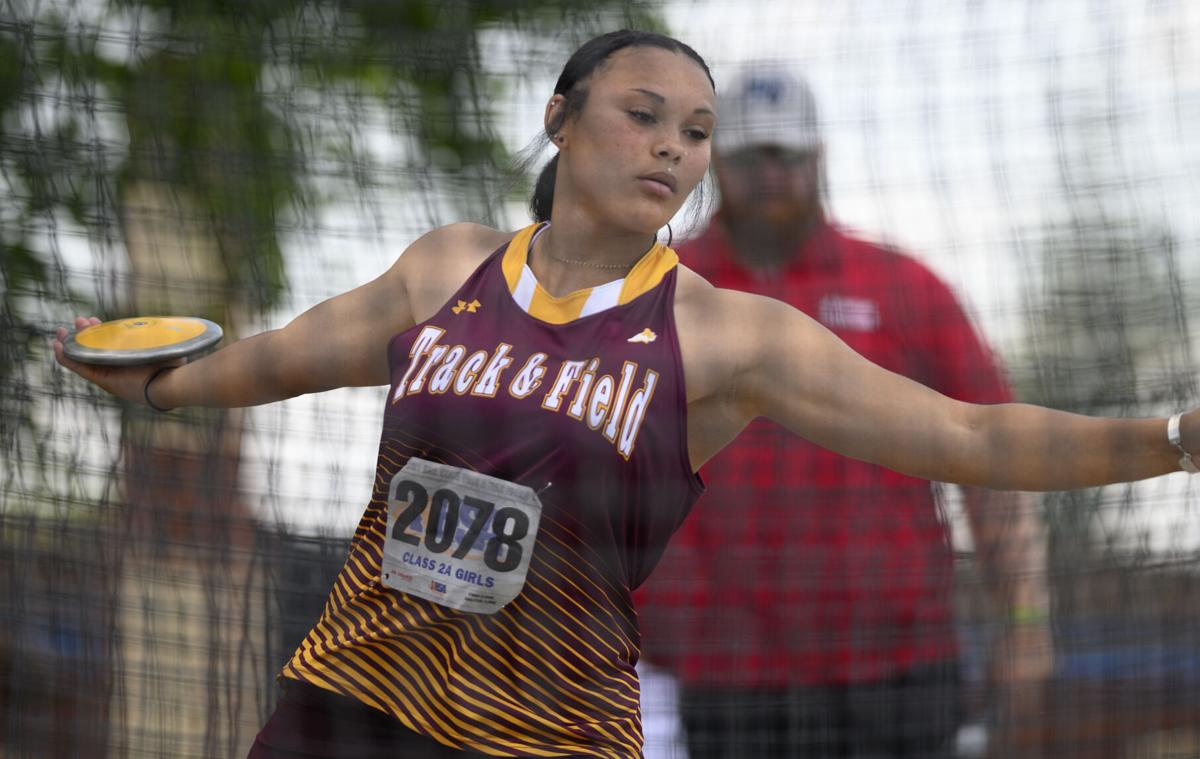 Wood River's Jayden Ulrich is the Post-Dispatch All-Metro girls track and field athlete of the year. The Indiana University signee set new Illinois records in both shot put and discus this spring during her dominant senior season. Paul Halfacre, STLhighschoolsports.com 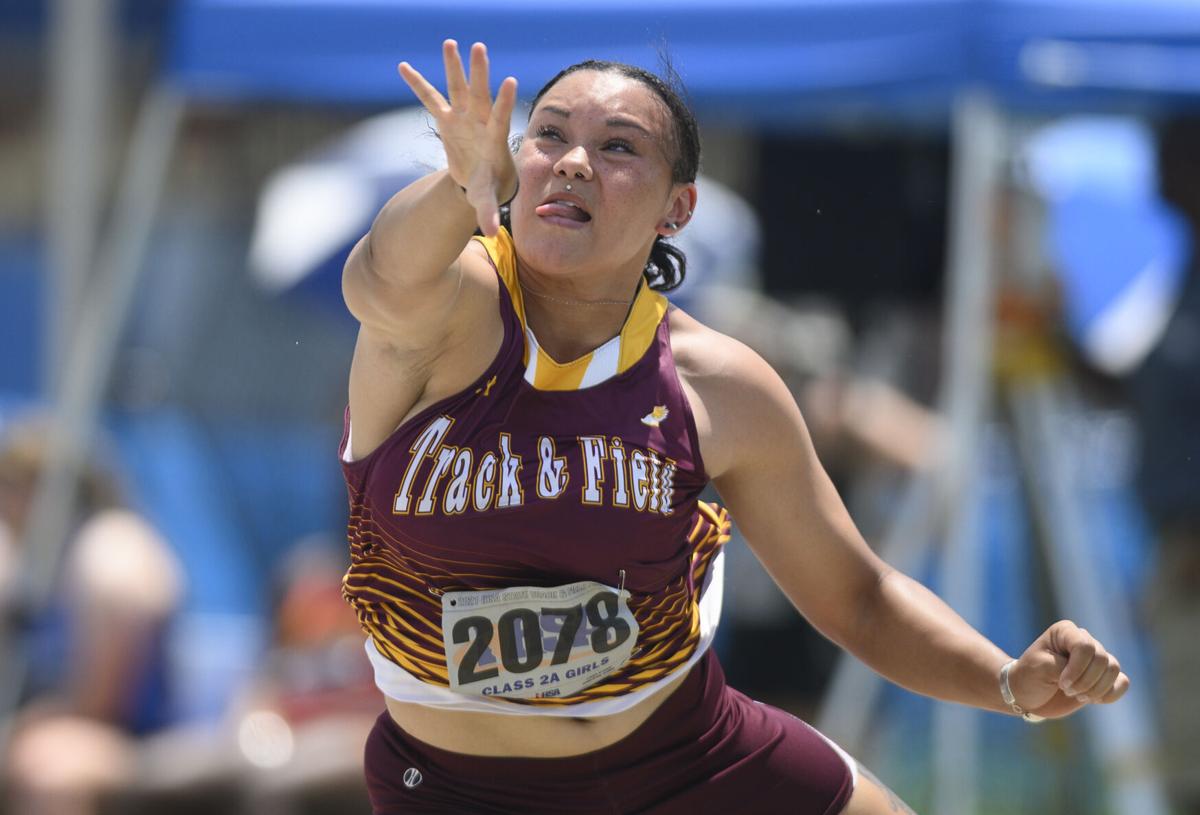 The morning after Jayden Ulrich was crowned prom queen, she bench pressed 200 pounds.

The greatest track and field athlete to walk the halls of Wood River High, Ulrich showed up to her upper body workout that Sunday and celebrated by ripping through her routine, which included benching 200 pounds twice.

“There’s not another prom queen in the America that can do that,” longtime Wood River track and field coach Russ Colona said.

There are few in the nation who can do what Ulrich has done, and none of them live in Illinois. A recent graduate, Ulrich capped her magnificent high school career by claiming Class 2A state titles in the shot put and discus, earning All-American honors (again) and — along the way — setting overall state records in both events.

Ulrich’s utter dominance makes her the choice for Post-Dispatch All-Metro girls track and field athlete of the year.

The 5-foot-8 powerhouse competed in 18 meets as a senior and went undefeated. It wasn’t until last week at the National Throws Festival in suburban Cleveland that Ulrich found herself trailing on the leaderboard. Ulrich had the lead in the shot put heading into the final round of attempts. Schuylkill Valley’s Ashlyn Giles, who dominated Pennsylvania much like Ulrich did Illinois this spring, went ahead on her last throw.

“She was beating me by two inches,” Ulrich said.

On her final attempt, Ulrich unleased a put of 49 feet and 4.5 inches to win by nearly half a foot.

When it came time to compete in the discus, Ulrich treated a collection of the nation’s best throwers like she treated her home-state competition all spring.

She let them battle for second place.

With rain falling and puddles in the throwing ring, Ulrich let loose a throw of 167-8. It was a full 19 feet better than Giles, who was the runner-up.

That’s the same Giles whose personal best throws this year ranked ahead of Ulrich on Milesplit’s national leaderboard in both discus and shot put.

“She loves a challenge,” Colona said.

The toughest challenge Ulrich faced this spring was finding a way to bring the best out of herself when none of her competitors could push her.

Ulrich set the state discus record May 26 when she hit her personal best of 168 feet, 1.75 inches, at the Popeye and Olive Oyl Invite in Chester. It broke Illinois' old record of 167-8 set by Edwardsville legend Emmonnie Henderson in 2013.

No other thrower in the state came within 18 feet of her.

With no one to make her sweat, Ulrich had to compete with herself.

“It is really hard not being able to have someone push you physically,” Ulrich said. “It’s a mental battle between you and yourself.”

Ulrich has the disposition to be successful in those situations. She’s driven to excel. When the coronavirus pandemic canceled spring sports last year and put much of the nation into quarantine, Ulrich continued to prepare for whatever was next — be it her senior year or the start of her collegiate career. Ulrich signed with Indiana University in November, when there was no guarantee spring sports would return.

“We probably only missed two weight days the last two years,” Colona said. “We lift four times a week and throw six days a week. We make it work. We have a lot of laughs out there.”

Ulrich and Colona will get the chance to have a few more laughs as they prepare to compete June 30-July 3 in the Nike Outdoor Nationals at historic Hayward Field in Eugene, Oregon, on the campus of the University of Oregon.

The competition should be the best Ulrich has seen during her decorated high school career. Colona thinks it will bring the best out of her.

“When she gets excited hopefully we’ll see something really good,” he said.

Ulrich is tickled by the chance to compete at nationals for the second time; the first was after her sophomore year when she won her first state championship in the shot put. But what makes it even more thrilling is that she’ll be in the same throwing ring being used during Team USA’s Olympic qualifying meet this week. It’s the same ring where the men’s shot put world record was set last week by Ryan Crouser.

“It’s going to be a huge honor to throw in that ring,” Ulrich said. “I feel like going out there I’ll have the mentality that (the Olympic trial competitors) did what they wanted to do and now I want to do what I came to do.”

The most dominating athlete of the season, Ulrich set an Illinois state record in the discus with a throw of 168 feet, 1.75 inches, and the shot put with an effort of 51-10.75. She won the Class 2A state championships in both events and set a new state meet mark of 168-7 in discus. Signed with Indiana.

Set the Class 2 state record in the 400-meter race when she won in 56.17 seconds. Won the 800 title in 2:20. Helped Bulldogs win state team championship. Raced to the second-fastest 800 time in the state this season when she went 2:08.51 at the Festival of Miles. Signed with Arkansas State.

Won the Class 4 triple jump with a leap of 39 feet, 10.75 inches. Finished third in the 100-meter hurdles (14.39) and ran legs on a third-place 800 relay and fifth-place 400 relay to help Trinity claim the team state championship in the school’s final athletics competition.

The nation’s top javelin thrower, Juszczyk won the Class 4 state championship with a throw of 151 feet, 10 inches. Unleashed country’s No. 6 all-time best javelin throw with her toss of 177-11 at the Border War Championships in April. Sixth in triple jump (35-1.25), sixth in 100-meter hurdles (15.52 seconds) and ran a leg on Trinity’s fifth-place 400 relay at state. Signed with TCU.

Won the Class 5 3200-meter state championship in 10 minutes and 41.08 seconds, the fastest time in Missouri this season. Also ninth in the 1600. Ran on Lafayette’s state champion 3200 relay team.

Claimed the Class 5 state high jump title by clearing 5 feet, 7.75 inches. It’s her second state championship after she won the Class 4 title in 2019 as a freshman.

The Class 5 state javelin champion with a throw of 151 feet and 5 inches. Had a personal best throw of 163-5 at the sectional meet, which was second-best throw in Missouri and third-best in the nation according to Milesplit. Signed with Missouri to play softball.

Posted the fifth-fastest 100-meter time in Illinois this spring with a personal best of 12.07 seconds. Qualified for the Class 3A state meet in the 100 and 200.

Finished third in Missouri’s Class 5 800-meter run in 2 minutes and 16 seconds. Earned state medals as part of Wildcats’ runner-up 3200-meter relay team and its 1600-meter relay, which was eighth.

Finished second place in the Illinois Class 3A state meet 100-meter hurdles in a personal best of 14.06 seconds. Also qualified for the state meet in the 100-meter dash.

Finished third in the Class 5 pole vault by clearing 11 feet, 10 inches. Her personal best of 12 feet, 3 inches, was the fourth-best vault in Missouri this season.

Helped Ritter win Class 5 state team championship by finishing fifth in triple jump with a leap of 36 feet, 3 inches. Also was eighth in the high jump by clearing 5-4.5. Took fourth in the 100-meter hurdles in 46.06 seconds.

The Class 5 state meet discus runner-up with throw of 141 feet, 2 inches. Second in javelin with a throw of 134-5. Qualified for state meet in shot put but did not medal. Her personal best javelin throw of 143-3 was fourth-best in Missouri.

The nation’s top javelin thrower, Juszczyk won the Class 4 state championship with a throw of 151 feet, 10 inches. Unleashed country’s No. 6 a…

Wood River's Jayden Ulrich is the Post-Dispatch All-Metro girls track and field athlete of the year. The Indiana University signee set new Illinois records in both shot put and discus this spring during her dominant senior season. Paul Halfacre, STLhighschoolsports.com 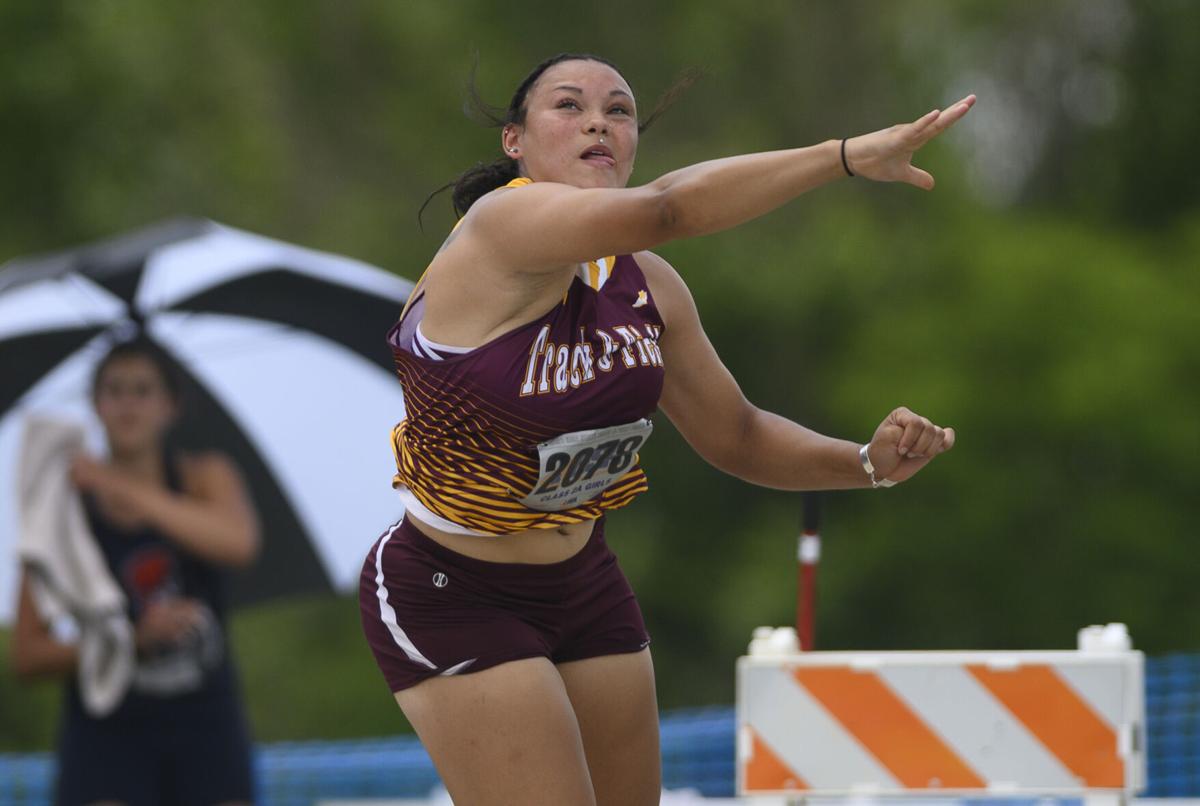